TRAINSPOTTER: Bow down before the President King – The Future according to the ANC 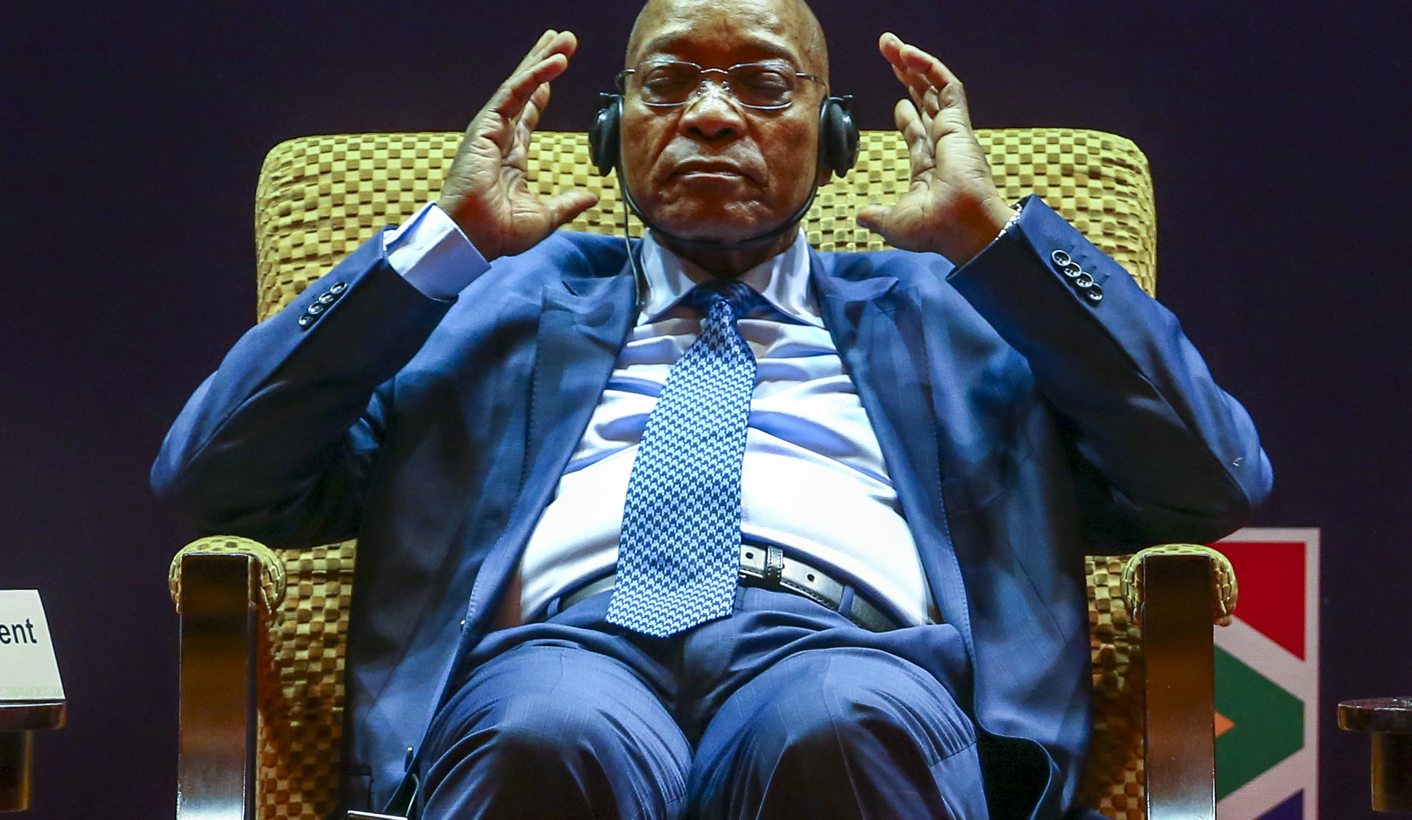 The African National Congress on Sunday presented the party faithful (and, by extension, the media) with a “road map” to the National Policy Conference, which will be held in June 2017. They dumped nine hefty policy discussion documents on their beleaguered comrades, the upshot of which was: the president does not have enough power. And so the first act of a monster movie unfolds, during which the nutty National Executive Committee crosses a crocodile with an Airbus A380, and mayhem ensues. By RICHARD POPLAK.

As is the nest, so is the bird, wrote the French historian Jules Michelet. As any ornithologist – or any political analyst, for that matter – would argue, the reverse is also true: as is the bird, so is the nest. Here in South Africa, the ANC’s Big Bird is a cynical crook with some really evil friends – a man who has transformed his political party into a low-rent Cosa Nostra, but without all the delicious pasta.

Question: Where in the world would one find a weirder wannabe dictator than Jacob Zuma? Unlike strongmen like Putin or Erdo?an or Duterte, the president has no real appetite for large-scale military head-cracking, and nor is he interested in developing a personality cult that would outlast his tenure. Unlike Trump (or, rather, Trump’s advisers), he has no ideological outlook, insane or otherwise, nor does he possess a vision for the country that will result in a glorious future for his volk.

All he wants is the contents of the Treasury.

For any organisation that hopes to sustain itself after the ruinous administration of someone like Jacob Zuma, his administration offers an abject lesson regarding the drawbacks of unlimited executive power. The South African Constitution was designed to place checks and balances on presidential authority, but no constitution can serve as a stopgap against a president who refuses to understand how it serves as the national ligature – as the very thing that binds us, that allows us to be. Zuma understands that the Constitution is like God, or money, or any other abstract system that demands total and unanimous societal buy-in: we either believe with unalloyed enthusiasm, or the entire village green is razed to the ground.

We are right at the cusp of the razing. (South Africa is always right at the cusp, but still.) And so we are caught in this never-ending lockstep of presidential parry and legislative or judicial or media counterpunch. The president enjoys the prerogative of picking a Cabinet, the members of which appoint the heads of state-owned enterprises, who in turn tender the contracts that build the nation. This is the basic nexus of the patronage system, and much of South Africa’s energy is expended in trying to exploit that nexus, or keeping the exploitation from subsuming us. In adopting a road map to June’s National Policy Conference, the ANC’s National Executive Committee has proposed a way to solve this intractable nightmare:

Give the president more power.

This is actually not a joke.

Before we get too carried away, it is important to keep in mind that the nine proffered “discussion documents” do not, at this stage, reflect ANC policy. It’s equally important to note that the paperwork does, however, reflect the thinking of the best and brightest of khongolose’s leadership. Like flagons of Blue Loo, the discussion documents will flush their way into the National Policy Conference at the Gallagher Estates in June, and will then be hosed into the National Conference in December, all in the hope of disinfecting the ANC from, well… the ANC.

So there is still time for someone to slap some sense into the party’s national executive committee. But, as ever, they appear to be impervious to sense, if not to self-interest. And there is much self-interest contained in these policy discussions. On the surface, the nine papers wonkishly concern topics such as Strategy and Tactics, Economic Transformation, and Legislature and Governance. They are inward looking, at times remarkably self-reflective, and refer constantly to the National Development Plan, the official foundation of current ANC policy.

Critically, they don’t concern any of Zuma’s current pretend policy obsessions, such as land expropriation without compensation – a fact that inadvertently adumbrates how power works in the ANC. Zuma does not have power to do anything, because he wields power for power’s sake. Nothing gets done; nothing can get done; nothing is meant to get done. As Fikile Mbalula, in his capacity as NEC head of organisational renewal, put it on Sunday: “We are preparing to remain in power forever. And that is not a statement of arrogance.”

So what, then, do these policy discussions propose? Many, many things. But above all, they envision a presidency that would serve as a “strategic centre of power”. The newly enhanced Super Führer would develop policy with some input from the NPC, and would also determine how resources are allocated when policy is implemented. No longer would the regent president be required to defer to either the NEC or to the Treasury to drive through, say, “radical economic transformation”, or nuclear as the keystone of energy policy. A “mandating paper” would determine the flavour and content of the annual budget; the SOEs would be brought closer to the office of the president.

None of this is new, but what’s so striking about this latest attempt at creating Nazi Germany is that people as ostensibly divided as Cyril Ramaphosa and Bathabile Dlamini will collectively sign off on the following grandiloquent cretinism: the president will cease abusing power when the president accrues all of the power.

In parsing the intentions the NEC, we should not confuse the likes of Jesse Duarte or David Mahlobo or Faith Muthambi with your average South African democrat. They are cheered by the fact that the president of South Africa is not elected by the people of South Africa, but by Members of Parliament. The head of state carries no individual mandate, but rather enacts the mandate determined by the party that holds (or negotiates) a majority in the National Assembly. So the trick is this: insinuate yourself into the winning faction within the ruling party; ensure that the president of the party emerges from within your faction; use every dirty tactic in the playbook to scrape through with 51% of the seats following the 2019 National Elections; fold all of the decision-making/resource allocation powers of the state into the presidency.

And then get paid.

This gives lie to the earnest cri de cœur woven into in the policy discussion documents, which excoriate the Zuma-era ANC for the rampant corruption, for the promotion of factionalism, and for the general and blanket deployment of idiocy. The documents basically admit to the fact that the last decade has been one long, endless shit-show, and that without wholesale realignment, the ANC will probably not make it to its 107th birthday. The cure, they insist, is to double down on executive power.

As is the nest, so is the bird. If these proposals are adopted by the ANC in June – and there’s no reason to think they won’t be – the nest will get messier, and the bird will become vastly more powerful.

Big Bird, soon it will be your time to fly! DM