ANC Policy: Old proposals in new wrapping paper, with a dash of perfume 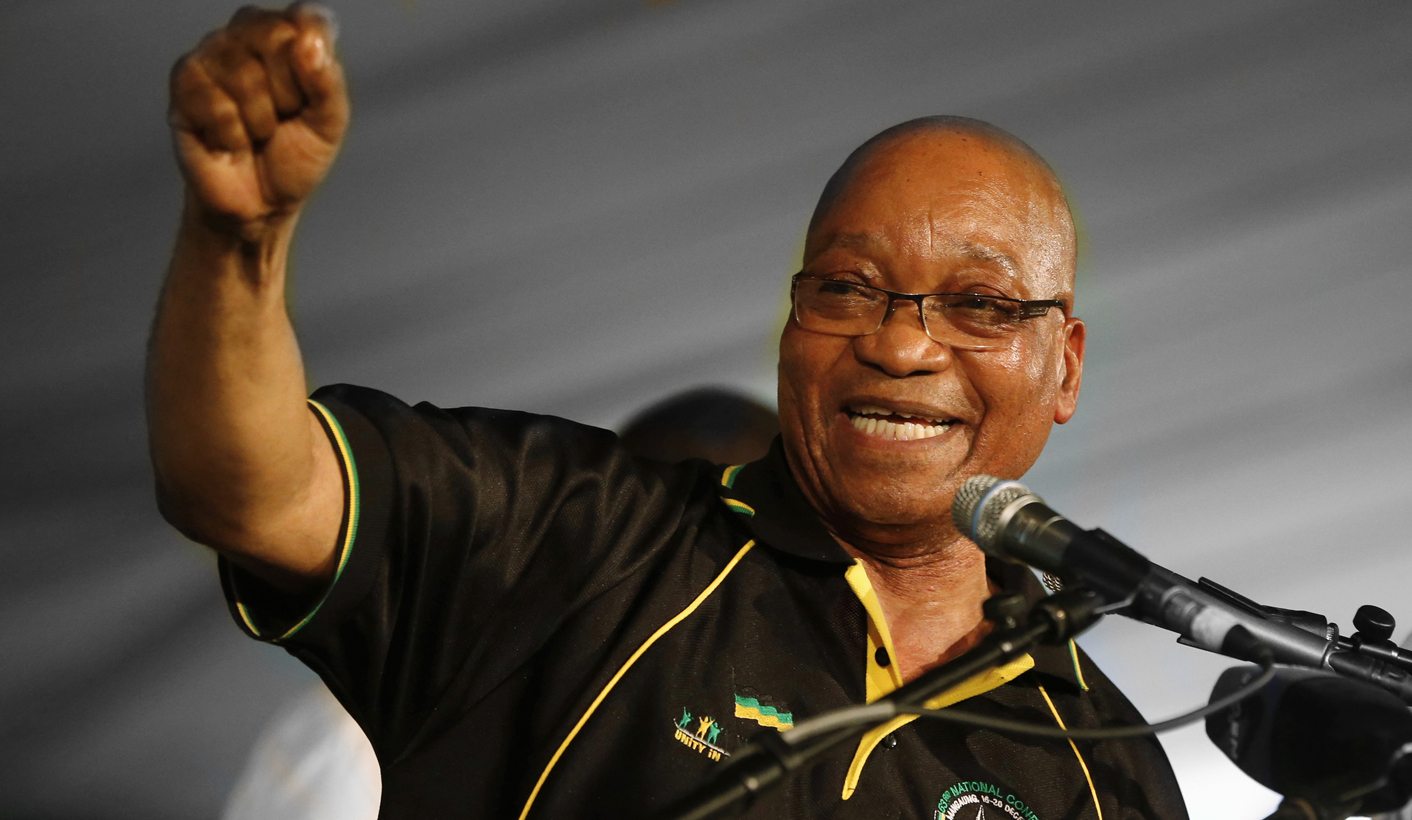 The ANC does a superb job of navel gazing and self-criticism. It seems almost cathartic for the ANC to diagnose its internal problems and society’s growing disenchantment with it. The nine discussion documents released on Sunday in preparation for the ANC’s fifth policy conference in June are largely a rehash of previous policy proposals. But all these, plus some new remedies such as a review of its electoral processes, can only be implemented if adopted at the party’s December national conference. This does not help this year’s messy election campaign that is likely to produce leaders and outcomes the ANC is warning itself against. By RANJENI MUNUSAMY.

Speaking at an ANC media briefing on Sunday about a proposal for the establishment of a “revolutionary electoral commission”, ANC national executive committee (NEC) head of organisational renewal Fikile Mbalula said this was not something new. “We simply dusted it from the cupboard and have given it new perfume.”

That is essentially what the ANC has done with many of the policy proposals in its nine discussion documents released for public discussion. They have taken ideas and proposals that came up at previous conferences and repackaged them, providing the rationale in the current context.

Some of the new proposals include strengthening the Presidency as the “strategic centre of governance”, and vesting it with the core functions of state policy and planning, resource allocation and prioritisation, cooperative governance, public administration and performance enforcement. This will create somewhat of a “super presidency”, incorporating functions that are currently assigned to other departments.

While ANC policy head Jeff Radebe said the idea was to strengthen the capacity for the implementation of the National Development Plan (NDP), a beefed up presidency with “resource allocation and prioritisation” powers would give it more sway over the National Treasury and decision-making in the budgetary process. If approved by the policy conference and adopted at the ANC’s 54th national conference in December, the changes could come into force from next year. It would mean that whoever becomes president in 2019 would take control of a mega presidency.

The legislature and governance policy document also proposes a dedicated department for state policy and planning to coordinate planning functions in all organs of state. The document says a presidential commission on provinces, proposed previously to assess how many there should be and new possible boundaries, should be fast tracked and finalised by the end of the current administration. This could be in anticipation of the ANC haemorrhaging further at the polls and thus losing control of some of the provinces.

Also in anticipation of reduced support in future elections, the document says the ANC must prepare itself for the “complicated relationships” involved in coalition governments. ANC legislature and governance subcommittee chairperson Ayanda Dlodlo said the party needed to discuss “what is negotiable and what is non-negotiable” in such eventualities. But while some in the ANC are preparing for further electoral losses, others are more optimistic. Mbalula told the briefing: “We are preparing to remain in power forever and that is not a statement of arrogance”.

“Internal squabbles, money politics, corruption and poor performance in government all conspire to undermine its legitimacy in the eyes of the broader public. Some progressive formations and individuals who historically have been part of the broad front of forces for change are challenging the movement on important current issues, particularly corruption.”

“Rampant selfish interest, in broader society and within the liberation movement, [is] the stock-in-trade. More and more, an impression of reliance on security agencies is taking root. Instead of being the centre of transformative and ethical rectitude, increasingly the ANC and the government it leads have occasionally to be directed from elsewhere – in the manner of ‘lawfare’ – to do right. The moral suasion that the ANC has wielded to lead society is waning; and the electorate is starting more effectively to assert its negative judgement,” the document states.

It said many “negative tendencies” have crept into the conduct of ANC members and leaders.

“Now, deviant conduct has become deeply entrenched; and arrogance, factionalism and corruption have been identified by large sections of society, including ANC supporters, as dominant tendencies within the movement. Gate keeping, money politics and fraud characterise most ANC electoral processes. Underhand practices increasingly define interactions between various spheres of government and the private sector; and private interests seek to capture and control not only state organs, but also the ANC itself.”

With regard to the ANC’s electoral processes, the document said lobbying processes engineered by “clandestine factionalism” destabilises the organisation. “The perception that lobbying is prohibited creates favourable grounds for destructive factionalism.” It is proposed that there should be more open contestation for ANC leadership positions, informed by guidelines and transparency.

The proposed “revolutionary electoral commission” that would screen candidates who make themselves available for elections should be composed of “time and tested cadres who are objective”. It should have a “dynamic relationship” with the ANC deployment committee, the document says.

But often in the documents, the ANC envisages the ideal rather than the reality. The ANC’s deployment committee, for example, is currently quite dysfunctional with President Jacob Zuma and his faction holding most of the powers to appoint members of Cabinet and heads of state-owned enterprises. It is also idealistic to talk about involving “time and tested cadres” in the selection process for good public representatives when the ANC’s stalwarts and veterans, who are the epitome of “time and tested cadres”, are disrespected and disparaged when they raise concerns about the “crisis” in the organisation.

Radebe said even if all the proposals for the review of the electoral processes and leadership selection were approved at the policy conference, they could not take effect until adopted at the national conference in December. This means that the current electoral processes, which Mbalula described as an “absolute mess”, would continue, guaranteeing an escalation in factional warfare and underhand campaign tactics.

Head of the ANC’s communications subcommittee Jackson Mthembu said it was “ill discipline” for anyone to be campaigning for candidates when this had been prohibited until after the policy conference. The ANC did not respond to a question about whether its women’s league president Bathabile Dlamini would face disciplinary charges for continuing to flout the NEC directive in this regard by campaigning for presidential hopeful Nkosazana Dlamini-Zuma.

The chairperson of the NEC economic transformation subcommittee Enoch Godongwana admitted the ANC did not have new policy proposals on land. In line with Mbalula’s earlier analogy, he said they had simply “perfumed” previous policy documents. The ANC was looking at more taxes for unoccupied land or land bought for speculative purposes to force owners to sell these to the state, he said.

Naledi Pandor, the head of the ANC’s education and health subcommittee, said people were mistaken to assume that the land redistribution problem could be resolved by amending Section 25 of the Constitution. She said the Constitution was structured as a package and changing one clause would not have the outcome some people envisaged.

On the hot button issue of funding for higher education, the ANC says a new financial support model for poor, working class and middle strata students must be finalised and fully implemented by 2020. There is no proposal for free education as demanded by students.

The ANC is proposing that the South African Revenue Service assist to recover money from the former beneficiaries of the National Student Financial Aid Scheme (NSFAS). Pandor said improved systems were needed to reach NSFAS beneficiaries so they could begin repaying their loans.

The one thing that seems particularly urgent for the ANC is the establishment of a media appeals tribunal (MAT). While all the policy proposals have still be discussed and approved, the document on communications says Parliament must undertake an enquiry into media accountability mechanisms “including the desirability of establishing [a] MAT and the possibilities of amending defamation laws without delay”.

“The parliamentary probe must be held before the June ANC policy conference,” the documents states.

Also to be implemented “without delay” is a print media empowerment charter to ensure transformation in the print media industry and the direction of government ad-spend towards community media rather than mainstream media. This is because some media mainstream media organisations have an “openly hostile stance to the ANC and its programmes”.

The communication document proposes that “the ANC and government must invest more in unmediated media platforms so that they can communicate directly with citizens and use innovative ways to push boundaries when communicating”.

So, in the ANC’s brave new world, its failed election black ops goes mainstream as they turn up the heat on the mass media. While the ANC provides a frank assessment of its internal problems, its leadership failures and governance shortcomings, it still believes that its reflection in the media is due to hostility.

Yet the thread running through the discussion documents is how bad the ANC has been at implementing its policies and programmes that were adopted in the past. It remains to be seen how many of the current proposals make it through the policy conference and whether they will matter when the ANC is devouring itself at its elective conference.

By December, its old policies might not be the only things needing to be dusted off and sprayed with perfume. DM