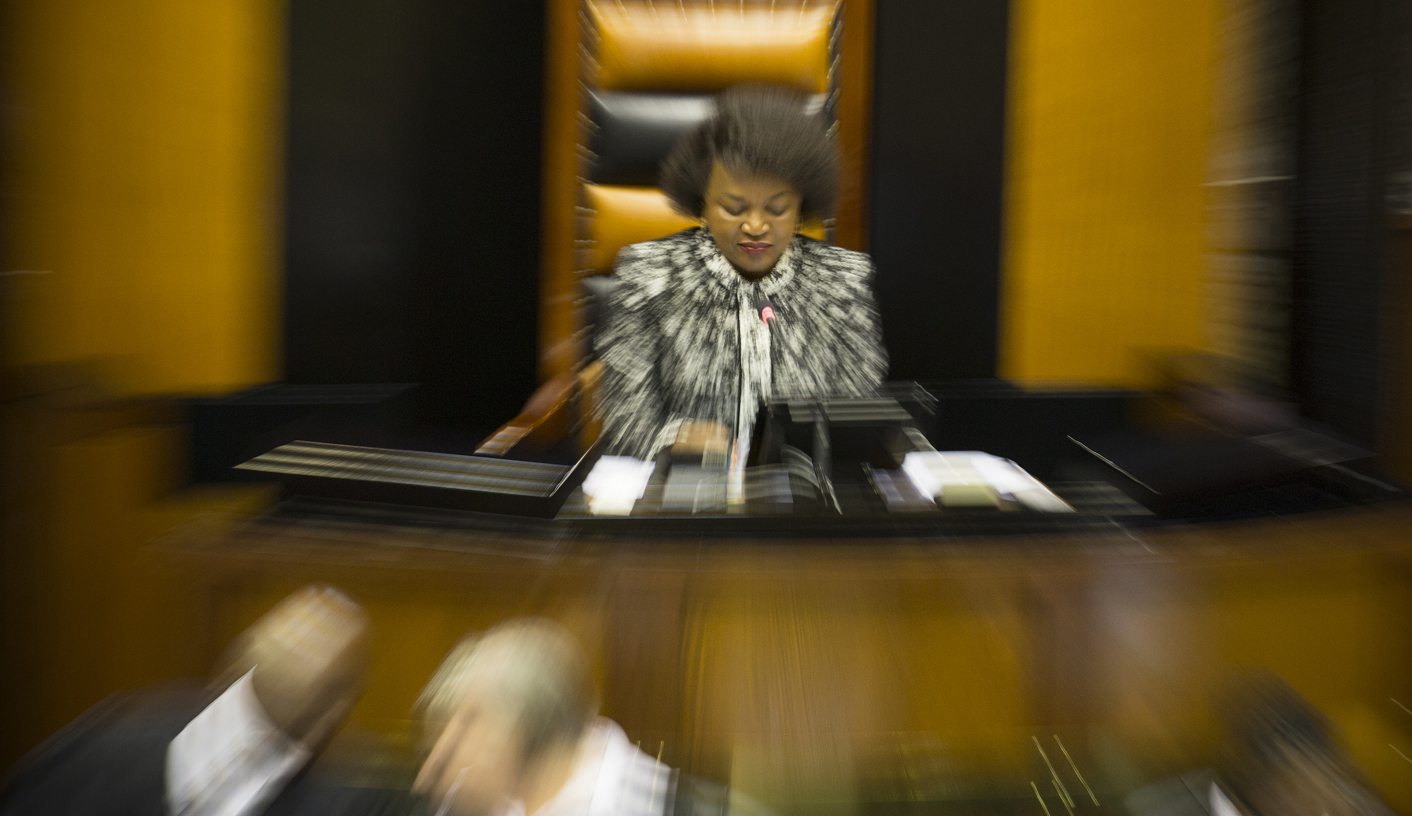 A wholesale review of Parliament’s structure is proposed in the ANC’s Legislature and Governance Discussion Document released on Sunday. Like the proposal to centralise policy, planning, co-ordination and resource allocation in the presidency through a proposed “department of state policy and planning”, the legislative review proposes centralisation: one Speaker of Parliament rather than the two presiding officers for the National Assembly and National Council of Provinces (NCOP) and making the ANC Chief Whip the Chief Whip of Parliament, rather than recognising all represented political parties’ chief whips. These are proposals that, if implemented, require constitutional changes. By MARIANNE MERTEN.

The ANC’s Legislature and Governance Discussion Document meanders from retaining political power “to preserve our democratic legacy and accelerate socio-economic transformation” to arguing that corruption must be “exposed and swift action taken, regardless of the seniority of the people involved”, and wants to see state-owned entities (SOEs) as drivers of the developmental state and a single public service, whose members, like elected public representatives, “at all levels are barred from doing business with the state”.

It’s a wide field and, particularly, on inter-governmental relations a measure of frustration emerges not only between the lines. “The inter-governmental relations system reflects design issues hampering the effectiveness of the three-sphere system. Importantly, many of the issues relate to the shortcomings in the human capital skills, leadership, commitment and accountability,” says the discussion document.

Amid this come the proposals for a review of how Parliament is structured politically – and a review of the National Council of Provinces (NCOP) as “an opportunity to reconfigure the House, or rather, repositioning the future role of the NCOP”, including making traditional leaders as “part-time participants” as per their request to interact with legislative processes.

Other structural changes with constitutional implications are raised in the proposal that, as there is just one secretary to Parliament to head the administration, there should be one speaker of Parliament as the institutional political head.

“The three arms of state are each led by a single office as prescribed by the Constitution, except for the legislatures. The executive and government are led by the state president [Note: the Constitution talks of “president”, not state president], the judiciary by the chief justice, while legislatures are led by the speaker of the National Assembly and chairperson of the NCOP. The consideration of the political institutional head of Parliament as a speaker of Parliament must be resolved upon.”

Yet the reason there are two presiding officers is because there are two separate houses, each with its own constitutional obligations. While Section 42(3) of the Constitution states that the National Assembly is “elected to represent the people and to ensure government by the people” and thus elects the president, the NCOP “represents the provinces to ensure provincial interests are taken into account in the national sphere of government”, according to Section 42(4).

Both the National Assembly and NCOP are constitutionally enshrined to establish joint rules and joint committees in Section 45 to facilitate the legislative process – and their relationship.

To say, as the discussion document does, that Bills referred back to Parliament have “mainly been on procedural flaws in the NCOP cycle in passing legislation, which is the lack of proper public participation” is tantamount to simplifying a complex process that not only has to deal with different levels of capacity in different provinces, but also contending interests among provinces and within the governing ANC factions in eight of the nine provinces. The Western Cape is governed by the DA, where contending interests play out to a different script.

The NCOP has long struggled to secure the regular and active participation of the South African Local Government Association (Salga) – it has 10 part time participants – and that of the four special provincial delegates, including the premier or his or her representative. The other six members of a provincial delegation, or the permanent delegates, are determined on the basis of a political party’s provincial electoral performance.

It’s seldom the NCOP puts its foot down. It did so in October 2013 when the majority of provinces refused to give their mandate to the then Traditional Courts Bill, touted as a sweetener to traditional leaders ahead of the May 2014 elections. Five provinces rejected the Bill outright and two others indicated they would abstain, thus effectively scuppering the draft legislation. It has since been substantially revised – the 2012 version was criticised for introducing an unconstitutional two-tier justice system – and reintroduced.

More recently the NCOP insisted on its constitutional role of approving provincial supervision of a non-performing municipality, effectively throwing a spanner in the wheel of provincial political machinations. While KwaZulu-Natal MEC for Co-operative Governance Nomusa Dube announced that Nquthu municipality would be placed under administration in terms of a provincial decision on February 8, the NCOP maintained this could not be done until it had considered the matter. Nquthu, finely balanced following the 2016 local government elections, has failed to elect a mayor, deputy mayor and speaker since that poll. The NCOP’s endorsement of the provincial decision came on February 24 in line with Section 139 of the Constitution.

But the ANC’s Legislative and Governance Discussion Document says that while celebrating the 20th anniversary of the establishment of the NCOP, “the constitutional role of the NCOP must be reviewed with the intention to strengthen the NCOP. Mechanisms must be developed to ensure NCOP plays a catalytic strategic role in articulating provinces and local government matters”.

This would take place alongside a recommended review of what the ANC document calls “legislative sector”. This assessment “must establish whether the legislative sector is appropriately configured, adequately resourced, optimally functioning and works co-operatively with other arms of the state across all spheres”.

As the Governance and Legislative Discussion Document argues, “the ANC must retain political power in order to preserve our democratic legacy and accelerate socio-economic transformation”, the ANC parliamentary caucus is styled as an electioneering tool.

“The ANC caucus must effectively use Parliament to regain the confidence of our people in the run-up to the 2019 elections,” says the discussion document, after stating earlier: “The ANC in Parliament will in both words and deed master the moral high ground, vigorously advance clean governance, champion the fight against corruption, shun incompetence and decisively deal with ill-discipline.”

But the discussion document is silent on key points in the governance and legislative sector. For example, Communications Minister Faith Muthambi now plans a legal challenge to Parliament’s hard-hitting report on its SABC inquiry. Adopted last week, it not only recommended probes into misspending and maladministration, but on the back of political interference also recommended that the president should seriously reconsider keeping her on in the portfolio.

And so the difference between discussion document sentiment and factional ANC politics permeating governance emerges as vast. DM