Bangladesh: An African Path to Prosperity?

Bangladesh: An African Path to Prosperity? 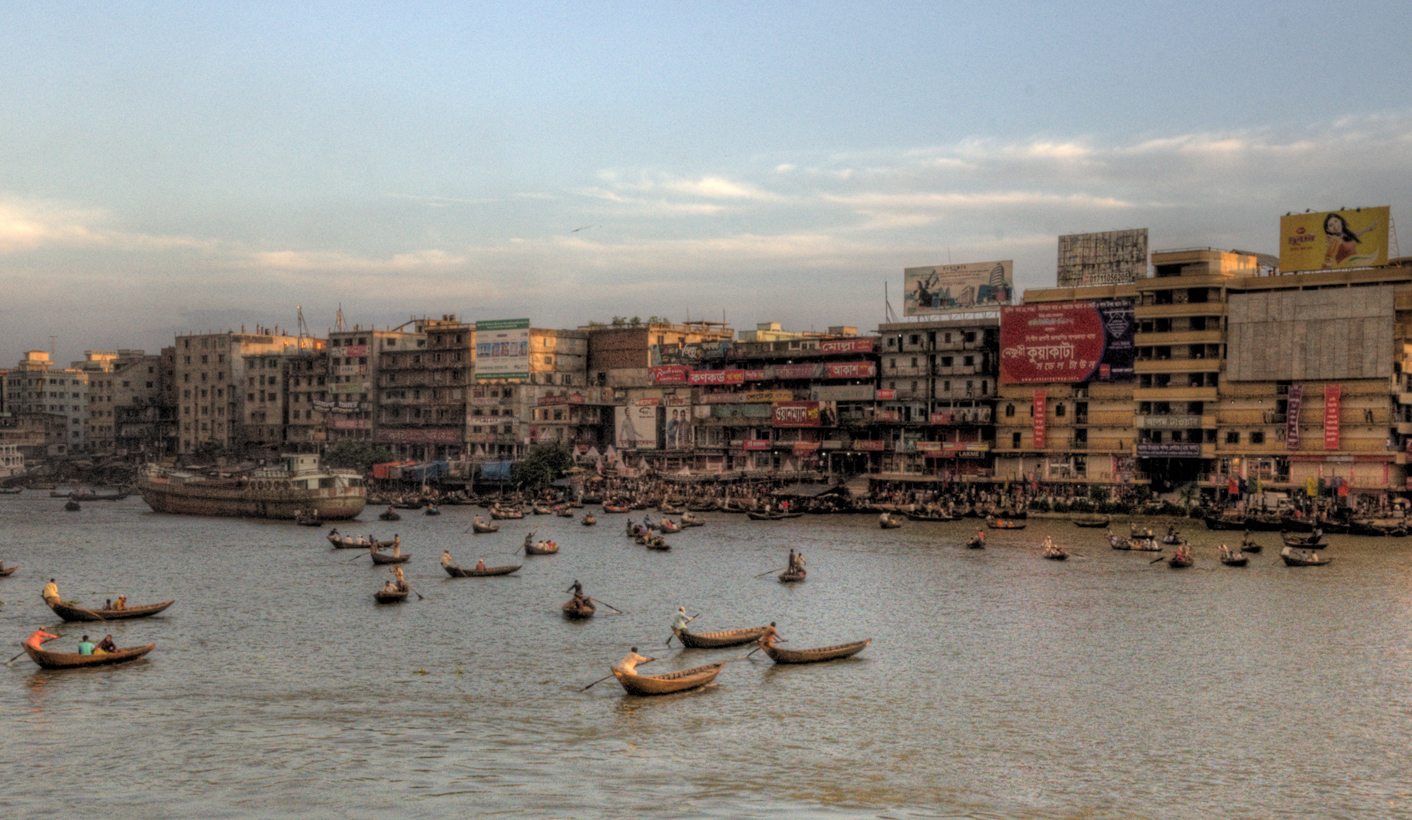 Commuters huddle on the top of the trains running through Dhaka. “That way,” says a local businessman, “they avoid the fare.” Inside, the carriages are jampacked, bodies spilling out of the open doors. Like all other modes of local transport, from the ubiquitous canopied rickshaws and green tuk-tuks to the lurching, blaring buses notable for their scraped bodywork and their unwillingness to slow down, it’s patently unsafe and user unfriendly. By GREG MILLS.

(All inside photos by Greg Mills in Dhaka)

Born as a country out of war in 1971 between Pakistan and India, Bangladesh remains beset by political volatility, endemic corruption, a weak infrastructure including power and transport, an obtuse and unhelpful bureaucracy, and sometimes unenthusiastic implementation of economic reforms. This environment is punctuated by occasional acts of violence, as was perpetrated by five gunmen from Jamaat-ul-Mujahideen in July 2016 in Dhaka, which resulted in the deaths of 20 mainly Italian and Japanese hostages.

At times it seems the challenges are less technical and political than biblical, however. More than 65% of today’s 160-million Bangladeshis are rural-based, accounting for half of all employment, rice their principal product, living at risk of floods, famine and much else.

For all of these and other glaring social, economic and political problems Bangladesh has made much progress over the last 20 years, when its economy grew at an annual average of 6%. Twenty-million people have, as a result, been lifted out of poverty. Life expectancy is up 10 years over this period, now at 72, reflecting better nutrition, higher incomes and increasing literacy.

It is a country with a feeling of wealth, energy and purpose.

Bangladesh’s route to prosperity is well-trodden by others across Asia. The more remarkable aspect is why African countries fail to follow it.

It has been built on improved agriculture yields and light manufacturing. Ready-made garments, known locally as RMGs, account for 80% of total exports. The sector earned $29-billion in 2016, employing 4.5-million. Bangladesh is the second largest clothes exporter worldwide behind China, two-thirds of its products destined for Europe.

This has driven GDP to increase almost fivefold from $46-billion in 1996 to $226-billion in 2016, and per capita incomes from just $360 to $1,190 during this period. Bangladesh met its lower middle-income country benchmark in 2015, ahead of predictions, and aims to get to middle-income status by the time of its 50th independence anniversary in 2021, when its garment exports are targeted to top $50-billion.

Inevitably, as the traffic bedlam and clogging smog exemplifies, it’s not always pretty and without costs.

The garment sector is hyper-sensitive to workers’ wages, the minimum a paltry $68 monthly, with steep production targets to feed consumer global demands for ever-cheaper clothes. That’s not all. A series of factory incidents have highlighted work conditions. In 2013 the Rana Plaza eight-storey factory collapsed, killing 1,130 people and injuring 2,500. This has led to consolidation in the number of garment factories, down from their peak of 5,000, though the number employed has risen overall.

Like Africa, Bangladesh faces the pressures of a youthful population. Population numbers have mushroomed from just 66-million at independence, with Bangladesh’s density nearing 1,000 per km2. (Sub-Saharan Africa’s is over 20 times less).

A first order priority has been to get population growth under control, an effect both of increased wealth and government intervention. It is apocryphally suggested that family planning in Bangladesh was introduced by Australian nuns, but better education and government messaging has led the way.

Sustained economic growth has been made possible precisely because the population growth rate has declined to just 1.2% annually while the labour force now expands at 4% per year.

Though frustratingly tardy for many locals, the responsiveness of government to these challenges has been way ahead of most African counterparts.

Tax incentives, import tax waivers, and special economic zones parks (the government aims to increase these tenfold to number 100 again by 2021) have all been set up to attract investors. Others, too, have played their part. Bangladesh is the home of microfinance, not just in the form of the Nobel Prize-winner Muhammad Yunus’ Grameen Bank, but from the early post-independence activities of the BRAC, originally set up as the Bangladesh Rehabilitation Assistance Committee in 1972, which is now the world’s largest NGO with over 125,000 employees and a variety of business interests. Today the BRAC’s mobile banking business alone touches 25-million Bangladeshis, with mobile penetration at over 50% and growing fast.

But the “anchor” to growth and the most important government contribution overall, argues Dr Ahsan Mansur of the influential Policy Research Institute, is fiscal rectitude. The government constantly undershoots its deficit/GDP targets of 5%, ending up in the range of 3.5%. “In most countries,’ he adds, “it’s the fiscal that invariably ruins development.” This adherence is despite poor tax-to-GDP collection ratios of just 10.5% (which is over 21% in sub-Saharan Africa, and 26% in South Africa).

The Canadian-educated Mansur (his PhD was in general equilibrium analysis) took early retirement from the IMF to set up the institute along with several former World Bank colleagues. He realised the need to shift the ideological bias in the system, which had blighted successive Bangladeshi governments. “Historically those educated in Western institutions,” he notes, “stayed abroad, while those educated in the Soviet Union returned,” their thinking having a disproportionate influence on government thinking.

They are not the only ones whose influence has, perhaps necessarily, waned. “Twenty-five years ago,” reflects Keith Thompson, a UK development expert who has been travelling to the country since 1991, “the aid economy comprised 25% of the local economy. Now it’s less than 2%.”

A recalibration of the role of outsiders – and the role of some 26,000 local NGOs – is part of the process of change, since their role in service delivery has sometimes demotivated government.

Keeping ahead of the demographic curve will require Bangladesh lifting growth still further, to over 8%. This will hinge on increased outward orientation, fresh investment and better productivity.

Improvements to human capital, wider inclusion of women in the economy (their participation rate is just 36% compared to 70+% of males), better infrastructure and greater openness to investors and trade will help to determine whether Bangladesh can follow the regional pattern and move out of garments, and get into ship-building (rather than ship-breaking), plastics and footwear, and deepen its embryonic pharmaceutical and high-tech sectors.

Changing the incentives in the system will matter too. “Dealing with mindset and corruption,” says Mansur, “are important.” In corruption, “government can do more without any cost, though there is little action as it’s too self-serving and upcoming elections offer little prospect of change to this behaviour”.

Corruption extends to the politicisation of the banking system and the relatively high ratio of non-performing loans, some 36%. Changing the perversities and incentives in the system and in so doing dealing with corruption is ultimately a question of political will.

“If the government wants to do something, they will” is a constant refrain.

There is a need, also, to improve the costs and reduce the uncertainties of doing business. Bangladesh ranks 176/190 on the World Bank’s overall Doing Business indicators, and 189/190 in the enforcement of contracts. There is a backlog of three-million court cases, an intimidating prospect for those seeking legal redress.

The regional demonstration effect, which Africa again lacks, has helped to shift the mindset. If you can show, through growth and development, that something works, it’s easier to get other people to do it.

In seeking new sectors there is promise in the basics — in agriculture. Average annual growth in the sector has been over 3.5% during the last decade, to the point that Bangladesh is self-sufficient in rice, with better yields than India. Improving productivity by 20% in aiming to improve further to the levels of Vietnam, China or Thailand, however, will enable Bangladesh to become a larger exporter. Again, this is a sector where Africa has underperformed, with 39 of 49 sub-Saharan countries unable to feed themselves.

Based on current trends, few would bet against Bangladesh. It tops the list of Asian countries in improving average years of schooling, by not less than 1.3 years during the first decade of the 2000s. It’s just that it has proven the country’s second-largest export, with remittance inflows amounting to nearly 10% of gross domestic product.

Whether it succeeds in meeting its challenges will depend on its ability to improve its infrastructure and tax collection, its willingness to deal with governance and corruption, and to deepen economic inclusion. Few would, on the record of the last 20 years, bet against it.

And if Bangladesh, why not Africa? DM

Dr Mills heads up the Johannesburg-based Brenthurst Foundation, and is the co-author of the forthcoming Making Africa Work: A Handbook for Economic Success (Tafelberg). He has been in Bangladesh.