Explainer: Does the opposition have the power to dissol...

Explainer: Does the opposition have the power to dissolve Parliament? 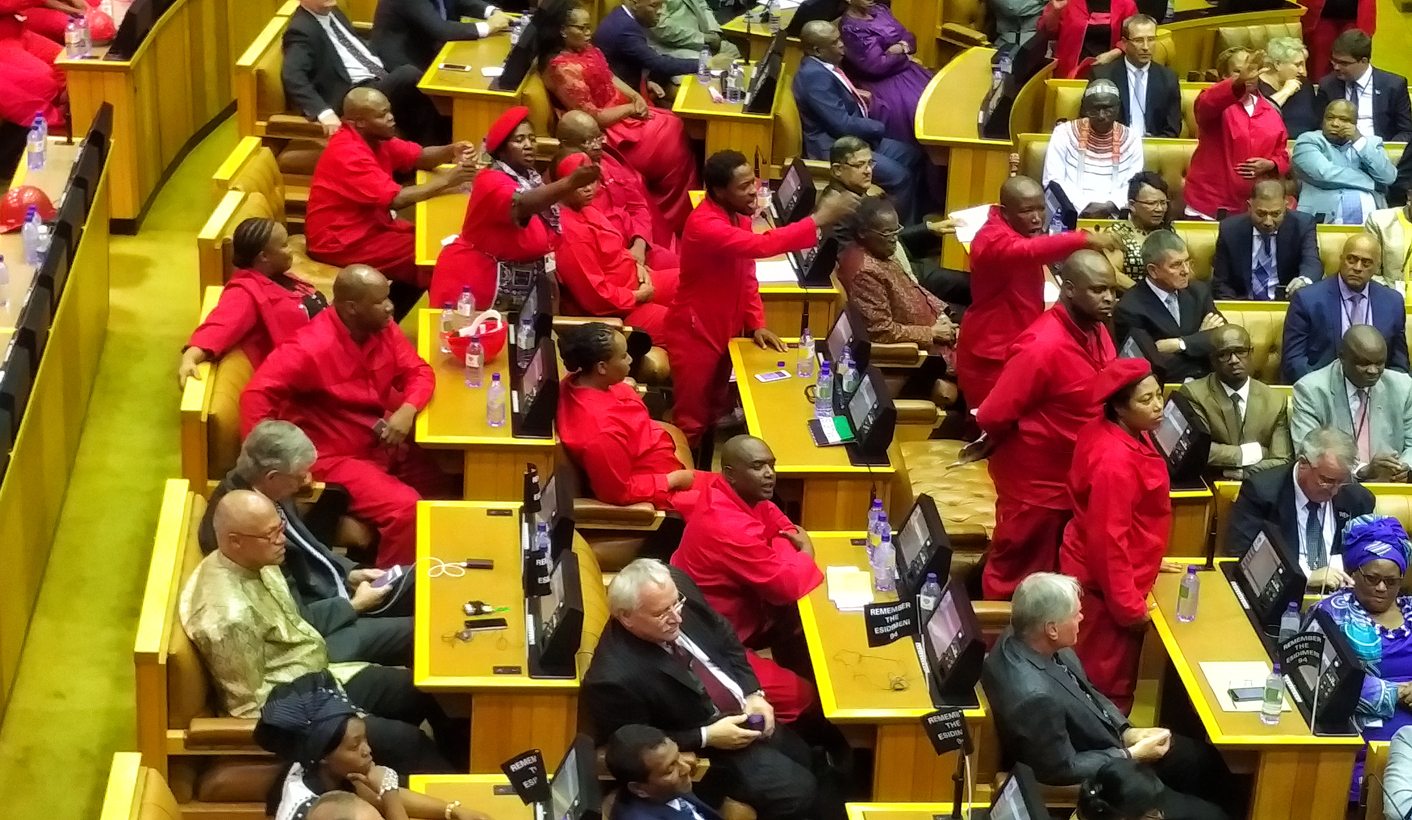 Economic Freedom Fighters leader Julius Malema set the cat among the pigeons again last weekend by saying that the EFF was considering resigning from Parliament in order to force a new round of elections to take place. Can the opposition actually make this come to pass? REBECCA DAVIS dives in.

I heard that the EFF might be leaving Parliament.

No, I mean permanently leaving Parliament. Is that true?

Ah! You must be referring to an SABC interview given by Commander-in-Chief Malema this weekend. In it, Malema said that he’d been in chats with Democratic Alliance leader Mmusi Maimane to discuss the EFF and the DA both turning their backs on Parliament.

Malema said: “I went to [Maimane] and said to the DA leader that if we combine the EFF numbers and the DA numbers, and we resign from Parliament, then that thing is no longer properly constituted Parliament… And then once Parliament doesn’t reach the quorum, then we can approach the [Constitutional] Court to instruct the Speaker to dissolve Parliament and the president to declare elections.”

Wait: So if the EFF and the DA leave, Parliament will have to shut up shop?

That’s what Malema appears to believe. In reality, though, that’s not quite the case. Lawson Naidoo, executive secretary for the Council for the Advancement of the South African Constitution, explains: “Even if [the EFF were to resign] in collaboration with the Democratic Alliance, it would still leave the majority party, the ANC, and the other parties with sufficient numbers to constitute a quorum and perform the tasks of the National Assembly, except perhaps where a special two-thirds majority might be required.”

For the regular business of Parliament, the institution only needs a third of its MPs present, and to pass legislation it requires 50% of them to be there. The ANC could easily achieve both without the participation of the DA and the EFF. We’re talking 249 ANC seats in Parliament, to the DA’s 89 and the EFF’s 25.

What about the bit about forcing an early election?

That’s not right either. Section 50 of the South African Constitution says that a new Parliament could only be elected if three years have passed since the last general elections. As you may recall, our last general elections were in April 2014, so that part might be possible in a few months. However, the Constitution also says that the majority of MPs would have to vote in favour of the National Assembly dissolving, which would not happen, given the ANC’s aforementioned numerical dominance.

How about if the EFF just decided to leave Parliament anyway, as a symbolic protest against an institution it considers corrupt?

It probably wouldn’t be the best idea for the party. Parliament, Naidoo points out, has served for the EFF as “a very useful platform that it has used effectively to raise its public profile and embarrass the ANC and especially President Zuma”. Leaving Parliament would also mean that the EFF wouldn’t have its say in portfolio committee meetings on issues that are dear to its heart, such as land.

If I were an EFF voter, I might not be thrilled that they’d taken my vote but were no longer going to represent my voice in the National Assembly.

There’s that, too. Naidoo suggests that EFF action would have to move out of Parliament. “It may lead to the EFF seeking to mobilise its supporters in extraparliamentary political and protest activities.”

Also, without the EFF there, would anyone want to watch Parliament?

What does the DA say about this plan?

In his interview, Malema made it sound as if DA leader Maimane was engaging seriously with the notion. DA federal chairperson James Selfe, however, was singing a slightly different tune on Monday. Asked by eNCA whether the DA was indeed “in talks” with the EFF to resign from Parliament, Selfe replied: “That would be overstating it.”

He explained: “In our view, it would be disastrous and counterproductive to leave parliament, because… the seats of a party that doesn’t take up its seats in Parliament are redistributed to other parties in a proportional basis.” Selfe also expressed concern about abandoning the mandate of DA voters in the National Assembly.

He said that the idea had been mentioned by Malema to Maimane “in passing” late last year, and no “substantive” discussions had followed it. “I would regard it as a non-starter unless Mr Malema has a better way of overcoming it,” Selfe said, but later added that if it was tabled for formal discussion between the two parties they would deal with it like any other issue.

It sounds like the DA and the EFF are getting pretty cosy.

Up to a point. Selfe acknowledged that the two parties are in “regular talks”, which he ascribed mainly to the fact that they are in co-governance agreements around the country. He also described the relationship between the two as being characterised by “mutual respect”. When Malema was asked if the EFF and the DA were getting ready to shack up, however, he said they were “just flirting”.

The two parties have been co-operating more closely in the National Assembly over the past year. DA Chief Whip John Steenhuisen explained last year: “Despite very deep ideological gulfs on matters of the economy and land, we were able to bridge those differences here at Parliament, where it was to the benefit of democracy and the Constitution.”

Back to the Parliament resignation plan. Why is the EFF even considering such a drastic step in the first place?

In essence, the party is fed up with what it perceives as a failure on the part of both Parliament and Speaker Baleka Mbete to hold President Jacob Zuma accountable for having violated his oath of office in relation to Nkandla. That, and they keep getting moered.

“We are not just enjoying being inside. We are being beaten up. We are being tortured in Parliament for fighting for exactly what the Constitutional Court said was wrong,” Malema said, in reference to the court’s findings on Nkandla. Later: “We are still weighing our options. We are still fighting from within. And maybe, at the end of everything else, we will come to a conclusion that perhaps we must resign.”

Asked how long it would take the party to reach that stage, Malema replied: “The revolution is not like a birthday party.” He said that they would exhaust other options first, and “when we are ready, we will make a pronouncement that the ground is fertile, everyone is persuaded – not just in the opposition, by the way.” Malema said that it was possible that a reconstituted Parliament, after new elections, might simply contain the same people – but that the sixth Parliament, rather than the current fifth, would be able to hold the executive accountable.

Is there precedent for this type of parliamentary resignation caper?

Just last year, the Congress of the People (COPE) pulled its MPs from the National Assembly in protest against its refusal “to act against the incumbent in the office of the president”. (They were so angry they didn’t even want to use Zuma’s name there, you might observe.) Given that COPE has all of three MPs, however, the move failed to bring Parliament to its knees.

Elsewhere in the world, political parties have withdrawn from legislative bodies as acts of dissent. In 2016, Turkey’s main pro-Kurdish party announced it was leaving the Turkish Parliament in protest at the arrest of its MPs, for instance. That decision seemed to be partially walked back, however, after the spokesman for the Peoples’ Democratic Party said that the decision could only “be made in consultation with the people”.

In general, though, it’s safe to say that political parties generally lobby to get into Parliament, rather than out of it. DM