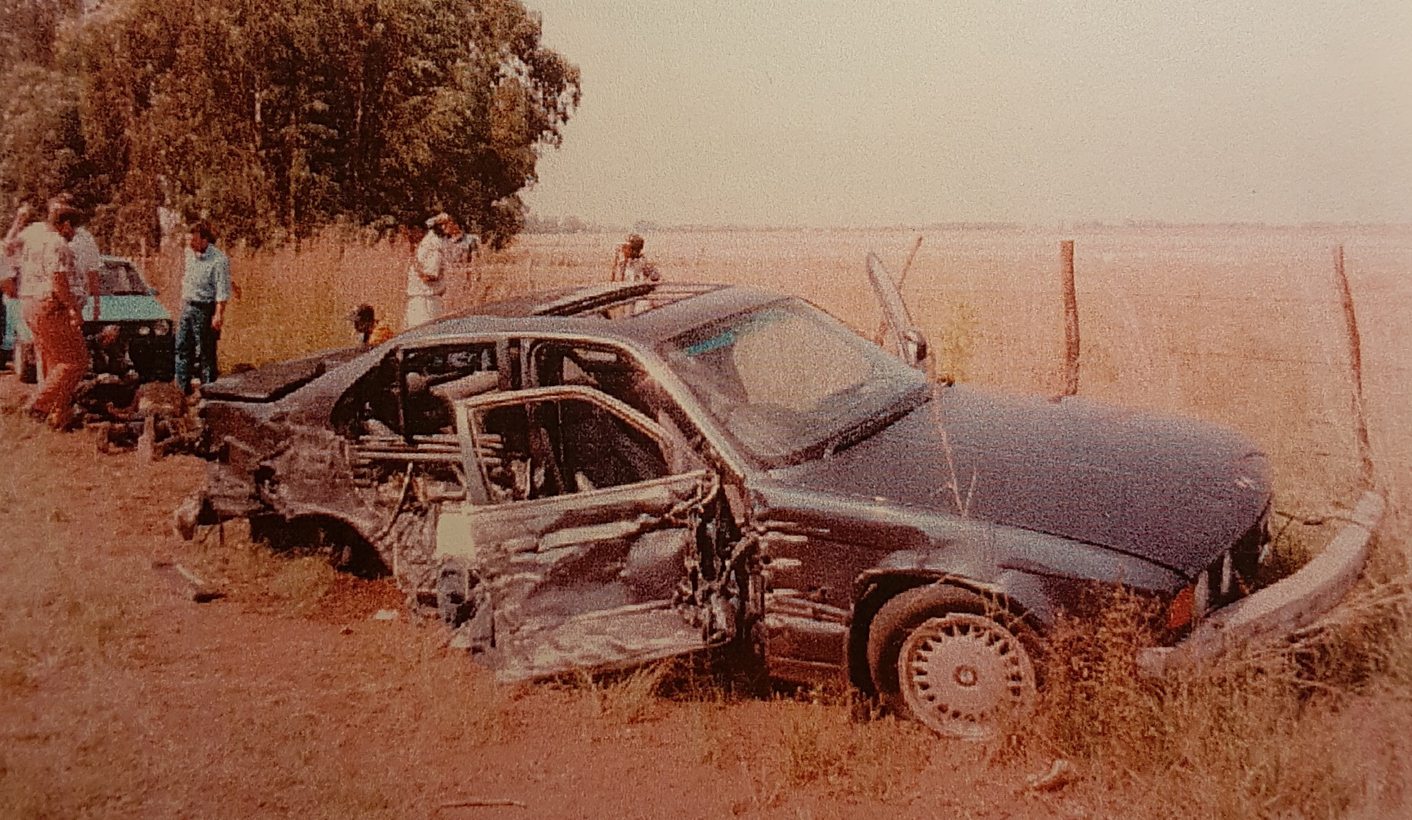 The year is 1994, a few weeks before South Africa’s first democratic election, and two security guards are murdered at a Checkers supermarket. One man is convicted, Anthony De Vries, and after 17 years in prison he still claims to be innocent. An eight-part podcast called Alibi  will explore if Anthony is guilty or innocent. As the story unfolds you’ll discover car chases with the cops, bullets buried in video shops and a wheelchair-bound, incredibly friendly bank robber. By Paul McNALLY.

When I first spoke to Anthony de Vries two years ago over the phone he was in Boksburg Correctional Centre and I was oblivious to the details of his case, only that he had been there almost two decades and was insistent that he shouldn’t have been put there. We spoke at length that first day. I was sitting cramped in my car outside my flat taking notes in the near dark. He had been convicted of two murders, two counts of attempted murder and robbery. His defence for being covered in blood when arrested was that he had been mugged while on his way to a job interview. This sounded fabricated. He strained to add (repeatedly) that his conviction had been the result of the police having a grudge against him.

I hung up. My girlfriend and I went for a Shawarma in Norwood. People (who I had reasons to trust) had sworn to Anthony’s innocence. But I wasn’t convinced. I figured that I needed to keep looking for a better case.

I was asked recently by a man on Facebook called Steve: “So this is like ‘Serial’?” (referring to the podcast crime series by This American Life).

My reply: “Yep. But with South African levels of crime and violence.”

Steve: “Sounds good.” He’d probably be less enthused if he’d actually spent hours with the photos from the appeal papers as I have – the one murdered guard was laid out dead on the floor in his white underpants to be photographed. The blood from when he was shot in the face had dyed his bushy beard red.

As a member of Wits Justice Project and The Wits Radio Academy the incentive to create “a Serial copy, only local” in early 2015 was overwhelming. Podcasts were ubiquitous in conversation (if not in download numbers), and there was a sense that South Africa had crime, the internet and a growing number of iPhones and so should certainly get its own ‘Serial’. Added to that: I had personally been recording a variety of radio pieces since moving to Johannesburg (for Justice Project and The Academy’s The Science Inside) and wanted to be involved in radio documentary in any way possible.

The trouble was the grip of Serial wasn’t exclusively the case, but the narrator Sarah Koenig’s relationship to her case study. I didn’t have a case or an empathetic, ethically ambiguous bond with a man struggling inside. Not yet, anyway.

Wits Justice Project provided an incredibly fortuitous platform – they receive mountains of letters every week from inmates who claim to be innocent. The project is part of Wits Journalism. But despite digging through the letters and exploring other possibilities I came back to Anthony in Boksburg. The reasons for the police having a possible vendetta against him were too compelling. I think it is better to discover them by listening to the podcast (the first episode is below this article), but they let the case live beyond a simple “did he do it?”. It made me question the state of the police during our period of transition and how many other people could still be inside today after having their cases mangled during this relatively lawless time.

Good writing should seem effortless. But good radio relies on it feeling conversational and almost impromptu – while putting together a long-form investigative piece is a lot of scripting and editing and more scripting. There is a peculiar tension in episodic journalism where you are following the journalist as a character through a case and experiencing their surprises, sorrows or triumphs with them, while still being aware that they know what is going to happen next. When I started work on this story I had no idea if Anthony was guilty or innocent and though that is the central question (which is explored up until the final moments of the eighth episode) it is also a leaping off point for issues around the criminal justice system.

I became haunted by the photo of the security guard with the blood-soaked beard and saw it as a point of release from trying to recreate another piece of journalism. This show would be compared to Serial (for better or worse) but once I got fixated on this photo those concerns fell away and the story became about finding justice for this man and his partner who were gunned down at 9am while working at a shopping centre in Vereeniging surrounded by kids and families.

During the eight-part podcast series (available on iTunes and soundcloud and broadcast each Sunday on SAFM at 2.30pm), you’ll follow presenter Freddy Mabitsela and me as I visit crime scenes, find police officers with stories of shootouts, unravel conflicting documents, chat to family members about DNA, stake out prisons, piece together medical records for evidence of torture and drink at taverns to wait for lawyers. DM

Alibi is broadcast weekly on SAFM at 2.30pm on Sundays (First episode on the 5th of March).