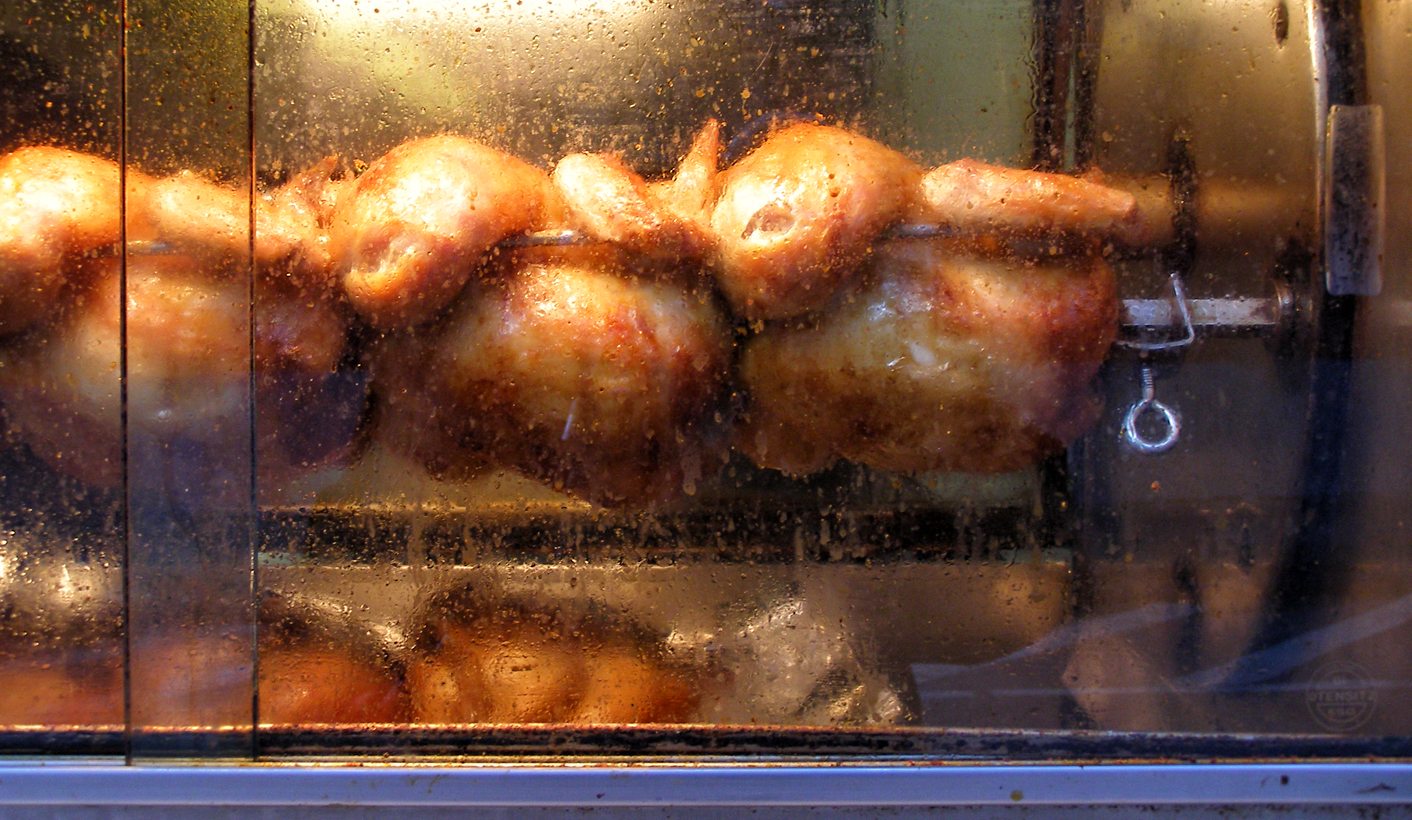 South Africa’s chicken industry is being destroyed by a flood of cut-price exports from the European Union, claim local chicken farmers. Except it’s not quite as simple as that. By SIMON ALLISON.

This story starts at the dinner table. A European dinner table, to be precise, where well-heeled, health-conscious diners are tucking in to yet another portion of chicken breast with trimmings. For reasons of taste, health and weight, these days Europeans are not eating the other bits of the bird: the drumstick, the thighs, the wings, and the gizzards. Or, at least, not as much as they used to.

But here’s the catch: you can’t yet grow chicken breasts independently of all the other portions (although scientists in Frankensteinian labs are desperately trying to solve this problem). So while European farmers are making a tidy profit from chicken breasts, they’ve got mountains of other cuts that they need to find another market for.

One of those markets is South Africa. Nearly half of this country’s poultry imports come from the European Union, mostly in hefty frozen bricks which must be thawed and repackaged before they can be sold in South Africa in supermarkets and butcheries. They come cheap, too, at just R15 per kilo, which keeps the price of chicken down for consumers. There’s a reason that KFC can offer a Streetwise 2 for R31.90 and still turn a profit, and this is it.

So far so good. The EU sells off its excess chicken portions, and South Africa gets cheap protein. Inevitably, however, there has to be a loser, and in this case it is South Africa’s own chicken farmers. They are being undercut by frozen European poultry, which is squeezing revenue, forcing some farmers out of business, and putting pressure on employment. Already, the country’s second-largest chicken producer, RCL Foods (better known as Rainbow Chicken) has halved the workforce at its Hammarsdale plant, slashing 1,350 jobs, while another 1,605 could be lost if Country Bird shuts down its Mahikeng abattoir as expected.

The chicken farmers are not happy, and warn that more job losses are to come unless something changes. They believe that the EU exports violate international trade rules, and constitute dumping, which is when goods are exported at a price lower than is charged in their home markets.

According to the South African Poultry Association, the EU produces chickens for approximately R32 per kilo. South African chicken is actually cheaper to produce, at R27 per carcass, but local producers cannot compete with those frozen bone-in portions that arrive from Europe for just R15 per kilo. This confounds the normal economics of the chicken industry, which dictate that because of processing and packaging costs, parts of the bird cannot be sold for cheaper than a whole carcass.

In figures cited by Business Day, the poultry association claims that European imports now account for 80% of South Africa’s frozen bone-in market, up from just 0.5% in 2012; the EU disputes that figure, claiming it is just 14%.

“It’s an illegal practice that’s destroying jobs,” said Francois Baird, head of FairPlay, an organisation established to lobby on behalf of chicken producers. “The EU is on the one hand claiming to aid development in Africa, on the other hand destroying jobs in Africa.”

Baird says that his organisation supports trade and competition, but not when it is illegal. “It’s a very simple analogy. If you want to drive on the road, you need to follow the rules of the road. And if you drive recklessly then you kill people. We think dumping is making people poorer, and all we want to do is for the government to obey the law.”

Baird empathises that the poultry industry’s issue is specifically with Europe, and not Brazil, another major exporter of poultry to South Africa, because Brazil is not dumping – their chickens are genuinely cheaper than those of their South African counterparts.

To make matters worse, South African Poultry Association head Kevin Lovell has warned that the imported chickens may be less safe than their domestic counterparts. He explains that thawing the frozen chicken allows bacteria to multiply, which may increase risk to consumers. “The imported product, if it’s handled again, is less safe. That doesn’t make it unsafe, but it’s less safe,” he said.

Trade minister Rob Davies is on the chicken farmers’ side, although he adds that there are things that local producers could and should be doing to make themselves more competitive.

“The competitiveness issues are there, we have to work around those with the industry,” said Davies. “But they’re not going to be solved if we just allow an influx of spare parts from around the world to come in to take over the market.”

There is bite to Davies’ bark too; in December 2016, the department of trade and industry slapped a “temporary” 13.9% duty on EU chicken imports while it conducted investigations into the allegations of dumping.

The EU, naturally, tells a different story. It denies dumping, and says that it is being used as a scapegoat by uncompetitive local producers. The issue is clearly sensitive, so much so that EU ambassador Marcus Cornaro, when he spoke to media earlier this year on the subject, issued a veiled threat that the so-called “chicken war” might imperil the whole EU-SA trade relationship: “Indeed, it would be a pity that, out of that wrong reflex [of blaming the EU], our entire very strong, very healthy and very mature trade relationship… would give in to the populist notion of yet another unfair trade relationship,” said Cornaro.

In a briefing document provided to the Daily Maverick, Cornaro said South African chicken farmers were exaggerating the impact of EU imports on the market.

“After two years of drought in southern Africa, feed costs had risen by 30% to 50%. For an industry such as poultry, where feed costs account for up to 70%-75% of total input costs, this was unquestionably a disaster. Electricity prices, inefficiencies that undermine the competitiveness of the SA producers and domestic brining practices certainly have also contributed to both price sensitivity and consumer choice.

“There has been heavy investment in brining machinery, something which now has to be written off after the regulations have changed to limit brining to 15%. In the face of increased imports, SA industry has been slow to use market access opportunities to export chicken – for example chicken breasts – to the EU,” said Cornaro. DM