Analysis: Is Zuma/ANC starting a battle for the soul of SA judiciary? 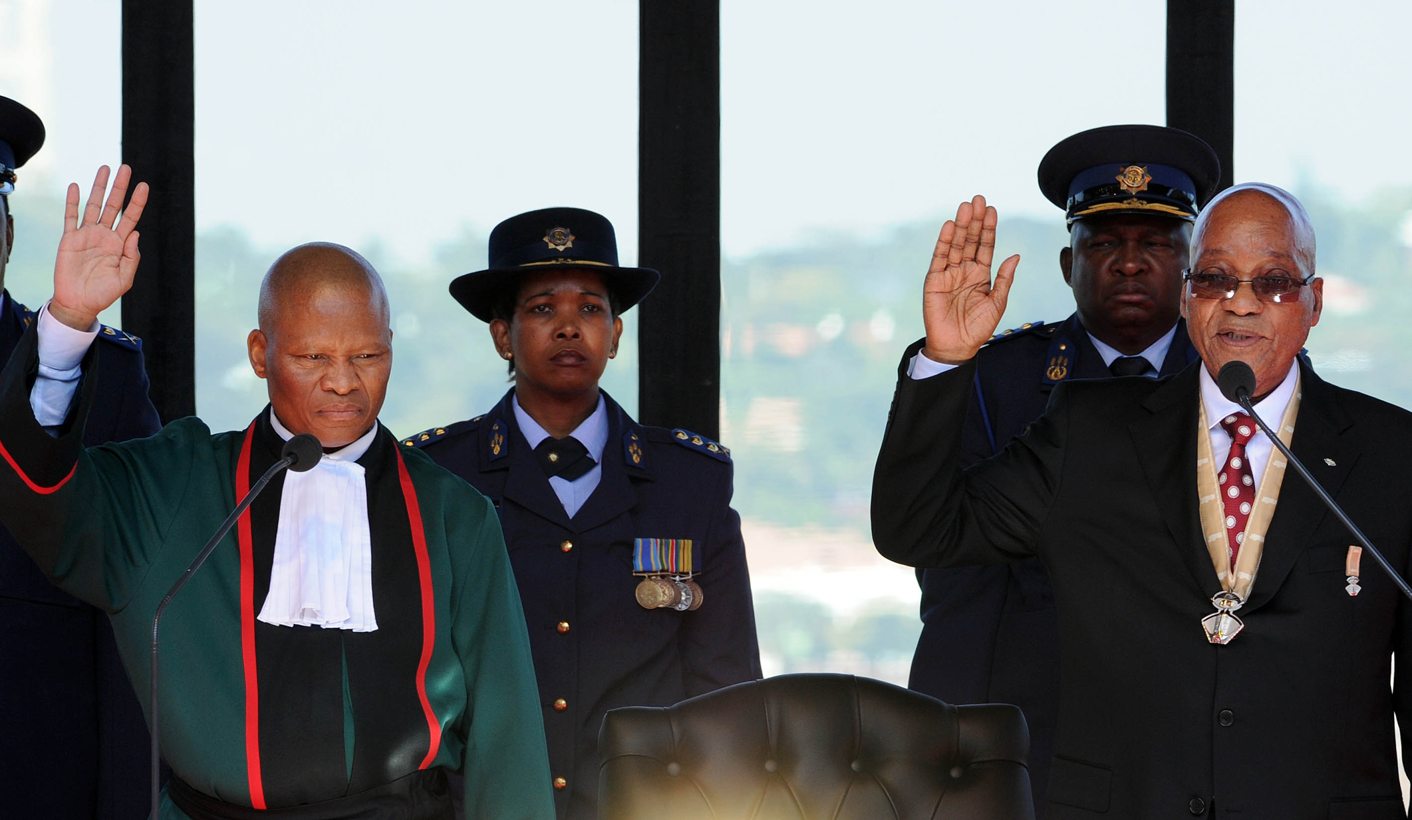 There can be no doubt that judges and the judiciary in general are not President Zuma’s close and intimate friends. So, when there is movement in the arena around judges and the way they are appointed, it is important to sit up and take notice. On Friday, Zuma said he was nominating Constitutional Court Judge Raymond Zondo to take over as Deputy Chief Justice. The night before, he had removed three of his representatives on the Judicial Service Commission. And on Sunday came news that the ANC wanted to ensure that only “progressive” judges ended up on the Bench. Some will fear that Zuma is trying to bend the Bench to his will. If that indeed is the case, and while he might be too late for this specific party, it is certainly important not to let the moves be obscured by the current plethora of SA political fights. By STEPHEN GROOTES.

Since Zuma’s inauguration in 2009, judges have done more than surely any other sector of society to put boundaries around President Jacob Zuma’s behaviour. Almost from the first moment of his presidency, they have challenged his power to do what he wants. Just a few weeks after his ceremony at the Union Buildings, he nominated Advocate Menzie Simelane to the position of National Director of Public Prosecutions. It was eventually struck down by the courts. Last year, one of Zuma’s weakest moments was surely the Constitutional Court judgment on Nkandla. And in between, his government has lost case after case, almost always in humiliating fashion.

It is quite surprising then that Zuma has done very little to try to influence the way judges are appointed. This is probably a reflection of how difficult it would be to do. The Judicial Service Commission (JSC) is made up of current judges from the high courts, the Supreme Court of Appeal and the Constitutional Court, representatives of attorneys and advocates and legal academia, the Justice Minister, members of the National Assembly and the National Council of Provinces and four people designated by the president. The whole point of the JSC is to provide a mixture of democracy and expert knowledge when appointing judges, which makes it very hard to nobble.

But in the past, it has still been vulnerable to political pressure. Opposition parties were obviously outnumbered, particularly when you considered the four presidential appointments. In some cases, it was obvious that the group aligned to the ANC had already decided who was going to be nominated to be a judge. There would be days of interviews and literally half an hour after the JSC met in closed session, a list of names would be issued. In other words, the “discussion” had already been held beforehand.

But then things changed. Decisions by the JSC began to become more difficult to predict. The introduction of Chief Justice Mogoeng Mogoeng as chair, after he went through a particularly difficult interview process, changed the dynamics. And of course, Julius Malema taking the Economic Freedom Fighters’ seat on the panel added yet more unpredictability to things.

Now Zuma appears to be at least attempting to take action. He has not said why he decided to remove Advocate Dumisa Ntsebeza, Advocate Ismael Semenya and attorney Andiswa Ndoni from the committee. Each was prominent in their own way; Ntsebeza as chairman of Advocates for Transformation (among many other hats that he wears, including of course as the former evidence leader for the Truth Commission), Semenya has had a long and admirable track record at the Bar and as chairman of the General Council of the Bar, and Ndoni was the chair of the Black Lawyers Association when she was appointed. As they each have their own constituencies, they certainly would not be at Zuma’s beck and call. If they are replaced with people who do not have track records of their own, that could be a sign that Zuma might control them in some fashion.

He could of course allay all suspicions and simply tell us why he has acted now… Maybe the three sacked judges are to be appointed to the Brics Bank.

But it is still difficult to see what impact this move could possibly have. The JSC interviews are held in public, and such is our judiciary at the moment, it is very unlikely that any of its members would back Zuma in any kind of corner.

On Friday, Zuma said he was going to nominate Zondo to take over the vacancy left by now retired deputy chief justice Dikgang Moseneke. The position had been left empty since May last year. Which is surely an indictment on Zuma in itself. Zondo has been described as leaning towards the “conservative” side in his judgments. Of course, he may well dispute that. And while the position he occupies doesn’t necessarily have a huge impact on proceedings in the court, he would be the first name mentioned to occupy Mogoeng’s chair when he retires.

But this nomination doesn’t appear to square with what the ANC is now claiming to want. It was reported on Sunday that the party wants its deployees on the JSC to re-look at the “appointment criteria” used to decide who becomes a judge. In discussion documents which have not yet been made public, the party is reported to want “judges with a progressive philosophy and who advance judicial activism to give effect to social transformation to be appointed to the Bench”. Zondo would presumably not be the first judge to come to mind to fall into that definition.

There also appear to be several problems around the word “progressive”. In the legal sense as it is applied to judges in this country, it is often used in the context of a dividing line between “progressive” judges and those who are “executive-minded”. “Progressive” means a judge who tends to find in favour of the citizen against the state. Perhaps the best examples of “progressive” in our legal history are the rulings around Grootboom (which said people have a right to a home provided by government) and various decisions around water and electricity, which have placed legal duties on councils controlled by the ANC.

These rulings have made life very, very tough for the ANC in government. It has put the focus on service delivery, and the party’s deployees have often been on the wrong side of these rulings. By contrast, in this context, “executive-minded” means more likely to agree with the executive, or in other words, government.

But the real problem the ANC may have is that judges, here and in many other places, have shown that their behaviour after they’ve been appointed is hard to predict. Mogoeng himself was referred to as “executive-minded” before he was appointed. He wrote the Nkandla judgment, and led the judiciary in its public statements after government ignored the court order in the Omar al-Bashir matter.

In some ways, the fact that there is some movement around the issue of judicial appointments again is not necessarily cause for concern. The ANC, as a “pro-poor” party, should want “progressive” judges. The president could have simply said that the three people he removed had been on the JSC for several years and it was time for a change. And Zondo is a perfectly acceptable, and admirable, choice for the Deputy Chief Justice position.

But, at this stage in his presidency, Zuma has given us every reason not to trust him, and not to take his explanations, or lack of them, at face value. And the ANC is showing signs of desperation, of realising that it will not be easy to stay in power simply through winning elections (apart from the other signs that point towards crisis and that the 104-year-old organisation is impossible to manage and could be about to fall apart). In such situations, it is impossible to be too careful when Zuma and Co make three major statements regarding the judiciary within three days. The people that Zuma nominates to the JSC must be scrutinised carefully, and the discussion in the ANC about “progressive” judges needs to be examined to ensure that “progressive” doesn’t become code for something else.

In a year in which politics is almost overwhelming, and people are fighting on many different fronts, Zuma may just have opened another battle line. It must not be allowed to happen in obscurity. DM