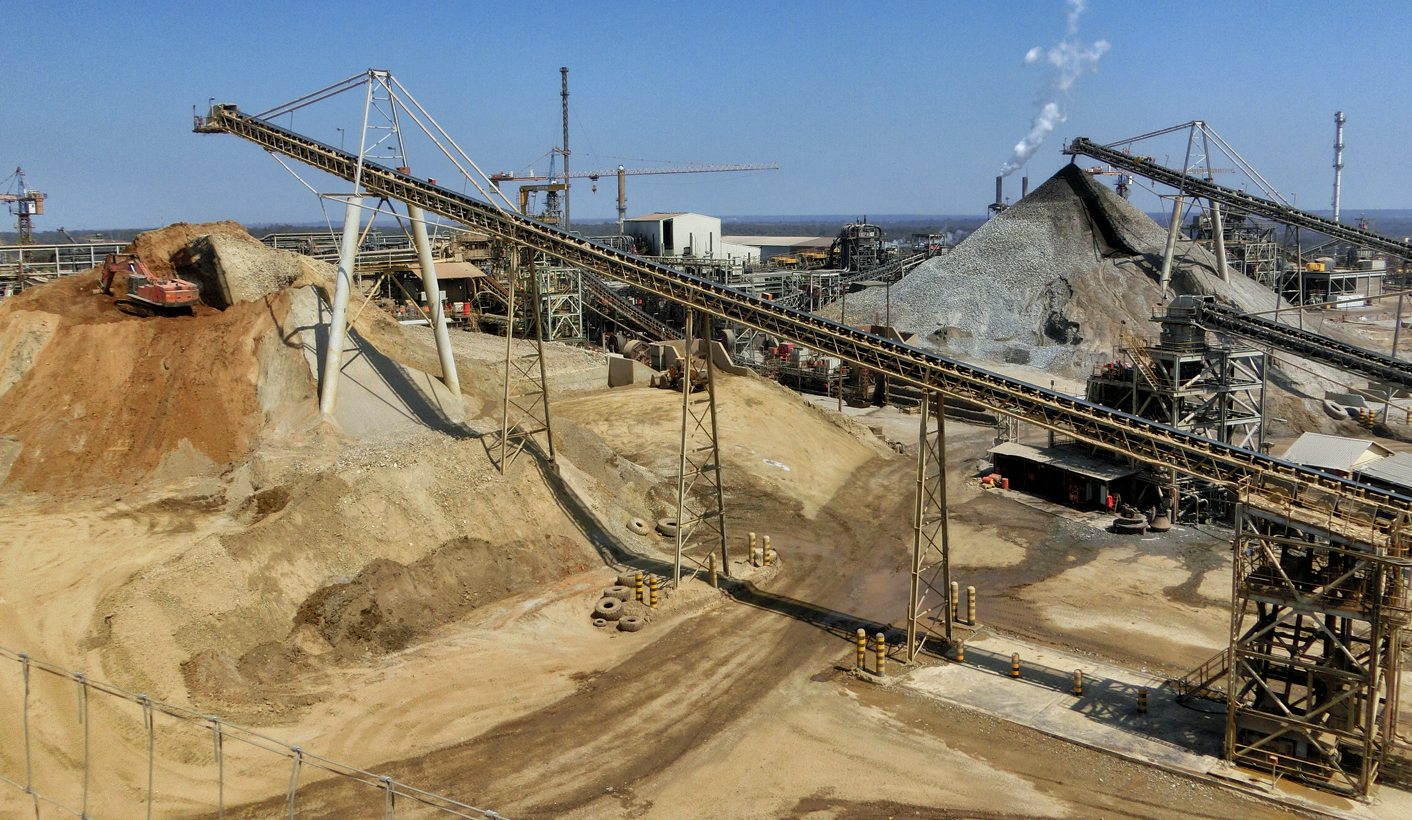 Kanshanshi copper mine in North-Western Province, Zambia. At a macro-economic level, the country's mining industry has suffered from the Lungu administration’s excesses, says the writer. (Photo via Greg Mills) Main photo: Kanshanshi Mine (Greg Mills)

Despite the claims of those who said growth in Zambia was the result of better governance, the problem now is precisely that it wasn’t. To the contrary, the country is now among the most unequal countries in the world. Today the top 10% of Zambians receive 52% of all income, while the bottom 60% of the 16-million population gets just 12%. By GREG MILLS.

Zambia was a poster child for the Africa rising era in the 2000s, when its economy grew at 7% annually.

We know now, in today’s more difficult times, that across Africa this growth had little to do with better governance or, for that matter, governments’ development vision, focus and actions.

In Zambia, when Chinese interest slackened and the copper price went down, economic growth slowed, the effects worsened by inconsistent tax policy and a spendthrift government. Growth fell to just 2.9% by 2015, and 3.6% last year, barely enough to maintain current per capita incomes and wholly inadequate to generate the employment required, especially by the large number of young people looking for jobs.

Debt, from which Zambia was all but totally relieved in 2006, now stands at just under $10-billion, or half of gross domestic product. Much of the new debt taken out under the Patriotic Front government (which took over in 2011), more than $3-billion in just four years, has been spent on civil service salary increases. The public service numbers 237,000 of the 625,000 people in formal employment, and consumes more than half the government budget. Public service salaries have increased by nearly 60% in real terms under the PF government, now led by Edgar Lungu.

Despite the claims of those who said that growth was the result of better governance, the problem now is precisely that it wasn’t. To the contrary, Zambia has become among the most unequal countries worldwide as the proceeds of growth were redistributed among the Lusaka-based elite.

Bereft of ideas, rather than take difficult political steps the government has sidestepped its responsibility in reverting to tried and trusted populist methods of squeezing foreign investors, behaving less like a poster-child than a predator.

Much of the country’s recent boom has been based on the fresh investment made in the country’s mines after privatisation. But Lusaka only agreed to sell its crown jewels when there was absolutely no other alternative.

In April 1968, then President Kenneth Kaunda set the nationalisation ball rolling by announcing the state would take control of all private retail, transport and manufacturing firms. Thereafter government purchased 51% of shares from the existing mining companies, Anglo American Corporation and Roan Selection Trust. In 1973 both companies were fully nationalised and transferred to the state’s Zambia Consolidated Copper Mines (ZCCM). That year, the mines produced at least 720,000 tonnes of copper and employed 48,000 people.

Over time, however, burdened by poor state management, the copper industry collapsed and along with it the economy. ZCCM production fell to 257,000 tonnes in 2000, when it employed just 21,000 people, losing $1-million each day. The contribution of mining to the economy fell from one third of total output in 1973 to under 8% of output 30 years later.

Over the same period Chile’s copper production, from lower grade ores, went from less than 700,000 tonnes to over 5-million tonnes.

Since privatisation in Zambia in 2000, mining companies have consistently provided 80% of export income, 12% of GDP and around one third of all tax income. More than $10-billion has been invested, over 85% of all FDI in this period, most of it by the three biggest companies – Konkola, Mopani, and First Quantum’s Kansanshi and Sentinel mines.

Copper production scaled the early 1970s’ peak for the first time again in 2012. As a result, contrary to popular perceptions, the number employed in the post-privatisation mines is greater than under nationalisation, now more than 50,000. Additionally, the government has enjoyed an automatic 10-22% free-ride through ZCCM-Investment Holdings (IH), from which is has gained not less than $200-million in dividends from Kansanshi Mine alone.

Even so, judging from their actions, successive Zambian governments apparently prefer to see the mining industry as crooks conniving to undercut the state and rip off Zambians.

First Quantum and ZCCM-IH have invested over $2.5-billion in Kansanshi. There have been a number of years when Kansanshi, alone, has been responsible for as much as 90% of Zambia’s corporate income tax, totalling to date $3.7-billion. It has also invested close to $200-million in CSR and education projects. Wage and electricity payments have injected another $50-million monthly into the Zambian economy from mines that did not exist in 2000.

In return, following the abrogation by the previous Zambian government of the original, more investor-friendly development agreements in 2008, First Quantum has received a grand total of 80% of Kansanshi’s declared dividends amounting to $800-million (ZCCM-IH receiving $200-million), a long way from paying back the investment. Still, with its $800-million and backed by further loans, First Quantum has built Sentinel at a cost of $2.3-billion, which will add another 300,000 tonnes of copper and more than 4,000 jobs to Kansanshi’s 270,000 tonnes and 8,000 jobs.

Now ZCCM-IH has instituted a legal action against First Quantum (and is threatening similar action against others) over the extent of interest payable on retained earnings at Kansanshi, despite these being ploughed back into the mine and its associated smelter. Given Kansanshi’s earnings it’s hard to see that any better investment opportunity ever existed in Zambia.

It’s hardly an action to encourage First Quantum’s directors to travel to Zambia, let alone attract other, serious investors who always look to see the way in which those already present are treated. While the Zambian government is desperate for cash to keep itself afloat, and this may be little more than a negotiating ploy, treating your most important investor this way risks a lot of hurt.

How painful this will be depends on Lusaka’s next move. Lacking fresh development thoughts, it has nowhere to go. This has led it to tap existing sources such as First Quantum, rather than sign on to an IMF programme, trim government, make savings and grow the economic base, investment and jobs.

Without change, it’s a path to ruin.

In part the tense relationship is ironically because of First Quantum’s dominant position in Zambia as the largest producer. Negotiations with the government are a paradox: they need more from First Quantum because the company is the main investor and taxpayer, because it fixes the roads and transmission lines, and builds and provides for local communities. Not only is it a constant reminder of the government’s failure, at the same time Lusaka needs to encourage the company to invest more.

The question for mining companies is whether it’s possible to shift off this increasingly predatory if schizophrenic path, one that threatens beyond Zambia as African governments search for answers to fix rather than fundamentally change the boom, gorge and bust nature of their political economies.

Of course, the better the education about how mining is hyper-dependent on technology, management and capital, the easier the route to partnership.

Miners and government have pursued various attempts at dialogue, most notably through the Zambezi Protocol. Such processes offer policy transparency and stability, but are at risk of cynicism and the political temptation of avoiding hard choices; an unwillingness to change a system from dependence on extractives and rent-seeking to one where the government is comfortable letting go and allowing the private sector to flourish.

And if Lusaka really does believe that the nasty foreign miners are ripping them off, taking their copper, then attempts at dialogue are deceitful, a case of rearranging deckchairs on the Titanic. A combination of misplaced nostalgia and apparently boundless avarice could, in this scenario, extend to government trying again itself to run businesses; put simply, nationalisation redux.

If the collaborative, educational route of dialogue fails, vastly more powerful but infinitely more dangerous levers exist. For one, the mining companies can signal their willingness (or not) to carry on regardless. Curtailing any further investment will inexorably lead to decline of the existing assets, and with it a fall in production – exactly what happened under ZCCM, although for entirely different reasons. This carries with it the risk that mines may reach a point of no return where the asset becomes too run-down to ever fix, and closure is inevitable. Shutting down production may be the only reset that government understands — but then it would be too late. DM

Mills heads the Brenthurst Foundation, and is the co-author of the forthcoming Making Africa Work: A Handbook for Economic Success (Tafelberg)