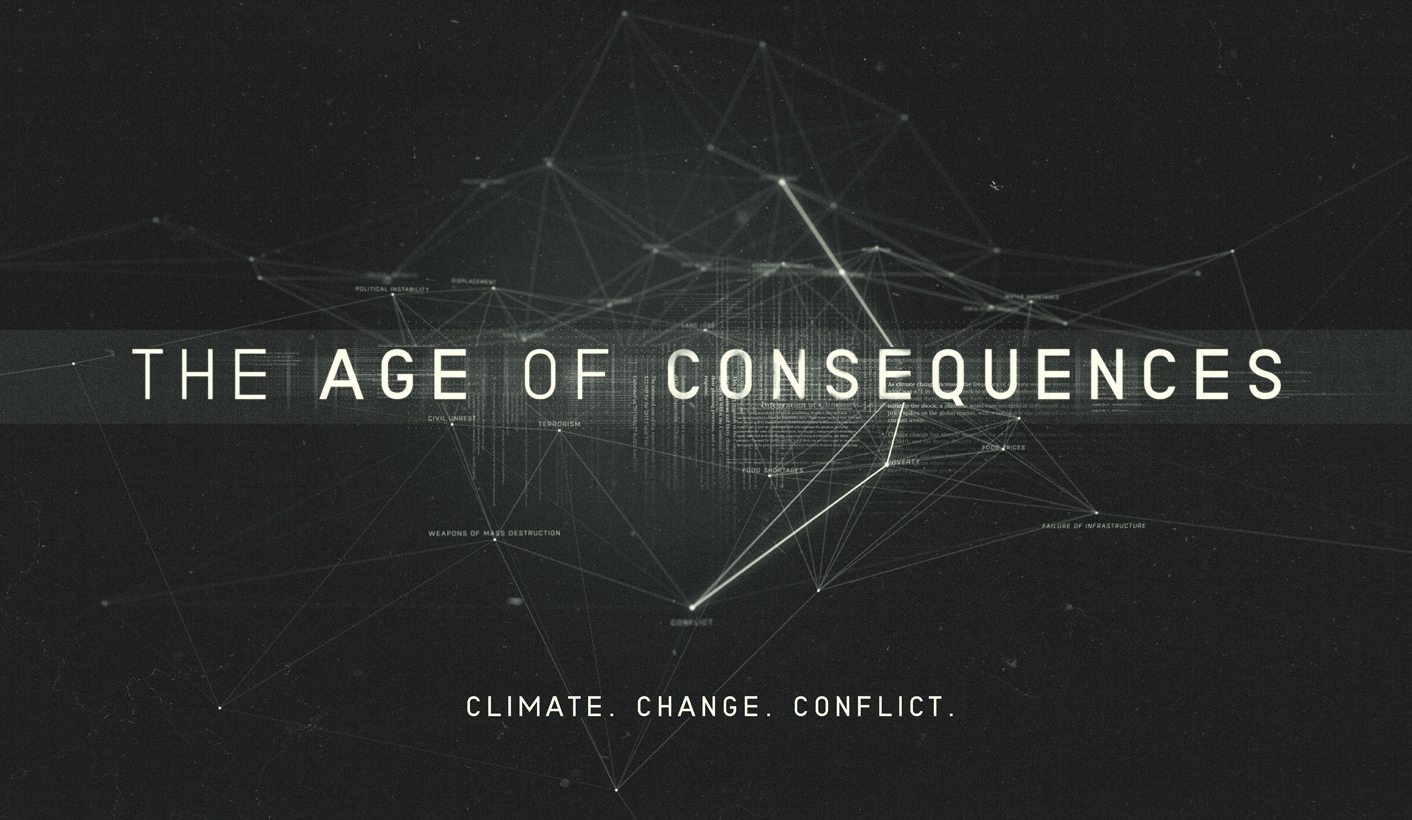 The stereotype has climate change activists pegged as tree-huggers, so it may come as a surprise to see a string of admirals, generals and military veterans tackling the issue as a threat to global security. Yet Age of Consequences, a new documentary opening at the Annual SA Eco Film Festival in March, has them doing just that. By MARELISE VAN DER MERWE.

The climate change debate seldom drifts into the political arena, unless it’s via the campaign trail, with voters evaluating the stance of various parties on environmental issues and weighing up their support from there. Environmental issues often still remain a sideshow. Age of Consequences, to be premiered in South Africa at the upcoming Annual SA Eco Film Festival, flips this arrangement on its head, locating climate change at the centre of political turmoil globally.

It’s an interesting perspective. It’s not often one views environmental issues through the lens of national security, or through the narratives of admirals, generals and military veterans. For this alone, the film is something new. “The Hurt Locker meets An Inconvenient Truth,” as one reviewer put it.

The hypothesis goes something like this. Climate change doesn’t cause wars, but where tensions exist, droughts, floods and a lack of food security can be the final straw that breaks the camel’s back. If one accepts Harold Lasswell’s simple summary that politics is about who gets what, when and how, the idea of climate change as an accelerant of instability makes perfect sense. Environmental factors impact on the availability of basic resources needed for survival, so the less is available, the dirtier the fight. Where there’s limited water, food prices go up, or other environmental factors cause mass migration, there will be anger and discontent.

It’s a story worth telling in South Africa, which in recent years has faced its worst drought in over a century. Inequality remains at the best of times, but where food prices are shooting up and desalination would cost taxpayers billions, tensions run higher. In Cape Town, dam levels have dropped to a point where there is little over three months’ worth of water left. Citizens were left outraged when the City of Cape Town named and shamed the worst water wasters, only for radio personality Aden Thomas to investigate the matter and find that at least one of the wasters was living over an underground leak that had been left unattended. Further afield, South Africans have protested against poultry imports among already skyrocketing food prices, with other analysts predicting that the arrival of armyworms could lead to price hikes on staple foods, job losses, possible food export restrictions, or perceptions of corruption in food aid distribution, which could increase the risk of unrest.

Age of Consequences focuses extensively on Syria as a case study, interrogating the role that drought played in an already fragile system that just needed one more shock in order to collapse. The film argues that ISIS promises hope of a better life to recruits who are disillusioned, perhaps unemployed, or unable to feed their families. Food insecurity and scarcity of resources, the film argues, offers one more opportunity to advance one’s agenda.

The documentary’s arguments are more convincing in some instances than others, partly because an otherwise quite measured take on the role of climate change in unrest globally is often packaged so dramatically that there’s a disconnect between the balanced narrative and the impact of the presentation. There is a sense, at times, of a message being hammered home with perhaps unnecessary vehemence, which is a pity, because the insights offered are usually sound or, at the very least, worth considering. Beyond the abovementioned, however, there are other worthwhile insights: the effect of environmental damage on the gender gap, for example, in communities where women are heavily reliant on farming for income. There’s also a recognition of the stretching of aid resources – the US military’s disaster response is already facing capacity issues. Regarding refugees, the film argues that the world is facing a serious refugee crisis, but many refugees are hosted by the world’s poorest countries. In short, climate change doesn’t only act as a catalyst for conflict. It also strains the resources we have to support the victims of conflict.

Age of Consequences includes some disturbing, if fascinating footage, and portrays a variety of human suffering in depth. It does not offer solutions to the problem it dissects, which can be frustrating. But it’s a fresh take on a much debated topic, and it’s likely to stay with you for some time. DM

Age of Consequences will be screened at the Annual SA Eco Film Festival in Cape Town on March 25 and 28. Daily Maverick is a media partner for the Festival. For more information and a full programme, visit http://saecofilmfestival.com/.