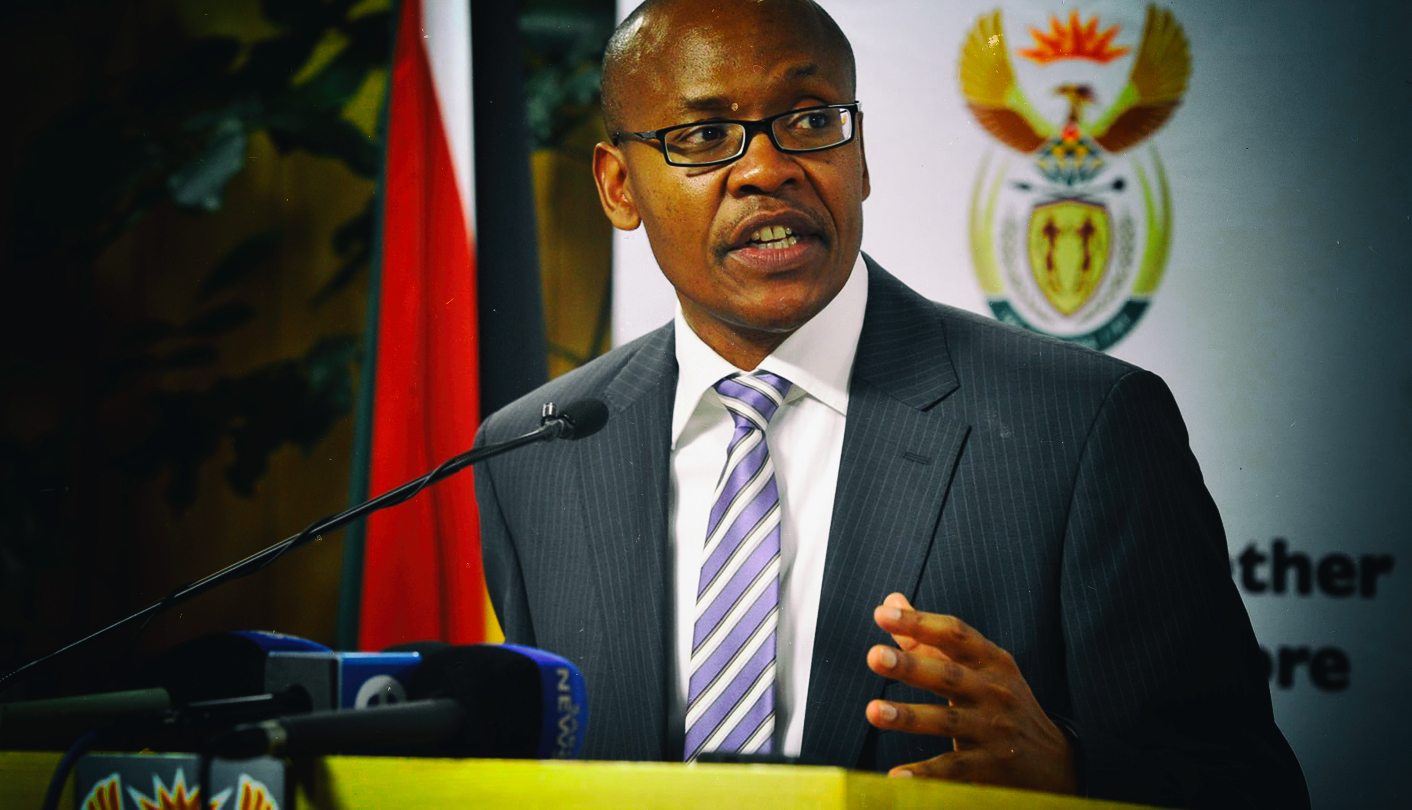 Patronage and political agendas are not that sophisticated in South Africa. Scratch the surface and the network that connects a very vocal faction in the ANC, “paid twitter”, the “white minority capital” avengers, some state agencies and the Gupta family becomes evident. Despite an exhaustive campaign by the Guptas’ PR agency Bell Pottinger to manipulate public opinion, this has not worked. But the primary target of this network remains the finance ministry. The most recent attempt to discredit Finance Minister Pravin Gordhan is to project him as unhinged. Once you follow the money trail, however, the agenda of people like crusader-in-chief Mzwanele (Jimmy) Manyi is exposed. By RANJENI MUNUSAMY.

It is sometimes forgotten that we have a “planning, performance monitoring and evaluation” ministry in government – based in the Presidency, in fact. The performance monitoring and evaluation portfolio was established in 2009 to ensure better coordination of government programmes and oversee the implementation of delivery across the state. One key responsibility was to draw up performance agreements between President Jacob Zuma and each of his ministers.

The South African public has never been privy to the agreements and we are not told whether they are in fact evaluated on the basis of their performance. At a time when Zuma is pondering a reshuffle of his Cabinet, surely the performance agreements should be the basis on which he decides who should stay, be moved or be fired from their portfolios.

If the performance of ministers is in fact being evaluated by Minister Jeff Radebe’s office, one has to wonder what the assessment is of Social Development Minister Bathabile Dlamini. Dlamini’s incompetence and mismanagement of the social security system is endangering the livelihood of millions of vulnerable people and could prompt widespread social upheaval in the country in a month. She appears to have no appreciation of the extent of the crisis at her hands, and believes an extension of the Cash Paymasters Services contract, which was found to be invalid by the Constitutional Court, is all that is needed to offset the problem.

It has been a struggle to get straight answers from Dlamini and her department about what they intend to do to make sure 17 million people receive their grants from April 1. Her focus is clearly elsewhere – discrediting Gordhan and the National Treasury, and running Nkosazana Dlamini-Zuma’s campaign for the ANC presidency in her capacity as ANCWL president.

The performance agreement of Communications Minister Faith Muthambi would also make fascinating reading, presuming it exists. Muthambi has been a disaster in her position, failing her own party’s mandate on issues such as digital migration. She has displayed arrogance and defiance at all attempts to hold her accountable. The parliamentary ad hoc committee on the SABC board inquiry recommended that she be removed from her position for, among other things, interfering illegally in board matters and lying to Parliament.

On Tuesday Muthambi again showed disdain for Parliament when she failed to appear before the Communications portfolio committee where the SABC’s annual report was being discussed. Despite her constant belligerence and terrible performance, she has somehow survived in her job, even outlasting the hitherto invincible Hlaudi Motsoeneng.

While some ministers have been genuinely awful at their jobs or severely compromised, as in the case of Mineral Resources Minister Mosebenzi Zwane who lied about a Cabinet resolution, it is bizarrely others who are under political attack, mostly from within the ANC.

Cabinet ministers who motivated at an ANC national executive committee meeting last year for Zuma to step down from office and those from the South African Communist Party who have been critical of the president, the premier league faction and the Guptas, are at risk of losing their jobs.

Gordhan and his deputy Mcebisi Jonas, however, are the primary subjects of attack from the network allied to Zuma and the Gupta family. They include the ANC Women’s League and ANC Youth League, a gallery of attack dogs rallying under a campaign against white minority capital and security agencies in government. Former Eskom chief executive officer Brian Molefe is seen to be the saviour of this group. They are determined to install him either as minister or deputy minister of finance, where he will be able to crank open the National Treasury and loosen the strict controls that Gordhan and his team have in place.

Removing Gordhan would also alleviate the pressure on the Commissioner of the South African Revenue Service (SARS) Tom Moyane. The two have a highly acrimonious relationship that seemed to worsen last week after Gordhan pointed out in the Budget speech the revenue shortfall of over R30 billion would be SARS worst performance since 2009. Gordhan also told a pre-Budget media briefing that he and his team had held a series of meetings with the SARS management over the past few weeks to deal with problems at the revenue service.

Then last week, a series of letters between Moyane and Gordhan were leaked to the Mail & Guardian, exposing the full extent of the animosity. On Friday, Moyane held a media briefing claiming the leaks came from Gordhan’s office and requested intervention from Zuma to heal the rift. Moyane said he wanted the State Security department to investigate the leak of the letters.

But the leak clearly plays in Moyane’s favour. He projects himself as a victim of the feud in the letters and paints Gordhan as a tyrant who is petty and abusive.

“I ask myself every day what have I ever done to you that has made you mistreat and beseige me as if I am a little boy,” Moyane wrote, saying elsewhere that Gordhan refused to shake his hand. In one of the letters, Moyane accused Gordhan of subjecting him to “horrible and intolerable working conditions”. “Your ill-treatment towards me has directly caused my ill-health,” wrote Moyane.

Gordhan did not respond to many of the letters.

One organisation that has taken particular interest in this spat and Moyane’s claims is Mzwanele Manyi’s Progressive Professionals Forum (PPF). In a statement on Tuesday the PPF said they were “perturbed” by Gordhan’s treatment of Moyane.

“Such complaints about Min Gordhan’s demeaning of black professionals is well known in the professional circles, hence the PPF decided that it has gone too far and needs to be addressed as if he is not called upon on his unprofessional behaviour, he continues to conduct his reign of terror on especially black professionals and further divide SA [sic],” the PPF said.

“While Minister Gordhan is famous in the professional circles for flaunting his struggle credentials to intimidate people, his behaviour this time is also demeaning as Mr Moyane is himself a respected and respectful freedom fighter.”

“PPF has no option but to conclude that Minister Gordhan suffers from professional jealousy, an egoistic feeling that him and him alone is capable of running an effective SARS, a dismal and hopeless endeavour to force facts, figures and history to lie or be distorted [sic].”

The hapless Manyi, who is desperate to position himself as a neo-day freedom fighter for black empowerment, having missed out on playing a role in South Africa’s liberation struggle, always seems to trip up on his transparent agenda.

In a written reply to a question from the Democratic Alliance (DA), Minister of Public Enterprises Lynne Brown revealed that Eskom and Transnet had given the PPF R840,000 in sponsorships. The DA’s David Maynier said he would ask the Auditor-General, Kimi Makwetu, to investigate the sponsorships by the state-owned enterprises.

“What this reveals is that Brian Molefe, who headed up Eskom at the time the ‘sponsorships’ were made, was effectively funding an organisation which was waging a ‘dirty war’ on the Minister of Finance, Pravin Gordhan, and National Treasury, as they probed suspicious contracts entered into by Eskom,” Maynier said.

The onslaught against Gordhan is so clumsy that in just one day the nexus between Manyi, Moyane and Molefe revealed itself without the finance minister having to do anything or the media having to conduct any serious probing. Like with the “paid twitter” offensive and the “white minority capital” front campaign, a lot of effort goes into trying to manipulate and sway public opinion with little results.

The Gupta family has turned a large contingent of people into their marionettes and pawns in their campaign to further capture the South African state. Not unlike the once infamous and omni-powerful Italian Masonic lodge, Propaganda Due, they have under their direct control large parts of the ruling party, security and business establishment.

In its heyday, Propaganda Due even helped little-known real estate developer called Silvio Berlusconi start his empire. They had the Italian Premier, Bettino Craxi, at their beck and call. They even controlled one of Italy’s most important newspapers, Coriere de la Serra, which they took over in 1977. Their members were also part of the juntas in Argentina and Uruguay.

They appeared all-powerful. They WERE all-powerful. And yet they were still busted in 1981 and their members sent to jail, with some managing to escape Italy into exile. This little piece of history should warn those who sold their souls in today’s South Africa.

If it were not for the reprehensible state-capture agenda and the repercussions for the future of our country, you could almost feel sorry for them. DM