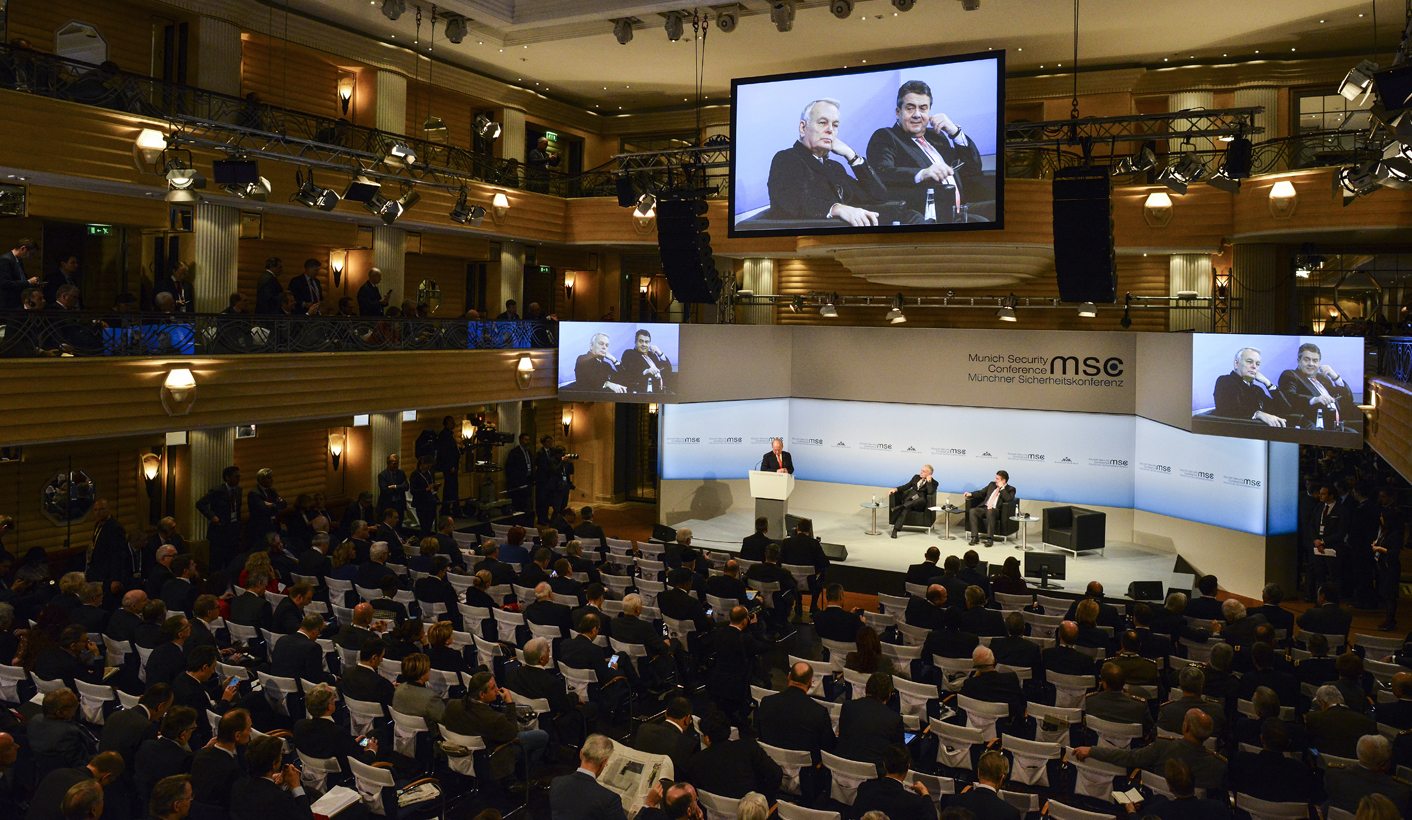 Key global security issues and elevating the US were discussed – but Africa was left in the blind spot. By Ottilia Anna Maunganidze for ISS TODAY.

When the weekend-long Munich Security Conference kicked off on February 17, two things were already clear. First, a new global world order could be in the offing, and second, the United States (US) would find a way to top the agenda. That these two things are directly related is not a coincidence.

Global leaders – mostly from Europe and the US – descended on Munich, Germany to attend the premier world security conference. From the onset, there was scepticism about what lies ahead. The accompanying Munich Security Report 2017 titled, Post-truth, post-west, post-order? reflected some of this, and outlined how complex challenges confronting the West really were.

These include the rise of (dis)information and fake news; leaking of classified information; the reality of (forced) migration; violent extremism; health security; and defence innovation.

These issues are of particular significance to Africa, but in the corridors, halls and meeting rooms of the conference, Africa was far from front of mind.

This despite the fact that there has been a noted surge in forced migration since 2013 from conflict hotspots in Africa, particularly from the Sahel, North Africa and the Horn. While many African migrants remain within the continent – with Ethiopia currently housing close to 750 000 refugees – tens of thousands do make their way to Europe.

Any mass migration discussion that fails to include a platform for Africa could only lead to insufficiently informed responses. While the European Union (EU) has recognised the need to engage with African countries on stop-gap measures, and working to find sustainable solutions to mass migration, this requires active partnerships and real coordination. A forum such as the Munich Security Conference could have benefited from a focused discussion on migration that directly involved African policymakers and experts.

Africa is also particularly vulnerable to violent extremism. With experiences spanning from Boko Haram in the west to al-Shabaab furthest east, several African countries have had to deal with the reality of terrorism for decades. This is often exacerbated by poor governance structures, increased inequality and marginalisation. Understandably, the threat that Da’esh poses in the Middle East has dominated conversations about terrorism in recent years. However, sidelining Africa in discussions about violent extremism leaves a blind spot in the collective consciousness of policymakers trying to craft suitable responses.

In crisis mode, though these issues were discussed, the main concerns for many remained Donald Trump and whether the West would remain a hegemony. Policymakers, experts and activists could not escape that the conference was happening at a time of perhaps the greatest uncertainty in modern global politics.

Whether it was talk of Syria, Russia’s dominance, Ukraine, violent extremism – or the rise in refugees fleeing to Europe – the challenges were clear, but the solutions less so. The conference tried to tackle these, with a particular focus on the role of the West. Uneasiness about failed responses was palpable.

Those present from the US, from Senator John McCain to, among others, Vice-President Mike Pence and Defence Secretary James Mattis, tried to quell fears about the new foreign policy orientation of the Trump administration. They reaffirmed that the US is still very much part of the North Atlantic Treaty Organisation (NATO) – and also its major financial backer.

However, uncertainty about Trump’s often erratic stance remained adding to the scepticism of whether the US is still a workable partner given the prevailing sense that people would rather wait for Trump to tweet his views than to believe his emissaries.

Unsurprisingly, just hours after Pence tried to reassure participants of the US’ continued allegiance with Europe, Trump lambasted Europe’s stance on migration and terrorism – citing Germany’s refugee policy and a made-up terrorist incident in Sweden. This unpredictability could likely continue to foment mistrust.

The question then becomes how, in a time of uncertainty and unpredictability, the world’s challenges can be addressed coherently.

At the Munich Security Conference – 54 years since the first one – the focus is still Euro-Atlantic. Many attending still believe that the transatlantic alliance – of which the EU and the US are key cogs – has the answers.

The focus was conspicuously on the role of Europe and the US in making the world a better place: a possible navel-gazing exercise that could mean losing sight of the rest of the world – to everyone’s detriment.

While critical issues affecting Africa, Asia and the Middle East were part of the discussions at the conference, they were hardly the focus – and participation from these regions remains significantly low. Africa, specifically, was given little attention – even though the range of issues discussed were directly relevant to and for the continent.

For her part, at least, Germany’s Chancellor, Angela Merkel, did try to make it clear that the world’s problems are interconnected and that nations – including those in Africa – must work together. Her view is that ignoring other regions would be perilous: a view reflected in Germany’s proposed new partnership between Africa and Europe for development, peace and a better future.

So, in order to address the world’s challenges coherently, the discussions (and discussants) should be truly global. Rwanda’s President Paul Kagame was one of few African speakers at the conference. While his contribution was critical for Africa and the world, it was drowned in the noise of Trump, fake news and panic over the rise of global powers from anywhere but the West.

If, as the conveners of the Munich Security Conference fear, we are indeed entering a post-truth, post-West, post-order era in global peace and security, then it may be time to be post-nostalgia too. Post-nostalgia means accepting that in 2017 discussions cannot mirror those in 1963 when the inaugural security conference was held. It also means involving regions that were not part of the traditional Munich mix as integral voices in discussions.

Decisions affecting Africa, the Middle East and Asia require that these regions be properly represented and consulted. More should be done by all involved. Part of that would be to ensure that African realities are given sufficient prominence. If the global world order really is shifting, then part of that realignment must involve recognising that the world is not just transatlantic – it spans southwards and eastwards too. DM