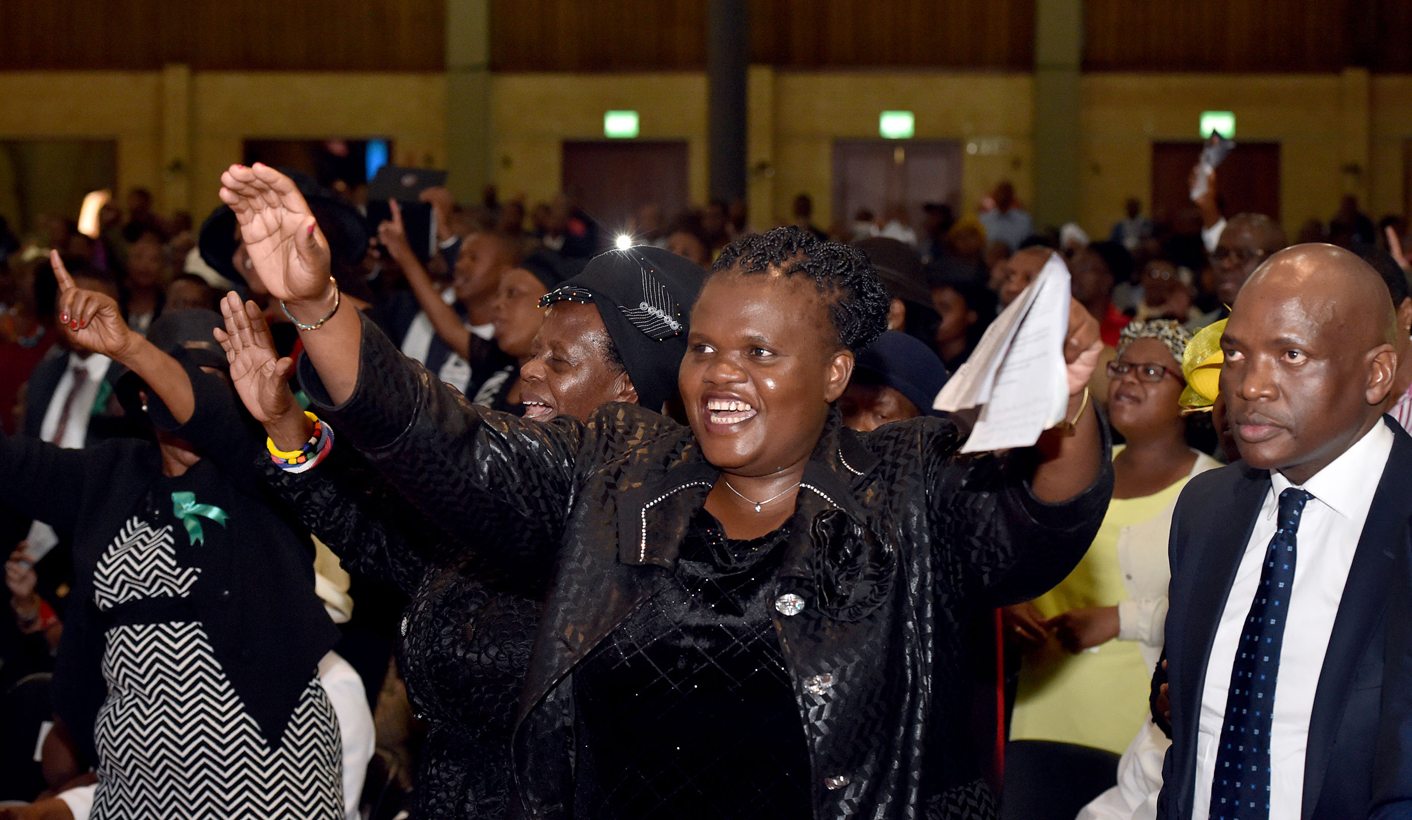 On Tuesday, there was little urgency by Parliament’s communications committee to appoint an interim board of the SABC. After listening for over five hours to SABC acting CEO James Aguma rationalising the public broadcaster’s financial haemorrhaging, MPs took less than 15 minutes to nominate 17 people for five interim board positions. The parliamentary inquiry into the SABC says this board must implement a swathe of recommendations, including forensic audits and probes into State Security Agency (SSA) activities at the SABC. Then Tuesday’s committee meeting was adjourned with chairperson Humphrey Maxegwana urging all to caucus for consensus on candidates “so we don’t go to extremes of voting”. By MARIANNE MERTEN.

While an argument might be made that the SABC board was really defunct for the better part of two years due to the controversial removal of three of the 12 non-executive members and the failure to replace another three who had resigned, the SABC board ceased to be in December.

That’s when the last standing board member, chairman Mbulaheni Maguvhe, resigned in the midst of the parliamentary inquiry into the state of SABC affairs. The other five remaining board members had fallen like dominoes since October 2016 as public and political scrutiny of the SABC ratcheted up amid the controversial ban on filming of destruction of property and protests in the run-up to the August 2016 local government elections.

In terms of the Broadcasting Act, the SABC requires a board, which is its accounting authority, and without which the public broadcaster’s governance structure is non-operational.

That there has been no board since December should have set alarm bells off among the communications committee tasked to oversee the public broadcaster. It would be tenuous to argue that MPs could not act until the final report of the parliamentary ad hoc committee SABC inquiry was formally adopted in the House.

It remains unclear why the communications committee has not vigorously pursued its role in appointing the interim board, as it is empowered to do in law. The political winds in the governing ANC have changed – as have many of the party’s MPs on that committee – after being embarrassed by the public outcry over the pre-municipal poll SABC censorship, and the public broadcaster’s flouting of the Independent Communications Authority of South Africa (Icasa) order to reverse the ban on reporting violence.

But Parliament’s role in the SABC’s decline was succinctly put by the parliamentary SABC inquiry that finished its work last week.

“The committee acknowledges that Parliament may have relinquished its constitutional duty to hold the executive and consecutive SABC boards to account. This may have rendered Parliament complicit in the gradual decline of good governance, accountability and commitment to public broadcasting at the SABC,” says the ad hoc committee’s report, published in the Announcements, Tablings and Committee Reports (ATC), or Parliament’s record of work, that was made available on Tuesday.

The state of ill-governance, financial troubles, political interference and the intimidation of staff have been under the spotlight of the ad hoc committee’s inquiry since late 2016. Its final report completed on Friday noted, “the SABC’s primary mandate as a national public broadcaster has been compromised by the lapse of governance and management…”

Trailing a series of corporate governance and fiduciary failures, procurement violations and questionable deals like the MultiChoice agreement to access the SABC library in return for two DStv channels, or the New Age business breakfast, the committee’s report also has rejected the latest version of the memorandum of incorporation (MOI), dated May 2014.

That MOI is key to findings of political interference. The MOI was cited as the justification for removing three board members, who reportedly spoke out about some of the SABC shenanigans, by using the Companies Act, not the 1999 Broadcasting Act that clearly states in Clause 13(1) that non-executive board members are “appointed by the president on the advice of the National Assembly”.

The parliamentary SABC inquiry found that the May 2014 MOI signed off by Communications Minister Faith Muthambi was invalid, not only because it effectively supplanted the Broadcasting Act, but also because it had never been submitted, as it must be, to the Companies and Intellectual Property Commission (CIPC).

And so the inquiry found that “the minister displayed incompetence in carrying out her responsibilities as shareholder (government) representative. Evidence suggests major shortcomings in the current shareholder representative’s conduct, particularly in her apparent failure to lodge the October 2014 amendments to the MOI and her role in Mr (Hlaudi) Motsoeneng’s permanent appointment as COO (chief operations officer)”.

It recommended: “The president should seriously consider the desirability of this particular minister retaining the communications portfolio.”

Other recommendations require an SABC interim board to be in place to act to clean up governance, finance and editorial independence issues. But the ad hoc committee’s inquiry relies on its communications committee colleagues to appoint that interim committee.

However, MPs on that committee appear willing to take their time, even if Tuesday’s meeting made it clear that the SABC’s top brass could no longer expect the easy ride they had received previously.

Discussions on the 17 names were postponed to another committee meeting. While committee agendas are subject to change, according to the latest available the Z-list of committee meetings, room has yet to be made for settling on the SABC interim board members in a programme that until the end of March includes interviews for vacancies at Icasa and oversight visits.

There are former board members Rachel Kalidass, one of the three controversially removed using the Companies Act; Krish Naidoo, who resigned in early October, and David Niddrie who resigned from a previous board in 2010.

Editors nominated include Mathatha Tsedu, who recently stepped down as executive director of the South African National Editors’ Forum (Sanef), Power 98.7 manager Mpumelelo Mkhabela and, perhaps most controversially, the ANC nomination of Steven Motale, former Citizen newspaper editor who in August 2015 wrote a public apology to President Jacob Zuma for being part of a “sinister agenda” against the president. (Motale was fired by Caxton in 2016 – Ed)

Whoever finally gets the nod to serve on the interim SABC committee, whose lifespan as a board member is legally limited to six months, faces a tough task, and not only with regards to the implementation of hard-hitting recommendations of the parliamentary inquiry into the public broadcaster.

Aguma told MPs the SABC recorded a R411-million loss for the 2015/16 financial year. Cash balances dropped to R881-million, from R1.017-billion, over the same period. While in the first quarter of 2016 to the end of June net losses stood at R178-million, losses of R256-million were recorded during the second quarter to the end of September 2016.

Aguma argued that much of the financial situation arose from historical factors such as SABC policies not being aligned properly, staff retirement costs, the exorbitant price of sports and other programming the public broadcaster is obliged to acquire in line with its licence conditions, and the millions of rand spent on “unforeseen events of national interest” such as deaths of prominent people.

But it also emerged that the SABC, which has been tied up in a series of court cases involving Motsoeneng, has legal insurance for its executives and officials:

“We have outsourced the risk,” said Aguma.

Instead he spent quite a bit of time on troubles with the television licences database. It was devalued from R23.8-billion to R6.1-billion after a clean-up to remove 400,000 accounts which were no longer valid. Reasons included death, or that the television owner actually was a foreign national who had bought a television in South Africa before leaving the country, he added.

“We took the liberty to run MPs (through the television licence database). The figures are interesting. I will slip a note to the chairperson,” he quipped, although there were no smiles from the parliamentarians.

There was little sympathy, even from the ANC whose MPs Nokuzola Tolashe and Mondli Gungubele, the former Ekurhuleni mayor, both questioned financial and governance standards. As Gungubele argued: if good governance were in place, the SABC would have delivered. Or as Tolashe put it to the executives: why did the SABC not plan for local government election coverage, rather than complaining it received not a cent for its R32-million expenditure, as these elections come round regularly every five years?

Meanwhile, Faith Muthambi apologised for skipping the communications committee meeting at short notice, according to Maxegwana. She accompanied President Jacob Zuma who, according to a presidency media statement, on Tuesday took “the fight against crime to Soshanguve Block L… as part of the 2017 radical socio-economic transformation programme”. DM