GroundUp: For R5,000, sangoma will pray for an informal miner’s safety 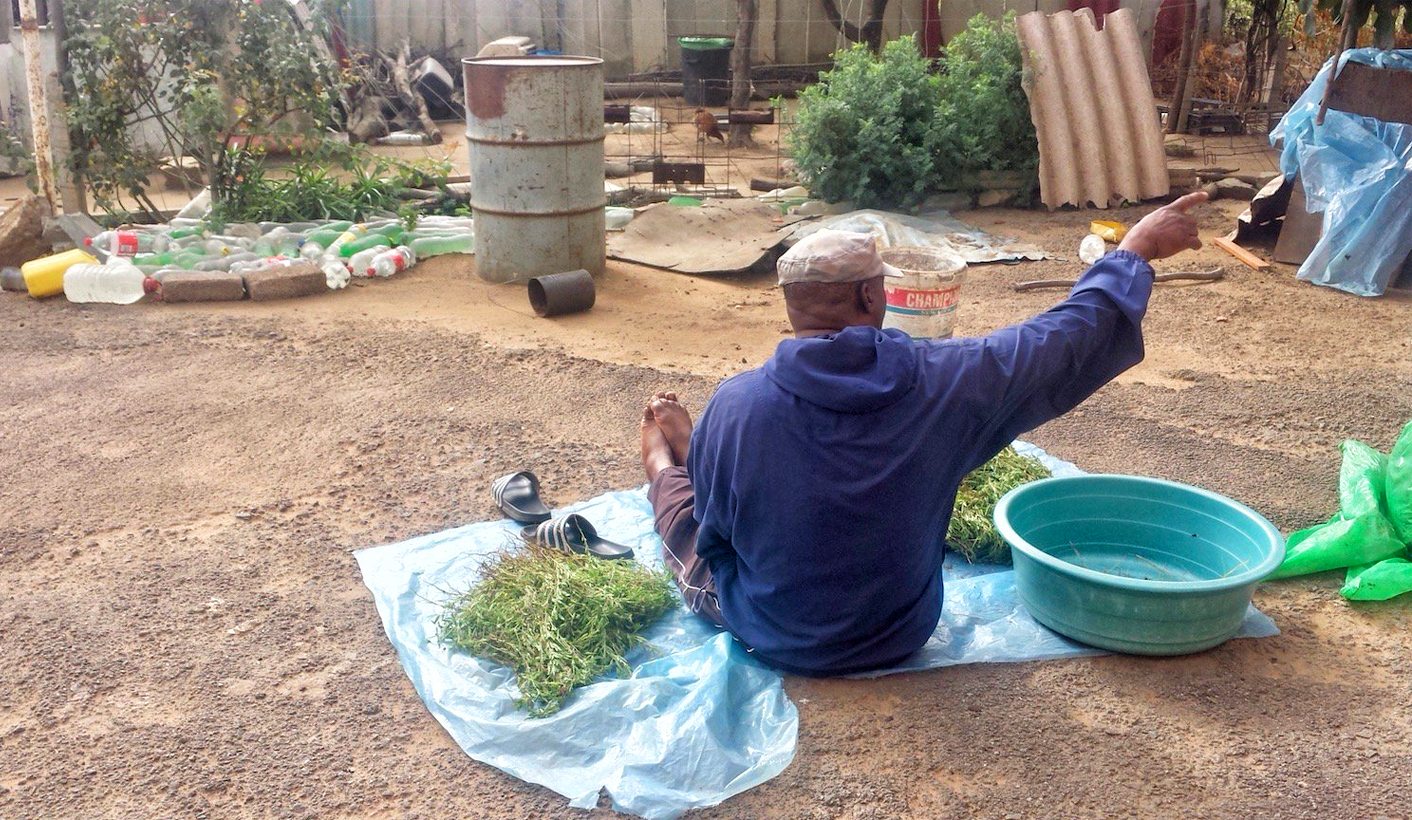 A traditional doctor has struck gold with the fears of miners who work the dangerous, disused mines in the hope of finding gold. He also “helps” the buyers of the ore. By Ray Mwareya and Tichaona Jongwe for GROUNDUP.

He calls himself Sekuru Ziso – in Shona, “the grandfather who sees”. He is 55 years old, a fortune teller and a traditional doctor.

He has come from Chipinge, a district in south-east Zimbabwe, known for its herbalists, attracting people from as far afield as South Africa, Namibia and Botswana.

“I came to South Africa first in June 2016,” says Ziso. “I was told business is brisk among ‘illegal’ gold miners.”

He says he has already been deported once, after rival South African sangomas alerted the police that he was an undocumented immigrant.

His customers are scores of young Zimbabwean men who risk life and limb working the disused gold mines on Gauteng’s East Rand, in Barberton in Mpumalanga and Welkom in the Free State. It is dangerous work. It is also governed by luck; the chance of finding gold.

It is not surprising then that some turn to men such as Ziso. They believe he speaks to their ancestors to guarantee their safety. He burns incense, sprays “magic water”, shakes dried rabbit bones. These tools of his trade are called hakata meaning “drop message”.

Ziso says he has been telling fortunes since he was 16.

“I didn’t attend a sangoma school like you do here in South Africa,” he says. “I’m chosen by (the) ancestors. I can’t read or write fancy words, but I can chat to your ancestors, and thus predict tomorrow.”

When GroundUp visits him, he is making a concoction for his clients who are planning to slip into a mine in Randfontein on Gauteng’s West Rand.

“This operation needs stronger, fresh incense to guard the boys’ spirits, because I see in my dreams this mine is policed by uniformed men with black guns,” says Ziso.

Ziso has different rates for various “levels” of protection. “Level one,” he says, “I pray to protect young men from maphogo mine guards in less rich mines.” (The maphogo are security guards on patrol in the gold mines on the East Rand.)

“Level 2, I pray to prevent rock falls from hurting the ‘boys’ at rich mines like Welkom. This service, I charge R2,000.”

He tells the miners, “Never go to these mines without my prayer beads. I need to watch your ancestors while you are working underground.”

“Level 3 prayer is my highest … I work the spirits of high value gold buyers and miners who try to enter rich legal mines like the ones in Carletonville town.”

Sekuru Ziso concedes that he plays on the emotional fears that diggers have about entering old, crumbling mines and calms their nerves with prayers.

A 25-year-old miner who operates in Barberton, says he refuses to consult or pay for Ziso’s services. “I’m a Christian. His rituals are helpless gimmicks. He crooks people out of their money, I think. I don’t need his salts under my feet.”

Ziso has a service for the gold buyers too he explains: “I plant my dry chicken bones in their homes so that when they are smelting the gold ore, police or sophisticated robbers can never visit them.”

A gold buyer who operates illegally in Bekkersdal, says: “Sekuru Ziso is my man when you want a prayer to prevent mine police from fishing out my ‘boys’ working underground.”

He helps Ziso’s prayers come true by paying off the corrupt mine supervisors (he claims the bribes cost up to R30,000 a year). They help him smuggle up to five diggers at a time into the tunnels of mines still in operation. The miners enter wearing helmets, overalls and torches to look like employees.

After working underground for up to three months, playing hide and seek with the mine guards, each of them repays the gold buyer the R30,000 bribe, plus a commission of about R15,000. It is lucrative. Continued arrests, rock falls and deaths don’t stop the trade.

“I bought Ziso a maize grinding-mill machine back home in Zimbabwe when his prayers helped my illegal miners win a court case and get released from jail,” claims the gold buyer. He pays Ziso R5,000 to “clean his boys’ spirits”.

Edgar, a 27-year-old immigrant from Zimbabwe, who successfully slipped into a mine in Carletonville and made enough money to buy a lorry, says: “Sekuru Ziso rituals work for me. Last time we went down Carletonville Mine, he bathed us in a bucket of paraffin, naked for two hours. He said the paraffin’s strong smell would wash away bad spirits and mine rock falls. We believe him. That is why we pay.”

Ziso says: “Whenever your relative or friend, an illegal miner is arrested – just bring to me a piece of his clothing and R1,800.”

“I spray my incense water on his clothing and pray with the garment in the mountains for a day,” he says, pointing to a low hill on the N3 to Durban, just outside Alberton, Gauteng.

Ziso initially set up a herbal street stall at Duduza Mall in KwaThema on the East Rand. He was unable to protect himself from arrest as an undocumented immigrant and was deported to Zimbabwe in January after spending three weeks at Lindela Detention Centre in Krugersdorp.

“In the evening, I was back across the border, in South Africa,” he says. Two gold buyers in Springs paid R3,000 for a smuggler to ferry him back.

Ziso says he is making a good profit and saving money to buy cattle when he returns to Zimbabwe at the end of 2017.

He came to South Africa because he struggled to compete with churches. “Pentecostal churches, miracle churches,” he sighs and shakes his head. “They are drawing too many people to mega-money churches, virtually killing sangomas and herbalist businesses in Zimbabwe.” DM