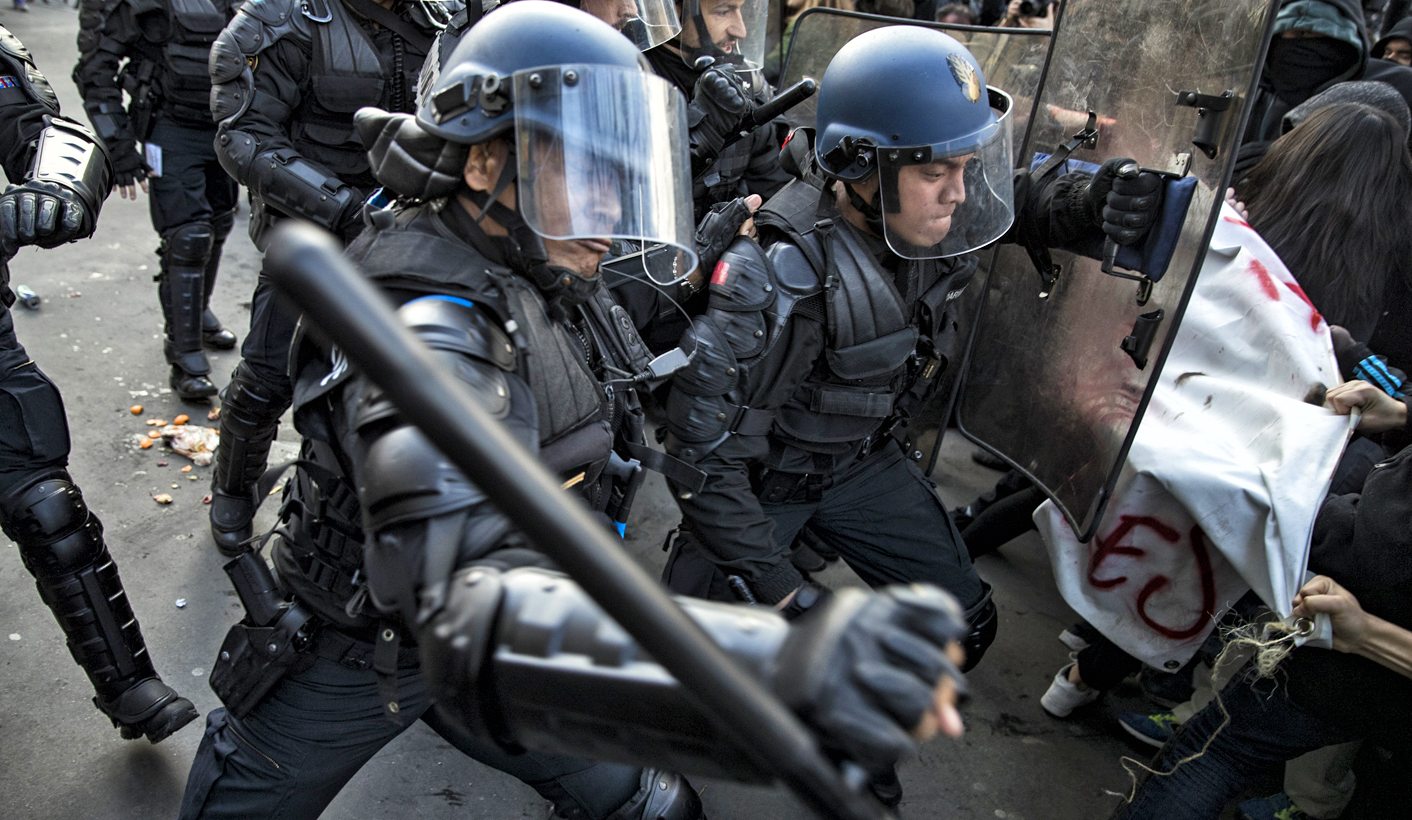 The brutal assault and rape of a black youth worker in the Parisian suburbs lays bare the poor relations between French police and local communities, relations that are both a manifestation and driver of broader socio-economic and political cleavages in France. By Carilee Osborne for S-RM.

On 2 February 2017, a young black man with no criminal record, known only as Theo, suffered extensive injuries after police officers reportedly assaulted and raped him with a baton in a Parisian banlieue. The incident has prompted weeks of, sometimes violent, protests, reminiscent of the 2005 riots. During these riots, more than 9,000 cars and public buildings were set alight over police brutality, sparking a countrywide state of emergency.

Theo’s case further follows many similar, more recent incidents of alleged police brutality in the banlieues. These include the July 2016 death of Adama Traoré in police custody and the alleged rape with a baton of a man known as Alexandre in the same neighbourhood as Theo in 2015. While these incidents highlight how little has changed in the state’s approach to French banlieues, they are also indicative of broader political and social divisions in France, likely to be at the heart of the first round of presidential elections this April.

Banlieues are the focal point for such divisions. While “banlieue” directly translates to “suburb”, these areas have become synonymous with slums, typically dominated by immigrants and viewed by outsiders as a place of crime and unemployment and characterised by run-down housing projects. These housing projects are known as Cités and were built during the post-war period on the peripheries of major cities. Originally seen as progressive accommodation for workers, they have largely fallen into disrepair. As these areas house many racial, religious and ethnic minorities, they have come to mark the physical segregation of French cities, something most apparent aboard the Paris metro, with the racial demographics of passengers changing significantly within 30 minutes of the city centre. Former Prime Minister Manuel Valls himself has acknowledged this segregation, noting that the country is facing “social and ethnic apartheid”. According to recent interviews, many in the banlieues resent this stigmatisation as much as their associated socio-economic hardship, noting they are treated as stereotypes.

The police have regularly been accused of racial profiling in the banlieues, reportedly stopping men of colour, frequently without reason, in a similar policy to “stop and frisk” in the US. A report released in January 2017 by the French police ombudsman has further indicated that 80 percent of those stopped by police in 2016 identified as Arab or black. Similarly, in 2015, the appeals court ruled that police had unjustifiably carried out identity checks on people from ethnic minorities, highlighting the poor relationship between police and local communities, particularly in economically disadvantaged areas. Such incidents speak to the wider sense of alienation between ordinary people and the elite, a malaise evident on both sides of the Atlantic and that continues to fuel far-right populism.

Major attacks in Paris and Nice, along with the Europe-wide migrant crisis, have contributed to this alienation and stigmatisation. With at least 21 Islamist-inspired attacks reported in France since 2012, police and the public remain on edge. The perception of a link between terrorism and socio-economic conditions in the banlieues was exacerbated after the January 2015 kosher supermarket attack, which was tied to the Charlie Hebdo shooting. The assailant reportedly grew up in La Grande Borne, a banlieue where roughly half of residents live below the poverty line. The connection, however, is rarely so straightforward, particularly as many perpetrators of terrorist attacks come from middle-class backgrounds.

Multiple other factors also play a role in police brutality, including France’s rigid commitment to secularism. This is important in understanding the contemporary French situation. Developed during the French revolution as a way to break free of the Catholic Church and the monarchy, laïcité is a strict separation between Church and the state and is enshrined in the French constitution. Crucially, it calls for a prohibition on expressions of religion in the public sphere. In many ways, police are at the frontlines of this, called upon to enforce this secularism. Nowhere was this more apparent than with the so-called “burkini ban”, which prompted armed police to forcibly remove the burkini off a woman in Nice in 2016. The reason cited by French police at the time was that she was not wearing “an outfit respecting good morals and secularism”,

Poor community tensions have prompted significant retaliatory violence by both the police and local communities in recent months. La Grande Borne, for example, has been the site of such tensions in myriad ways. On October 8, 2016, a police patrol car was ambushed in a sabotage attack at an intersection known for drug trafficking and violent robberies in the area; four police officers were wounded when a group of 15 assailants attacked the cars, throwing petrol bombs and stones at them. Thereafter, in October 2016, hundreds of police officers themselves staged major protests in Paris. Demonstrating in uniform and in patrol cars, police blocked off parts of Paris’s Champs-Élysées to denounce poor resources and violence towards them. Similar protests were held in Marseille, Nice and Toulouse.

A judge in Bobigny is yet to decide whether the police implicated in Theo’s attack will face prison time. All four officers are currently suspended but, regardless of the outcome, piecemeal justice is unlikely to heal the fractured police-community relations that are clearly indicative of deeper fault lines in French society. Rather, these cleavages are likely to only deepen with the upcoming presidential elections, the results of which remain highly uncertain. Far-right candidate Marine Le Pen has frequently used divisive rhetoric to champion an anti-EU, anti-immigration agenda. Her response to the attack on Theo was to back the police unconditionally and refer to protesters as “gangs of scum”, a move likely to further anger banlieue residents. Le Pen has also promised police that she will increase their power and resources; approximately half of the police force now state that they will back her party in the elections, according to recent polls. While national polls have put centrist candidate Emmanuel Macron ahead of Le Pen in a second round head to head, the legacies of Brexit and Trump have cautioned against trusting such results.

Successive left and right-wing administrations have ultimately failed to improve the situation in the banlieues. Indeed, the dominant proposal of presidential candidates on the matter has been to increase policing and roll out more civics and ethics classes. While these suggestions may be political shortcuts to temporary results, they are unlikely to address the complex and interrelated set of structural challenges undercutting these communities and, especially, their poor relations with police. DM

Carilee Osborne (@EuroPolRisk) is a Europe and North America-focused Analyst at S-RM, an international business intelligence and risk consulting company based in Cape Town. For a free subscription to S-RM’s quarterly Europe and North America Bulletin, which explores pertinent political, economic and security developments in the region, please click here.

Photo: French riot police clashes with protesters during a demonstration to support Theo and against police violence in Paris, France, 18 February 2017. Theo, a young man, was hospitalised for an emergency surgery after he was allegedly sodomized with a truncheon during a police check on 02 February 2017. The incident sparked violent protests in the Paris suburb, one police officer is now charged with rape. EPA/ETIENNE LAURENT