GroundUp: Court hears why nuclear deal should be stopped 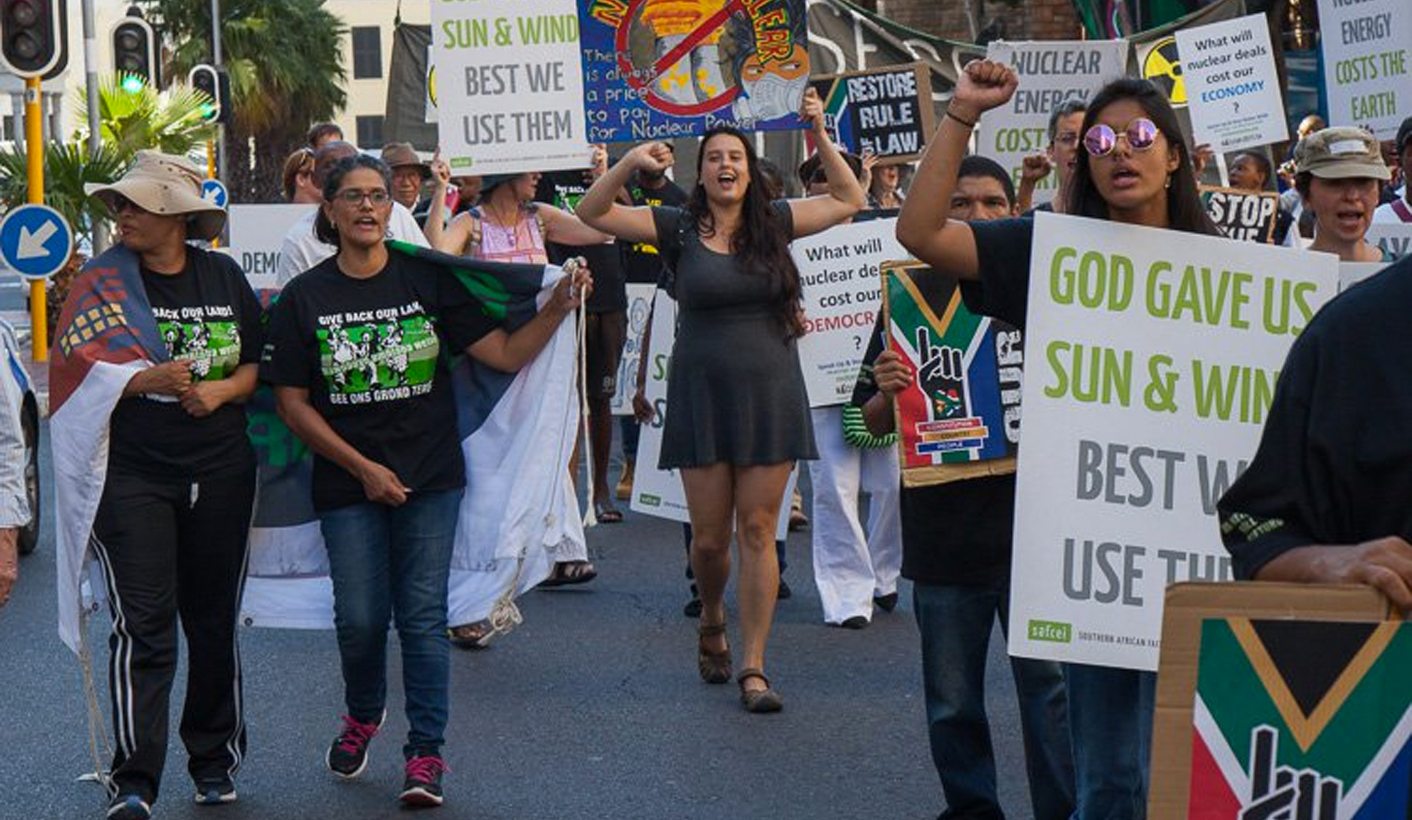 “We had the arms deal, we had Nkandla … it’s not the majority of South Africans that will benefit from this deal,” says activist. By Melanie Gosling and Ashraf Hendricks for GROUNDUP.

South Africa’s nuclear procurement programme was probably the biggest procurement that any country had ever undertaken, the Western Cape High Court heard on Wednesday.

NGOs Earthlife Africa and the Southern African Faith Communities Environment’ Institute are challenging the government’s deal to buy 9,600 megawatts of new nuclear power – about eight new power stations – and were back in court on Wednesday after proceedings had been adjourned in December.

While a group of colourful protesters gathered outside the court, holding anti-nuclear banners and chanting slogans, the proceedings in court 22 were sober and technical.

The litigants are asking the court to declare unlawful and set aside Energy Minister Tina Joemat-Pettersson’s signing of a nuclear agreement with Russia; President Jacob Zuma’s decision to authorise her signing the agreement, and the minister’s decision to table the Russian agreement under section 231 (3) of the Constitution. They argue the law required that it be tabled under section 231 (2), which would have meant the Russian document would have to be scrutinised by Parliament and that the public would have had a chance to comment on it.

The litigants are also asking the court to declare unlawful and set aside the minister’s determination in 2013 under the Electricity Regulation Act that South Africa needed to buy 9,600MW of new nuclear power, and a later determination in 2016 making Eskom the party responsible for buying the new nukes.

Much of the morning’s proceedings focused on whether the two determinations for more nuclear power made by the minister were mere policies or were administrative actions.

Unterhalter said the central thrust of the government’s defence was that the minister’s determinations were merely policy decisions and so beyond the review of the courts, as policy decisions had no effect and no consequences, whereas administrative decisions did.

Unterhalter argued that the minister’s decisions were administrative, but said even if the court found they were policy decisions, it made no difference to the case. “Even if it is pure policy, once it has effect, it has grounds for review,” he said.

The court heard that the National Energy Regulator of South Africa (Nersa) had failed in its statutory duties when it gave its concurrence with the minister’s determinations for more nuclear power. It was legally bound to give reasons in writing, based on facts and evidence, why it concurred. However, it had not done so. Nersa, an independent statutory body, had appeared to “be under compulsion simply to agree to the minister’s determination”, Unterhalter said.

Nersa had said it had agreed because it would be “bad faith” not to agree. This was an “obvious failure” under the Promotion of Administrative Justice Act. In making her determination for the 9,600MW of new nuclear power, the minister said she had done so by adopting the policy of the Integrated Resource Plan for electricity generation made in 2010. “There was no attempt to consider anything which had happened since 2010,” Unterhalter said.

This included that the 2010 policy was outdated, and a new policy was in the process of being drawn up; that the demand for electricity had fallen, and that there had been a steep drop in the cost of renewable energy.

One of the key points regarding the procedural unfairness of the nuke deal was that there was no form of public consultation.

Meanwhile outside court, about 120 people from various civil organisations protested against the deal. People walking from Parliament to the High Court shouting “down with the secret nuclear deal” and “down with state capture”.

Prof Yong-Bock Kim, President of the Asia Pacific Graduate School for the Study of Life and a prominent anti-nuclear power activist, told the protesters: “This Nuclear power plant is going to poison the whole earth.” Kim cited the 2011 Fukushima disaster in Japan and the 1986 Chernobyl catastrophe in Ukraine, the world’s worst nuclear accidents. Kim said these disasters have affected over 100-million people. “You are potential victims”, he said.

Vainola Makan, Provincial Organiser of the Right2Know Campaign, said that they were protesting because they were very upset that government had not consulted the public. “We are saying they must stop their games now, they must talk to the public. We are tired of talking to them through the courts,” said Makan. “We had the arms deal, we had Nkandla, we had this World Cup where they spent a lot of resources” she said. “It’s not the majority of South Africans that will benefit from this deal,” she said.

The case continues on Thursday. DM