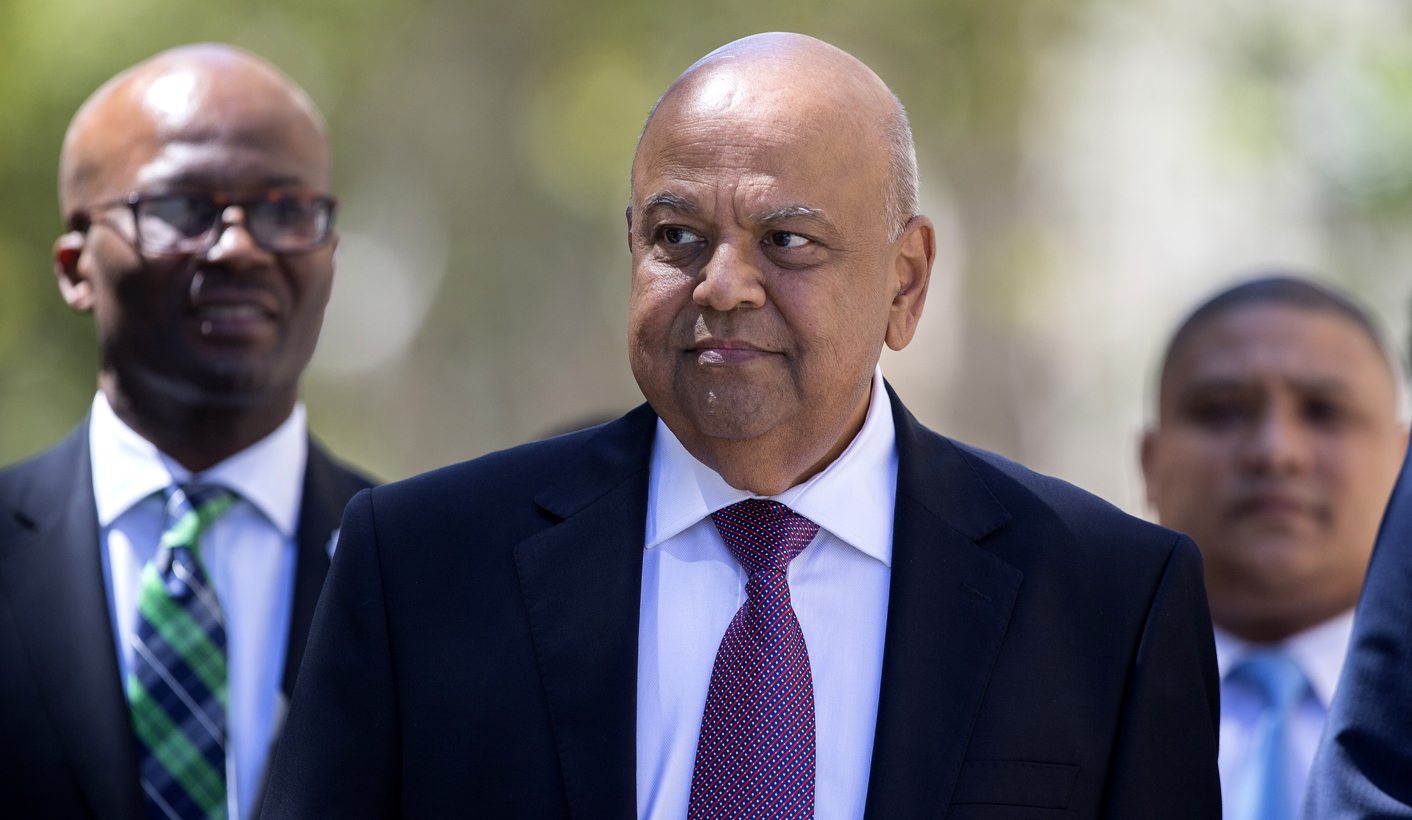 There wasn’t even much noise about the new 45% tax bracket for those earning over R1.5-million annually as political parties across the spectrum agreed that Finance Minister Pravin Gordhan delivered the best possible Budget in difficult economic times. The ANC welcomed spending on protecting the poor, education and fighting corruption. The DA wanted more detail on government spending cuts. The EFF was concerned at the scant movement on fighting bank collusion, or corporate corruption in general. But the finance minister had been crystal clear that there simply isn’t more money, regardless of anyone’s wish list, and if there are new needs, these must be funded from existing allocations. By MARIANNE MERTEN.

Finance Minister Pravin Gordhan talked transformation, but radical was largely missing. Instead, the emphasis throughout his 29-page speech on the R1.56-trillion Budget was on transformation and economic growth to bring every South African into the fold to realise the constitutional vision of equitably shared wealth and economic opportunities alongside rights to access housing, medical care, social security and basic services.

And one of the ideas now on the table is for a charter of economic rights to provide access to decent and well-paid jobs, training and retraining in the face of 21st century technology developments and a supportive environment for small, medium and micro enterprises. “Let’s think about that… and let’s get some consensus,” said Gordhan.

He took the podium in the House amid heightened political noise critical of National Treasury and its role in ensuring spending discipline. While the Budget process evolves over 10 months under the auspices of the ministers’ committee on the Budget and a slew of technical committees, some Cabinet ministers have voiced public complaints about National Treasury as an obstacle to transformation. These include Water and Sanitation Minister Nomvula Mokonyane and Small Business Development Minister Lindiwe Zulu, according to the Mail & Guardian.

The dearth of the word radical didn’t seem to worry the ANC. Its Treasurer-General Zweli Mkhize said there was no disjuncture with radical socio-economic transformation. “All of this (in the Budget) is what we need,” he said, adding that while taxes had to be raised, it is understood that the poor are protected. “He tried his best in these difficult times.”

Despite “very tight circumstances”, money was found for education, social grants and developmental programmes. “He was very strong on fighting corruption and (that) government must spend its money,” added Mkhize.

But the shift to emphasise inclusive economic growth for transformation was noted by opposition parties, whose criticism of the Budget focused on favourite topics.

DA MP and finance spokesman David Maynier noted there now appeared to be “competing agendas” and that this could in turn spark policy uncertainty. But he acknowledged that in the current political space – and that policy like that on state-owned entities is now situated in the presidency – had limited Gordhan. “The finance minister has very little fiscal and political space to manoeuvre,” said Maynier, adding that while the DA would have liked to have seen more details on spending cuts – and an overall spending review to cut bloated administrations – Gordhan had managed to consolidate the fiscal framework.

EFF leader Julius Malema described Gordhan as “a unifying figure in this difficult moment”, and said the Budget was “well-balanced and well thought out” even if the party would have liked to have seen more for the poor.

However, Malema’s worry was about corporate tax, which contributes less to government revenue than personal income tax.

“It shows they (corporates) are determined to make high profits,” he said, calling for radical interventions to deal with tax avoidance and action on bank collusion. “There’s a perception National Treasury is soft on corporate corruption, collusion of banks.”

IFP finance spokesperson Mkhuleko Hlengwa welcomed Gordhan taking “a step back from populism”, his “frank diagnosis of our problem” and what needed to be done. “What is evident is that National Treasury and the Presidency are talking past each other”.

United Democratic Movement (UDM) Chief Whip Nqabayomzi Kwankwa said that while there was nothing really new, the minister “tried to come up with a toned-down message of inclusive growth… that transformation can be done in a real inclusive way”.

National Freedom Party (NFP) Nhlanhla Khubisa said while the party would have liked to hear more specifics on jobs, the focus on education and social security is welcomed. Although tax increases are understood, the worry remained that the pool of taxpayers remained small.

African Christian Democratic Party (ACDP) MP Steve Swart said the Budget largely was a successful balancing act. “The true test will be whether investors and the ratings agencies are similarly satisfied, and whether (Gordhan) has the political support to implement his proposals,” he added.

While government expenditure ceilings were cut by R10-billion for the 2017/18 financial year, taxes were raised to generate R28-billion in shortfalls.

The new 45% tax bracket is expected to generate around R4.4-billion towards the overall additional R16.5-billion raised through taxes. A further additional R6.8-billion is expected to be generated by increasing to 20% – from 15% – the tax rate on income from dividends. And another R5.1-billion will be raised though indirect taxes such as higher sin taxes on alcohol and tobacco, alongside an additional 30 cents a litre of petrol in general fuel levy and 9 cents more a litre will be raised for the Road Accident Fund (RAF).

The tax hike is needed because tax collections have fallen by the biggest amount since the 2009/10 financial year, or R30.4-billion. Discussions are under way to address factors related to the South African Revenue Service (SARS) although also key are other dynamics related to a weak and uncertain global economic environment, dropping imports, changing trade relations and constrained consumer spending.

“Raising taxes when the economy is struggling is undesirable, but unavoidable, given the current fiscal circumstances. Government is acutely aware of the difficult economic conditions facing the majority of South Africans, but deferring tax increases by accumulating more public debt would ultimately impose a greater burden on citizens,” said the Budget Review.

“The tax system is quite crucial to redistribution” to fund, for example, the social grants paid to 17-million poor South Africans, said Gordhan in a media briefing ahead of presenting the Budget. “Without the transfer of resources from the well-off to the rest of society we will not have the social stability we’ve had.”

However, trade unions may not view the Budget proposals as sufficient for jobs. The proposals to cap the public wage bill, which accounts for 36% of government expenditure, through no replacement of those who leave and voluntary severance packages, are opposed.

Trade union federation Cosatu said the Budget showed government lacked a coherent, integrated and targeted plan to create and protect jobs. “At least 100,000 jobs must be created per month, Cosatu said, adding that “increasingly the jobs being offered to South Africans, especially low-skilled workers, are temporary, low-wage and through labour brokers”.

Cosatu’s statement added that while Gordhan “rightly said transformation must be mass based and not elitist”, he neglected to indicate how black economic empowerment (BEE), which was essentially elitist, would be changed. “Therefore, the Budget is ambiguous about whether radical transformation is possible, and if so, how and when will it be accomplished.”

The South African Communist Party (SACP) said it remained concerned about the impact on workers and the poor. But it welcomed the new tax bracket, that there was no increase in value-added tax (VAT), and the commitment to closer supervision of financial markets. “The importance to advance and deepen the transformation of the financial sector cannot be overemphasised!” it said in a statement.

Transformation, and on what government spends its money, remains contested territory. Amid the political noise critical of Gordhan and his team, the widespread silence even among those who may not like what is unfolding, the chess manoeuvres to get ex-Eskom chief Brian Molefe to Parliament, and a bruising run-up to the ANC’s national conference in December, it remains unclear how the chips will fall. DM