Xenophobia rears its head: Gauteng on a knife-edge once...

Xenophobia rears its head: Gauteng on a knife-edge once more 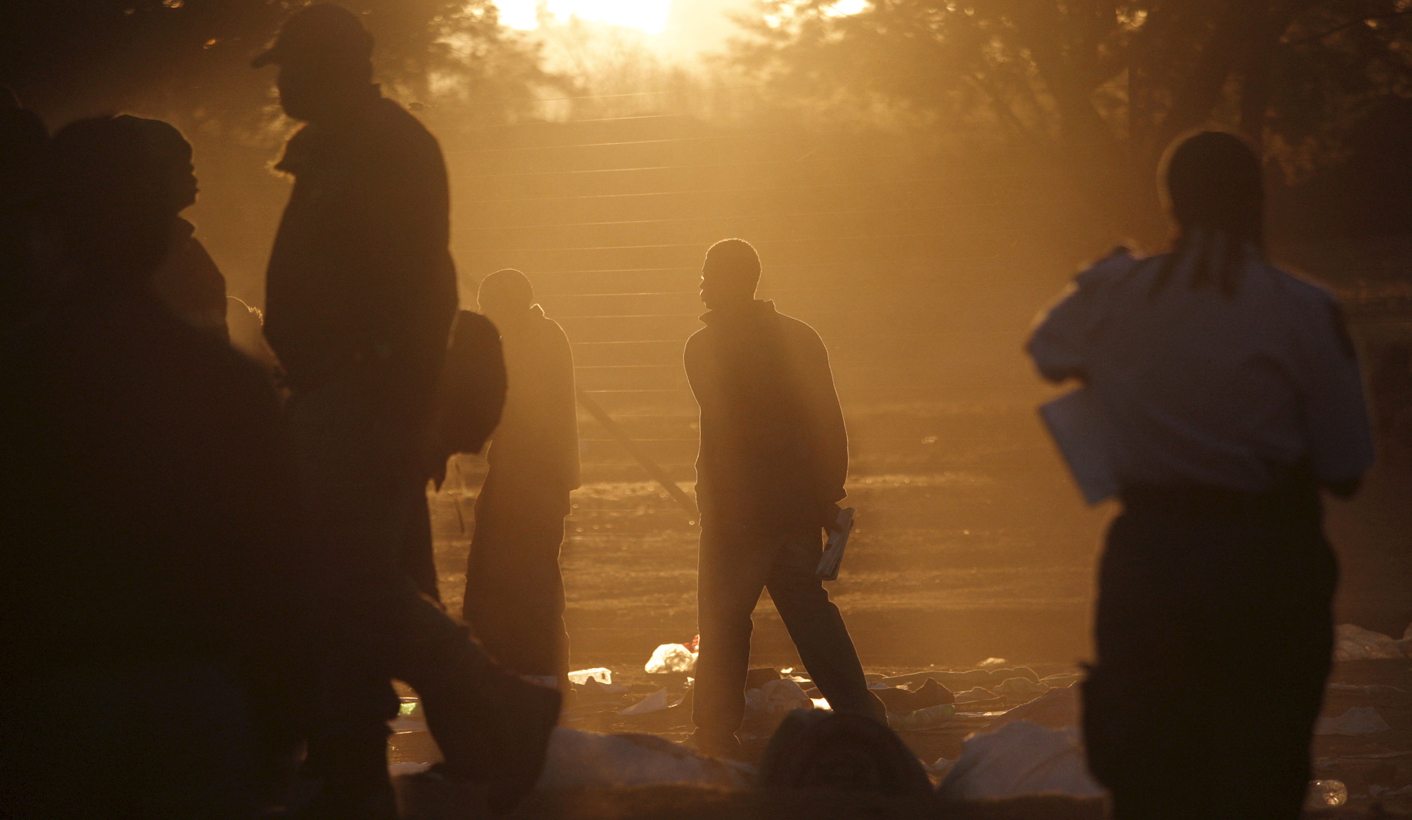 There are numerous indications that Gauteng is once again teetering on the precipice of xenophobic violence. Exhibit A: a flare-up of attacks on foreign-owned residences and businesses. Exhibit B: the registration of an explicitly xenophobic political party. Exhibit C: an anti-foreigner march planned for Friday. This is all playing out in full public view, so nobody can claim they didn’t see it coming. The question is: why isn’t anyone acting to stop it before it happens? By REBECCA DAVIS.

Mario Khumalo’s WhatsApp status reads: “Nationalism is the triumph of good over evil”. That seems fitting for a man who has registered a political party called South African First, whose stated mandate is to drive foreigners from South Africa. But don’t call Khumalo xenophobic.

“I’m not xenophobic,” the 37-year-old told the Daily Maverick on Monday. “I’m merely voicing what my fellow countrymen are saying. Some of us voice this while drinking whiskey behind closed doors, eating croissants and blue cheese. We cannot be people who have a problem, but cannot address that problem.”

The problem, in Khumalo’s view, is the presence of foreign nationals in South Africa. No sooner was apartheid formally dismantled, he says, than South Africa was expected to become the host for the rest of the continent.

Khumalo says: “Since 1994, we have never had a chance as a nation to sit down with our colonisers, talk about balancing the scales, and have a steak and wine.” (He talks about food quite a lot.) “People were not fighting to be liberated so the country could be overwhelmed by foreign nationals.”

Other African countries offered support to South Africans during the struggle against apartheid when they could ill afford it. Doesn’t South Africa have a moral duty to repay some of that hospitality?

“I don’t recall any South African going to another [African] country [during apartheid] and misbehaving,” Khumalo says. “Otherwise there would have been xenophobic attacks there too.”

Khumalo is at pains to state that he does not personally endorse xenophobic violence. He sees it, however, as the inevitable expression of the South African government’s failure to address the issue of immigration. It is not lost on him that he sounds like US President Donald Trump. “Let’s not pretend that this started after Trump,” he says. “This didn’t start yesterday. We have had a problem, but we have chosen to sweep it under the rug.”

Khumalo speaks with a distinct American twang, which he attributes to spending part of his childhood in America. Asked if others should be allowed to benefit from global mobility as he clearly has, Khumalo shoots back: “I didn’t go to America to sell pirated DVDs, deal nyaope, or turn young girls into prostitutes.”

To Khumalo, it’s simple: “Let’s allow South Africans to be the ones to eat first for now.”

Khumalo is not alone in his views, as recent events in Gauteng have shown. Last week violence erupted in Johannesburg’s southern suburbs in a dispute over “hijacked” buildings. The Sunday Times quoted DA councillor Tyrell Meyers as accusing foreigners of operating as slum lords without the necessary certification. Twelve foreign-owned or foreign-occupied houses in Rosettenville were torched by angry residents claiming the houses were used as drug dens and brothels.

GroundUp reported that during the violence a Malawian mechanic was beaten up by a crowd accusing him of being a Nigerian drug-dealer, before an Ethiopian-owned tuckshop next door was looted.

James Oatway, the photographer who captured the chilling image of Mozambican national Emmanuel Sithole being stabbed to death in 2015, tweeted this week:

“An orchestrated xenophobic campaign is taking place in JHB and Pretoria and nobody is doing anything about it”.

For the past weeks, blue flyers have been distributed around Tshwane. “Why is the government giving asylum-seeker status to Nigerians, Zimbabweans, Pakistanis?” they ask. “Is there war in Nigeria, Zimbabwe, Pakistan etc? Unemployment is at 34% in South Africa but they give people asylum-seeker status; when there is no work in South Africa, what do you expect them to do? They will commit crimes. Go to Spar, Cash Crusaders, Nandos, restaurants and other companies etc. It is only Zimbabweans and other foreign nationals working there. Where must South Africans work?”

The flyer is the work of a group calling themselves the Mamelodi Concerned Residents. It concludes: “Nigerians, Pakistanis, Zimbabweans etc bring nothing but destruction; hijack our buildings, sell drugs; inject young South African ladies with drugs and sell them as prostitutes. How is that helping us? They have destroyed our beloved Johannesburg, now they are destroying Pretoria.”

The group has planned a march against foreigners, to take place in central Pretoria on Friday. Tshwane police have not yet indicated whether permission will be granted for the march to proceed. National convenor Makgoka Lekganyane told Daily Maverick that this will not deter the group: “We will have the march on Friday. This issue must be raised. We are being discouraged from telling the truth.” He stressed that they wished the march to be peaceful.

The march aims to visit the departments of Home Affairs, Labour and Police to express grievances.

“Unemployment is high, and they give people asylum-seeker status. It must be stopped,” Lekganyane says. “The little jobs that are created, go to [foreigners]. Our borders need to be secured. These people need to be taken back to their countries.”

Like Khumalo, Lekganyane expressed frustration that South Africa was expected to open its borders to the rest of Africa immediately after achieving its long-sought democracy. He points out that countries like Nigeria and Zimbabwe secured independence decades before South Africa. “When was Nigeria free? When was Zimbabwe free? What have they been doing with their countries?” he asks.

Tshwane mayor Solly Msimanga assured the Daily Maverick on Monday that the City of Tshwane is “alive to the situation” and will be meeting with provincial police and the Gauteng MEC for Community Safety to “collaborate on a problem that is a challenge to the entire province”. Msimanga condemned “violent and xenophobic calls to community leaders to violently and unlawfully persecute foreign nationals within our jurisdiction”.

This assurance may not quell the anxieties of increasingly anxious immigrants.

Marc Gbaffou, chair of the African Diaspora Forum, released an open letter to the president, police, political party leaders and Home Affairs in late January appealing to them to condemn the planned xenophobic march. Gbaffou described the flyer’s rhetoric as consisting of “slanderous and defamatory attacks on the migrant communities mentioned”, and urged authorities not to allow the march to take place. The right to protest, Gbaffou said, had to be balanced alongside the prevention of speech that incites violence and hatred.

Gbaffou believes that one figure in particular is to blame for precipitating the rising tide of public xenophobia: Johannesburg Mayor Herman Mashaba, who railed against criminal foreigners in December.

“We believe that Mayor Mashaba made these pronouncements with the intention of making foreign nationals a scapegoat for the present and future failures of his administration in solving the numerous problems besetting the city,” Gbaffou recorded in his letter. “His utterances will have the effect of inciting xenophobic violence and mayhem against the migrant community. Already since he made his speech migrants are reporting that they are facing increased harassment from South African citizens.”

Mayor Mashaba’s office did not respond to requests for comment on Monday.

Xenophobia is a word the government has shied away from in the past, as a source of embarrassment negatively impacting its bilateral relations with other African countries. It will have to start facing the word once again.

Zimbabwe’s Sunday News recently quoted the Zimbabwean Home Affairs Minister, Obedingwa Mguni, as saying: “The government of South Africa has guaranteed the safety of our nationals. There is no way they will allow another episode of xenophobic attacks. I’m quite assured.” DM

Photo: Refugees are evicted by police officers from the side of a major road in Johannesburg, South Africa, 28 July 2008. EPA/KIM LUDBROOK