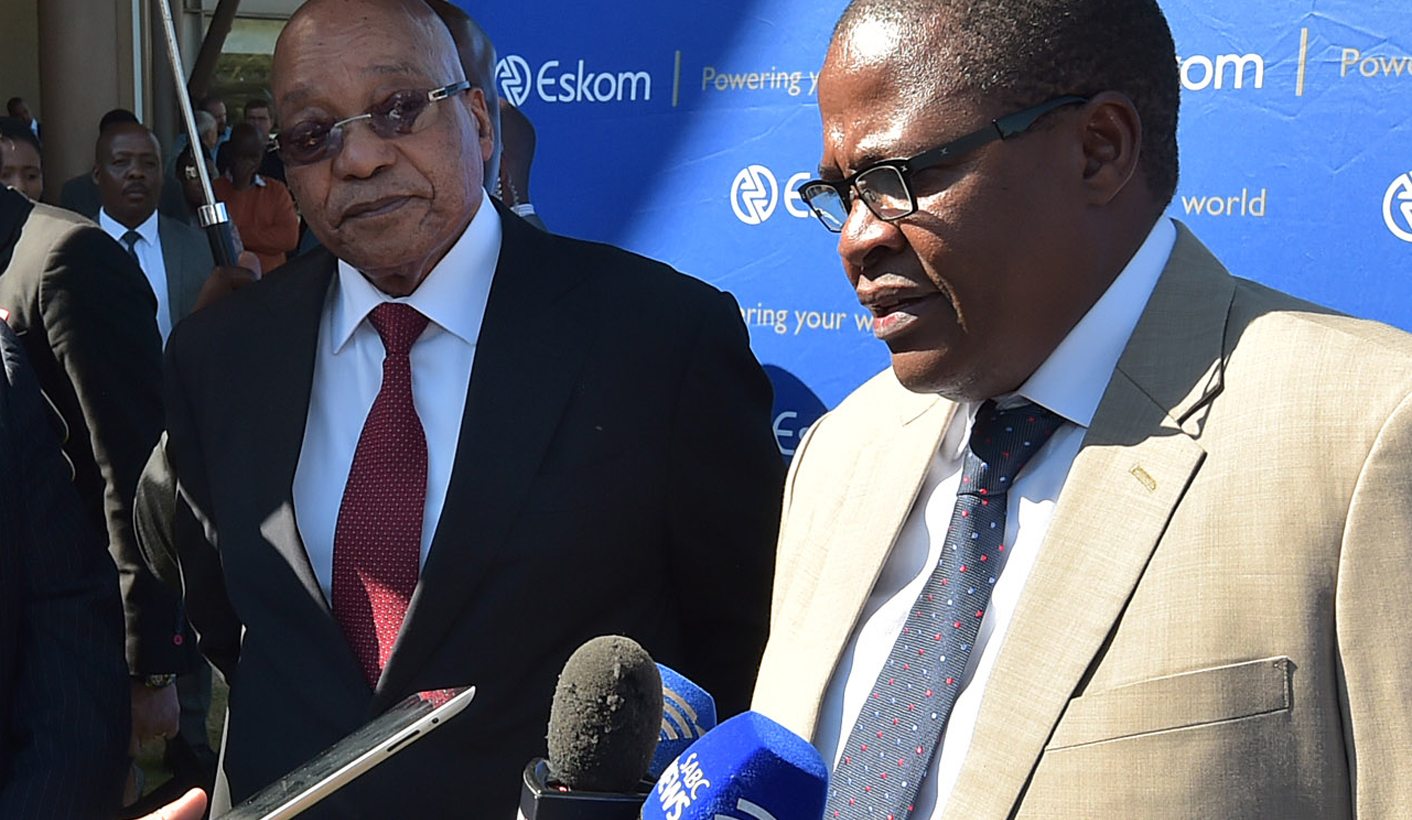 In the firmest signal yet that ex-Eskom chief Brian Molefe is headed for a finance portfolio, the ANC in Parliament has moved one of its MPs from the finance committee. While Makhosi Khoza has been discharged and moved to the public service and administration committee, no one has been appointed in her stead, according to the Announcements, Tablings and Committee Reports (ATC), or Parliament’s work record, published on Monday. This leaves a finance committee vacancy ready to be filled by, for example, Molefe, as for the second year in a row Wednesday’s Budget is overshadowed by political machinations. By MARIANNE MERTEN.

Budget 2016 was overshadowed by 27 questions the Hawks sent to Finance Minister Pravin Gordhan as part of their criminal investigation into seven-year-old matters related to his stint as South African Revenue Service (SARS) boss from 1999 to 2009.

The charges, related to approving the early retirement but then re-hiring of SARS senior official Ivan Pillay, were dropped at the end of October 2017. This followed the surfacing of a SARS legal opinion that there were no legal implications in granting the early retirement that came with a R1.1-million payout, which the Hawks had failed to detect during their probe that had been widely slated for being politically driven.

Budget 2017 is overshadowed by increased speculation of changes in the finance ministry amid stepped-up vocal criticism styling National Treasury as a stumbling block to transformation. It is in this context that Molefe’s move to Parliament has sharply raised eyebrows – as does the timing of the creating of an ANC vacancy on the parliamentary finance committee, even if shifting MPs between committees itself is not unusual.

That Molefe is headed to Parliament was confirmed by the national legislature on Friday, the same date of the ATC that was published on Monday. How this has come about remains shrouded in controversy: from contradictory statements by various ANC groupings in North West to questions as to how exactly the provincial elected public candidates list was depleted and why it was not supplemented as per Schedule 1A of the Electoral Act and published in the Government Gazette.

It is crucial that Molefe becomes an MP. That’s because President Jacob Zuma already has filled the two spots in his executive legally permitted to be held by non-MPs – Water and Sanitation Minister Nomvula Mokonyane and Police Minister Nkosinathi Nhleko.

Whether any of this will happen remains speculation until Zuma announces a Cabinet reshuffle, as ministers and their deputies serve at his pleasure. But Molefe’s move happens in the political heat brought on Gordhan and National Treasury over the past year, and amid ANC factional politicking in the run-up to its December national conference.

Molefe resigned in November 2016 from the power utility after the public protector’s State of Capture report directly associated him with the politically connected Gupta family. To be precise, the report details 19 phone calls between August and November 2015 to the Gupta family’s Saxonwold, Johannesburg, home plus another 58 phone calls to a Gupta business associate from August 2015 to March 2016. At the time, the Guptas’ Tegeta Exploration and Resources company was acquiring Optimum coal mine, a deal clinched through a R600-million pre-payment from Eskom for future coal deliveries to the power utility.

Molefe may well be sworn in in time to watch Gordhan deliver his Budget 2017 from 14:00 on Wednesday.

That Gordhan has a difficult Budget to deliver is a given. There is a R28-billion shortfall due to declining tax collection and other revenue underperformance. This comes as irregular expenditure has ballooned to R46.3-billion in the 2015/16 financial year, according to the auditor-general. And fruitless and wasteful expenditure added another R1.37-billion that year.

Economic growth for 2017 is expected at 1.1%, according to the World Bank, and around the same by domestic authorities such as the South African Reserve Bank. This growth rate falls well short of the 5% needed in the national blueprint, the National Development Plan (NDP), to reduce poverty and inequality by 2030. A few thousand jobs may have been created recently, but the long-term trend is a stubbornly high rate of joblessness – just over 36.3% in the third quarter of 2016 on the expanded definition including those too discouraged to even try.

In a recent parliamentary presentation, the World Bank stressed the need for private investment to boost economic growth – and targeted incentives in sectors where job creation happens, such as manufacturing, services and agriculture – because private consumption by households is simply too constrained in the current fragile economic climate.

Food prices are up, and so is the price of just about everything else, from medical insurance and transport to electricity. One of government’s former successes – the payment of social security grants to 17-million poor South Africans – is under a cloud from as soon as April 1 as the controversy over the South African Social Security Agency (Sassa) service providers remains unresolved.

A personal tax hike is widely held to be on the cards, again. If previous years are anything to go by, sin taxes will go up as will the fuel levy, which in turn is set to lead to a petrol price hike independent of exchange rates and the oil price. Government is reluctant to increase Value Added Tax (VAT) due to the impact on the poor.

There are competing demands, not only from within a fractured ANC now pledging radical socio-economic transformation in 2017, a broader, tense political landscape, but also within Cabinet, where the political pressure to deliver is on against a background of programmes that have struggled to get off the ground over the past few years.

This is the context to recent remarks critical of National Treasury as an obstacle to transformation from Mokonyane, according to the Mail & Guardian, which elsewhere also reported on Small Business Development Minister Lindiwe Zulu complaining about insufficient funding. There are also differences on how to resolve the Sassa saga between National Treasury and Social Development Minister Bathabile Dlamini, who is also president of the ANC Women’s League, which publicly has endorsed former African Union commission chairperson Nkosazana Dlamini-Zuma for ANC president.

It’s clearly a political game, one in which Molefe’s role has yet to emerge fully, but also a sign of the extent to which political interests have infiltrated matters of state and governance.

Ministers, like provinces, have been part of the long-established budgeting process that starts in May every year. That’s when national and provincial departments submit their wish lists based on overall government programmes and priorities. A Cabinet Budget committee, not just National Treasury, is part of the process, as are several technical committees checking and verifying the numbers. Between August and September every year detailed plans, alongside performance targets, are submitted to National Treasury for finalisation into what becomes a detailed set of Budget documents released on the last Wednesday of February, every year. But even by mid to late December, government departments know how much they will get, and why.

Outside this government process, Gordhan faces other Budget demands. On Monday labour federation Cosatu said it wanted more money to go to addressing unemployment, deepening poverty and growing inequality. “Cosatu expects to hear about tax increases only for those who can afford them; the rich and not the working and middle classes. The current socio-economic situation in the country means that we should not have any increase on VAT or income tax for the lower and middle-income earners,” it added in a statement.

Meanwhile, the DA wants the finance minister to sell off assets not directly related to government, and to privatise. Targeting state-owned entities, in line with the presidential review committee on state-owned entities, DA MP Alf Lees on Monday said such action could raise an estimated R1.1-trillion. Further money could be gained by shedding “dead capital” like the 13,043 underused land parcels or 1,939 unused buildings in the public works departmental portfolio. And DA MP David Maynier highlighted areas of cost-cutting, including the R1.3-billion VIP protection services budget and the public service, which is expected to cost R549.4-billion in the 2017/18 financial year.

The wish lists are long. But the purse strings are tight. As the political chess game continues to unfold move by move, including that of Molefe, the finance minister faces a Sisyphean task. DM