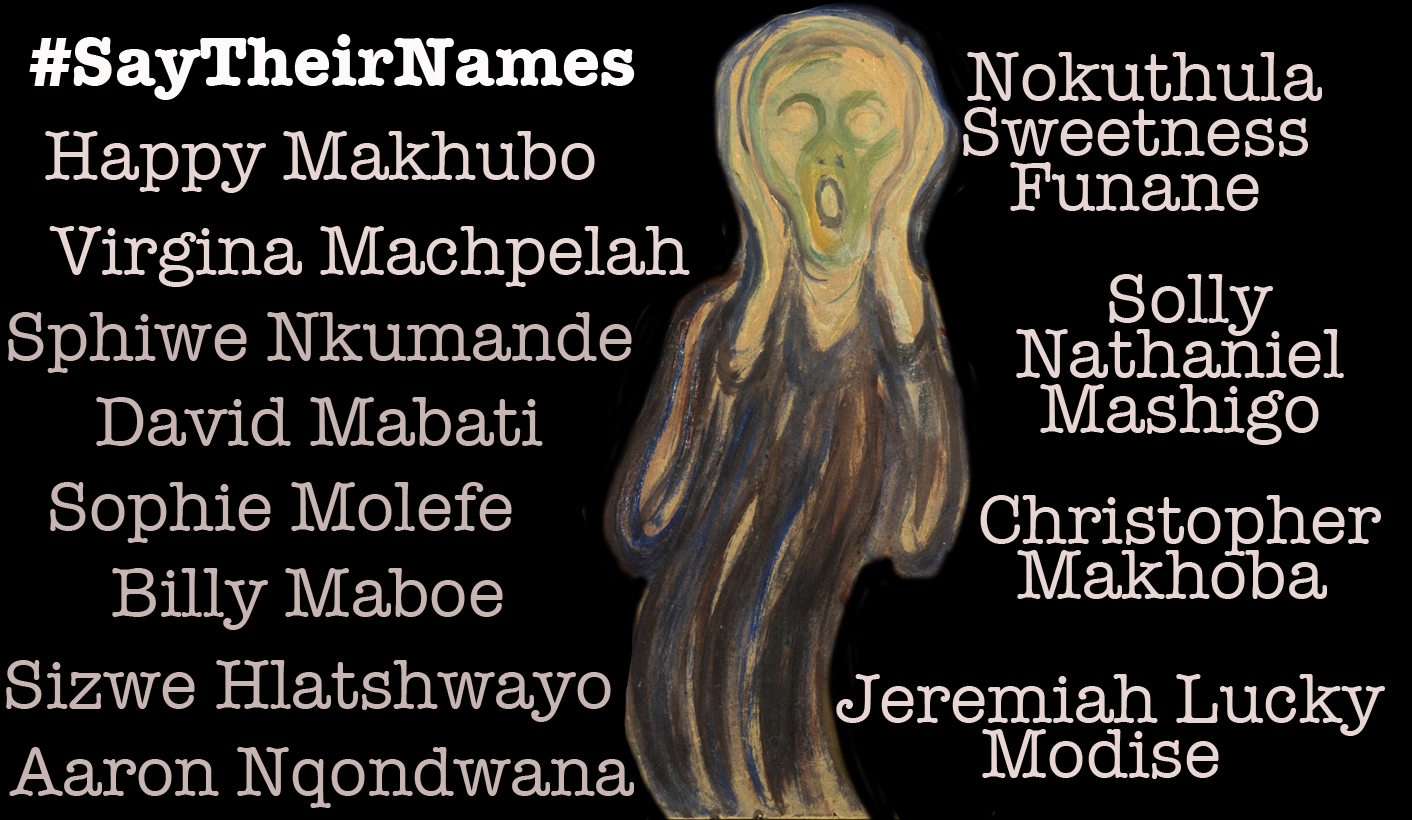 It has been 28 days, and still nobody knows how we got here. Not the Minister, not the Premier. Apparently nobody knows how more than 100 people lost their lives while they were in the care of people who took the Hippocratic oath and the Nightingale pledge. While we go back and forth to try to figure that out, we must never forget that these people were not just a number. They lived full lives, they had families, they belonged and they were loved. Below are a few words from their family members who got an opportunity to talk about their final experiences with their loved ones. By NOMATTER NDEBELE for SECTION27.

“My father was killed in Thembisa during the ANC and Inkatha wars, his body was left outside his mother’s gate. And now my aunt has died. My grandmother’s words were, ‘I have lost two children to this ANC, and not once have they come to account.’ In a meeting with the department, an official said to me, ‘Did you think your aunt was never going to die?’’’ – Brenda, niece

“Minister Motsoaledi, I have been waiting to meet you, to look you in the eyes and tell you this. I found my brother’s body, in a butchery, without eyes. His body was stacked between the corpses of other men and women. My brother, who was mentally unwell for 24 years, ended up in a butchery that I knew from my childhood. We went to see my brother every day. Minister, you are black like us. What if it was your brother or your sister, how would you feel?” – Phumzile Mirriam Motsegwa, sister

“Someone came to the house to ask me if this was where Christopher lived, and the next day, we got a phone call saying Christopher died. Stop comparing the deaths of our loved ones to Marikana, our loved ones were not armed when they were killed, they were not a threat, they fought with no one. The man who spoke before me is better off, at least he saw where his son was lying. I found my brother’s body at the gate of an old disused hall. Who will I sing to now? Minister, Premier, you owe us nothing. We don’t want your platinum, diamonds or silver. We just want answers.” – Elizabeth Phangela, sister

“I just wanted to bring Jeremiah home for his 50th birthday. Mr Motsoaledi, do you know where I went to fetch my son’s body? My God! All I wanted was my son’s body, and I drove so far just to find him. – Kgomotjo Modise, mother

“My brother was also bleeding profusely when I was told that he had died. I asked the undertaker, ‘he is bleeding so much, what are we going to do?’” – Anonymous, brother

“My sister did everything right, she didn’t smoke, she didn’t drink and she would give of her last to someone who needed it more, and you would expect someone like that to die with dignity – not in the way she did. We will fight because there is no ways that black and poor people are going to be treated this way. Then again, in South Africa you have rights, but really you don’t. You get told you have this law, this law and this law to protect you, but really you don’t. Dr (Makgabo) Manamela must never walk in the halls of a hospital. She must be struck off the roll and it must be said next to her name that she must never be in a position to care for people.” – Christine Nxumalo, sister

“My grandmother died before she found her son. When we saw him they said that he had been dead for two weeks. We later found that he had died in July and we were only informed in September. When we found him his body was burnt all the way down the front. His body was so badly decomposed, the flesh was falling off his bones. His death certificate lists the cause of death as: ‘still investigating’.” – Anonymous, niece

“When I went to try and open a case about my uncle’s cause of death, the police said to me, ‘We are having a farewell for one of our colleagues, come back tomorrow or on Monday’. The NGOs are calling me now asking for his death certificate. I want to know from you, Minister and Premier, what do I do?” – Sizo Mabati, nephew

“My mother begged for help, she asked that Sophie be taken to a place where she would be safe because we were unable to care for her, and they told us they would help us – we waited for that help until Sophie died.” – Dora Molefe, sister

“On my birthday the phone rang and my son spoke. He said, ‘Pappa, where are you, when are you going to fetch me, I am in Haras… Haraskraal.’ And then a voice in the background said ‘Hamanskraal’ and the call was dropped. When Billy came out of the kitchen, he was trembling. I turned to my nephew and I said, ‘I see death here’. When I found Billy, he was stinking, he was filthy, he was in the same clothes that he left Life Esidimeni in and he was so hungry. I had travelled to the hospital with the intention to anoint Billy and give him the holy sacrament. I never got to give him that service, because my son had died on that very day at 2.30pm. – Reverend Maboe, father

“I have loved my son more than any ordinary family could have. My son was lying in the middle drawer of the mortuary, bleeding profusely from the mouth, with a ball of cotton wool in his mouth. If you can phone me, Mr Makhura, Mr Motsoaledi, and say ‘This is what killed your son’, I think I may be able to rest. I would like to be excused, so that I can go home and receive my son’s body, so that I can bury him tomorrow.” – Christopher Nqondwana, father

“How do I heal? Tell me. When my son died you brought me a food parcel. What will you do with a food parcel when you have lost your loved ones? We didn’t send our children to Esidimeni because we didn’t love them. No, we sent them because we did not have the means to look after them. Sizwe spent years at Waverly, and not once did I ever hear that he was unwell. He was removed from Waverly, and in six months he had to be hospitalised and he died the very next day.” – Anonymous, mother DM