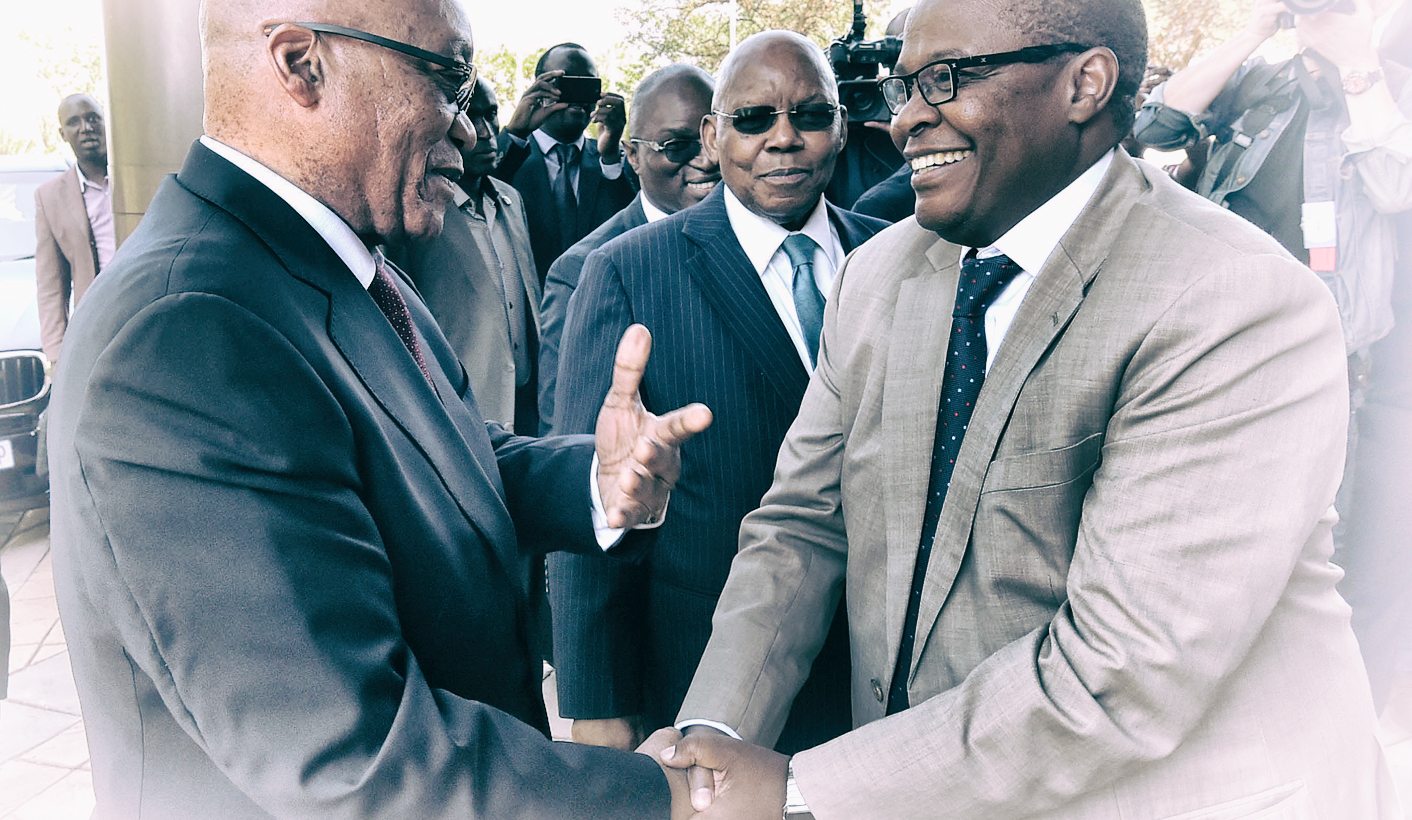 The 1979 British satire Monty Python’s Life of Brian was the story of a young Jewish man born on the same day and in the stable next door to Jesus Christ. Later in life, he gets mistaken for the messiah and his mother’s house is mobbed. Brian’s mother exclaims: “There’s no messiah in here. There’s a mess all right, but no messiah.” Like his namesake in the parody, Brian Molefe is seen as the “chosen one” by his political backers. But Molefe’s entry into the Cabinet would only add to the mess, and President Jacob Zuma will be gambling with his own future if he dares to dabble with the finance ministry. By RANJENI MUNUSAMY.

Mosebenzi Zwane became a member of Cabinet without much fanfare in September 2015. Hardly anyone knew who he was, though there were mutterings at the time about him being close to the Gupta family. Ngoako Ramatlhodi was quietly shifted out of the key Mineral Resources portfolio to Public Service and Administration, the post vacated when Collins Chabane died some months earlier. The Cabinet reshuffle was therefore not unexpected as the vacancy needed to be filled.

Zwane used his position unashamedly to do the Guptas’ bidding, facilitating the sale of Glencore’s Optimum coal mine to the family’s Tegeta Exploration and Resources. He has travelled to Dubai and India to take instructions from the family, and like a well-trained toady, did exactly as he was told.

Des van Rooyen’s entry into the Cabinet was an event of nuclear proportions by comparison. The Presidency announced that Van Rooyen would replace Nhlanhla Nene as Finance Minister on the night of December 9, 2015, sending massive shock waves across the country. In the financial pandemonium that followed, people tried to establish who exactly Van Rooyen was. When it became clear that he too was a political nobody appointed at the Guptas’ behest, the threat to the National Treasury and the country became clear. Zuma came under enormous pressure from inside the ANC and the financial sector. Within four days, Van Rooyen made way for Pravin Gordhan.

That was the last change Zuma made to his Cabinet. He was stung by the backlash and has spoken several times about how he was strong-armed into shifting out the “most qualified” finance minister ever appointed. In those four days, Zuma came to understand that while he maintains the constitutional powers to hire and fire Cabinet ministers, the ANC and those who hold economic power in the country can veto his appointments.

From February last year, after Gordhan received 27 questions as part of the Hawks’ flimsy investigation against him, the buzz was that Brian Molefe, then Eskom chief executive officer, was earmarked to replace him. There were also rumours that a new MP from KwaZulu-Natal, businessman Sfiso Buthelezi, had been deployed by the Gupta-aligned “premier league” faction as a candidate for the finance ministry.

In March last year, Deputy Finance Minister Mcebisi Jonas dropped a bombshell, revealing that the Guptas had offered him the position of finance minister before Nene was fired. All this did was to also put Jonas in the firing line. Zuma refused to answer questions about Jonas’s revelations, and the Guptas, even in recent court papers, deny this ever happened.

The National Treasury has thus been in peril for a year, with the axe hanging over both the finance minister and deputy minister.

In an interview with EWN in May, Molefe said it was unfair to ask him if he would accept the position of finance minister as he had not received, and may not receive, such an offer.

“And if he (Zuma) does, I’d rather he hears the response from me and not from Eyewitness News,” Molefe said. He also said he believed Gordhan was doing a good job and should stay in his position.

But the last few months have changed Molefe’s fortunes – and possibly the beliefs he held back then.

The “State of Capture” report by former Public Protector Thuli Madonsela showed that Molefe exchanged 58 phone calls with members of the Gupta family at the time when Tegeta was acquiring the Optimum coal mine, an Eskom supplier. The Guptas were aided in financing the Optimum deal through a pre-payment of more than R600-million that Eskom had approved for coal it would get from Tegeta.

Molefe was left heavily compromised, and struggled to explain what he was doing on 19 occasions in the Saxonwold area between August 5 and November 17, 2015. In a messy, cringeworthy media briefing at the Eskom headquarters, during which Molefe broke down in tears, he came up with a rather extraordinary reason for his regular presence in Saxonwold.

A few days later, Molefe resigned from Eskom “in the interests of good corporate governance”.

Now Molefe is set for a major political comeback with Parliament announcing on Friday that he is to be sworn in as an MP as he would be filling in a vacancy on the North West list of ANC members.

Reports in the Sunday press say that there was no vacancy but that ANC MP Abram Mudau was pushed to resign from Parliament. The North West ANC claimed they nominated Molefe as a branch member but City Press reported that leaders of the Hartbeespoort branch deny he is on their books. It is clear that the process is being cooked to get Molefe sworn in as an MP speedily.

And there can only be one reason for that.

The Cabinet reshuffle has been coming for a long time. Lists have been circulating, Zuma’s detractors have been preparing to be fired, and former African Union (AU) Commission chairperson and presidential contender Nkosazana Dlamini-Zuma is poised to re-enter the South African government. There is one vacancy – the post of Deputy Trade and Industry Minister after Mzwandile Masina became mayor of Ekurhuleni.

But that post is too low-flying for the likes of Molefe and Dlamini-Zuma. It is apparent that a major structuring of the executive is on the cards. But the big question is whether Zuma will dare to touch the finance portfolio.

If Zuma removes Gordhan, even after the 2017 Budget is done and dusted, he will face a major backlash from within the ANC national executive committee (NEC). It is not that Gordhan has special protection; it is that the situation is so precarious in the ANC that a gamble with the finance ministry will send the party into a tailspin.

While Gordhan is coming under heavy fire from ministers and NEC members such as Nomvula Mokonyane and Bathabile Dlamini for the Treasury’s strict financial controls, he is backed by people like Deputy President Cyril Ramaphosa, Gwede Mantashe, Zweli Mkhize and Jackson Mthembu. Zuma could therefore have to face off with other seniors in the party again, as was the case when Nene was fired – but this time it would be post the attempt in the NEC to remove him as president.

Zuma would also be aware of how the ANC, business leaders and civil society rallied around Gordhan when the National Prosecuting Authority tried to charge him in November. With ANC stalwarts and the NEC already breathing down his neck, the last thing Zuma would want is the entire South African society – minus the Guptas and the premier league – storming the Bastille.

If Zuma leaves Gordhan in his post and removes Jonas, there is a possibility that Gordhan will quit anyway. Gordhan is already forced to put up with Tom Moyane, the commissioner of the South African Revenue Services, when he has made it clear he does not trust him. If he has Molefe or any other Gupta deployee thrust into his ministry, chances are he might opt out – which will prompt a crisis for Zuma anyway.

There are several ministers who have proved to be inept and deserve to be fired – among them Faith Muthambi, Zwane, Dlamini, Mokonyane and Tina Joemat-Pettersson. But it is unlikely that Zuma will take performance and capability into consideration. This reshuffle is about lining up who would be useful to him, his faction and his friends in his last two years in power.

The Energy and Public Enterprises portfolios might not be the National Treasury, but they are big prizes. Molefe could be useful to his handlers in these posts. But life will not be easy for Molefe in any job. He has already been compromised and exposed as the Guptas’ henchman. Next to Zuma, he is likely to become the most tormented figure in South African politics.

Molefe has shown himself to be weak when he comes under attack. Opposition parties and the media are likely to hound him and track his every move to expose the Gupta agenda. If Madonsela made Molefe cry, he had better be armed with a big box of tissues when he has to come up against Julius Malema.

Dlamini-Zuma’s appointment might be less contentious. She has served in Cabinet from the Mandela administration and has only been out of government during her spell at the AU. She needs the Cabinet portfolio to travel around the country to campaign and raise her profile. While this is obvious exploitation of government resources, there is unlikely to be opposition from the ANC to her re-entry into Cabinet.

Zuma’s dilemma lies with Molefe. He is more baggage than he is worth but with both men being dictated to by the Guptas, Zuma does not appear to have much choice but to appoint him.

Zuma cannot be oblivious to the Mexican standoff that will ensue if he prompts another crisis over the finance ministry. He would be putting his own future at risk if he dares the ANC NEC to reopen the discussion about his fitness to hold office. And he would definitely want to avoid an implosion as a result of Ramaphosa and others quitting en masse.

Is Brian Molefe really worth all this trouble? We will soon find out. DM