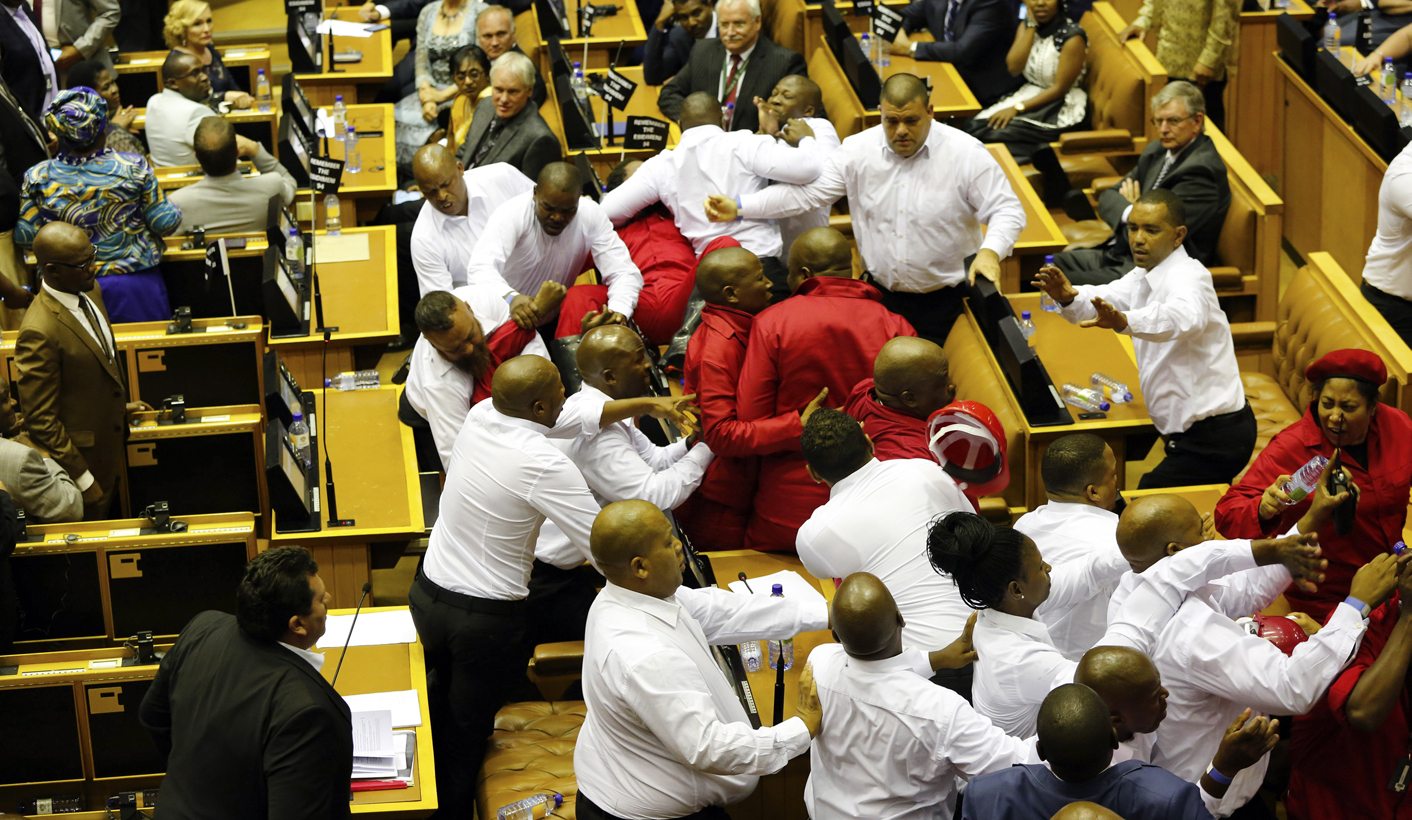 Briefings of “potential third-party endorsers to… influence people”, standby media statements, dealing with “questions from hell” and closed group communication “that is encrypted for protection of information shared”. These measures were part of Parliament’s crisis communication plan for last week’s debate on the State of the Nation Address (SONA). Headed “Debate on SONA 2017 – Crisis Communication Plan”, the strategy is based on a curious mix of outdated, and confused, intelligence. The plan comes as Parliament finds itself on the back foot in the communications war following unprecedented SONA 2017 security measures and yet more mayhem in the House. By MARIANNE MERTEN.

The Debate on SONA 2017 – Crisis Communication Plan document, seen by Daily Maverick, sketches three scenarios, each of them phrased in the best of bureaucratic claptrap infused with securocrat-speak.

Scenario 1 talks of “potentially disruptive conduct by some Members of Parliament inside, evictions, resistance and violence” and a possible adjournment of the parliamentary sitting. Yet the EFF, whose members were again violently ejected from the House during President Jacob Zuma’s address, announced their boycott of the debate on February 10, the day after the State of the Nation Address.

Scenario 2 centres on “violence outside of the parliamentary precinct perpetrated by organisations or individuals, and a possible clash with police resulting in minor or major injuries and/or damage to property”. No information is presented on whether the council actually had approved any protests, or which groups were expected to arrive without permission.

Scenario 3 talks of “potential strike/industrial action by staff responsible for providing critical support services to Parliament on the day of the SONA”. This was slipped in as a consideration for the debate that unfolded four days afterwards. And it comes almost two weeks after an official union decision not to interrupt the debate, or SONA for that matter, which anyone with an ear to the parliamentary grapevine would have picked up.

Some aspects of the plan kicked into gear a day before the start of the parliamentary SONA debate. A “position paper” would be developed as well as a “draft holding statement”, by February 13, with the injunction that “all statements to be prior approved by Secretary to Parliament (Gengezi Mgidlana)”.

The “crisis communication” steps included Parliament’s communications unit co-operating not only with colleagues from Government Communications and Information Systems (GCIS) officials, but also security, in watching for potential crises.

“Staff deployed at strategic positions in and around the parliamentary precinct in order to identify irregularities and to timeously share information with Ops (operations) Centre,” said the plan.

Scratched from the plan was the establishment of the “ops centre”, supposed to be headed by Parliament’s media management and equipped with secure wi-fi. Instead, Mgidlana would “serve as the nodal point of co-ordination of institutional management of crises” and as the “interphase” between presiding officers, political office-bearers and the administration. The crisis communication plan established a “generic crisis management committee”, accountable to Mgidlana, to convene meetings when required.

The plan outlines the need for briefing notes, fact sheets, dealing with “questions from hell” and key messages and a “clear storyline to influence the narrative and share issues of tonality to ensure that message is well received by media”.

It outlined that the presiding officers or Mgidlana, if and when required, would “arrange stakeholder briefings, including potential third-party endorsers, who would carry forward the spread of the work and influence people”.

Word in the parliamentary corridors is that the State Security Agency (SSA) – at least two of its operatives have offices at Parliament – played a key role in drafting this crisis communication plan.

“SSA did not draft any crisis communication plan for Parliament,” he said, referring the matter to the national legislature’s communications structures.

“There was no involvement of the SSA in the parliamentary communications planning of either SONA or the SONA debate,” said Parliament’s spokesperson Moloto Mothapo.

Parliament actualised at least some of the crisis communication plan to try to gain the communication upper hand following the forced eviction of the EFF, and police in body armour, riot shields and helmets moving in formation in the parliamentary precinct.

It issued two late-night statements after SONA2107: one highlighting how those who evicted the EFF were “brutally assaulted when they were merely doing their work” and the other on the “security breach” of a powdery substance scattered in the public gallery. A week later National Assembly Speaker Baleka Mbete, who is also ANC national chairperson, issued a statement in which she “committed to avail herself to meet with key stakeholders so as to engage them and address the matter” while also announcing a public education campaign.

In the week between SONA2017 and the end of the parliamentary SONA debate, the ANC in Parliament also laid the blame for the mayhem at the EFF and DA. In a clear dig at the EFF, although it remained unnamed, President Jacob Zuma in his closing reply said:

“… some MPs have decided to treat this august House like something worse than a beer hall”.

The behaviour of the ANC parliamentary benches, captured shouting “sell-out”, racist” and even “fuck you”, was simply noted and put on the agenda for discussion at an upcoming ANC parliamentary caucus. Only North West Premier Supra Mahumapelo wrote to the presiding officers to apologise for his scuffle with a DA MP that had been caught on camera. His apology was read out in the House in his absence on Thursday.

The matter of military police armed with R4 rifles in the parliamentary precinct has been referred to the defence ministry by Parliament, days after the ANC parliamentary caucus said it would write “for clarity” to the presiding officers.

It’s unclear whether crisis communication will become a staple of parliamentary organisation. But efforts to change a narrative towards a rosier view of the national legislature as a House of debate, decorum and dignity will remain an uphill battle until a political – and not a security- or crisis-focused – solution is found. DM