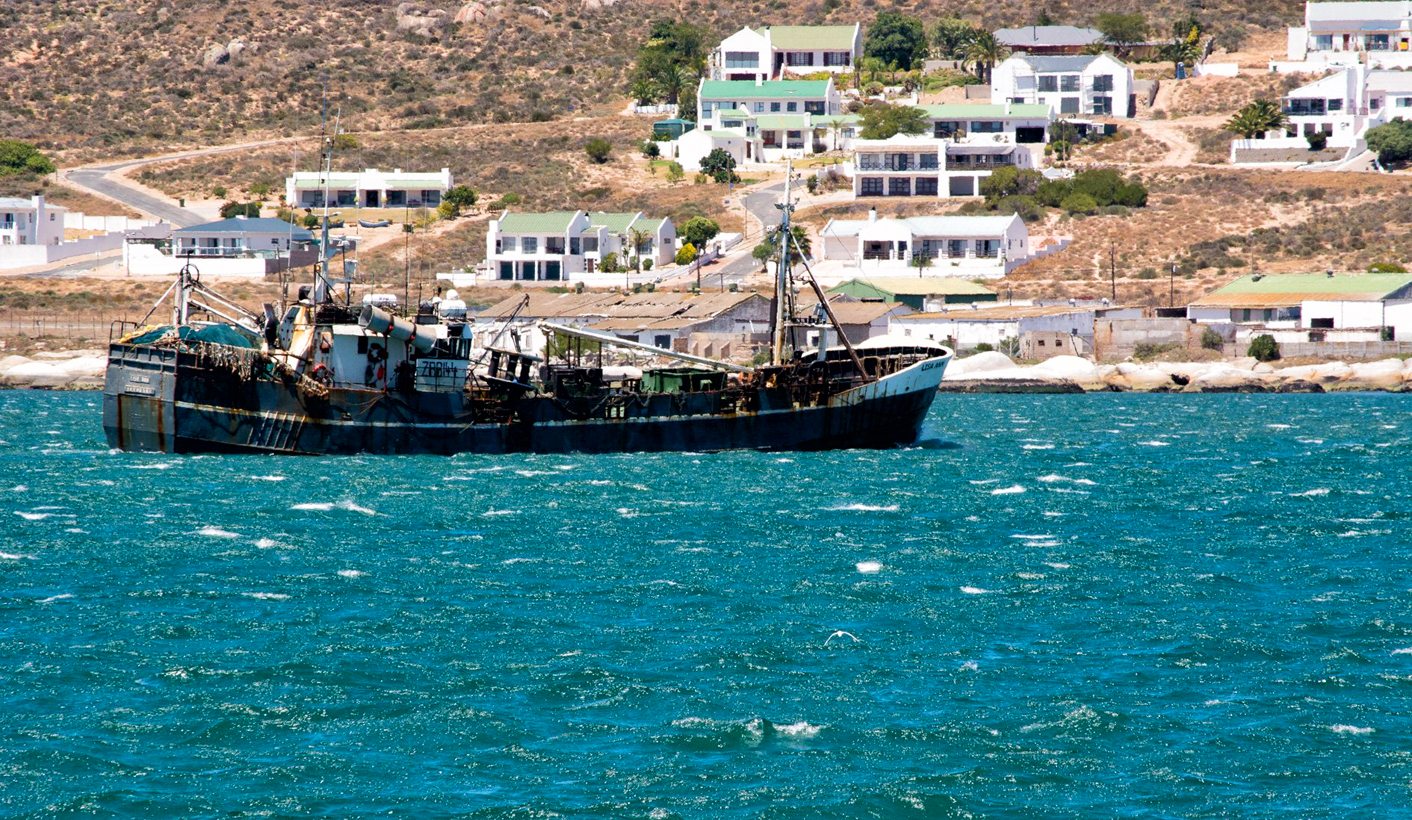 Agriculture, Forestry and Fisheries Minister Senzeni Zokwana has been accused of reneging on a recovery plan for the depleted stocks of West Coast rock lobster. By Craig Dodds for GROUNDUP.

The view from the Sandy Point harbour wall towards the shore at St Helena Bay tells the little fishing town’s story in a glance.

A scattering of derelict buildings brackets the harbour on either side. Their vacant window frames are testimony to an age that is all but gone, when the ocean sustained generations of fisherfolk.

Today there is only a desultory coming and going of vessels in search of heavily depleted fish stocks on the West Coast.

Across the road from the harbour, holiday homes have sprouted on the slopes above the town – a phenomenon that is replicated down the coast in villages like Paternoster and Langebaan, where quaint cottages that once belonged to fishing families now host visitors from around the world in a thriving tourist industry.

For better or worse, change is rippling up the coast as the disruption of the marine ecosystem spills over on dry land.

But a collapse in the population of the iconic West Coast rock lobster, whose tender flesh draws foreigners in droves during the season, may finally sever the area’s ties to its fishing past, driving its people into new forms of employment and leaving only a few commercial outfits behind.

The Southern African Sustainable Seafood Initiative (SASSI) has listed the species as endangered and called for the fishery to be closed after Agriculture, Forestry and Fisheries Minister Senzeni Zokwana reneged on a recovery plan for kreef that had been thrashed out with scientists in his department and stakeholders in the fishery by announcing an unchanged total allowable catch for the 2016/17 season.

The situation is so dire that even small-scale and commercial fishers have come out in support of SASSI, with a group of big suppliers under the aegis of the Responsible Fisheries Alliance warning last week that unless the government took heed of scientific evidence and significantly reduced the total allowable catch, the sustainability of the fishery would be under threat.

The alliance, which includes the Oceana Group, Viking, Sea Harvest, I&J and Pioneer, said steps in foreign markets such as the US – South Africa’s biggest customer for frozen lobster – to ban imports of seafood from potentially illicit sources could damage trade in the sector.

The lobster fishery was one of the most valuable, with an annual turnover of R530-million, supporting 4,100 direct jobs and providing livelihoods and food security for many more in the small-scale sector, the alliance said.

SASSI estimates from an analysis of catch data and extrapolations of poaching levels, among others, that the kreef population now stands at just 2% of historical levels, warning that it could vanish within five years.

This view is supported by anecdotal evidence.

Outside the Visko Seeprodukte building in the Sandy Point Harbour, Heinrich Sias, Zander Papier, Bryan Adams, Warren Fortuin and Connery Januarie while away their downtime by sprucing up the company’s Number 7 vessel.

They struggle to find lobster these days, they say, sometimes forcing them to remain at sea for days at a time before they have caught enough to justify the trip. They agree in unison that the cause of the problem is rampant poaching. But they blame the fisheries department’s glacial processes in issuing permits — and inadequate quotas for those who do get a licence — for the proliferation of poaching. As a result, some fishers double as poachers by night, they say.

Johannes Erasmus, a fisherman for more than 50 years, has retired now, but can still recall the days when he could bring in 400kg of lobster from one outing. He says this has changed dramatically in the past five years and now the boats seldom catch their fill in one day. His wife, Lenie, says the children of St Helena today are unlikely to become fishers, as they drift towards the city and better job prospects. Just one of their four sons has followed in his father’s footsteps, but Erasmus doesn’t mourn the passing of the old ways. “Being a fisherman is not a good life. Today there’s plenty and tomorrow there’s nothing,” he says.

A little down the coast, the restaurants of Paternoster have taken lobster off the menu at the height of the tourist season following SASSI’s call, and are paying the price. Behind the till at the Voorstrandt eatery, within walking distance for a kreef from the shoreline, Tanzi-Anne Stander says foreign visitors especially are furious when they discover there is no lobster to be had. “If somebody comes to the Western Cape they will spend one or two days in Paternoster to experience the crayfish, but now, why bother? Every bit of seafood we sell they can get in Cape Town,” she says.

The effect of would-be diners walking out because of the lack of kreef has made about a 15% dent in her turnover, she estimates. She is angry that illegally caught lobster is openly traded on the streets of Paternoster, undermining the efforts of the restaurants to protect the stocks. But, if people can’t catch and sell kreef, they have no income, she adds, and some will turn to petty crime to survive. The only real solution would be to halt or drastically curtail the export business, where most of the commercially harvested lobster is destined, Stander says.

Pavitray Pillay, manager of the SASSI programme for WWF South Africa, says the minister’s decision to reject the recovery plan and implement an unchanged total allowable catch came like a bolt from the blue.

The SASSI team and Department of Agriculture, Forestry and Fisheries (DAFF) scientists had worked together on the data and the plan, which included reducing the total allowable catch, issuing long-term fishing rights, ensuring lobster could be traced to its source to curtail poaching and shortening the season, among others.

“We were ready to implement this plan and SASSI was happy, we’d done a lot of legwork, and then all of a sudden the minister announced an unchanged total allowable catch, unchanged fishing effort, no real implementation around traceability, nothing to do with long-term fishing rights, and he announced it at the end of October, beginning November, roughly as the recreational season was opening, with no consultation with his own scientists, no consultation with outside stakeholders, no consultation with the fishing community, literally just, boom,” Pillay says. It’s unusual for small-scale fishers to back an environmental NGO, seemingly against their own interests, in a proposal to suspend fishing, she adds. “They said, no, we know the problem, we see the problem.”

Pedro Garcia, a fisherman and chairman of the SA United Fishers Front, says it’s “undeniable” that the lobster population has drastically declined over the past three years. “We used to come in with anything from 150kg to 200kg a day,” he says. “Now when we go out, we are lucky if we come in with 50kg.”

This has set off a destructive spiral in which boat operators struggle to recover the costs of going to sea and turn to poaching as a means of supplementing their income. They “tail” their catch – breaking off the creature’s tail – to make it easier to conceal, but the practice means they are wiping out immature lobster that would have formed the basis of the following year’s catch.

The result is that the catch declines every year, in turn driving fishers to more desperate efforts. “From a compassionate point of view, you know these guys are out there, you know they need to meet their operational expenses,” Garcia says. “This is the problem with the small-scale (fishers), we criminalise our people continually because they are soft targets, but we’re not realising the huge socio-economic impact if they don’t get sufficient resources to harvest.”

Support for the suspension of the fishery, which the front made on condition that fishers were compensated in full for the catch they would forego, has not been universal. In fact, says Garcia, the majority of his members don’t support the call and some communities have been “up in arms”, accusing him of taking the decision unilaterally. But it was fully canvassed via the front’s WhatsApp chat groups, he says. Many fishers opposed to the suspension are also poachers who would lose if no lobster could be sold, Garcia adds.

Pillay says while SASSI understands the impact on people’s livelihoods of a total shutdown, this is the only way to halt the poaching and allow kreef stocks to recover. Because the department has done nothing about ensuring traceability of the sold product, illegal stocks can enter the formal value chain undetected. If no kreef was allowed to be sold, this would end.

“The commercials agree with us, because I think they’re also noticing that we have no handle on the traceability issue, how it’s getting into the market,” Pillay says. “It’s a tough one to police, I’ll give DAFF that, because it’s so easily exploitable. You don’t need heavy equipment, you don’t even need a boat. And it’s an extensive coastline where you can catch the species, you can catch it at night or (during) the day.

“At the same time, we don’t have enough capacity, DAFF hasn’t done anything about the capacity issue, and it’s not like there aren’t people in this country who need employment. That’s something DAFF really has to get right because it’s not just for rock lobster, it’s probably why abalone went the way it did. Otherwise I don’t know where we’re going to go,” Pillay says.

Asked why the recovery plan that had been agreed to had not been implemented, Zokwana’s spokeswoman, Bomikazi Molapo, said that setting total allowable catches must balance scientific requirements with the “broader socio-economic obligations faced by fishers”.

Molapo said SASSI’s decision to red-list lobster and call for the suspension of the fishery was “extremely unfortunate” and would have serious consequences for small-scale fishing communities, while leaving large commercial operators unaffected. The decision had been taken without consulting the department, she said.

Molapo said the decline in lobster biomass was not due to legitimate harvesting by rights holders, but was because of poaching and illegal trade. The total allowable catch was set at sustainable levels. “The department believes that instead of prejudicing and punishing legal operators while poachers continue to take lobster with little consequence, our focus must be on eradicating illegal fishing,” Molapo said. Cutting the catch by 34%, as proposed by WWF, would have “catastrophic consequences” for communities, without helping lobster recovery.

She said the 2007 suspension of the abalone fishery had shown that “suspension for the sake of suspension does not work. In 2008, while the abalone fishery was suspended, we recorded some of the highest levels of poaching ever. Conversely, the department’s concerted efforts at protecting line fish species which were declared in 2000 to be in a state of environmental crisis – the equivalent of the current state of lobsters – by focusing on effective fisheries management, close collaboration with fishers and their representative bodies and enforcement of fishery management and recovery rules has yielded substantial recovery of our line fish stocks as has been independently documented over the past three years.”

“Suspension of the fishery in our opinion would result in greater ecological, social and economic harm than good,” Molapo said. DM

In the final two years of his life Van Gogh averaged about three paintings per week.

How the mini-budget relaxed exchange controls

In the wake of Covid-19, we need to recalibrate global capitalism through sustainable investment