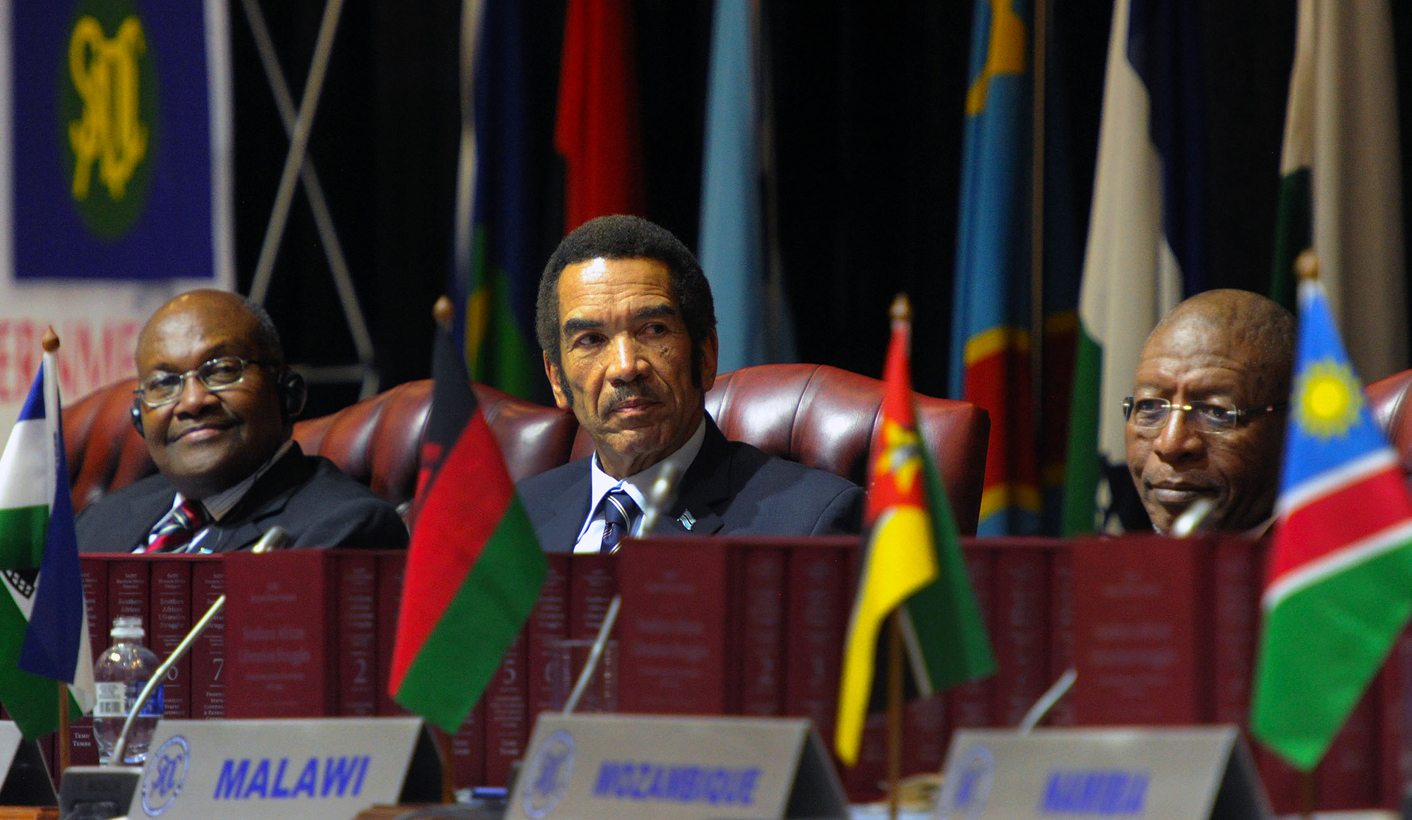 Too many mines, too little to show for them – that is Botswana’s problem. Diamonds, copper, nickel – all have been hard hit by falling world resource prices, and for the first time since independence, the country historically seen as one of Africa’s major success stories is confronting real economic decline. By Joel Konopo for INK.

Botswana’s $14-billion economy contracted by 1.7% in 2015, weighed down by persistent power and water cuts that disrupted factory production. It will struggle to achieve 3% growth in 2016.

Rating agency S&P warned last month that Botswana faces a “deteriorating outlook” in 2017, suggesting a downgrade from A-/A-2 sovereign credit rating could be on the horizon.

For decades, Botswana has been praised as an “African tiger” that has avoided the resource curse – the corrosive effect of strategic mineral resources in promoting social divisions and kleptocratic elites.

It has achieved an 85% literacy rate and 90% of children of primary age are enrolled at schools. Most HIV-positive citizens receive life-saving drugs.

Official figures put unemployment at 19%, but the accelerating closure of mines and factories is likely to push the figure higher.

Youth unemployment now exceeds 40%. A fifth of the country’s two million people live on less than $2 a day, and across the country the ranks of young and embittered are swelling.

Government appear to be losing patience with dissenters. Last year, for example, a group of unemployed youths marched on parliament demanding that government take a more active role in job creation. Riot police violently suppressed the protest and arrested journalists.

Mining has been the driving force of Botswana’s economy, helping the GDP grow at an average of 7% a year for most of the 1990s. But price volatility, fuelled by the cooling of the Chinese economy, and the growing haemorrhage of mining revenues to corrupt officials and businessmen has weakened the sector.

Diamond sales – which contribute a third of the country’s GDP – have lost their sparkle, declining by up to 30% in market value over two years, according to S&P report published in December 2015.

Last year, Debswana, a 50/50 venture between Botswana government and De Beers, closed its Damtshaa diamond mine, adding woes to an industry that has shed up to 30,000 jobs according to the Business Weekly and Review newspaper.

At least six mines and “sightholders” – companies that turn rough stones into finished gemstones before selling them directly to jewelers such as Forevermark and Tiffany & Co – have gone out of business since 2011.

They include operations that closed in 2011 and 2016, and leaving 600 workers without jobs. Australian copper junior miner Discovery Metals Limited filed for bankruptcy last year, leaving 450 workers near the Okavango Delta out in the cold, while African Copper closed its operations at Mowana and Thakadu in central Botswana.

On August 31 last year the state-owned BCL – Botswana’s biggest copper and nickel mine –collapsed into bankruptcy after enduring three decades of losses, throwing 5,000 miners out of work and dealing a heavy blow to the Francistown/Selibe-Phikwe regional economy.

BCL was holed by a combination of ills; a global slump in commodity prices; clumsy, incompetent management; and political inertia. With losses of P1.2-billion 2015 alone, it had P7-billion in debts and liabilities.

The company’s woes had a knock-on effect: BCL subsidiary Tati Nickel – in which Russian mining giant Norilsk Nickel has a stake – also closed, while the Morupule colliery, a major supplier to the nickel mines, faced major downscaling.

Other challenges that contributed to the country’s faltering performance. Low global growth and ebola kept many tourists away from Africa for most of 2015. Tourism contributes 12% to Botswana’s GDP.

Past errors weigh heavily, too, including Botswana’s failure to sufficiently diversify its economy, particularly through coal exports and growing the financial services industry.

With untapped reserves exceeding 200-billion tonnes, the country could become the world’s largest coal exporter to economies such as China. Yet red tape has stalled the construction of a 1,500km railway link to Walvis Bay, which exporters would require.

President Khama has made matters worse by introducing stringent new work permit regulations that are scaring away investors – applying for a work permit has become onerous. The new regulations, including a dreaded point-based system, appear to have alienated many Chinese investors, who have sought alternative investment destinations in Mozambique and Zambia.

The productivity and competitiveness of business in Botswana are dismal, according to World Banks’ Ease of Doing Business report. It takes two weeks to register a company in Botswana and a day to do so in Rwanda.

Moatlhodi Sebabole, economic researcher at First National Bank of Botswana, believes that job losses have accelerated financial pressures on ordinary households, which has in turn had a trickle-down effect on the economy.

“Loss of jobs has resulted in pressure on the property market,” said Sebabole in an interview with the Business Weekly and Review newspaper.

Even the commercial banking sector, considered more resilient than others, is seen by the central bank as “weakening” because of the general decline of the economy. The financial services sector contributes 11% of GDP.

Placed 35th out of 176 countries, Botswana maintains its lofty position in Transparency International’s latest clean government rankings. But in tandem with economic decline, corruption is on the rise – critics point to a pervasive culture of impunity among high-ranking politicians and civil servants, particularly Khama’s allies.

“It’s our turn to eat,” the former secretary-general of the Botswana Democratic Party, Mpho Balopi, remarked in 2013 to The Voice newspaper.

The head of the country’s spy agency, Isaac Kgosi is accused of using his position to undermine efforts to investigate him after he was linked to the receipt of shares from major supermarket chain Choppies in 2013.

Khama’s younger brother, Tshekedi Khama, minister of tourism and conservation, has been at the centre of a scandal after purchasing a luxurious Beechcraft King Air 350, worth P50-million, at the taxpayer’s expense.

Khama claimed the plane was for anti-poaching missions – despite objections by an aviation expert who said anonymously that the aircraft was not designed for such a purpose.

Tshekedi, who is seen as having presidential ambitions, has no patience with due process. He recently signed a P17-million tourism deal with little-known Dubai tourism company without involving key officials in his ministry – and was later forced to apologise.

While his brother Ian was commander of Botswana Defence Force, he benefited from a defence procurement, through his company, Seleka Springs.

The president also has an appetite for grand, wasteful projects. He recently ordered eight second-hand Gripen model “C” and “D” fighter jets worth P22-billion – almost half the country’s annual budget – that an aviation expert said the military neither needs nor can afford.

In December 2015, when commodity slump began to bite, he withdrew P3.5 billion from the Pula Fund, a stabilisation reserve created with diamond revenues, to create an economic stimulus package.

Critics allege that the money was largely splashed on tenders for loyal BDP members.

Many institutions set up to fight corruption have themselves been compromised. Opposition politicians say the Directorate on Corruption and Economic Crime (DCEC) is weak and lacks independence.

But the real challenges may well be political. Botswana is a democracy along the lines of Japan, where a single party has dominated for decades, but that might be changing. The BDP’s popularity has been on the decline, hitting a new low of 47% in the 2014 election.

Khama is barred by the Constitution from running again in 2019 and will be succeeded by an altogether duller figure, current BDP chair Mokgweetsi Masisi.

If Boko defeats Masisi at the polls in in 2019, he will take the helm of a ship of state that seems to be drifting towards for the rocks. DM