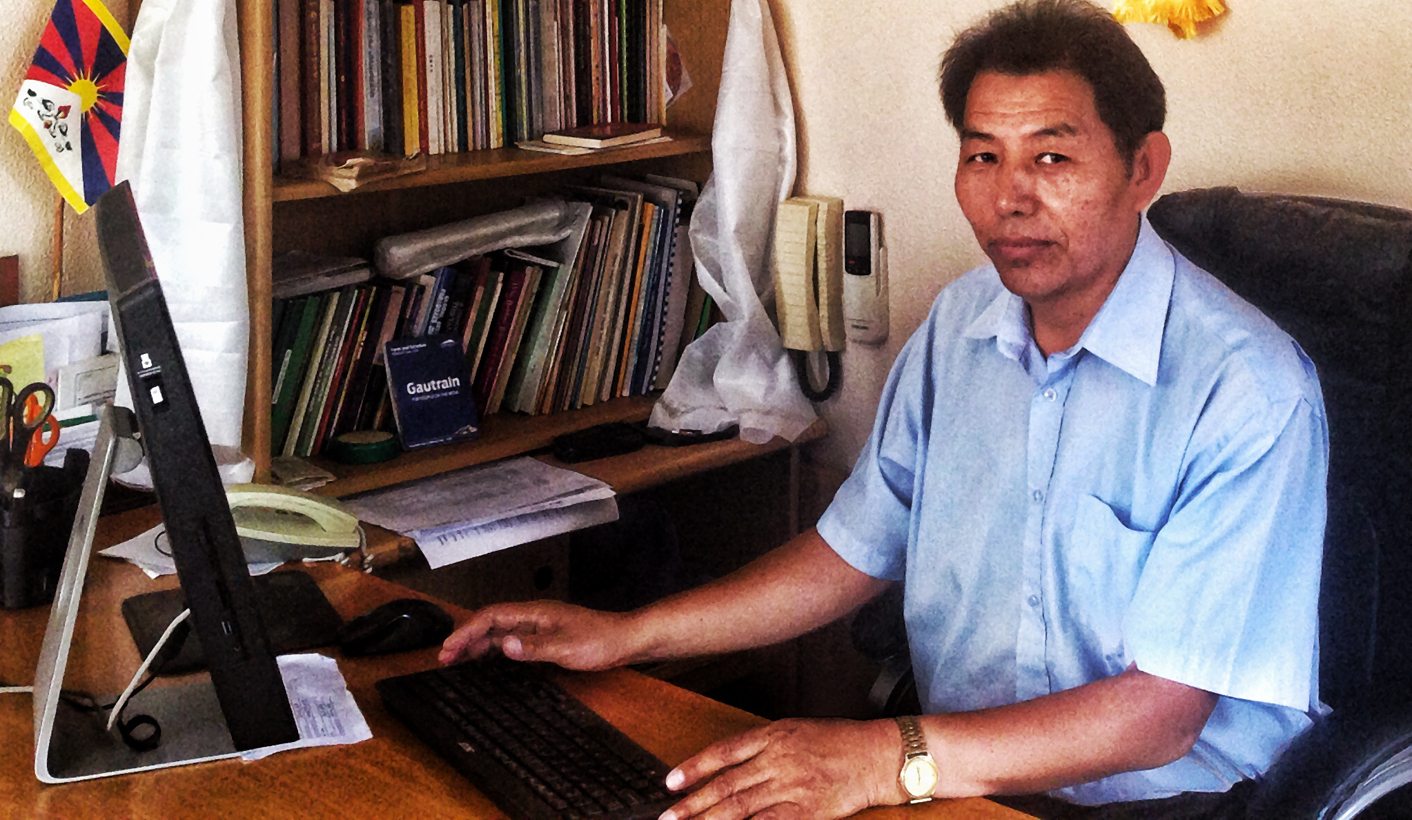 Addressing the country in his State of the Nation Address, President Jacob Zuma affirmed the government’s support of China’s political principles. Among them is the refusal to grant true autonomy to Tibet – which many believe is the reason why exiled Tibetan leader the Dalai Lama has twice been denied a visa to enter South Africa. In the SONA audience was the Dalai Lama’s new representative in South Africa, Ngodup Dorjee. REBECCA DAVIS paid him a visit.

The Chinese embassy in Pretoria is a sprawling complex set among manicured green lawns, with a Chinese flag waving proudly at the entrance. It is a world apart from the premises out of which Tibet’s representative in South Africa carries out his duties.

To find Tibet House, you must venture down a side street in Centurion until you encounter what appears to be a slightly rundown suburban house. The only external sign of its significance is an easily missed bronze plaque next to its garage, which reads: “Office of Tibet”. In its garden, faded Tibetan prayer flags droop overhead.

This is the new home of Ngodup Dorjee, the Dalai Lama’s man in South Africa. He’s been in his role for a little under two months. In the small office from which Dorjee conducts his business, he sits under a framed portrait of the leader he calls ‘His Holiness’. Dorjee says that the world’s most famous Buddhist monk is in good health at the age of 82.

“His Holiness has been very active for the last months,” Dorjee says. “He has three commitments: to build universal ethics, religious harmony, and to work for Tibet.”

The Dalai Lama is a global traveller, but one country he has not been able to set foot in for the last 13 years is South Africa. Invited to attend Archbishop Desmond Tutu’s 80th birthday celebrations in 2011, the Dalai Lama was not granted an entry visa by the South African government. He had similarly been refused entry in 2009 to attend a conference of peace laureates. Though the South African government has denied it, it is widely believed that the Tibetan leader’s snubbing was as a result of a desire not to offend China – and risk disrupting an important economic relationship.

Dorjee is diplomatic on the subject.

“This is to some extent disappointing, but His Holiness always says that he does not want to put the host country in an inconvenient position,” he says. “I hope that this policy will change, given the fact that there is a lot of the South African public who wanted to have him here. His words are at the universal, ethical level. In the current crisis of the world there is need for these people [like the Dalai Lama].”

Dorjee pauses. “I hope [the ANC government] will reconsider,” he says.

That Tibet is able to have an office in South Africa at all – though it is classified as an NGO rather than an official diplomatic outpost – is due to former president Nelson Mandela, who allowed the Office of Tibet to set up after the transition to democracy in 1994. There are 11 such offices worldwide, and it is Dorjee’s job to rally support for the Tibetan cause on the African continent.

Tibet’s status is currently somewhat analogous to an apartheid homeland. “Tibet is now called the Tibet Autonomous Region,” Dorjee explains. “But there is huge regulation from the Chinese government, and no real autonomy.”

The exiled Tibetan government, which the Dalai Lama leads from India, states that “Tibet’s human rights situation is deteriorating and requires urgent international intervention”. Of particular concern is the inability of Tibetan Buddhists to practise freedom of religion, speech, or assembly. Since 2009, 145 Tibetans have self-immolated (set themselves on fire) in protest.

Dorjee says that the Dalai Lama headed a big religious gathering in Bodh Gaya, India, in January. Thousands of Tibetans attended the gathering as a form of pilgrimage: Dorjee describes it as a “once in a lifetime opportunity”. The pilgrims were instructed by the Chinese authorities to return to Tibet immediately or risk losing jobs – or worse. “This epitomizes how much restriction on religious practice in Tibet there is,” Dorjee says.

Though reforms in recent years have brought an improvement in economic conditions for Tibetans, Dorjee says it is no substitute for real freedom.

“To bring the Chinese to the negotiating table, what is necessary is that huge international pressure has to be built up,” he says. “We are working with Chinese dissidents outside who are working to bring democracy in China. This is one strategy. But we need to build international support.”

The ANC government’s lack of support for Tibet’s fight for freedom is a source of sorrow for many Tibetan activists because they believe there are obvious parallels with the struggle against apartheid.

“The ANC has struggled for their freedom and I would assume that they would fully understand what Tibet feels, and what needs to be done, given the fact that they had so much international support [during apartheid],” Dorjee says.

Tibet’s major political ally in South Africa has been the Inkatha Freedom Party. It was IFP leader Mangosuthu Buthelezi who unsuccessfully took court action against the government in 2009 to try to secure an entry visa for the Dalai Lama. It was also Buthelezi who invited Dorjee to attend the recent State of the Nation Address as his guest.

“After meeting with the Dalai Lama, and attending the World Parliamentarians Conventions on Tibet, I understood that the Tibetan cause is eminently reasonable and in keeping with democracy,” Buthelezi told the Daily Maverick on Tuesday.

“Moreover, it has been pursued for decades exclusively through non-violence, negotiations and the moral high ground. Having waged a struggle for freedom on the basis of non-violence, I have the greatest respect for Tibet’s principled approach.”

Dorjee has nothing but praise for Buthelezi on this matter. “[Buthelezi] gets nothing at all from supporting Tibet,” he says. “Just a sense of justice and truth. That is the moral stand which propels him.” He says that in the past the exiled Tibetan government has also received support from the opposition Democratic Alliance, but he has not yet had a chance to meet with the party since assuming his position.

Asked for his impressions on SONA as an audience member, Dorjee laughs ruefully. “The initial disruptions were quite painful to watch, but this happens in many countries – Taiwan and others,” he says. He describes South Africa as “very beautiful”, and a place of “huge potential”.

Dorjee says that the Dalai Lama has no plans in the immediate future to visit South Africa. “But if there is opportunity, I think he would be very glad to visit once again and see this wonderful country.”

He adds: “I would like to tell South Africans we are very grateful for support and we need more support from civil society, from the government, and from the people.” DM