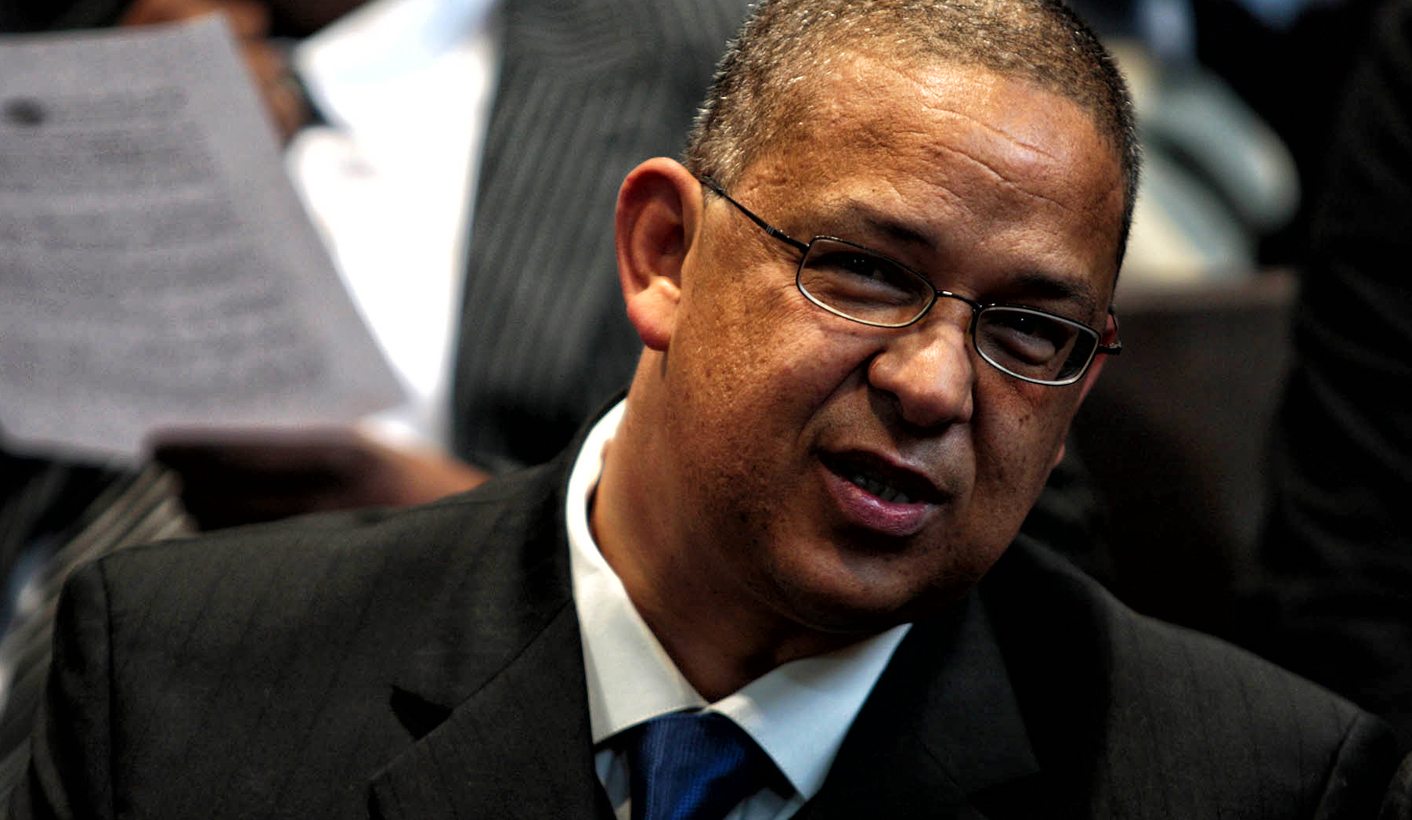 IPID executive director Robert McBride presented an explosive report to Parliament’s police committee on Wednesday claiming that the Minister of Police, Nathi Nhleko, was protecting acting Police Commissioner Khomotso Phahlane, currently being investigated for defeating the ends of justice and possible corruption. McBride said Nhleko regularly ignored IPID reports into wrongdoing by SAPS members. The IPID sketched a Medellín-like scenario of gangs of SAPS and Hawks members fighting and shooting each other at OR Tambo International in an all-out war to control drugs confiscated from smugglers. McBride also cleared up forensic investigator Paul O Sullivan’s role as the complainant in the Phahlane matter. It was lit, as they say. By MARIANNE THAMM.

While Minister of Police Nathi Nhleko might have accompanied embattled acting Commissioner of Police Lieutenant-General Khomotso Phahlane at his appearance before Parliament’s police committee on February 1 in a show of apparent political support, IPID executive director Robert McBride on Wednesday enigmatically told the committee that he enjoyed “complete political support where it matters”.

Asked by a committee member why the minister was not present, McBride replied acerbically, “I am sure he would have loved to have given his support but must be caught up elsewhere.”

The comment reveals the extent of the massive political rupture between the SAPS, the Directorate for Priority Crime Investigation (the Hawks) and the Minister of Police on the one hand, and those seeking to expose alleged corruption and abuse of state power on the other.

McBride did not hold back on Wednesday, saying that while IPID was underfunded, some of the high-profile cases the directorate was investigating included cases where SAPS and Hawks members had shot at each other in what appears to be a drugs feeding frenzy at OR Tambo International Airport. (Co-incidentally, O’Sullivan’s “war” with former convicted Police Commissioner Jackie Selebi was sparked by similar issues relating to SAPS criminality when O’Sullivan was head of ACSA security before he was fired in 2003.)

McBride said police officials were not only killing each other to get their hands on drugs confiscated from mules, but were illegally shifting quantities of drugs through domestic arrivals (presumably while the rest of us sip coffee and tap on our laptops in free wifi areas).

In another case involving SAPS in Sunnyside Pretoria, said McBride, police officers were specifically targeting foreign nationals, seeking to extort money, and – if this was not forthcoming – confiscating stashes of drugs to sell on to the public themselves.

The shocking revelations prompted ANC committee member Leonard Ramatlakane to remark that the situation was reminiscent of drug-infested Bogotá in Colombia.

In reply to questions with regard to the involvement of forensic investigator Paul O’Sullivan in the IPID probe into Commissioner Phahlane, IPID head of investigations, Matthews Sesoko, said O’Sullivan was the complainant in the matter and had provided information “that usually checks out”. McBride later added that he had “the utmost respect” for the investigator.

He told Parliament that O’Sullivan had provided former IPID head Israel Kgamanyane with information but that Kgamanyane, instead of investigating the claims, had informed Commissioner Phahlane. (McBride had been illegally suspended by the minister at the time.)

The IPID head said he regularly sent reports to the Minister of Police who simply sent them back. He had sent a note on Phahlane, he said, “but it is difficult to envisage that he will take the recommendations seriously”.

Phahlane, added McBride, had in the meantime, and since the investigation became public, received a bravery award as well another award “from churches”.

The arrest on Friday of attorney Sarah Jane Trent and later of Paul O’Sullivan were attempts at derailing the investigation into Phahlane, said McBride, and were designed to intimidate them. There was not, he added, “a snowball’s chance in hell that the charges [that they impersonated IPID officers] would stick”.

“Unfortunately for General Phahlane we have recordings of all interactions and at no time time (did) O’Sullivan or Trent present themselves as IPID investigators,” McBride said.

He said when Commissioner Phahlane found out he was being investigated he called in Major-General Mabula, who is under investigation for murder, to intimidate and arrest Trent and O’Sullivan.

“Phahlane has also phoned some of the witnesses,” said McBride.

McBride voiced concern about the independence of IPID and the Hawks after Minister Nhleko offered Kgamanyane a position with the Hawks after he [McBride] had been reinstated. Kgamanyane has been accused of attempting to purge IPID of staff loyal to McBride.

“I am really worried about this. It seems as if the minister told Kgamanyane ‘don’t worry if they bring back McBride, I will find you a job’.”

He suggested that Phahlane had lied to Parliament when he told the committee that he was unaware of the IPID investigation.

“It is easy to target O’Sullivan when the issue is Phahlane’s corruption.”

Committee chair Francois Beukman asked McBride to keep in contact with the oversight committee and that it would monitor developments. DM