amaBhungane: Gupta-owned newspaper in line of fire of n... 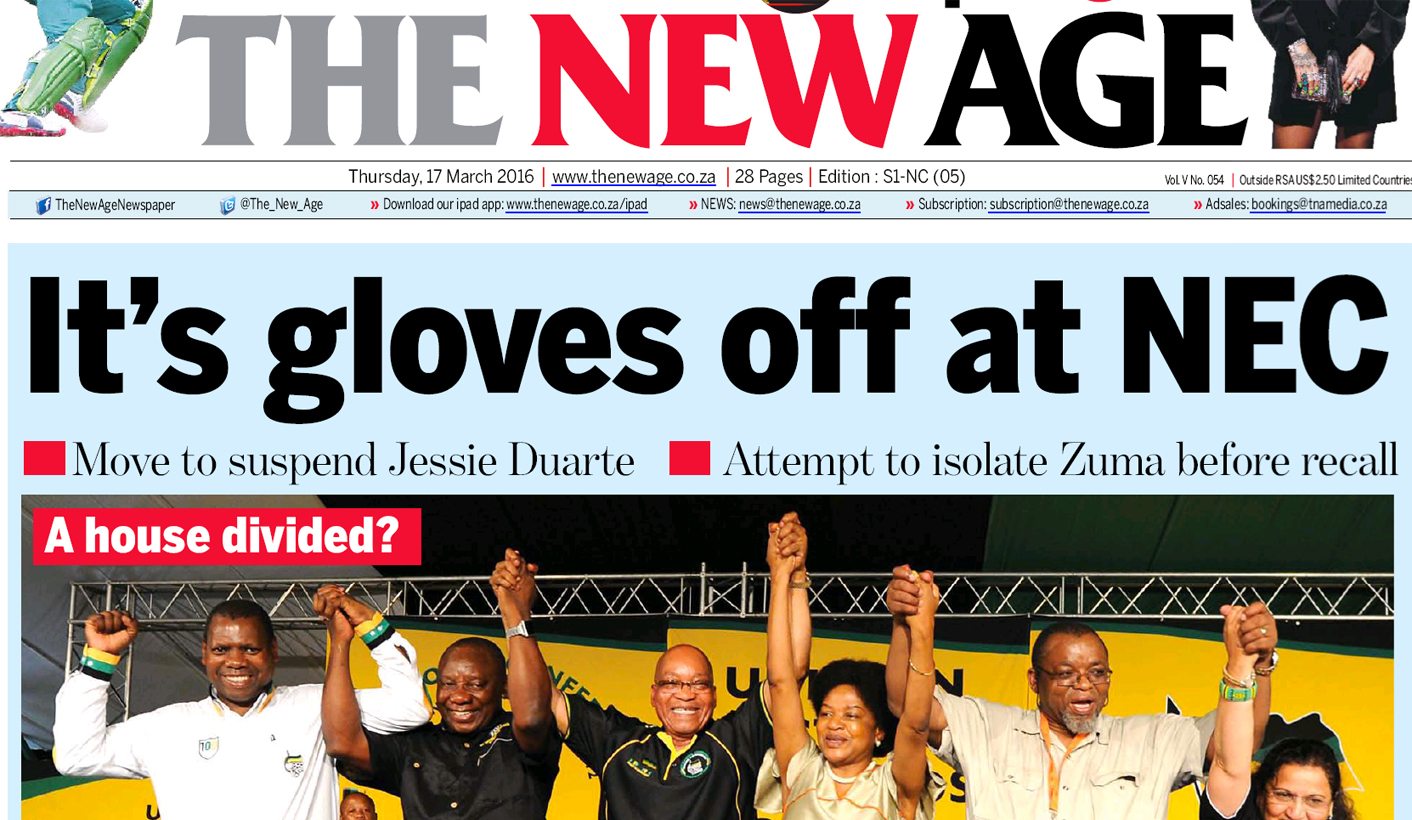 Data gathered by global market research firm Nielsen strongly suggests that the Gupta-owned The New Age newspaper benefits disproportionately from government advertising and that its main backers are provinces perceived as aligned with President Jacob Zuma and the Gupta family. Media lawyers have warned that such bias could violate both the Public Finance Management Act and media freedom provisions in the Constitution. By Micah Reddy for AMABHUNGANE.

The Nielsen data comes on top of numerous media reports of fake twitter accounts and opinion sites, as well as a spin campaign aided by public relations firm Bell Pottinger, that are allegedly serving Zuma, the Guptas and their allies.

The Nielsen figures show that government and public institutions lavished R46-million worth of ad spend on The New Age in the year to October 31, 2016, and that among provincial governments, the North West and Free State were the most enthusiastic contributors.

Nielsen calculates ad spend figures by measuring adverts in each publication of a given title. This is then tallied at flat-rate card rates – the prices media outlets charge before discounts. The figures give a rough indication of the amounts spent on advertising.

According to the figures, the North West spent 45%, or roughly R3.8-million, of its budget on print advertising for The New Age, while the Free State bought just under R4-million worth of ad space, representing 49.9% of its print budget.

The pattern of spending stands in sharp contrast with the proportion of advertising placed in The New Age over the relevant period by other provinces: 5% of total for Gauteng, 1.6% for KwaZulu-Natal, 0.86% for Limpopo, 0.4% for Western Cape and 0% for the Eastern Cape.

The only other sizeable contributors were Northern Cape, which acquired just over R1.1-million worth of The New Age advertising space, translating into 19% of its total print media ad spend, and Mpumalanga (7.8%).

North West and the Free State are headed by premiers Supra Mahumapelo and Ace Magashule respectively. They are two parts of the triumvirate known as the “Premier League”, also including Mpumalanga’s David Mabuza, which is seen as a cornerstone of the Zuma faction.

Magashule has controversially supported projects linked to the Gupta family, including a R140-million dairy scheme in Vrede. The Free State Development Corporation, which took over the Vrede project, spent R100,000 on advertising in The New Age in the year up to October 31 last year.

It has also been reported that Magashule’s son, Tshepiso, was employed by a company owned by Zuma’s son, Duduzane, and the youngest Gupta brother, Rajesh.

The North West government denied that the expenditure on The New Age had anything to do with alleged links between Mahumapelo and the Gupta family.

The province’s spokesperson, Brian Setswambung, said that the province spent R10.9-million in total on print media titles, and that R2.23-million, or about 20% of total, was spent on The New Age.

The Free State government did not respond to written questions.

However, the North West’s stated figures remain disproportionately high for a paper with such a small footprint.

While most major newspapers submit to auditing by the Audit Bureau of Circulations (ABC), The New Age has steadfastly refused to do this.

By calculating the single-copy sales of papers, and determining how many people are willing to spend money on a particular title, ABC is the touchstone of a newspaper’s popularity.

Media and marketing experts told amaBhungane that in the absence of audited circulation figures, advertisers steer clear of The New Age.

Although not as reliable, readership figures – which estimate the number of individuals who read a newspaper without necessarily buying it – provide another indication of The New Age’s footprint.

The South African Audience Research Foundation’s AMPS figures for December 2015, based on a surveyed sample of the South African public, give a readership figure of 136,000 for that newspaper, compared to the Mail & Guardian’s 564,000, City Press’s 1.6-million, and 3.7-million for the Sunday Times.

Setswambung said that it was “our observation that The New Age penetrates the deep rural areas of the province”.

The New Age was sent a detailed list of questions by e-mail. These and follow-up enquiries went unanswered.

The Nielsen data also suggests bias on the part of national government: it spent R11.5-million on advertising in The New Age in the year up to November 2016, compared with R7.2-million for City Press and R1.9-million for the Mail & Guardian.

The New Age has also scored other lucrative deals from the state and semi-state bodies, including sponsored breakfasts and the bulk buying of copies.

This followed revelations that Eskom had already spent R12-million on 10 business breakfast briefings over three years. In 2015, Fin24 reported that another struggling parastatal, South African Airways, had spent R9.4-million on purchase of nearly six million copies of the paper.

The Nielsen data shows that state-owned companies continue to be milch cows for The New Age. For the year ending October 31, 2016, SAA bought R2.2-million worth of ad space before discounts; the SABC R3.4-million and Transnet R4.5-million.

The Nielsen figures also show that a large slice of advertising in The New Age is either in-house or taken up by Gupta-linked companies such as Oakbay (R792,660), JIC Mining Services (R9.5-million), Clifftop Lodge (R2.1 million), and Sahara Computers (R2.4-million).

One market researcher, who asked not to be named, told amaBhungane that newspapers that struggle to fill advertising space tend to use a greater proportion of in-house adverts, known in the trade as “stiffs”. The New Age took R38.3-million worth of advertising space in its own paper in the year to November last year.

Pressure to favour The New Age has been brought to bear on the Government Communication and Information System (GCIS), which falls under the department of communications. GCIS is responsible for co-ordinating government’s media strategy and some bulk media buying.

Last year former GCIS chief executive Themba Maseko alleged that he was removed from his position in 2011 after rebuffing efforts by the Guptas to have him channel more ad spend to their media companies.

Maseko told amaBhungane: “Gupta people were calling up national government’s communications people and telling them I had said they must advertise with The New Age.”

Maseko’s story is corroborated by another former GCIS employee who asked to remain anonymous. According to the source, heads of communications from government and state-owned companies complained that Gupta representatives were pressurising them to advertise in The New Age, and were claiming that political principals were insisting more ad money be devoted to the paper.

The source claimed to have had first-hand experience of the Guptas’ name-dropping in an attempt to get more government ad money.

Another GCIS insider said that over the years GCIS staff have been “instructed to advertise with the Guptas”.

Media lawyers have cautioned that the government’s channelling of public money to The New Age may place it on the wrong side of the Public Finance Management Act.

The Act sets out the fiduciary responsibilities of public entities and government bodies and aims to prevent wasteful expenditure. If the purpose of government advertising is maximum coverage, The New Age’s circulation does not appear to justify the scale of state expenditure on that paper.

“Where an organ of state contracts for advertising space in the media, it must act in compliance with the relevant regulatory framework as well as the Constitution.

“Section 217 of the Constitution enjoins the state in its procurement to do so in a ‘fair, equitable, transparent, competitive and cost-effective’ manner’.”

Milo added that “withholding advertising based on critical reportage, or any favouritism based on positive stories, would offend the right to freedom of expression, as much as it would fall foul of public procurement principles.” DM