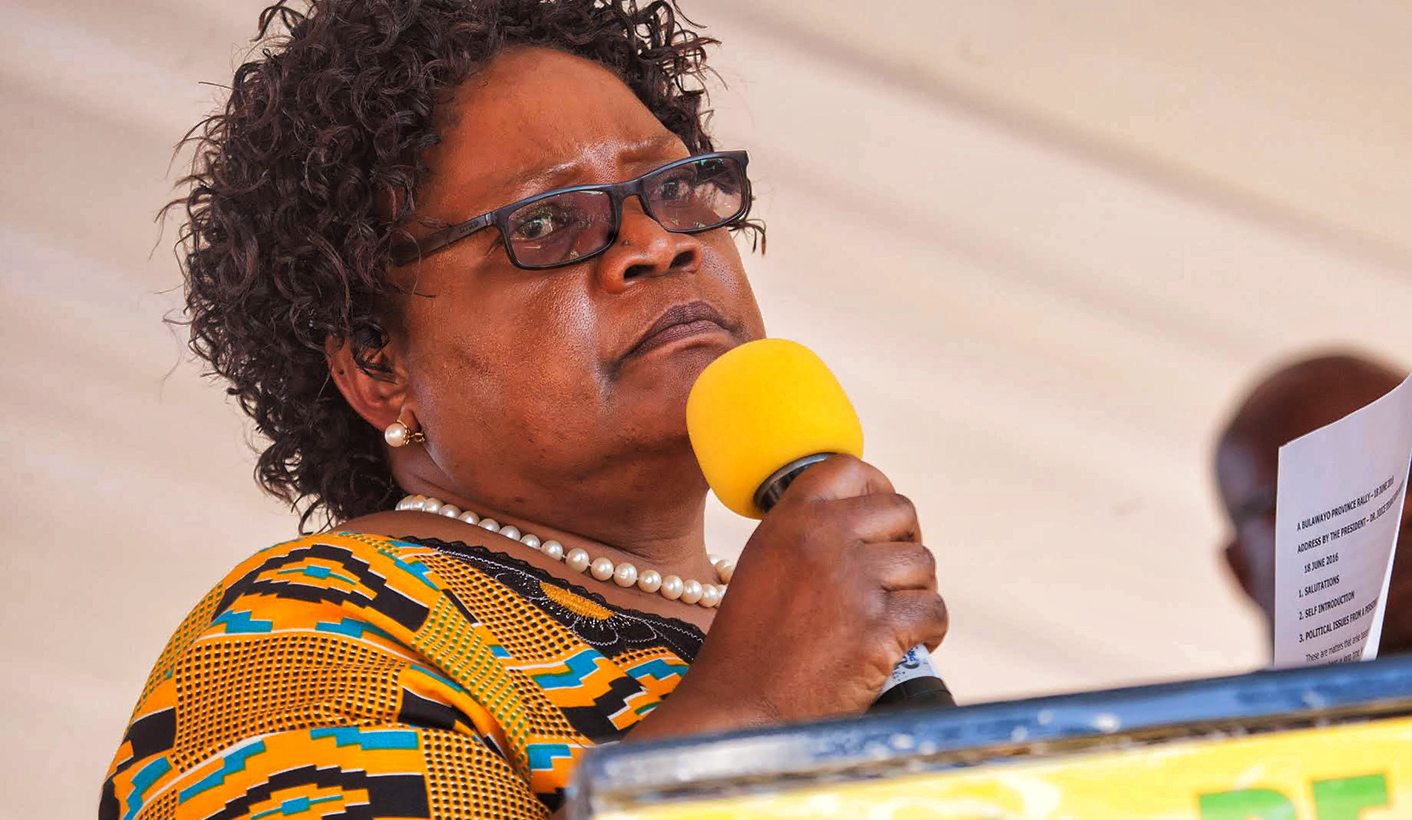 Ever since its inception, Joice Mujuru’s Zimbabwe People First party has been a headache for other opposition leaders. The new party’s apparent implosion over the last week will make it a lot easier to build a united opposition coalition ahead of the 2018 vote. By SIMON ALLISON.

The expulsion of Joice Mujuru from both government and ruling party, in December 2014, was a typically brilliant political gambit from Zimbabwean President Robert Mugabe. With one stroke, he removed a major threat to his power from within Zanu-PF, and lumbered his opponents outside the party with a dangerous, destabilising new player.

And Mujuru did not disappoint. Along with a handful of other Zanu-PF exiles, most prominently Didymus Mutasa and Rugare Gumbo, Mujuru established Zimbabwe People First (ZimPF) just under a year ago, and demanded her seat at the opposition table.

It’s a crowded table. Although Morgan Tsvangirai’s Movement for Democratic Change (MDC-T) is the undisputed heavyweight, there are more than a dozen smaller parties all vying for airtime. These were mostly known quantities, however, unlike Mujuru’s ZimPF. How much support did she really have? Could she tap into traditionally Zanu-PF constituencies? Could such a longtime Zanu-PF stalwart, and formerly close Mugabe ally, really be trusted?

With the 2018 elections on the horizon, one thing Zimbabwe’s opposition parties can agree on is that it is vital to present a united front. A strong opposition coalition will beat Mugabe. A weak, fractured opposition will be easy pickings for Zanu-PF’s formidable electoral machine. But the presence of ZimPF made the negotiations around that coalition exponentially more complicated – especially because Mujuru was angling to be leader.

As one of Tsvangirai’s senior advisors told the Daily Maverick, speaking anonymously: “We know we need to work with Mujuru. But it feels like we are dealing with the devil.”

Perhaps that’s why the MDC-T has been so slow to agree to any deal. Although coalition negotiations are at an advanced stage, Tsvangirai has been reluctant to put pen to paper – and now his patience has been handsomely rewarded.

In the space of three tumultuous weeks, ZimPF’s credibility has unravelled. The first major stumbling block was in the Bikita West by-election, in which ZimPF’s candidate was handsomely defeated by the Zanu-PF candidate. The defeat revealed not only the fragility of ZimPF’s supposed constituency, but also highlighted internal divisions within the new party.

“It is unclear why ZimPF… put up a candidate in the Bikita West election at all,” observed International Crisis Group’s Piers Pigou. “There were internal ZimPF tensions over whether or not to participate, and the provincial party leaders who pushed against it have now resigned. In the end, the failure of ZimPF’s candidate in Bikita West has now damaged ZimPF leader Mujuru’s prospects of leading an opposition coalition in the 2018 elections.”

Things were about to get even worse. Last week, a coterie of senior party officials including Mutasa and Gumbo were abruptly expelled from the party, bringing those internal tensions into stark relief. Insults flew between the various factions. Mutasa’s crowd then claimed that actually they had expelled Mujuru from the party.

“The problem is that they were an untested entity when they were together, and they remain untested as separate entities. I presume having fired each other there’s going to be some kind of legal fight over the assets, the name, etc. That will occupy them for months. For me it’s a further manifestation of opposition fragmentation, and unfortunately a reflection of the sad politics of personality that continues to characterise politics in Zimbabwe,” Pigou told the Daily Maverick, in a separate comment.

Alex Magaisa, political analyst and former adviser to Tsvangirai, said that ZimPF’s apparent implosion did not come as a surprise. “This was a group of disgruntled people who left Zanu-PF not because they wanted to, but because they were caught up in challenges within Zanu-PF. The unity between them was more because of their predicament than the values they shared. There was bound to be trouble at some point.”

Magaisa argues that the big winner is Tsvangirai himself, because Mujuru’s case to be leader of the opposition coalition has been substantially weakened. In fact, the MDC-T may no longer feel the need to include any elements of ZimPF. They no longer have to work with any devils.

“It’s a blessing in disguise that there has been this rupture. Otherwise the coalition would have included characters who had an insincere interest in building a solid coalition against Zanu-PF. It also means we don’t have too many problems now about who should lead the coalition. In the past it appeared that Mujuru was a contender for leadership, but it’s becoming clear after the shenanigans in her party, as well as a very heavy defeat in the recent by-election, that there remains only one person with solid support. If there’s going to be a coalition, then it’s going to be built around the MDC led by Morgan Tsvangirai,” said Magaisa. DM