SONA2017 Debate, Day One: Insults, heckling and profanity in the House 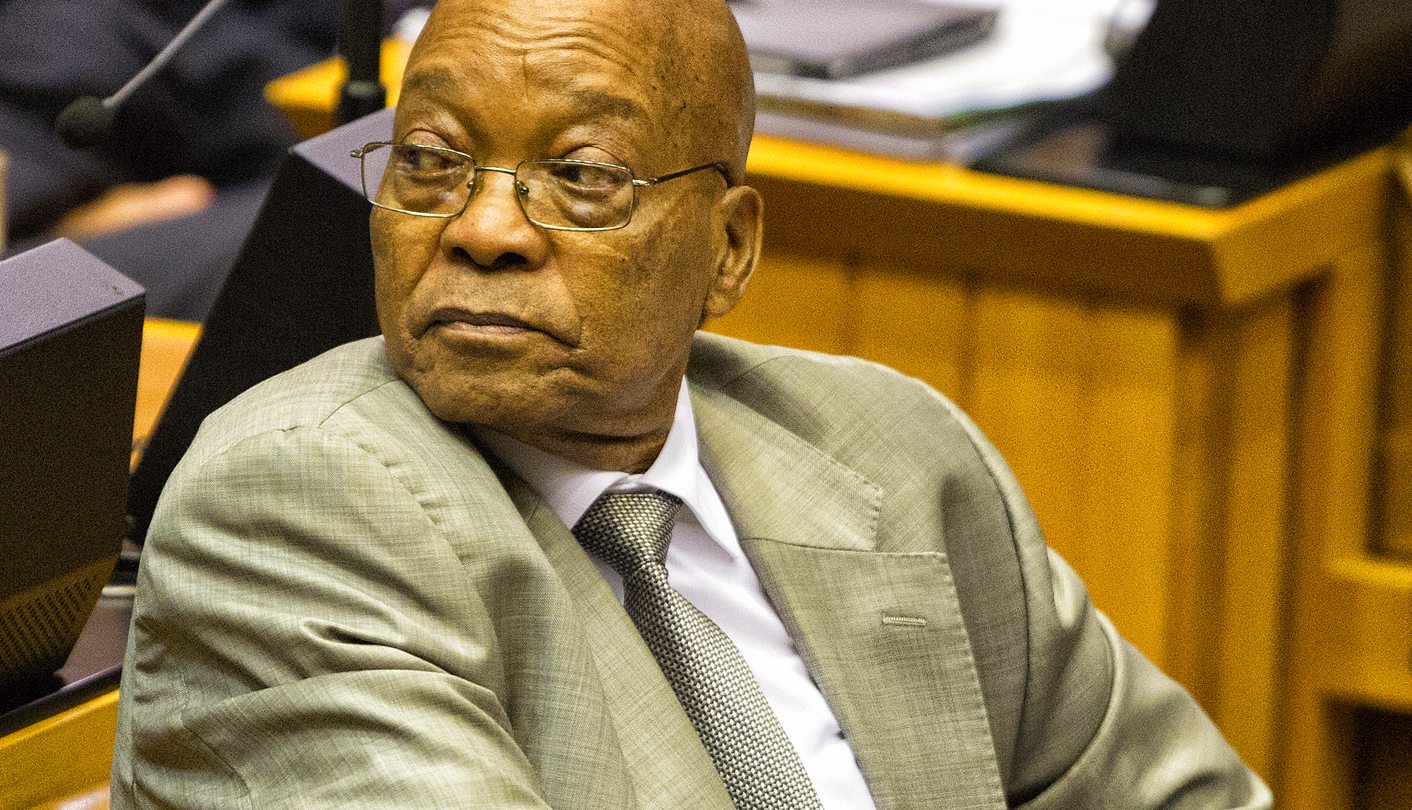 Much has been said about the need to restore the decorum of Parliament. But Tuesday’s parliamentary debate on the presidential State of the Nation Address (SONA), despite appeals for dignity, again showed that some are more equal than others. ANC MP Bongani Mkongi hauled out the racial slurs – first speaking in English and, when asked to withdraw, repeating them without sanction in isiXhosa. It was the latest display of shenanigans which, alongside opposition complaints of biased presiding, continues to highlight parliamentary malfunctions. By MARIANNE MERTEN.

Heckling and points of order are all part of the legitimate arsenal of parliamentarians. So are sharp wit and quick repartees. Racial stereotyping isn’t, and neither is a long list of unparliamentary language including animals from lion to dog, words like “idiot”, expressions like “fuck you” and gestures such as pointing fingers. Nor is drowning out the speaker at the podium.

Still, ANC MP Bongani Mkongi described DA leader Mmusi Maimane as “a white man in a black skin”, having taken umbrage at the DA politician’s use of “lost generation” to describe today’s black youth and its challenges of high levels unemployment and low access to education.

DA Chief Whip John Steenhuisen intervened to point out that racial stereotyping had long ago been ruled unparliamentary. And National Assembly Speaker Baleka Mbete, who is also ANC national chairperson, found herself in the spotlight. “Honourable Mkongi, you are aware indeed racial stereotyping is not allowed in the House. Can you just withdraw?” Mbete said.

Mkongi retorted, “I would like to make your work easy” and switched to isiXhosa: “uNdlebe zikhanyile onobuso obumnyama”, loosely translated as “a white with a black face”, effectively repeating his initial, now ruled unparliamentary, statement. Based on the idiomatic expression “ooNdlebe zikhanya ilanga (We can see through your ears)”, it is widely seen as insulting as whiteys usually are just called abelungu.

Steenhuisen again intervened, but Mbete maintained that the comments had been withdrawn and the staff assisting presiding officers agreed. Indicating that she would examine Hansard, the official transcript of proceedings, Mkongi was allowed to proceed unsanctioned to outlined the achievements of President Jacob Zuma’s administration.

Mkongi’s comments are part of a long-established tactic by the ANC parliamentary benches to target Maimane, who does not mince his words about Zuma, whose government he on Tuesday described as “murderous”. It’s all part of the ANC playbook to describe the DA as racist and a return to apartheid.

Mkongi’s comments also highlight how those in the parliamentary benches of the governing ANC have long ago become used to getting away with verbal attacks. In the aftermath of Thursday’s SONA2017 forced eviction of EFF parliamentarians, the DA’s walk-out was met by shouts of “fuck you”, “racist” and “sell-out”. A day later the ANC parliamentary caucus said this would be “discussed”, while squarely blaming the EFF, or “rampant anarchists”, and the “opportunistic” DA for the SONA2017 mayhem.

No other opposition party faced being disrupted on Tuesday. In the absence of the EFF – its representatives were boycotting the debate, the party announced from Johannesburg, although several of its MPs attended the day’s committee meetings – it was DA speakers who were interrupted by points of order and heckling.

Towards the end of a more than four-hour debate, presiding officer Thandi Modise, the chairperson of the National Council of Provinces, intervened to quieten ANC benches: “You are allowed to heckle but you are not allowed to drown the speaker at the podium… Honourable members, you are not heckling, you are screaming.” DA MP Phumzile van Damme’s finger-pointing and describing an ANC MP as “idiot” had raised tempers again. Modise reprimanded her for finger-pointing and unparliamentary language that was withdrawn, unconditionally.

Predictably, the House had divided into ANC speakers lauding Zuma’s SONA speech and government’s stated turn to radical socio-economic transformation, some four years after the governing ANC adopted this as a leitmotif at its 2012 Mangaung national conference.

Rural Development Minister Gugile Nkwinti, deferentially referring to Zuma as leading this radical socio-economic transformation, indicated that his department would conduct an audit of colonial land possession. Once done, there would be a new law and a constitutional amendment.

Although he did not elaborate, this can only be a reference to the June 1913 Natives Land Act cut-off for land restitution in the Constitution. If the ANC can muster support from other political parties – needed as it lacks the required two-thirds majority to effect constitutional changes – such an amendment would open the land restitution process to those dispossessed of their land before 1913, such as the Khoi-San. It was one of the few concrete announcements in Tuesday’s debate, otherwise marked by rowdiness, heckles and insults.

On the other side, opposition leaders were less complimentary. United Democratic Movement (UDM) leader Bantu Holomisa talked of people’s anxiety and anger over unfulfilled promises of service delivery, and called for an end to provinces. “Do we really need these glorified homelands?” he asked, announcing a national consultative conference open to all to take stock of 22 years of democracy.

IFP leader Mangosuthu Buthelezi expressed his despondency over lack of action. “The intention to eradicate mud schools is commendable. But we have heard about this for years,” he said. “In 2011, 496 inappropriate structures were identified to be rebuilt by 2014. Six years later, only 173 have been eradicated.”

As the SONA debate continues on Wednesday and ends on Thursday with Zuma’s reply, questions remain as to whether the so-called “white shirts” were all members of the parliamentary protection service, or also included SAPS officials. The EFF said it has approached the police watchdog, the Independent Police Complaints Directorate (IPID), to investigate.

And Tuesday’s parliamentary proceedings unfolded against questions over whether Mbete correctly applied the rules when she called in the protection service at SONA2017.

The rules require the presiding officer to name the MP who must leave the House. Mbete named Cope MP Willie Madisha, who refused to leave and was escorted out be a handful of “white shirts”, and EFF leader Julius Malema, according to the official minutes of the joint sitting. None of the other EFF parliamentarians were named as the “white shirts” entered en mass to forcibly evict the whole EFF caucus.

All Mbete said was, “I have called on the parliamentary protection services to come into the chamber”, and later added: “We see honourable members use their hats to harm others.”

The “physical removal” of EFF parliamentarians and Madisha was referred to the joint rules committee for “consideration”, according to last Friday’s Announcements, Tablings and Committee Reports (ATC), or Parliament’s record of work.

Reporting back on the SONA2017 mayhem ahead of Tuesday’s debate, Mbete said claims of cable ties being issued were referred to the police for investigation as further investigations are under way with regards to powder dropped in the public gallery. “The matter is therefore receiving attention. We can confirm, however, it was not tear gas or pepper spray.”

Also pending is a response to the presiding officers’ written request for “clarity” from the defence minister about the deployment of armed soldiers, including military police, in the parliamentary precinct. “We await the response of the minister before engaging further,” said Mbete.

She also announced that the use of “unparliamentary and unacceptable” language during SONA2017 had been brought to her attention. “Insults and similar language do not serve to enhance the dignity of Parliament. This conduct sets a bad example to the nation. We are leaders and we are expected to behave as such,” Mbete said.

Her appeal was echoed by Minister in the Presidency Jeff Radebe, who in opening Tuesday’s SONA debate urged “all of us to restore the dignity and decorum of this prestigious House”.

But saying this, no matter how often, doesn’t make it so, particularly amid a deep-seated belief that numerical majority rules – and makes right. DM