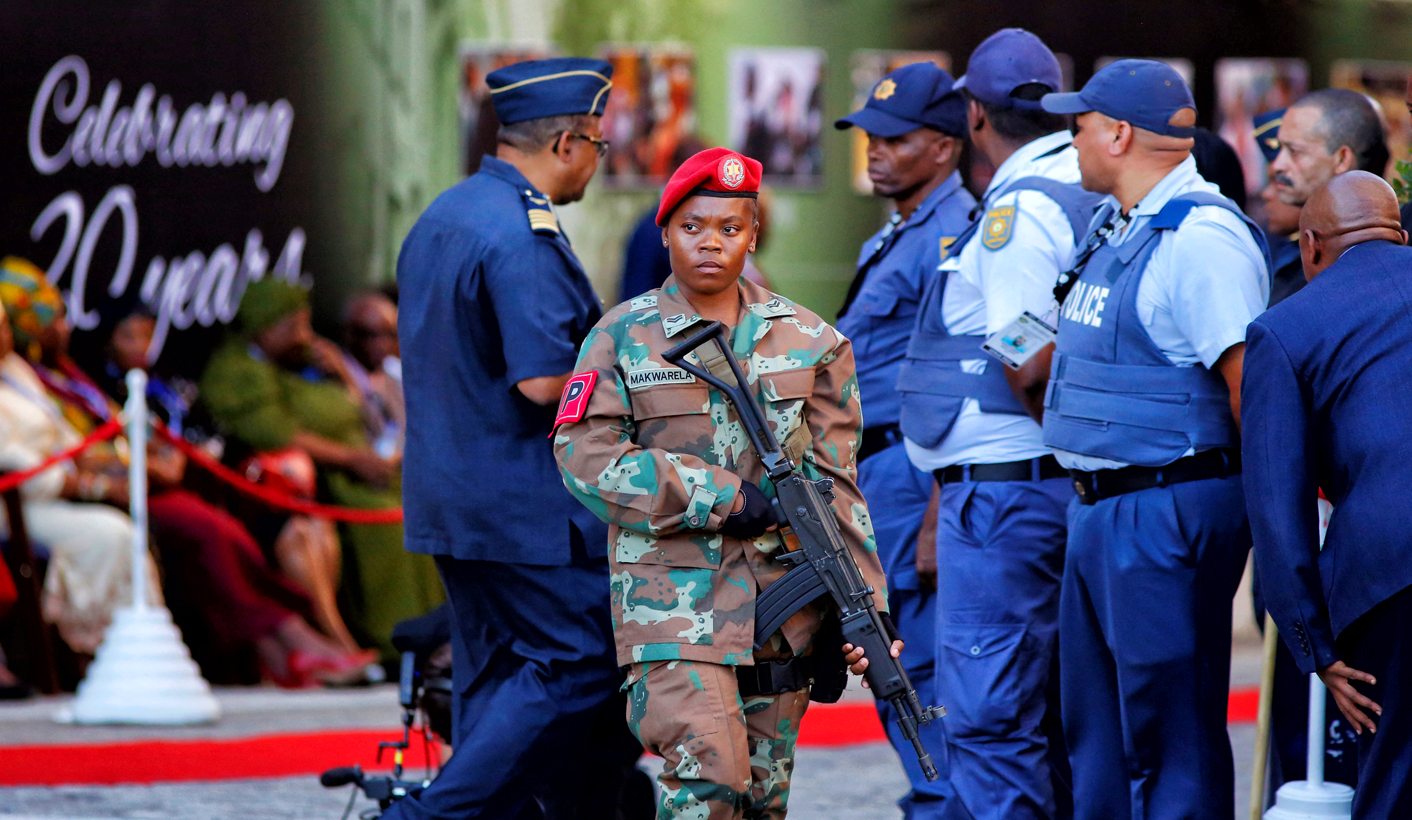 The annual Opening of Parliament has gone from an event of national pride and pageantry to an undignified fiasco. It is just another thing that the wrecking ball that is the Jacob Zuma presidency has ruined. If a president has to hide behind armed troops in order to face the nation, perhaps he should not be doing so at all. At this rate Zuma could roll up to the entrance of the National Assembly in a military tank next year and, perhaps the year after, the Special Forces will do an aerial manoeuvre to drop him at the podium in the House. Or maybe a hologram Jacob Zuma will pummel us with a 5,000-word treatise. By RANJENI MUNUSAMY.

When State of the Nation addresses used to be things of dignity and grandeur, they would take place on Friday mornings. During the Mandela and Mbeki presidencies, Capetonians could stand on the streets and witness the magnificence of the South Africa security services as they paraded past. School children would be brought to town in their school uniforms to wave little South African flags and there was an air of festivity.

There was much excitement when the president and deputy president’s convoys drove by. In fact, the reason Zuma arrives in a popemobile-type bus is precisely for onlookers to see him. But what onlookers are there now? Snipers on rooftops? Riot police lined up behind shields or patrolling the streets in armed vehicles? Frightened residents peeping through their blinds?

When Zuma became president, he decided to move the SONA to Thursday evenings for more people to be able to watch it after their workday. In this way, larger number of people would have direct information from the president about government’s programme for the year and other important issues. Zuma’s speeches are usually more effective than tranquiliser darts in putting people to sleep but in keeping with the constitutional obligation to make the work of government transparent and accessible, millions of people are given the option to watch or listen to him.

Then came the 2014 elections and the entry of Julius Malema’s crimson army into the opposition benches. The Economic Freedom Fighters (EFF) changed the dynamics (and the dress code) in Parliament, and introduced a new aggressive mode of politics.

The EFF’s debut came just after the former Public Protector Thuli Madonsela released her “Secure in Comfort” report on security upgrades to the value of R246 million at Zuma’s Nkandla residence. Madonsela’s proposed remedial action that Zuma should pay back the state a reasonable proportion of the non-security infused a new phrase into the South African lexicon: “Pay back the money”.

At the 2015 and 2016 SONAs, the EFF interrupted proceedings and demanded that Zuma pay back the money. At the 2015 SONA, the EFF caucus was forcibly removed by parliamentary security and last year they left the House chanting before they could be muscled out.

The 2015 SONA had the additional drama of a signal jammer in the media bay that shut off communications with the outside world. The 2016 SONA saw increased police presence in the parliamentary precinct and a larger contingent of “white shirts” – as the in-house bouncers are known. Most of Zuma’s appearances in Parliament, particularly his question and answer sessions, have also been the stuff of high drama.

After conceding to the Constitutional Court that he should have implemented the Public Protector’s remedial action, Zuma eventually paid back R7.8 million to the state in September 2016. But his appearances continued to be met by hard attitudes and aggressive questioning from opposition parties.

This year’s SONA could have had less political theatre than the previous two years. Although the president is still immersed in controversy, particularly with the Public Protector’s report on state capture hovering over him and further exposing his untoward relationship with the Gupta family, at least he had the Nkandla albatross removed from his neck.

“The Economic Freedom Fighters has written a letter to the Speaker of the National Assembly to demand that instead of giving Mr Zuma an opportunity to address a Joint Sitting of Parliament on the 9th of February 2017, the date be set aside to debate:

“[1] The failure by Parliament to hold Mr Zuma to account, despite a clear ruling by the Constitutional Court that he had failed to uphold his oath of office

[2] The threat to our constitution and democracy of having Mr Zuma continue as President of the Republic of South Africa.”

Of course their demand was not acceded to. Thus began a massive security roll out to throw a ring of steel around Parliament and lockdown the Cape Town city bowl. Without much care for constitutional precepts and the separation of powers doctrine, Zuma deployed 441 members of the South African National Defence Force (SANDF) to Parliament assist the police to “maintain law and order”.

This sparked massive outrage, particularly because there was no explanation of the threat and why the SANDF was best placed to deal with it, on top of the 6,000 officers already part of the operation.

The situation was highly abnormal – even if the soldiers were present in the city centre for a few days. There was an atmosphere of uneasiness, particularly because there was no clarification about the troops’ orders and role.

By Thursday afternoon, a pall hung over Cape Town as the city emptied out by mid afternoon, and military and police vehicles lined the streets into town. Some soldiers stood on the roadside with their automatic rifles raised, pointing at imaginary enemies. Hundreds of police officers surrounded Parliament, while barbed wire cordoned off the areas.

The most ironic sight was the multitude of armed police personnel sandwiched between St Mary’s Catholic Cathedral and the Parliament of South Africa – the House of God and the home of South Africa’s democracy blockaded from public access.

The pageantry of the elaborate military parade through the city was wasted. Nobody saw it because civilians were not allowed on the streets. Television audiences could see some of the visuals but this was simply not worth the amount of money spent on the event. Zuma is afforded the great honour of taking the national salute at the front entrance to the National Assembly even though few people see him as worthy of doing so.

Because there was no outside threat to the president or the parliamentary precinct, the deployment of the soldiers was pointless. Interruptions came from inside the House – as is permissible in a democracy. EFF leaders claimed there were plans to tie them up with cable ties and inject them with lethal injections. The EFF also insisted on their demand that Parliament hold disciplinary proceedings against Zuma for violating the Constitution. The DA requested that the Speaker Baleka Mbete allow a moment’s silence for the psychiatric patients who died as a result of government negligence.

Zuma was insulted and called names, as the EFF told him how unworthy he was for the job. The ANC hurled obscenities across the House as part of their defence of the president. After more than an hour’s interruption, the EFF was muscled out. The DA then walked out and Zuma was left to drone on for an eternity with a speech that had no tangible deliverables.

Had Zuma not deployed the troops, the EFF would still have interrupted the SONA. But they might have had less sympathy for continuing to flog the issue. As it turned out, Zuma’s paranoia exposed him as an even weaker leader who can only stamp his authority through the security power of the state.

On Friday the soldiers went back to their bases and government gave no further explanation as to why they had been needed.

Is this the new normal? Troops on the streets, military parades to hail the king while civilians hide away, jackboot tactics to entrench authority?

When asked about their tactics, EFF national spokesperson Mbuyiseni Ndlozi said they would be violating their own oaths as elected representatives if they did not hold Zuma to account for his constitutional violation. He said upholders of the law could not break the law as that would make them unqualified for public office thereafter.

“As long as we have the opportunity to challenge the presidency of Mr Zuma, who is anyway an illegitimate president, we are going to do so – in Parliament,” Ndlozi said.

“We are not just a democracy based on the majority vote, majority rule only. Every law that we pass has to comply with basic set of principles that are enshrined in the Constitution.

Ndlozi said because a motion of no confidence was defeated previously, the ANC wanted to move on and behave as if everything were normal. He said Parliament had a duty to institute disciplinary proceedings against the president for violating the Constitution. Impeachment, he said, was not negotiable.

Asked whether the EFF still believed their strategy to interrupt parliamentary proceeding was effective considering the amount of times they had been assaulted, Ndlozi said: “You are asking me not to be assaulted. I am not assaulting myself.”

While the EFF was also pursuing court action on the matter, they would continue to take Zuma on in Parliament.

“We wont get tired. This is how the Nkandla matter came to be what it is.”

This means that South Africans will have to witness much more violence in Parliament and have to put up with the actions of an increasingly paranoid president. It also means coughing up funds for two more of Zuma’s SONAs – if he remains in office till the end of his term in mid 2019. These events serve no purpose and ordinary people derive no benefit from them.

Perhaps when South Africa again has a president we could be proud off and who does not need to hide behind a multitude of police and military personnel it will be worthwhile to put on the annual spectacle.

Now it is all a big farce and we should not be lulled into normalising the creeping securitisation of an open democracy. DM

Photo: A member of the South African Defence Force stands guard ahead of President Jacob Zuma’s State of the Nation Address (SONA) to a joint sitting of the National Assembly and the National Council of Provinces in Cape Town, South Africa, February 9, 2017. REUTERS/Schalk van Zuydam/Pool