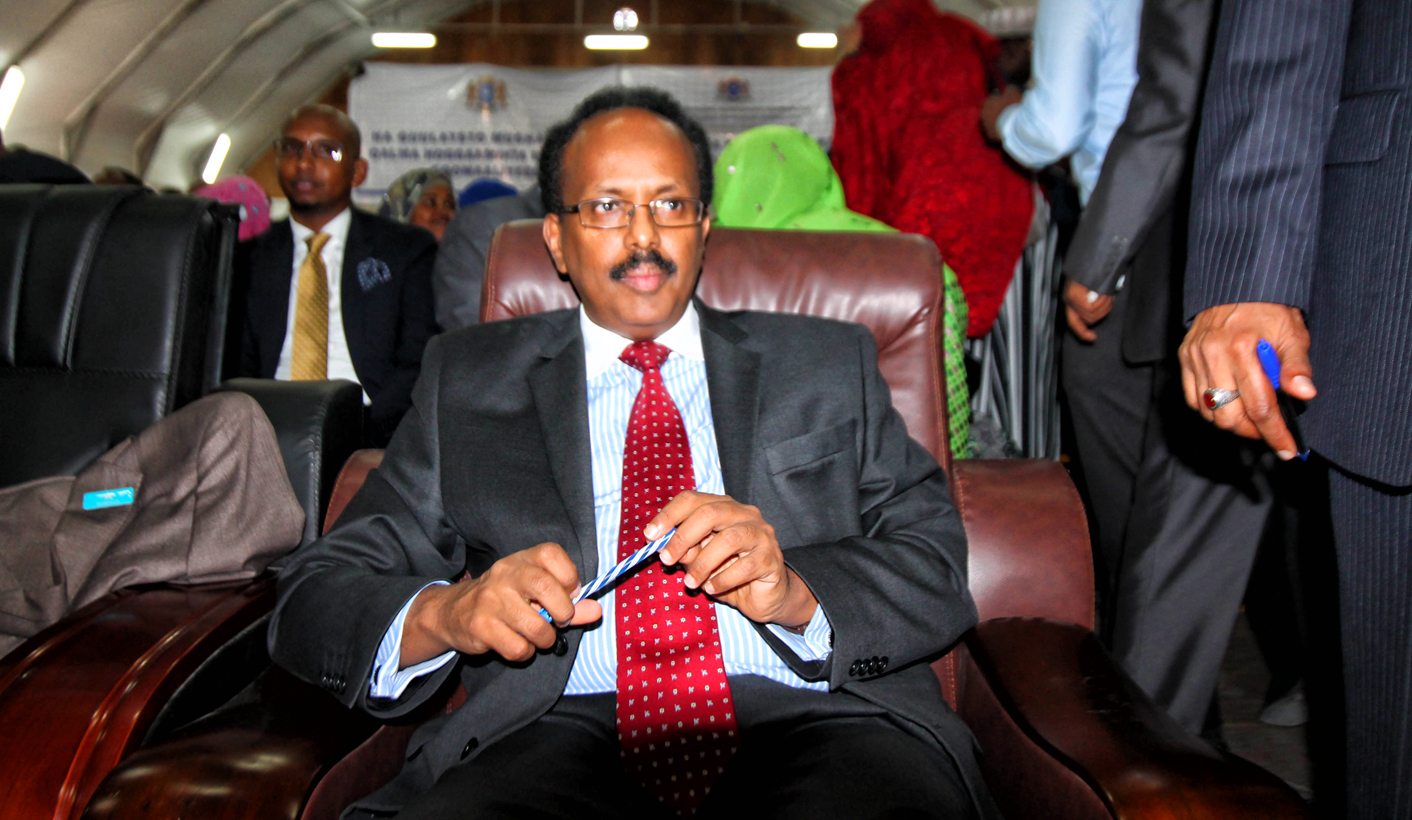 The odds, and the money, were tipped against Mohamed Abdullahi “Farmajo”. Nonetheless, the popular Somali-American academic trounced his more established rivals in Somalia’s presidential election on Wednesday, proving that even an imperfect democracy can deliver real change. By SIMON ALLISON.

It was difficult, in the run-up to the Somali presidential election, to find anyone to say nice things about the process or its chances of success.

It was fantastically corrupt, with votes being bought and sold for tens of thousands of dollars. It was barely representative, with 329 hand-picked members of parliament given the opportunity to anoint the country’s next leaders. It reinforced dangerous clan dynamics and ruling elites. It took place against the backdrop of chronic insecurity, forcing MPs to huddle under the protection of foreign troops in an aircraft hangar at Mogadishu airport as they filled in their precious ballots.

This is all true. This was not democracy as the rest of the world knows it. But that doesn’t mean it didn’t work.

“I live in the middle of the city, and I can still hear people chanting and celebrating on the streets,” said Abdihakim Ainte, a political analyst, on the phone from Mogadishu, speaking the day after the vote. Celebrations had started the night before, and hadn’t stopped. “I grew up here, and I’ve never seen this kind of jubilation before.”

In a dramatic, unexpected and popular result, Mohamed Abdullahi Mohamed on Wednesday defeated 20 other presidential candidates, including incumbent Hassan Sheikh Mohamud. It was the current president who had spent the most cash in an effort to buy his way to victory; and the challenger, Mohamed, who had spoken out loudest against this corruption.

“The outgoing president had been pumping huge money into buying MPs. He was so relentless and desperate in buying the votes, he was trying to actually buy all the MPs, and the process itself. But MPs took the money, and they turned the table on him,” said Ainte.

“It seems the MPs took the money but still voted with their conscience…Only in Somalia,” tweeted Rageh Omaar, the veteran British foreign correspondent of Somali origin.

Universally known by his nickname Farmajo – from the Italian formaggio, after his father’s love of cheese – the new president has spent much of his life in Buffalo, New York, where he worked in local government. He holds a US passport.

He is no stranger to the top echelons of power in Somalia, however. Between 2010 and 2011, he served as prime minister for just under a year, successfully shrinking a bloated cabinet and setting up a reliable payment system for the army before being ousted in a power struggle. As a result, he earned a reputation as an effective, no-nonsense administrator, and remains popular with the army, a vital constituency.

Despite the flawed process, Somalia’s election delivered a well-liked president who professes himself committed to reform and good governance.

But even with the best will in the world, Farmajo faces a nearly impossible job. Somalia remains desperately poor, and desperately insecure – in 2016, it was the most violent country in Africa, both in the number of incidents and in total fatalities. Islamist militant group al-Shabaab continues to wreak havoc, while the government is almost totally reliant for its authority on thousands of African peacekeepers. Large swathes of territory, especially Somaliland and Puntland in the north, operate as de facto independent states. Corruption is endemic at all levels of government, and seems to be getting worse as wealthy middle eastern powers jockey for influence in Mogadishu.

“Though the election doesn’t solve Somalia’s many challenges, it’s an expression of some political progress … and does highlight a vibrant electoral and political engagement,” said Ahmed Soliman, an east Africa expert at Chatham House, speaking to the Guardian. “What we are seeing is the selection of a president to take the country forward … If you look at the region, and countries such as Sudan, Ethiopia, Djibouti or Eritrea, there is a clear contrast. The election is impressive in the context.”

It’s not lost on Mogadishu residents that outgoing president Mohamud came into office four years ago on similar promises of change and reform. “When Hassan Sheikh Mohamud came, he was also welcomed with celebrations – although not to this level. There is a reason why people celebrate one president over another. It’s the hope that there will be an improvement. I understand that Somali complexities are deeper than that, that there is an institutional failure, a weak security apparatus on the ground, and the politics are a mess. But you still need that guy at the top who will guide things in the right direction,” said Ainte.

Hassan Sheikh Mohamud turned out not to be that guy. But Somalia’s elections, for all the obvious flaws, should be lauded for ensuring that there, change at the very top is possible. Now it is President Farmajo’s turn to live up to his lofty campaign promises. DM

Photo: Newly elected Somali President Mohamed Abdullahi ‘Farmajo’ Mohamed (C) after the votes where counted in the presidential election held at the international airport in Mogadishu, Somalia, 08 February 2017. Members of the upper and lower houses voted with 21 candidates for president. The war torn country is holding its first presidential elections in a quarter century. EPA/SAID YUSUF WARSAME