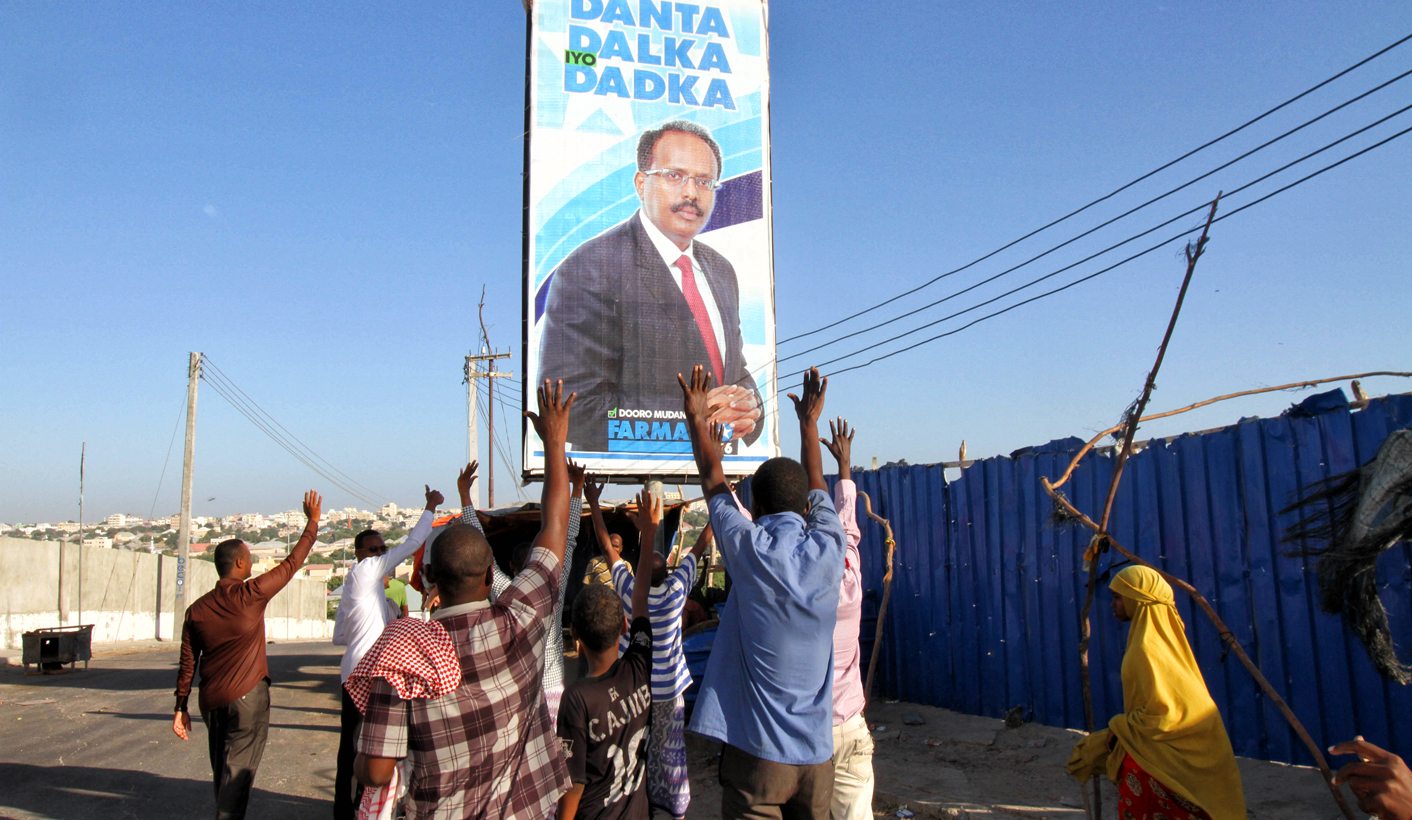 Somali’s indirect elections concluded on a positive note last Wednesday, after Parliamentarians (who are appointed by clan members and regional leaders) voted for a president.

The selection has generated significant praise, punctuated by euphoric scenes of celebratory Somalis posted on social media. This optimism is underlined by Farmajo’s reputation as a fighter against corruption, and his popular appeal stemming from a brief previous stint as prime minister.

These are important factors in an overall process that was otherwise considered highly corrupt and not overly representative.

While Farmajo’s victory puts a positive spin on Somalia’s political contest, it does not mask the faults exposed during a corrupted vote marked by electoral manipulation. The new president’s tenure may ultimately be judged by his ability to prevent a repeat situation.

In many ways, Farmajo’s shock victory is reminiscent of Hassan Mohamud’s own rise in 2012.

At the time, Mohamud was also hailed as a symbol for change. His appointment was meant to mark a departure from politics as usual, not least given his status as a political outsider with no track record of corruption; along with the credit he’d earned by not fleeing Somalia during some of its worst years.

Mohamud’s tenure was marked by big promises. His six-pillar plan laid out an ambitious agenda to address Somalia’s woes, including measures to “deter corruption at all levels of government”. Yet he quickly fell into the same pattern that afflicted Somali politicians before him – notably accusations of graft that dampened the mood following his ascension to Somalia’s top post.

In the lead-up to last week’s vote, persistent allegations linked the former president to vote-buying, connected to outside powers who had interests in continuing his rule. To his credit, however, Mohamud quickly admitted electoral defeat and pledged to support Farmajo.

It is a positive sign that alleged moneyed politics failed to sway the presidential race this time around, but it is also ironic, given that Mohamud’s own rise was facilitated this way.

Nevertheless, while Farmajo’s selection over Mohamud has been interpreted as a rejection of politics as usual – similar to what transpired in 2012 – there seemed to be a continued level of manipulation, intimidation and vote-buying in the determination of parliament.

This came despite new measures to expand the process by including electoral colleges, which was an attempt to make it harder to manipulate the vote. This slight opening, however, only led to additional opportunities for money to change hands. The anti-corruption watchdog Marqaati described this as “probably the most expensive election, per vote, in (Somalia’s) history”.

Furthermore, it is difficult to say whether this oft-delayed election succeeded in advancing institution-building, despite the creation of an Upper House of parliament.

Electoral rules appeared to be formed on an ad hoc basis by the National Leadership Forum (NLF); a grouping of top politicians that included various presidential candidates, including Mohamud himself.

The NLF’s decision-making often displayed a disregard for Somalia’s Provisional Constitution – such as an attempt to expand the Upper House from the constitutionally mandated 54 seats to 72, which was only put on hold after international pressure.

At times, the omnipotent NLF also overruled the very committees it had established to oversee and monitor the elections.

It decided, for example, to re-run only five parliamentary seats that suffered from irregularities – rather than the 11 proposed by the Indirect Electoral Dispute Resolution Mechanism. The 11 had already been whittled down from a much larger list – ignoring many legitimate cases of manipulation and fraud in the process.

This undermined electoral legitimacy, and four of the five candidates for the seats in question ended up winning the re-runs anyway – including one who had initially been disqualified for his role in instigating violence during the polls.

In this sense, widespread concern over the conduct of the parliamentary elections threatened to overshadow the selection process, until Farmajo’s candidature offered the promise of a fresh start. Other improvements also help outweigh some of the negatives, such as voting occurring outside of Mogadishu; a 275-member Lower House of Parliament that is half made up of new faces; and an increase to 24% female parliamentary representation (although this raises another issue – as it still falls short of the mandated 30% threshold).

But it is truly the selection of Farmajo that has redeemed the indirect election, in a final vote that has generated significant popular approval.

In this sense, the contest has been granted a degree of fresh legitimacy, which would not have been the case if Mohamud were re-elected, or even if another candidate with a less positive reputation had been chosen.

The postponement of a universal suffrage election to 2020 led to great disappointment. Conducting a credible vote was therefore necessary to convince a sceptical public of continued support for a fledgling political project – one which needs just enough legitimacy to secure another few years’ worth of buy-in before the system is supposed to open up for all.

Regardless of the positive dynamics surrounding his entrance, Farmajo will have a difficult task. He will have to avoid repeating his predecessor’s legacy of failing to deliver on high electoral expectations, and will furthermore have to deal with the continued threat posed by al-Shabaab.

The extremist group is a serious threat to peace and security in many parts of the country – while the African Union Mission to Somalia (Amisom) is planning a full withdrawal by 2020, leaving the country in the hands of unproven local security forces. Moreover, the Provisional Constitution must still be approved, and a number of losers that have emerged during the political process will need to have their concerns addressed, lest they become engrained spoilers. The threat of impending famine also persists; one which could affect up to half of Somalia’s population.

Farmajo will inevitably struggle to tackle all of these pressing issues, especially considering the outsized expectations he now faces. But at a minimum, his vote symbolises a fresh start and hope for a nation that could certainly use it.

Ensuring that every Somali can have their say in the next round of voting will be a good way of consolidating the progress his electoral victory seems to have ushered in. DM

Omar S Mahmood is a researcher for ISS Addis Ababa.

Photo: Supporters of newly elected President of Somalia Mohamed Abdullahi ‘Farmajo’ Mohamed celebrate in the streets after the votes where counted in the presidential election held at the international airport in Mogadishu, Somalia, 09 February 2017. Members of the upper and lower houses voted with 21 candidates for president. The wartorn country was holding its first Presidential elections in a quarter century. EPA/SAID YUSUF WARSAME