House of Cards: Phahlane heads for a showdown with IPID amid detention of a lawyer working for O’Sullivan 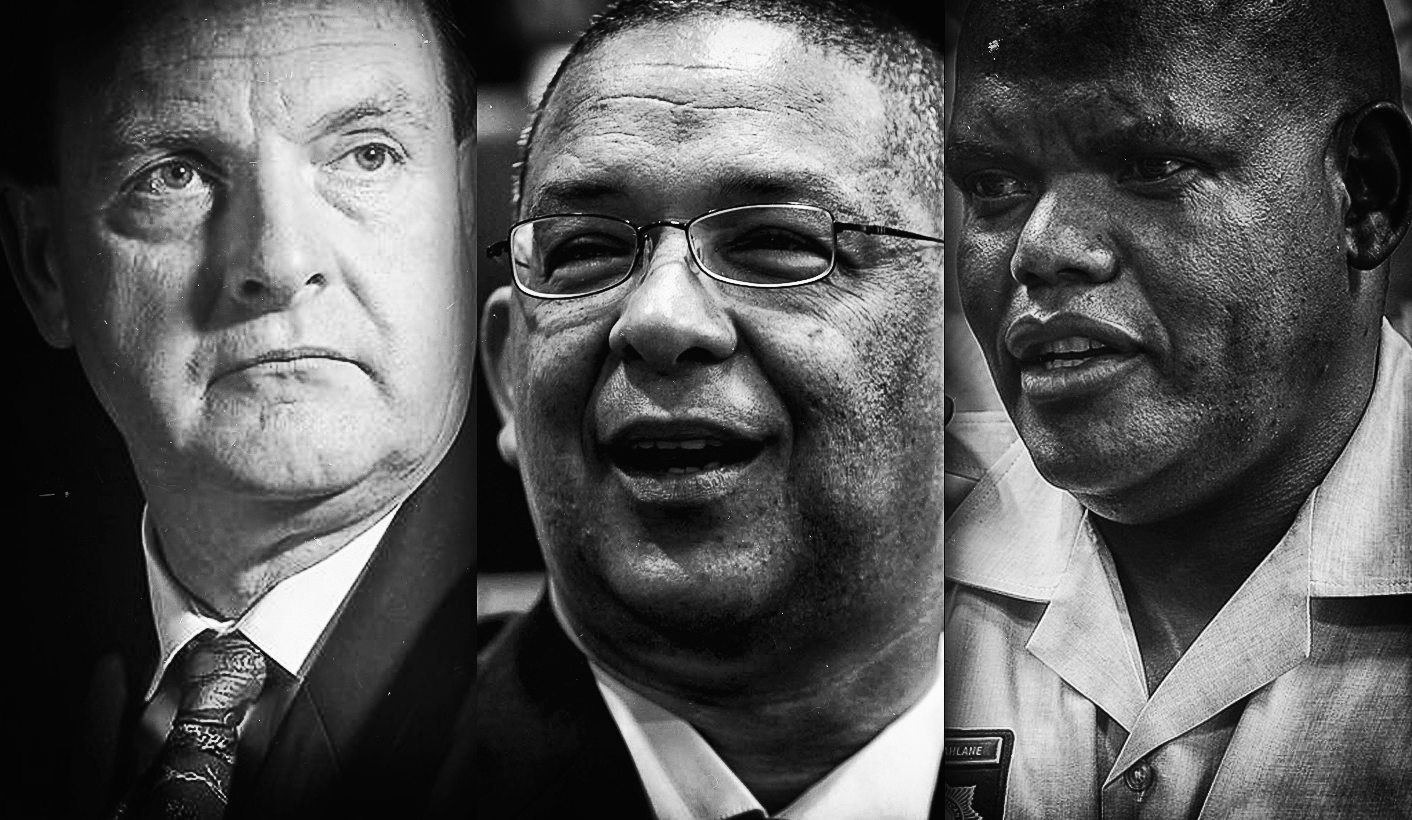 Friends and family of lawyer Sarah Jane Trent, who was detained in a police raid on forensic investigator Paul O'Sullivan’s Johannesburg home on Friday, spent the weekend trying to locate her. On Sunday night Trent’s legal team managed to secure her release after approaching the North Gauteng High Court. Trent, who was heavily guarded and driven around for an hour by police, has been accused of impersonating an IPID officer. Her arrest comes a week before IPID is due to present to Parliament’s portfolio committee on police evidence of alleged fraud in relation to acting Commissioner Phahlane’s R8-million home. The daggers are drawn. By MARIANNE THAMM.

It appears as if Mabula has been called in as a strongman by increasingly embattled acting police commissioner Lieutenant-General Kgomotso Phahlane.

The pressure is on Phahlane, who is the subject of an investigation by the Independent Police Investigative Directorate (IPID) on charges of defeating the ends of justice and possible corruption with regard to his R8-million home in the exclusive Sable Hills Waterfront Estate outside Pretoria. He mounted a fightback on Thursday, filing an application in the Gauteng High Court against IPID, O’Sullivan, his attorney Sarah Jane Trent and Magistrate JR Tsatsi in an attempt to prevent the forensic investigator from participating in the IPID investigation.

The application was made a few days after Phahlane had appeared in front of Parliament’s portfolio committee on police, flanked and supported by police Minster Nathi Nhleko, in relation to an independent forensic report on claims of mismanagement and fraud brought by police union Popcru against Phahlane in his former role as forensics divisional manager. The acting commissioner proclaimed his innocence and stated that he is a victim of a campaign aimed at undermining him.

On Wednesday, previously illegally suspended IPID head Robert McBride is set to present evidence to the police committee in relation to the directorate’s investigation into the charges against Phahlane. The scene will be set for an explosive showdown between two components of the country’s crime-fighting apparatus in front of the committee which is tasked with holding SAPS, its leadership and the minister to account.

Incidentally, the IPID investigation into Phahlane was lodged with SAPS at Kameeldrift, the same police station where Trent was eventually held over the weekend. The lawyer claims her cellphone was confiscated and she was prevented from consulting her legal team. Frantic family members and friends also spent the weekend trying to make contact with Trent and find out where she was being detained.

Trent was eventually freed late on Sunday night after an urgent application in the North Gauteng High Court. The hearing was attended by IPID boss Robert McBride.

In an affidavit Trent set out how police parked for an hour at a filling station in Marlboro, Johannesburg after her arrest while “at least seven heavily armed policemen carrying R5 semi-automatic rifles” guarded the vehicle for an hour before heading off for Pretoria and Kameeldrift.

She added that her detention was “retaliation” by senior police officials for her involvement in “the formulation of a complaint against Phahlane”.

“This is an absurd claim since it speaks that as an employee of the complainant [O’Sullivan] and an attorney, she would be giving assistance to the investigating officer of IPID upon request,” court papers stated.

Trent’s concerned family and friends only learned on Saturday that she was being detained in the holding cells at the police station east of Pretoria. Trent, who is employed by O’Sullivan, is being charged with “impersonating an IPID”. A bail hearing is set for Monday.

Trent was picked up by police on Friday after O’Sullivan’s suspicions had been aroused by a Metro police official who visited his offices asking if he was the owner of a car with a specific registration number. The vehicle, said the officer, had been involved in a hit-and-run accident. The registration number was for a vehicle O’Sullivan had used to enter the Sable Hills Waterfront Estate last year but he had co-incidentally sold it about two weeks later.

O’Sullivan, suspecting a “hit”, immediately left his property only to encounter a convoy of unmarked vehicles heading for his home. CCTV footage shows the unmarked vehicles blocking the road and an armed police officer at the gate. O’Sullivan managed to outmanoeuvre the vehicles. O’Sullivan is in possession of an order issued by the high court and obtained during a hearing on his alleged passport office, that police may only arrest him by way of a summons. The order further sets out that should police wish to arrest O’Sullivan on serious charges such as treason or espionage, they provide 48 hours notice.

Trent, who was at O’Sullivan’s offices at the time, was arrested.

Photo: A screen grab of unmarked vehicles and cops outside O’Sullivan’s home.

It is interesting to note that Major-General Mabula had been instructed by currently suspended NPA deputy national director, Nomgcobo Jiba, to arrest Nel in 2008 and who was, at the time, prosecuting National Police Commissioner, Jackie Selebi. Selebi was later convicted and sentenced to 15 years for corruption.

It was Jiba also who signed off on racketeering charges against KwaZulu-Natal Hawks head, Major-General Johan Booysen, and it was Mabula who led the team that arrested Booysen in Durban. The arrest was subsequently declared unlawful and the High Court declared the charges unlawful. In September the Pretoria High Court ordered that Jiba and commercial crimes head, Advocate Lawrence Mwrebi, both be struck off the advocates roll, a decision they have appealed.

O’Sullivan has maintained that it is “common cause” that he has been assisting IPID with the investigation into Phahlane and that there is no law preventing this.

Ntlemeza said the document made “wild accusations against senior government officials, journalists, business people and more importantly denting the image of the South African Police Service (SAPS) and the DPCI, the elite crime fighting unit which he (sic) leads.”

The Hawks head claimed that if O’Sullivan’s report “had any substance the man would have opened hundreds of dockets against the people he had pointed fingers at”.

“If Paul O’Sullivan is as learned as he claims to be together with his cabal, they should know the simple procedure of laying criminal charges here in South Africa. Their media might assist in spreading the rumours but will definitely not criminally charge anyone.”

But the strange thing is the head of the country’s elite crime fighting unit seems totally oblivious to the fact that O’Sullivan has done exactly that.

In October 2012 O’Sullivan opened case CAS 369/10/2012 at the Silverton police station, near the Hawks head offices in Pretoria, calling for the investigation and prosecution of Advocate Mrwebi, Jiba, Lieutenant-General Richard Mdluli (former Crime Intelligence boss and alleged current keeper of the keys to Zuma’s security kingdom), Prince Mokotedi (now Gauteng Hawks head), as well as several others, on charges of defeating the ends of justice, perjury and breaching Section 32 of the National Prosecuting Authority Act.

Over the years O’Sullivan has lodged at least 17 cases against several high-ranking police and NPA officials, none of which appear to have been investigated until the return of Robert Mc Bride as IPID head. McBride was illegally suspended by Minster of Police Nathi Nhleko in 2015. The case made it all the way to the Constitutional Court where the ruling was upheld, leading to a call by opposition parties for the suspension of Nhleko, one of President Zuma’s chief defenders, particularly in relation to an alternative report on Nkandla.

Nhleko, as police minster, last week told Parliament, “You have a huge foreign interest still in controlling the criminal justice system, the police being one of those… we are told directly and by proxy.”

However, as one of the most powerful men in the country, along with Minister of State Security David Mahlobo, and backed by seemingly bottomless resources, Nhleko appears powerless to expose and charge these dangerous foreign forces which threaten the country’s democracy.

In November Prresident Zuma too claimed that he was aware of who the “real thieves” were in South Africa and that he was “watching them” and “knew who they were”. When pressed to name these culprits and have them face the full might of the law, Zuma appeared unable to do so.

There are shades of Jackie Selebi in this new round of bitter and toxic rivalries that have the country’s law enforcement agencies in the grip of a political fog as factions in the ruling party come face to face with the rule of law, one of the last remaining arenas in this destructive battle that has raged for over two decades.

The IPID presentation to Parliament on Wednesday will most certainly assist in sorting out fact from the fiction while the nation watches.

Meanwhile, O’Sullivan has vowed to continue the fight even though he does not have access to the deep pockets of those who, like Phahlane, can afford the services of one of the country’s oldest, most expensive and most famous criminal legal firms, BDK. DM