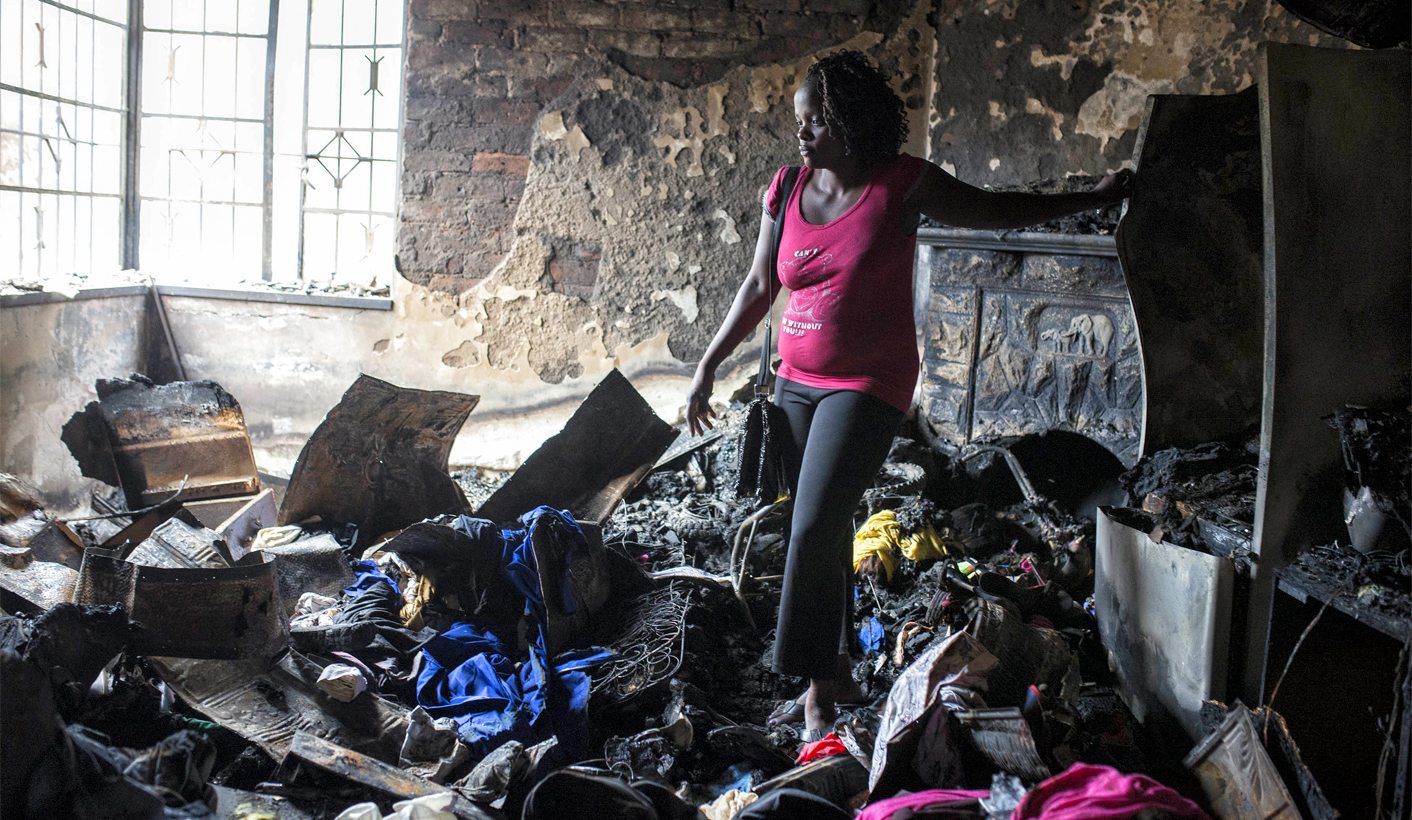 People claim they are living with drugs and prostitution so they have decided to mobilise and handle the matter themselves, forming vigilante groups. Mob justice is sweeping through the suburb. By Ihsaan Haffejee for GROUNDUP.

Elube Mwalwen, who immigrated to South Africa from Malawi, was making her way home from work when she noticed a commotion outside her home on Lawn street in Rosettenville.

“I was very confused as I did not know what was happening. People were shouting and screaming and being very violent. I saw my husband standing with our baby on the opposite street so I just went to them and watched while the house was set on fire,” said Elube.

She and her young family watched in silence as their home along with all their belongings went up in flames. The vigilantes cheered.

Her husband, 36-year-old Albert Mwanza, works as a mechanic. He was in the house sleeping when he was woken by the noise of the approaching vigilantes.

“When I went outside to see what was happening I was beaten by some men. They were saying I am a Nigerian and I’m selling drugs,” he said.

Albert’s attackers started fighting amongst themselves when one of them recognised that he was from Malawi and attempted to stop the others from beating him. Albert took advantage of the confusion to slip away and grab his 18-month-old son Brian, before fleeing into the street.

With the house on fire, the vigilantes proceeded to loot the Ethiopian-owned tuck shop next door.

“The shop owner locked the shutter and ran for his life when he saw these people coming,” said Anderson Mapata, a neighbour who witnessed the incident. “They smashed the shutter and took everything very quickly. Even the fridges were stolen. The police were just watching, but there were too many people, maybe hundreds.”

Elube and Albert rented a room in the home that was torched. They shared the house with other immigrants from Zimbabwe and Mozambique. The house is owned by a Nigerian man who said his name was Michael Steven. The property was divided into two houses, the Ethiopian tuck shop and a bottle store run by Steven. Locals claim that it’s from this bottle store that drugs are being sold in the community and that is why this property was targeted as part of the mob justice sweeping through the suburb. (GroundUp has not been able to verify this claim.)

Elube came to South Africa from Lilongwe four years ago. She works at a car wash nearby six days a week. “I leave home at six in the morning and I return at seven in the evening, working very hard every day. I am the one trying to look after the family, and to lose everything like this is very, very painful. We did not manage to save anything. The clothes I have on now is all I have,” she said.

The family also lost their passports and the birth certificate of their child in the fire. “If I have to go to the clinic to get my child immunised they will ask for a birth certificate and I don’t have that so my baby will suffer. Also the police will be harassing me. Now that I have no documentation, they will want to arrest me. So now I am living in fear.”

“Tonight I do not know where we will go. I will most likely have to spend another night in the streets with my wife and child unless I can get some money and find a room to rent,” said Albert while cradling young Brian in his arms.

Down the road from this incident, another home was burnt by the mob. This one was claimed to be a brothel also run by Nigerians.

Two young South African men live next door to the alleged brothel with their families. “Honestly, we are happy about how the community is dealing with this drugs and prostitution thing. We both have kids and when we step outside our homes we are confronted by prostitutes and guys selling drugs on every corner. This is not a good environment for our kids,” said one of them, who did not want to be named. “The police do nothing so the people have decided to mobilise and handle the matter themselves.”

Photo: Elube Mwalwen and young child Brian walked the streets of Rosettenville looking for a place to stay for the night after their home was torched during a vigilante attack. Photo: Ihsaan Haffejee

The community of Rosettenville has been hit by violence during this past week as residents claim their community is being overrun by drugs and prostitution. According to police about ten houses, which residents claim are used by drug lords, were torched. Police spokesman Kay Makhubela says that police will maintain their heavy presence in the area until calm is restored. DM

Main photo: Elube Mwalwen surveys the damage done to the room which she rents in the house which was set alight during a vigilante attack. Photo: Ihsaan Haffejee