Beret the hatchet: The #SONA2017 Quotathon 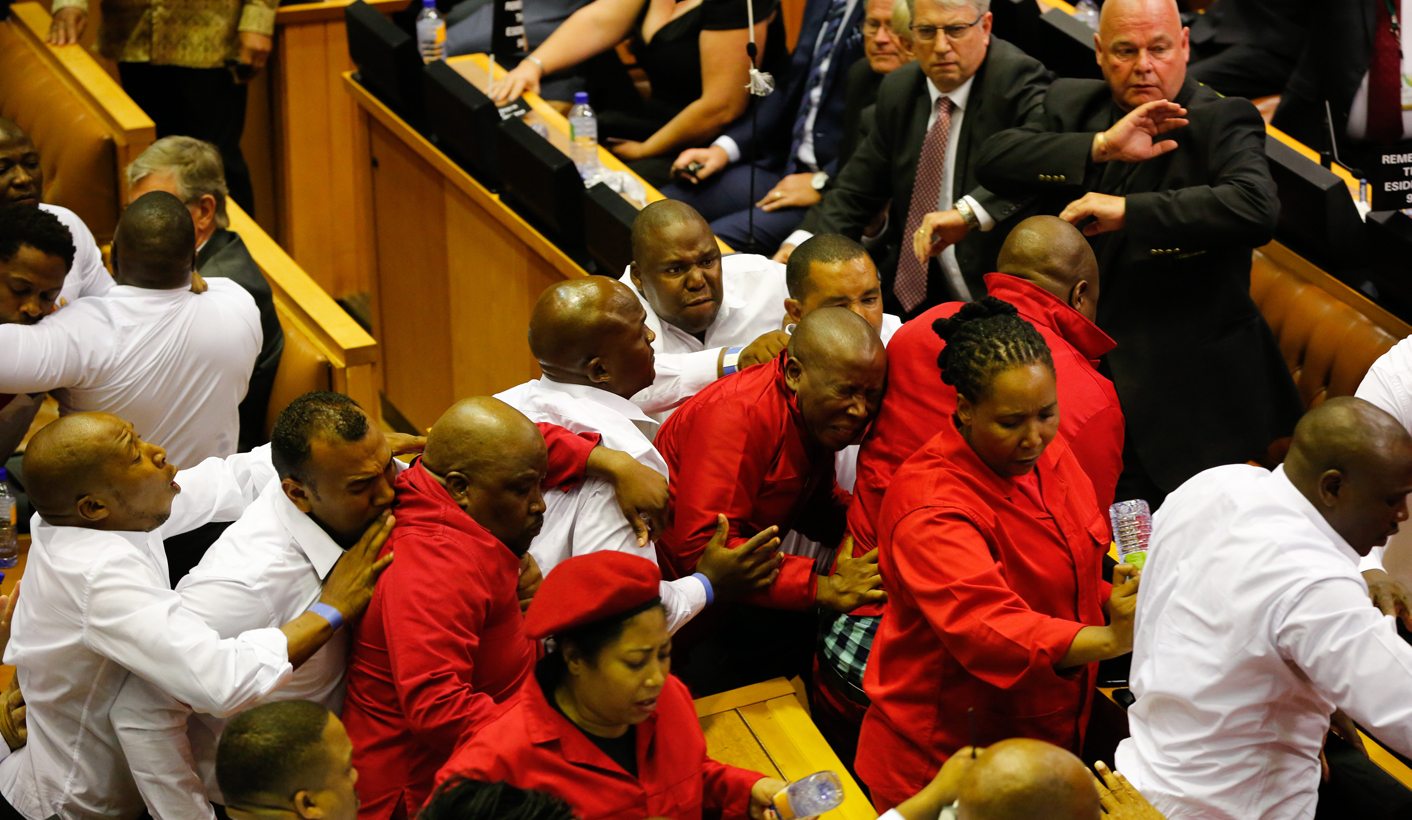 In some ways, it was Groundhog Day SA: previous SONAs on repeat, but now with even more added violence and drama. MARELISE VAN DER MERWE rounded up some of the most memorable insults, promises and explanations from the lead-up, the event, and its inevitable aftermath.

If you don’t have anything nice to say, say it in Parliament

Sitting in front of us is an incorrigible man, rotten to the core. He must address the nation from prison. – Julius Malema, EFF

Your conduct has failed you to be a candidate for president because you are irrational, you are impatient, you are partisan. – Malema to Speaker Baleka Mbete

This man has broken South Africa. You are breaking Parliament… This is a complete disgrace. – John Steenhuisen (DA) to Mbete

He used you. He promised you [that] you were going to be a president, you went home and slaughtered a cow, and he dumped you. He dumped you! – Malema to Mbete

In English it is called a scoundrel. In our mother tongue it’s called imenemene. We cannot hold lemenemene as a role model. – Mosiuoa Lekota, COPE

441 soldiers will not protect you. Your problem is not outside, it’s inside! Here. – Malema

Well, that was a bit of an EFF-up

The rules of Parliament are informed by what we understand to be convention, preceded [by] what is in the law and what is the Constitution, so I think the president can rest easy. South Africa can rest easy. We will be confining ourselves to what is doable in the rules. – Modise prior to SONA, in response to concerns that the EFF would disrupt the President’s address

We will assist you to go. – Mbete to Malema

This strategy is the one that is going to win us votes in 2019 to remove the ANC. A kleptocracy must be removed from government and you don’t do it by giving it red roses. You remove it through the programme of action that will win society over and expose the shenanigans of this kleptocracy. – Malema after the SONA

It is the most important date on the political calendar… The nation is always eager to know that government is at the top of the game. – Mbete on SONA, prior to the event

Some of the issues are at operational level and therefore they are not issues that the presiding officers in detail would be able to say this is what happens in this minute. – Mbete in response to a question on process for the public order policing unit. Wait, say that again slowly?

But will he pay back Maimane?

The 2016 election results represented a deep political shift in South Africa, where the message of change through the ballot box was received and endorsed by people across the country. – Mmusi Maimane, while outlining the DA’s plans leading up to 2019

We are seeking to go to court to obtain an order that the deployment of soldiers for non-ceremonial purposes was unlawful and unconstitutional. – James Selfe (DA), ahead of the SONA. The party is sticking to its guns thus far.

Two more of these SONAs. It’s going to be a nightmare. – Maimane

Something is rotten in the kingdom…

[I]t’s completely not business as usual. We’ve been given an assurance by the Speaker and the chairperson that these military people will not be allowed on the parliamentary precinct at all. They said they didn’t request the military to come; it’s something the president has done‚ [and] they don’t know why the president has deployed so many people. – Steenhuisen, ahead of SONA

I want to assure South Africans‚ here there is no abuse of state power. [Soldiers will not be at Parliament but stationed nearby] ….on standby in the event a calamity would occur. – Defence Minister Nosiviwe Mapisa-Nqakula, ahead of SONA

There was no calamity. – Mapisa-Nqakula speaking to journalists after the SONA

Honourable member, that was not a point of order. – Mbete attempts (unsuccessfully) to interrupt Lekota’s ‘imenemene’ moment

It was pepper spray. – NCOP Chairperson Thandi Modise on the substance that was released inside the National Assembly, in response to the DA’s allegation of tear gas. Modise later promised an investigation into the incident.

The ANC has not disrupted Parliament. Not once now it can be the responsibility of the ANC to deal with what is happening in Parliament. – Gwede Mantashe, ANC

[T]he presiding officers allowed it to go on too long. They should have cut it within 10 to 15 minutes and that’s it. – Mantashe

[Secretary to Parliament Gengezi Mgidlana] has since established an interdivisional committee to investigate various allegations around the incidents that took place during the night during SONA. They’re expected to table a report early next week to presiding officers… They are saying the allegations [of brutality by protection officers] are unfair and baseless. We have been provided with footage as evidence which was broadcast on television stations. – Parliamentary spokesperson Manelisi Wolela

Eight officials of the Parliamentary Protection Services (PPS) injured while escorting some Members of Parliament out of the chamber are receiving medical and counselling services. The officials were beaten with plastic hats, bricks, and punched. – Media statement from Parliament

Hon. Ndlozi has just told me that I should consider moving from this chair as it might get rough here. Now I don’t know where to go. – Mangosuthu Buthelezi, IFP

We are prepared to leave this Parliament in a coffin. We won’t be intimidated by soldiers and police who are protecting that constitutional delinquent. – Malema

F**k you, man! – Unknown contributor at Steenhuisen during Parliamentary punch-up

You are a racist and a sellout! – Unknown contributor during abovementioned Parliamentary punch-up

Baleka Mbete is confused ngempela. I think Bafana Banafa must give her a call – they need a defender like her. – On Ndlozi’s Facebook page (comment by Lawrence Stemela)

You can kill me. It’s fine, kill me. There’s no problem. Kill me. – Malema, seconds after miming a slit throat – running a finger across his neck – to an unknown adversary across the room

… And we don’t have words for this one, so if you haven’t seen it, treat yourself to the sign language interpreter’s moment of panic at having to translate ‘fuck you’.

Makes you think, doesn’t it?

It is interesting to note that the R3,500/month minimum wage translates into annual income of R42,000. That figure is the current maximum income ceiling for parents to qualify for child support grants. This seemingly suggests that, if the minimum wage was implemented today, many employed workers subject to the R3,500/month minimum wage would no longer qualify to receive child support grants. There is currently no clarity from the government’s side on this issue. – From the KPMG analysis of SONA 2017

Nkwankwa‚ a real leader. A leader amongst leaders. – Khaya Dlanga on Nqabayomzi Nkwankwa’s ability to stay cool during the chaos

I’m no fan of [Jacob] Zuma but I must say I felt for the Speaker. It was not unlike being in a room full of toddlers. – Anonymous mother, who did indeed have a toddler

What is more shocking than Malema’s misogyny is the silence, inside and outside the EFF, by women who call themselves feminists… right to dignity cannot be reserved for those we like, especially in South Africa, with so much gender abuse. – Advocate Christine Qunta on Twitter

We would like to deeply apologise for the previous retweet. It was a mistake. We reiterate that any form of violence is unacceptable. – @GovernmentZA after retweeting a picture of a clearly pained Julius Malema, where Malema describes having his genitals squeezed by the pictured security officer. The retweet’s caption: “Hahahahaha.”

Christ, what a wretched, hollowed-out shell of a man he is. Laughing emptily as his grubby little kingdom turns to shit around him. – Tweet by writer Tom Eaton

They’re wearing your taxes, darlings. – Eaton, in response to repeated media queries on what politicians are wearing

From the mouth of Baba

Peace with who? – Zuma in response to suggestions that he step down for the sake of peace.