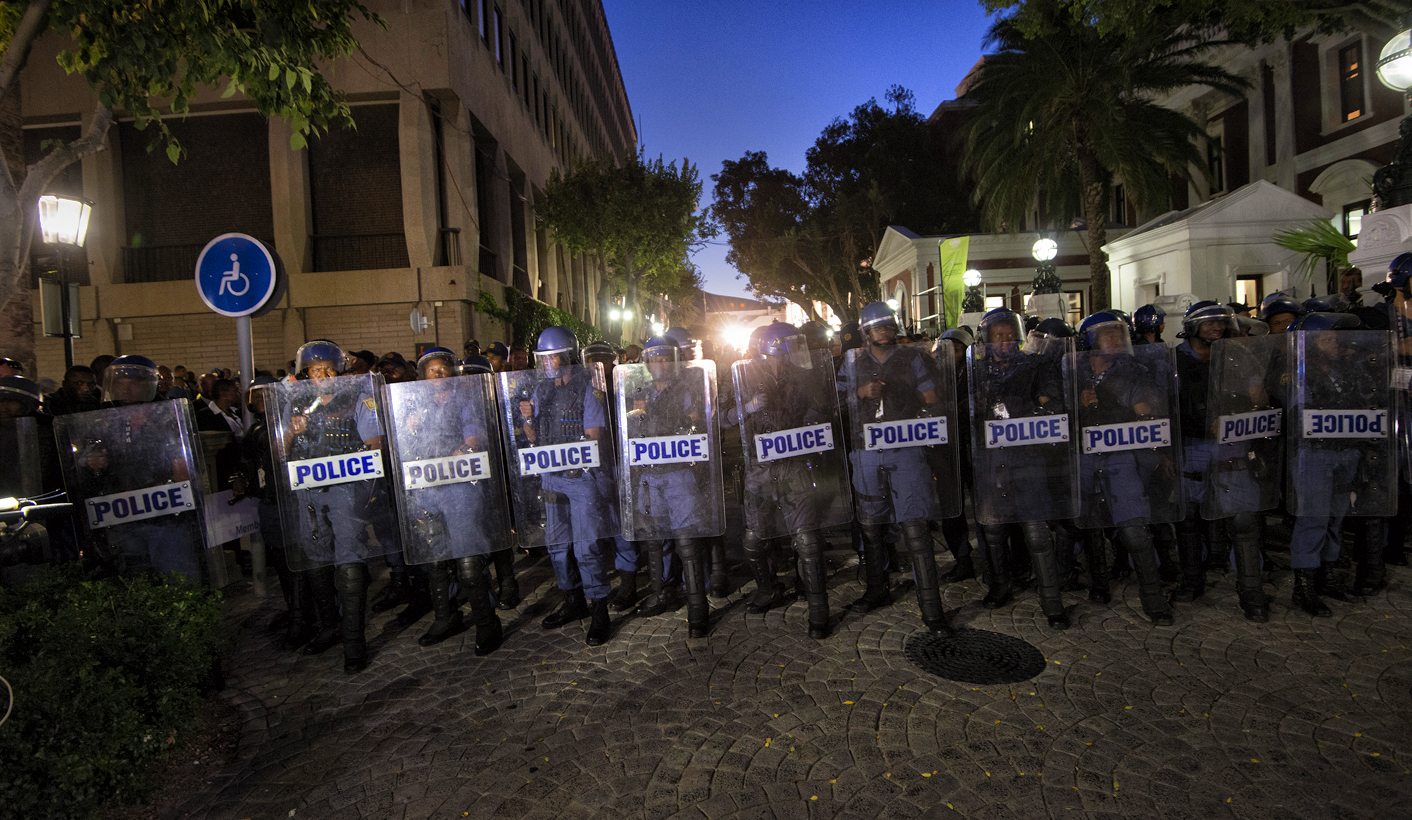 Every South African’s constitutional rights are eroded as the abnormal is normalised. In the post-truth, alternate fact world, those who hold power in state or in a faction representing certain interests, muster resources to back their preferred narrative as reality goes down the rabbit hole. By MARIANNE MERTEN.

The ease by which police in riot gear have been called to Parliament over the past three years to act against MPs, unionised parliamentary staff or student protesters must not ever be considered normal.

That police stood guard at the State of the Nation (SONA) red carpet fashion moment is not normal. Nor is it normal that much of central Cape Town turned ghost town for military marching bands that ticked off the ceremonial aspects of SONA in their performance to no one really except deployed security personnel.

The abnormal is made normal. Space is given to those who believe that if a lie is told often enough it will become the truth. Perception, not fact or doing the right thing, trumps all.

And so Parliament continues to maintain that nothing different was done at SONA 2017, even if photos of military police armed with R4 rifles emerged alongside visuals of police in body armour, riot shields and helmets strategically blocking off areas in the parliamentary precinct. Publicly available footage clearly shows journalists impeded despite Parliament’s official assurances over several days that this would not happen.

What unfolded at SONA 2017 happened with the approval of National Assembly Speaker Baleka Mbete and National Council of Provinces (NCOP) chairperson Thandi Modise. By law the presiding officers are in control of the parliamentary precinct. Only under their authority may security services – whether the SAPS, State Security Agency (SSA) and South African National Defence Force (SANDF) – be on the precinct.

This provision of the 2004 Powers, Privileges and Immunities of Parliament and Provincial Legislatures Act is so strictly enforced that, for example, it delayed the serving of court documents in a Labour Court case brought by the Parliamentary Protection Service against the hiring of ex-SAPS members at better working conditions in early 2016. It took over a week before the court documents could be served to Parliament’s legal services division because Mbete had been unavailable to sign off on this in early January. The approval under Parliament’s letterhead, seen by Daily Maverick, gave specific directions as to where to deliver the court papers.

It’s not a surprise, necessarily.

The people’s House, styled as the venue for debate of national issues, is steeped in a toxic mix of the governing ANC’s factional battles, its hardline attitudes to elected representatives from other parties and obsequience to a parliamentary box-ticking protocol.

Long accustomed to getting its way on the back of its majority, the ANC battles against the EFF’s noisy assertion that the self-styled leader of society, the ANC, was not the only choice to represent South Africans. Efforts to find a multiparty political solution to restore calm to the national legislature some two years ago fell apart. As the DA flip-flopped, the ANC politician who drove the process, Deputy President Cyril Ramaphosa, was castigated by party colleagues.

In the wake of Thursday’s SONA 2017 brutality, the ANC touted political kragdadigheid in the wake of securocatisation and the turn to “law and order”, away from “safety and security” as deliberately adopted in the 1994 transition to democracy.

“The people of South Africa must rise up and speak out against this rampant anarchy and protect their public institutions,” said the ANC parliamentary caucus as it styled the EFF as threatening South Africa’s liberty and the DA as opportunistic. Meanwhile, the behaviour by ANC MPs, including ministers, who shouted “racist”, “sell-out” and “fuck you” – all long declared unparliamentary language – during the violent mêlée would be “discussed” in caucus.

It is a post-truth, post-consequence, alternate fact world where populist demagoguery holds sway. And the abnormal is made normal in a political landscape where numbers are equated with power.

And so Parliament frequently falls short of its constitutional duty that it must, according to Section 55(2) of the Constitution, “ensure that all executive organs of state in the national sphere of government are accountable to it; and to maintain oversight of the exercise of national executive authority, including the implementation of legislation, and any organ of state”.

This, Parliament has not done when it pursued a convoluted process cloaked in selective use of parliamentary protocol and rules, that ultimately on the back of the ANC majority absolved President Jacob Zuma from any repayment in the Nkandla scandal as the swimming pool was a fire pool, as were the cattle kraal and chicken coop.

The Constitutional Court in March 2016 found that the National Assembly contravened the Constitution by adopting this resolution, which was declared unconstitutional and invalid. The unanimous judgment also reminded Parliament of its constitutional responsibilities, not only as “watchdog over state resources” and its “pre-eminently unique role of holding the executive accountable”, but also as “the embodiment of the centuries-old dreams and legitimate aspirations of all our people”.

“It (Parliament) is the voice of all South Africans, especially the poor, the voiceless and the least-remembered… In sum, Parliament is the mouthpiece, the eyes and the service-delivery-ensuring machinery of the people. No doubt, it is an irreplaceable feature of good governance in South Africa,” said the Constitutional Court.

Almost a year later, however, Parliament and its ANC MPs appeared tone deaf amid party-politicking and parliamentary tick-box protocols. The issue? A moment of silence, before the presidential speech of SONA 2017, for the 94 psychiatric patients who died in Gauteng.

Mbete dismissed the DA request for the moment of silence as the only order of the Thursday was the presidential SONA, saying it could be accommodated during this week’s SONA debate. Subsequently the ANC parliamentary caucus described the DA’s request as “opportunistic” and against parliamentary protocol as it was sprung on the presiding officers. If the DA had only consulted, the ANC most likely would have agreed to the moment of silence.

Health Minister Aaron Motsoaledi already had requested to make a statement to the House on this, the ANC in Parliament said on Friday. And again what is being normalised is Parliament’s lack of exercise of its constitutional responsibilities of oversight and holding the executive to account.

In line with Parliament’s constitutional responsibilities, National Assembly Rule 201.1.c allows committees to “monitor, investigate, enquire into and make recommendations” on a wide range of areas in executive organs of state, effectively departments and ministries, constitutional bodies “or other body or institution”, including “the legislative programme, budgets, rationalisation, restructuring, functioning, organisation, structure, staff and policies”.

But MPs follow a parliamentary tick-box protocol: only matters specifically and officially referred to them can expect action. Like the official report on the Life Esidimeni tragedy, MPs have not dealt for years with others on, for example, access to dignified sanitation, clean water and other issues central to a better life for all, often produced by constitutionally established institutions to support democracy, such as the South African Human Rights Commission.

There is nothing in the parliamentary rules preventing the elected people’s representatives from being proactive. The report by Health Ombudsman Dr Malegapuru Makgoba is available on the ombud’s official website.

On February 7 the National Assembly health committee in a statement said it would “request the Minister of Health… to officially table the report into circumstances surrounding the deaths of mentally ill patients in the Gauteng province.

On February 1 the committee issued a statement saying: “We are saddened and horrified by the horrific report and we urge the Minister of Health to ensure appropriate actions are taken and the recommendations are fully implemented as a matter of urgency.”

As never before, this year there is a crucial urgency for facts to rise from the political noise and blame shifting, the increasingly free reign of security services, whether at Parliament or elsewhere, and the massaging of protocol to trump legal and constitutional responsibilities.

The abnormal cannot be allowed to be the normal. DM