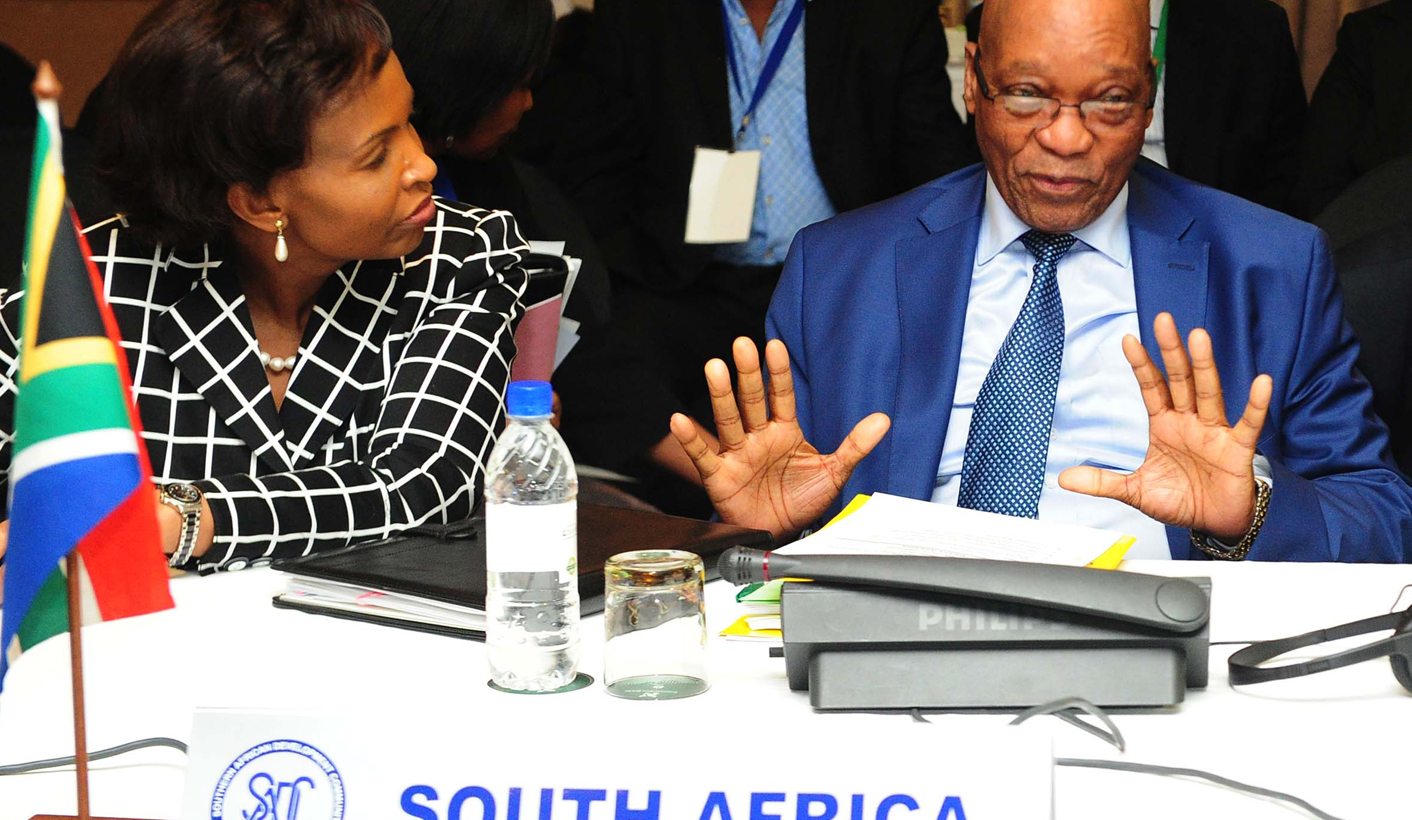 In which J. BROOKS SPECTOR waits in vain for any mentions of foreign affairs in the life of South Africa and its government, as seen through the lens of President Jacob Zuma’s latest State of the Nation speech.

All the usual disruptions: the marching bands, those totally ridiculous matric dance dresses, the way over-the-top motorcades, the waiting riot police units, those interminable cries of points of order came and – after some loud, and seemingly interminable angry bickering – went. A DA call for a moment of silence for all those deaths by the 94 mentally ill patients was ruled out of order. And there were the usual waiters with their assigned task of dragging those red-jacketed MPs from the chamber. Increasingly like those memorable parliamentary brawls in South Korea and Taiwan, there was a lot of kung fu fighting and it was a little bit frightening, especially given that there was the element of police and security guards added into the mix. And then DA representatives and others walked out as well, leaving the room in the hands of a rather desultory ANC cheering claque.

All this sturm und drang was accompanied by a new charge – the possibility that the police were prepared to use biological weapons against disruptive Members of Parliament. Democracy, increasingly, is something that in its practice in South Africa, in the same way as imperial German Chancellor Otto von Bismarck had famously observed about the messy similarity between sausage making and diplomacy, probably should not be watched by those with weak stomachs – or short attention spans.

After watching over an hour of this, one almost began to feel a bit of sympathy for the two co-presiding officers, Baleka Mbete and Thandi Modise. Almost. This messy demonstration seemed reminiscent of an unruly gaggle of argumentative pre-teens in a particularly unruly model UN, more than the nation’s pre-eminent deliberative body.

And eventually, after lots of shouting and screaming, finally, at 20:21, the president rose to deliver a ponderous, formulaic, largely pedestrian address. Yawn. Lots of strong coffee was made and drunk in our house. (Embarrassing if we fell asleep while watching it at home and missed something important.)

Waiting for some recognition of the country’s foreign policy challenges in this SONA was a mug’s game, of course. There were numerous descriptions of great successes achieved on the basis of the nine-point plan, and greater plans for greater victories yet to come. There was the usual strangely paced delivery. (Can no one in the Union Buildings write a speech that actually suits the speaking style of this man who, instead, must trudge his way through the oratorical sludge he is given each year to read?) The whole thing probably was not very good for generating real foreign confidence in South Africa’s political stability and as a serious place for any new foreign direct investment.

One has to ask: why does the country go through this charade every year, over and over, again and again? Television reruns of old episodes of Law and Order had become increasingly tempting after an hour’s worth of points of order had come and gone. Steady, boy. Don’t give in to despair too easily. At least the sign language guy visible in the bottom right corner of the broadcast was entertaining – especially when he smacked his forehead with the palm of his hand when he gave up trying to interpret the proceedings.

Right, still waiting for a mention of foreign policy challenges. And waiting. No, just a minute. There was something. There was a brief mention of a bilateral agreement with China that is to build a highway. And some positive words about international science co-operation via the Square Kilometre Array radio telescope. And foreign tourism is rising.

Then it was time to move on to national priorities for the future. Economic emancipation matters, and the president did a reach back to the late Oliver Tambo’s words on this point – on the hundredth anniversary of his birth. And there were words about the need for radical social and economic transformation, as well as new regulations encouraging further BBBEE, and especially regarding state procurement in infrastructure programmes. (But no applause by the finance minister at that precise moment, interestingly.) But there was not a word of encouraging language here for “the rising economic growth tide floats all boats” theory bunch, let alone any bones being tossed to foreign business’ role in development either.

There was also the usual scolding about the over-concentration of ownership and control in the economy, that the government will speed up the issuance of title deeds, and do more to encourage more black entrepreneurs. Aha, mining is important too, but the new mining charter is being reviewed to improve it.

Ah, the land question needs a serious resolution too. The “expropriation of land” bill is going to get a further review by Parliament. And there was a shoutout to a prize-winning black female farmer – and she garnered more applause than anything the president said. Rising university costs are a tremendous strain on the poor as well, and so loan programmes and some government spending efforts are growing. Thus the long and short of radical economic transformation.

Still waiting, though, for a nuanced, serious exploration of the country’s place in the international system and the nation’s challenges. Or even a passing mention of it.

Meanwhile, we learned that the president is against crime – and so the police will work harder and better in dealing with this plague. The government is pleased rhino poaching is declining. And recidivism must be brought down. The number of children in the criminal justice system is being brought down. And there are more courts and the prosecuting offices are working hard. (Who writes this stuff?)

Ah, finally. Thus cometh the obligatory foreign policy laundry list. Tambo is the touchstone here, too, as Zuma cites the late leader to the effect that this country seeks to live in peace with all its neighbours, and the president is pleased South Africa will chair SADC, and it will push an economic and trade integration agenda. And South Africa is proud of its role in African peacekeeping, too. It will work with the US for the full implementation of AGOA (Eh? That doesn’t sound quite right. AGOA is not a trade treaty, as readers of this website have learned in exhaustive detail), and South Africa is happy to support the “one China” policy. Almost all South African products will enter the EU duty-free, and co-operative arrangements such as the BRICS bank, a BRICS rating agency, and various agricultural agreements are becoming more important.

South Africa continues to support UN reform, but Israel’s continuing occupation and new settlements on the West Bank undermine the possibility of achieving the two-state solution, even as Morocco’s readmission into the AU should help lead to a solution of the Western Sahara dispute. And that’s it as far as any discussion of the nation’s place in the world.

With a shoutout of support for albino rights, and condolences for a roster of cultural and sports figures who have passed away in recent months, the speech came to an end. However, the joint parliamentary sitting ended only after Thandi Modise apologised for the use of pepper spray outside the chamber.

In sum, not much to cheer about, and not much cheering either. Sigh. Yet another missed opportunity to inspire a nervous nation. DM

Ninety One • 5 hours ago