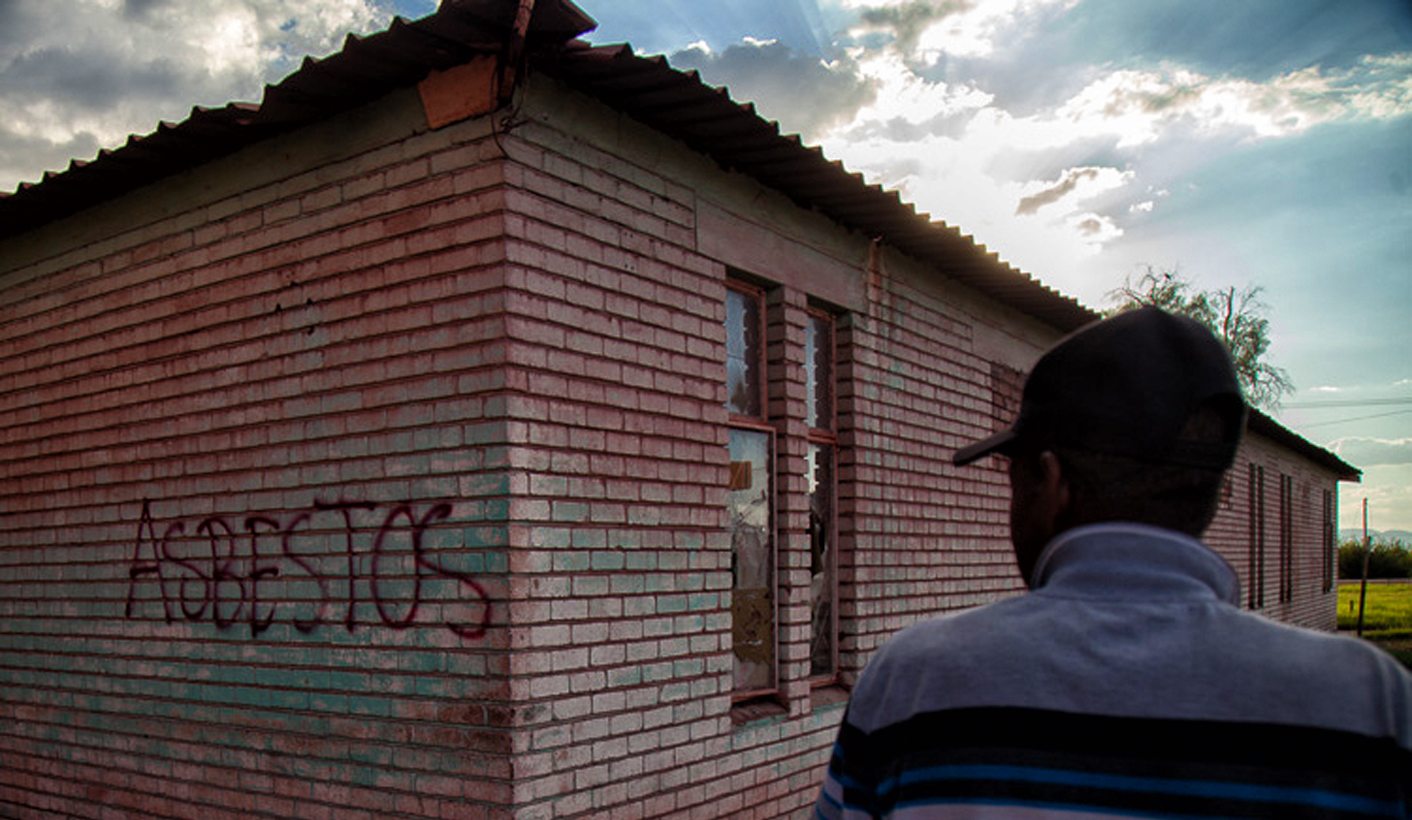 The Kumba Iron Ore company is taking residents of Dingleton to court for R1.6-million over claims that they disrupted a rehabilitation process.By Ashleigh Furlong for GROUNDUP.

Kumba Iron Ore is demanding more than R1.6 million from a group of residents of the Northern Cape town of Dingleton after a battle over asbestos.

Kumba says the residents disrupted the process of rehabilitation of a site near a railway where blue asbestos was spilled years ago. The company needs to rehabilitate the site in order to expand its Sishen iron ore mine near Dingleton.

Last September some of the Dingleton residents, accompanied by the police, went to the site of the work and voiced their anger that rehabilitation was being carried out while they were still living in the town.

They said rehabilitation workers were wearing “space suits” while the residents walked around without protection. When asbestos is disturbed, fibres are released into the air. If inhaled, this can cause asbestosis, lung cancer, and mesothelioma, a cancer of the lining of the lung.

“You cannot rehabilitate, remove or disturb the asbestos while there are still people living here,” said Nick Visagie, one of the remaining residents.

Kumba is also relocating the entire town of Dingleton. Only 25 families remain and are refusing to move on Kumba’s terms.

Kumba now wants the court to order the residents to pay R1.6-million to cover the costs that the mine incurred while the rehabilitation was on hold. (Kumba’s summons cites five people, but some of the court papers refer to six.)

The presence of blue asbestos in the Dingleton area is a result of spillage that occurred years ago when asbestos was still mined in the Northern Cape and was transported by railway. While the spillage was not caused by Kumba, the mining company is responsible for the rehabilitation as it needs the area to expand the Sishen mine.

Photo: Blue asbestos lies on the ground in Dingleton.

Jacob Rooiland believes that Kumba’s demand for R1.6-million is an attempt to force the residents to move from the town. “(Kumba) knows we don’t have the money. They are actually after our property,” says Rooiland.

Victor Gorrah, another resident of Dingleton, states in his affidavit that they object to the rehabilitation as “it poses a threat to the health of the community”.

All the residents insist that they were peaceful when they engaged with the rehabilitation company.

Asbestos is a carcinogen and occurs naturally in the environment. It was used in the manufacturing of many common goods until the dangers associated with its use were discovered. Blue asbestos is one of the most dangerous forms of asbestos.

George Maluleke, a general manager for projects at Kumba, explained to GroundUp that an independent company had been commissioned to inspect the manner in which the rehabilitation was conducted. Kumba had applied for permission from the Department of Labour and this was granted. He said “monitoring points” had been set up to assess asbestos spillage as the rehabilitation was carried out.

Maluleke said when the company that was to conduct the rehabilitation began to work, some members of the Dingleton community demonstrated, stopping the work, and “threatened to attack security guys as well”.

Kumba is now trying to recover the costs incurred for every day that the company could not carry out its work. In addition, Kumba wants those who caused the disruption to pay the costs of the lawsuit.

In the High Court summons, Sishen Iron Ore, a subsidiary of Kumba, says that from September 2016 the defendants threatened to damage equipment and machinery, harassed and intimidated employees and removed barricades from the area.

When GroundUp visited Dingleton the rehabilitation process appeared to be continuing and the area was demarcated with a sign reading “Danger Warning Asbestos”.

GroundUp also saw blue asbestos in another section of the town, far from where the rehabilitation was taking place. This asbestos was clearly visible above the ground. It is not clear how this asbestos ended up so far from the railway line where it is meant to have originally spilled.

The case is set to be heard in the Kimberley High Court later this year, where the residents will be represented by Richard Spoor Attorneys. DM

Photo: Some abandoned houses in Dingleton have ‘asbestos’ spray-painted on them. It’s unclear why. (All photos by Ashraf Hendricks.)