Selective prosecutions: For NPA, some cases are more equal than others 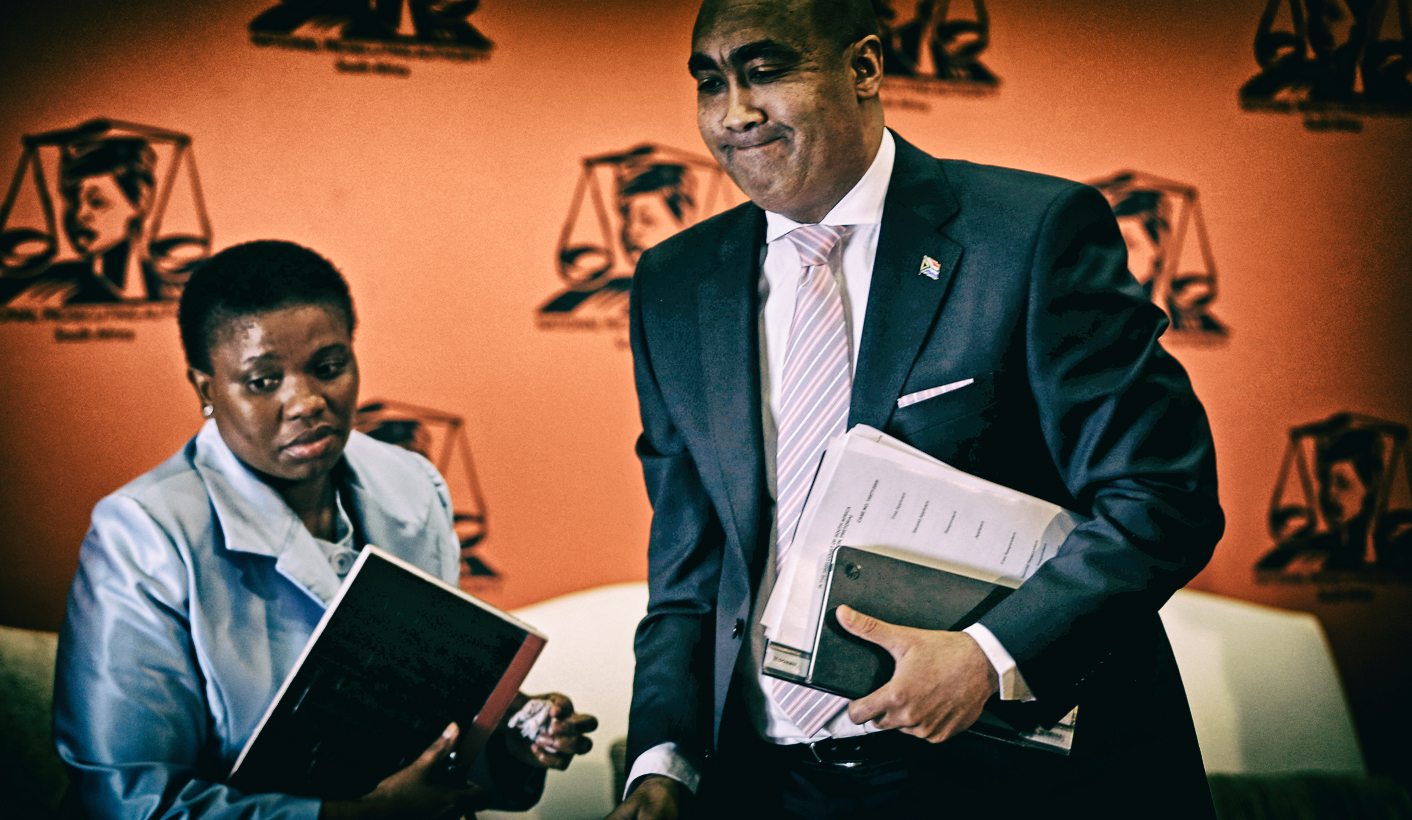 Resigning from the NPA in January to join a new private prosecutions unit established by Afriforum, prosecutor Gerrie Nel cited the perception that the NPA is selective in its prosecutorial decisions. Nel’s charge follows NPA head Shaun Abrahams’ challenging of a High Court ruling that 783 charges should be reinstated against President Jacob Zuma; the Hawks apparently ignoring three reports implicating the Gupta family and their business partners in corruption, and the NPA’s reluctance to investigate SARS 2IC Jonas Makwakwa after the Financial Intelligence Centre flagged “suspicious deposits” into his personal account. This contrasts starkly with the 12-months-plus effort by the NPA and the Hawks to charge Finance Minister Pravin Gordhan, which failed. By MARIANNE THAMM.

“Prosecuting the powerful for serious offences is almost without exception the strongest prosecutorial imperative that trumps the other considerations of public policy. Where the politicians have wrongly appropriated this determination to themselves, or where the prosecutors have wrongly deferred to a political determination, we have a duty to speak out against abuses and act accordingly. When the prosecution is unduly punished for refusing to bow to undue pressure, we must also speak up. It is a sign of hope that there is no lack of those who are willing to make themselves heard.”

That was 2010, this is 2017 – and so much has happened in the ensuing years since Downer, who was the chief prosecutor in the Shabir Shaik trial and who lead the Bumiputera team (as the Zuma prosecuting team was known), made the above statement in a speech titled “The Rule of Law and Prosecutions: To Prosecute or not to Prosecute – A South African Perspective” at an address to the Middle Temple law conference.

Seven years after Downer’s suggestion that there were still signs of hope that “there is no lack of those who are willing to make themselves heard”, perhaps Nel’s shock departure could be viewed as a rather oblique method of transferring this “hope” in a new private prosecutions unit.

It is a drastic move, but, comrades, these are drastic times.

Back in 2009 Downer’s team had been opposed to the decision to discontinue the prosecution against Jacob Zuma and had consistently maintained that the only real consideration was whether there were merits to the charges.

In his speech in 2010, Downer, quoting Advocate Wim Trengrove SC, asked “what are the prospects of a proper investigation and prosecution of high crimes in high office in the future?”

Looking back, it is safe to reply from the clarity of the present that the chances are slim.

Many years after Downer’s speech, in April 2016, and with millions spent on legal fees both by the DA and various legal teams acting on behalf of Zuma, Downer and his team were vindicated when Judge Aubrey Ledwaba, on behalf of a full bench of the North Gauteng High Court, ruled that the President of the Republic of South Africa should face the charges as originally outlined in the indictment.

But the fat lady has not yet sung.

NPA head Shaun Abrahams soon afterwards announced his decision to appeal the High Court decision. It is a matter that is still to be heard at the SCA.

Speaking to Daily Maverick’s Stephen Grootes shortly after Nel’s resignation, Luvoyo Mfaku, NPA spokesperson, insisted that the “perception” that the NPA embarked on selective prosecutions “has no basis” and is a “misconception”.

But again we must turn to Groucho Marx rule and ask “who you gonna believe, me or your eyes?” and in this case also the piles and pages of affidavits that have clogged up the country’s legal system as a political proxy battle has played itself out in the country’s criminal justice system.

The NPA’s deputy director of public prosecutions, Nomgcobo Jiba, has been flame-grilled by 12 judges on four benches in several high-profile cases, including her stonewalling with regard to the Zuma “spy tapes”. Jiba and her head of the commercial crimes unit, Lawrence Mwrebi, have both been struck off the attorneys’ roll. It is a decision they are appealing.

So, from the charging and sidelining of former NPA prosecutor Glynnis Breytenbach as well as KwaZulu-Natal Hawks head, Johan Booysen, to the swift but not always successful shafting of high ranking officials like Robert McBride at IPID and Anwa Dramat, former head of the Hawks, and Gauteng Hawks head Shadrack Sibiya, the system has been exposed as a sham.

Dramat, Pillay, Booysen and McBride, through the labour court, the High Court, the Supreme Court and the Constitutional Court, were all vindicated and not only won their cases and their own cost orders but also cost orders against the institutions SAPS, SARS, the Hawks and IPID, who had acted illegally.

The cost to the fiscus and ultimately taxpayers, however, runs into many millions.

Downer described the executive decision to fire then NDPP head Vusi Pikoli when he opted to prosecute the country’s most senior policeman, National Commissioner Jackie Selebi, on charges of fraud and corruption, as “an all-time low on the rule-of-law barometer”.

Those were the good times, it turns out.

In the past two years the NPA relentlessly hounded Minister of Finance Pravin Gordhan, former acting SARS commissioner Ivan Pillay, and former Commissioner Oupa Magashula, creating an ever-moving target of charges in a clearly political attempt to get rid of them. In the end the NPA was forced to withdraw charges because of the bungling of the investigation, one that was zealously, but incompetently, conducted by the Hawks.

This very public abuse of the criminal justice system has mostly played itself out against the backdrop of a proxy battle raging through the “palace politics” of the ruling party, but is only the ears of the hippopotamus.

There are countless cases of suspected corruption by ANC-connected senior officials leading the country’s SOEs including the SABC, SAA, Eskom, Denel and Prasa that have simply been stonewalled, left uninvestigated or forced to the sidelines.

Then there are the some 15 cases lodged in the years up to 2014 by SARS with the Hawks and that resulted from the “Honey Badger” investigation into the illicit tobacco trade and that also just have never made it to a criminal court.

The Hawks, under its current irregularly appointed head, Lieutenant-General Mthandazo Ntlemeza, have no appetite, it seems, for these cases.

Instead the Hawks have poured resources and corralled teams of senior officials (some of whom have taken witnesses hostage in a SARS boardroom) in an all-out bid to stalk Gordhan while on the other hand assuring the Gupta family’s legal team that the directorate was not investigating charges against their clients.

“This office also wishes to confirm that there are no reports nor complaints relating to this matter that were received from the banks or the FIC as cited in your correspondence,” Ntlemeza wrote to Gupta lawyer Gert van der Merwe in January.

Ntlemeza added that he wished also to confirm that the case “relating to the suspicious transaction reports involving your clients is dealt with by this office, but presently there is no evidence that implicates your clients”.

Downer’s optimism that “there is no lack of those who are willing to make themselves heard” provides little succour today for those dedicated officials who refused to be captured and who were deliberately removed or manipulated out of the system for their refusal to do so. Today many are unemployed.

Downer in his speech also opines, “The success of the Selebi prosecution thus prompts the further question: who in future would successfully investigate and prosecute the chief of police, if the police are the only investigators?

“If a decision (or decisions) to prosecute is ultimately to lead to the destruction of an effective, constitutional prosecuting agency, then the next question is a tactical one: Is it better to leave aside the big decisions to prosecute that will attract the ire of the politicians and leave the agency intact to fight on effectively in other cases, or must the prosecutors continue to fight the good fight, knowing that they may be going for broke?”

Gerrie Nel clearly decided not to go for broke. He wanted out.

Days after his resignation the NPA admitted that it had ordered an “internal investigation” of the prosecutor three days before his departure.

The complaint (which the Daily Maverick has seen) relates to a curious shootout outside a KwaZulu-Natal grocery story. The complainant, a Laudium businessman, approached the Gauteng Hawks, led by Prince Mokotedi (who replaced Shadrack Sibiya), claiming he had been disrespected by Nel.

Advocate Shaun Abrahams took immediate and swift action, writing a letter to the complainant that he [Abrahams] and the NPA were “taking the allegations seriously”.

It was George Bush Sr’s political strategist Lee Atwater who first came up with the notion that “perception is reality”. But in the case of the Hawks, the NPA and our first citizen, who has been found to have violated the Constitution, we could swing it around and say “reality is perception”. There is no disguising it. DM

Photo: National Director of Public Prosecutions Shaun Abrahams (R) walks past his deputy Adv Nomgcobo Jiba as he leaves at the end of a media briefing in Pretoria, South Africa, May 23, 2016. REUTERS/Siphiwe Sibeko