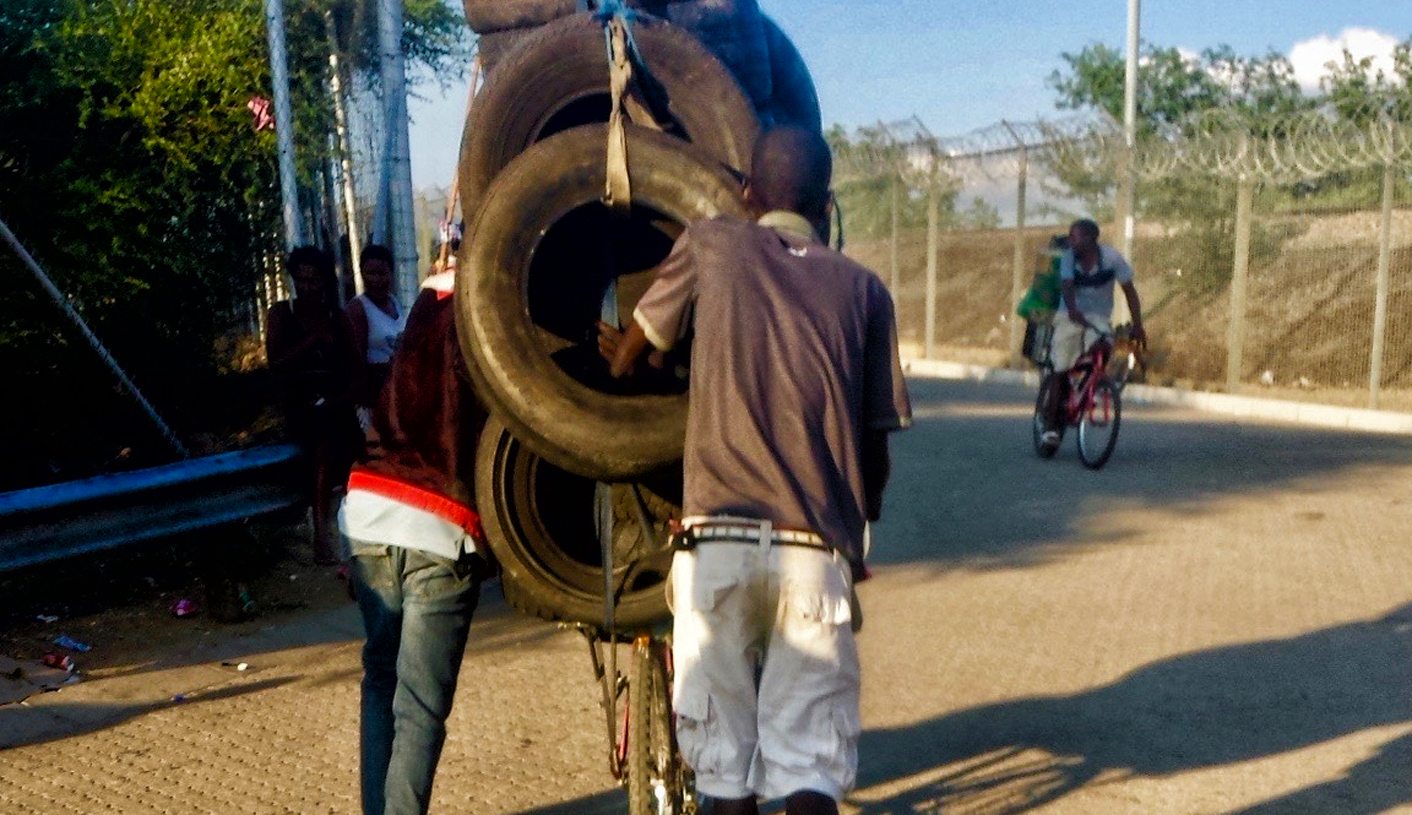 Zimbabwean men in Musina have to bribe immigration officials to make a meagre living. By GROUNDUP CORRESPONDENT.

Milos (not his real name) makes a living smuggling car and lorry tyres across the border from Musina, South Africa, to Beitbridge, Zimbabwe.

“It’s not smuggling, really. I walk with my load of old car tyres past immigration police in daylight,” says Milos.

GroundUp followed him on his round.

“Look. I am magical,” he says and laughs.

While thousands of travellers queue to get their passports stamped on either side of the border, Milos crosses casually, with no passport, past police boom gates, paying no duties for the load of smelly, sooty, old tyres, tied with a sisal rope and balanced precariously on his rusty Raleigh bicycle.

Milos gets up at 04:00. He travels the 26km from Musina to Beitbridge at least three times a day, Mondays to Thursdays.

“It’s a painful push,” he says, with 40kg of old tyres bound to the saddle of his small bicycle. “My limbs feel like needles are slicing through my flesh when I rest at 7pm.”

South African officers in blue fatigues with “Customs Police” displayed on them, and a service dog that barks at Milos, watch him pass.

“Good day, officer. Lovely dog,” says Milos to the South African immigration officers when he briefly parks his bicycle in front of the passport-check gate.

Milos is pulled into the bathroom by an officer. Less than a minute later, he emerges and proceeds with his heavy bicycle and tyres.

“One of the officers knows me,” Milos explains. “I gave them a R40 drinks tip.”

“There are too many closed circuit cameras now at Beitbridge Border, on the South African side. The bathroom act is to fool senior immigration officers into thinking I was being formally searched by junior law enforcers.”

On the the other side of the South African immigration building, where hundreds of Zimbabwean bus passengers queue to have their passports stamped to enter South Africa, Milos parks his bicycle next to a flower bed.

He enters the building and mingles with the people queuing for a few minutes before re-emerging.

“I fool them,” he says. “They think I slipped into the office to pay immigration duty and have my passport scanned … I don’t have a passport.”

He even begs the help of bus drivers and idle immigration officers to help lift his loaded bicycle.

“The tyres are dangerously heavy. If you miss your step, you fall flat to the tarmac. Both the bicycle and its load land on your body. You need help to stand up again,” he says.

Milos’s next hurdle is to pass the South African police deportation lorries parked at the bridge exit, across the Limpopo River. Officers here scan the passport pages of formal travellers to see that they have completed the procedures.

But when Milos and his bicycle pass by, an officer pulls a frozen Sprite 2-litre bottle from the carry bag on his back, slaps him lightly on the shoulder and, laughing, sees him on his way.

“Just one Coca-Cola or Sprite a week is the trick to pass,” he tells me. “These officers know me. We relax and drink together in Musina.”

His legs are now trembling and he is sweating from the weight of the load.

He is one of dozens of Zimbabwean men in Musina who push bicycles loaded with old tyres across the border.

“They pick old tyres from Musina garages, bins and factory dumps for re-sale across the border in Zimbabwe,” says the president of the Zimbabwe International Traders Cross Border Association Dennis Juru. “There is a brisk trade in second-hand South African car tyres in Beitbridge, Zimbabwe. Car drivers, garages and shoe manufacturers in Zimbabwe are the paying customers.”

Milos says, “My handlers across the border in Zimbabwe pay me R90 a day to scrounge factory dumps and garages for old, abandoned tyres in Musina. To push the tyres across the international border, I get R80. Each 10kg tyre fetches me five US dollars.”

On the Zimbabwean side

When Milos arrives on the other side of the bridge, a Zimbabwean soldier asks, “What did you bring us today, bicycle man?”

To the other travellers, the officer says, “Straight queue. I want to see valid passports.”

Milos removes his cap, and bows to the soldiers. One kicks the air in his direction.

“It´s a sign,” he explains. “A sign that says proceed to Zimbabwe without passport. I offer their supervisors $5 once a weekend. It’s a sweetener. They know me by name too.”

Milos stops at a dusty enclosure that serves as Zimbabwe’s immigration entrance hall. He begs a cigarette from other “tyre boys”, who are pedalling their bicycles in the opposite direction.

“Lucky them, they’ve finished their task,” he says.

But Milos dodges the formal passport hall and makes a detour up the road where trucks await inspection. From here, he wanders into Beitbridge town.

About a dozen “contractors” mill about him, inspecting the load. He is paid in US dollars.

Milos says the tyres are used on “ex-Jap cars” and for shoes. “Ex-Jap” are used cars imported from Japan. New tyres in Zimbabwe cost $100 (R1,400) each, so there is a thriving market for run-down tyres from South Africa, which sell for $20 (R300).

“Remember, I am a refugee. The law says I am not supposed to leave South Africa,” says Milos.

A Zimbabwean teacher in Beitbridge spots him. He wants Milos to bring him five fresh loaves of bread and a pizza from South Africa on his next tyre errand.

He pedals past Zimbabwean police guarding the border. They whistle at him.

“It’s a slight distraction. They know me,” he says, and ignores them.

On the South African side, he abandons the pedestrian walkway that also houses the railway line linking Zimbabwe and South Africa across the Limpopo River and he takes the bus lane.

“We are far off sight from immigration officers. It is easy to enter unnoticed from here,” he says.

Asked to comment, the spokesman for the Hawks, South Africa’s priority crime and corruption-fighting police unit, Brigadier Hangwani Mulaudzi, said the agency is cracking down on bribe-taking officers at border posts and has zero tolerance for corruption. DM

Photo: Dozens of Zimbabwean men in Musina push bicycles loaded with old tyres across the border. Photo by the author.