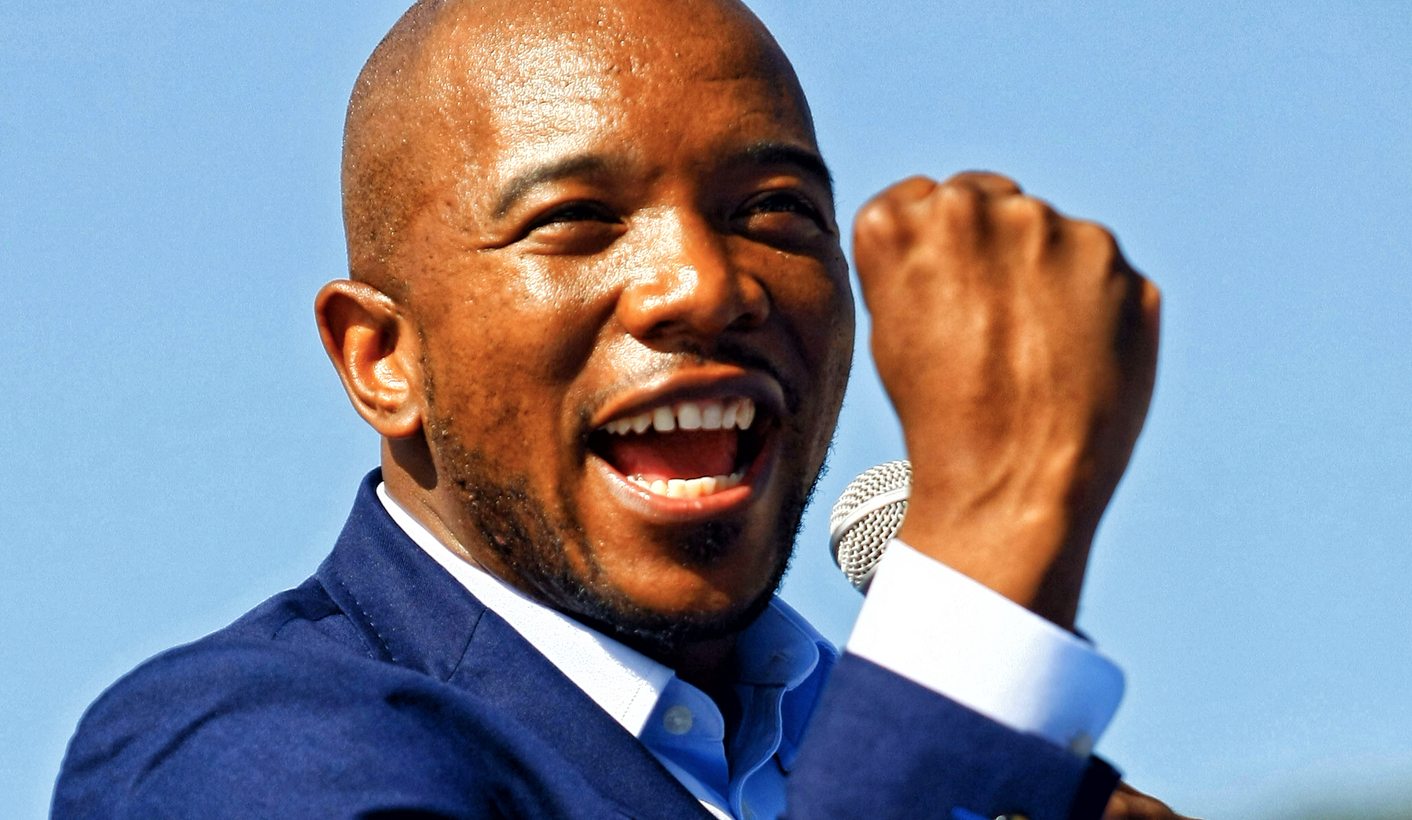 It’s the time of year when politicians look to capitalise on the attention around the State of the Nation Address. In one of his first major addresses since the Democratic Alliance gained control of three new metros in 2016’s local elections, DA leader Mmusi Maimane painted a vivid picture of what a national DA government has planned. Pie in the sky? Maybe. But make no mistake: the battle for 2019 is on. By REBECCA DAVIS.

Mmusi Maimane or his speechwriters have been reading James Baldwin, the African-American writer who is enjoying a resurgence at the moment in tandem with the release of a documentary about him, I Am Not Your Negro.

The DA leader bookended his Wednesday speech by quoting the introduction to a 1962 Baldwin essay: “Not everything that is faced can be changed; but nothing can be changed until it is faced.”

It was also Baldwin who once calmly answered the question: “Why aren’t the negroes optimistic [about their futures]?” with the words: “Well, I don’t think there’s much hope, to tell you the truth”. Maimane, it’s safe to say, would disagree.

The pre-SONA address he gave in Cape Town to DA luminaries, foreign diplomats and journalists was replete with hope. One hope in particular: that in 2019, South Africa will vote the DA out of opposition and into government.

“When the 2019 elections roll around, we will have the inside lane in the race for the Union Buildings,” Maimane said. “In less than three years we will go to the polls to elect national and provincial governments. I assure you, the DA will be contesting those elections with the aim of winning.”

If anyone was left unsure of what this meant, he added: “As a party, we are now already preparing for national government.”

The DA has good reason to be feeling buoyant. Last year’s local government elections saw them go from governing one metro to winning control of four out of eight – a feat which would have seemed unthinkable a decade ago. At present, Maimane reminded his audience, the DA governs for over 16-million people.

Maimane cited events elsewhere in Africa, such as the recent regime change in The Gambia, as evidence that governments of liberation do not have to rule forever. “The fact that so many countries in the region are now governed by former opposition parties points to a successful transition to a post-liberation movement era,” Maimane said. “That is possible here in the SADC region too.”

His address bore the lofty title “A Rescue Mission for the Lost Generation”, and it made clear where the DA will place its energies over the next three years: on winning the hearts – and votes – of the youth. The party intends to appeal to the age cohort nominally known as the “born frees”, but who are really, in Maimane’s phrasing, “everywhere in chains”.

The decision to focus on young South Africans is a canny one for a number of reasons. South African youth make up the majority of the population. Their unemployment rate has consistently been higher than the adult population since the 2008 recession. Studies have also suggested that the votes of young South Africans may be more up for grabs than those of their parents because they are less likely to be swayed by historical or family loyalties. The significance of the ANC’s role as liberators, therefore, is likely to dwindle for the youth the further we travel from the apartheid years.

What is the DA hoping to promise them that’s different? Here’s one example: it has bold plans for fixing the mess of education. Maimane said the DA is currently researching a “voucher system” for schooling: “Instead of funding going to schools as it does now, funding would follow the child in the form of an education voucher”.

Maimane said that this would give parents the power to remove their children from non-performing schools and transfer them to those that do. (He did not explain how allocation of places would work.) “This, in turn, will foster healthy competition among schools to attract learners,” Maimane said. “Under this system, only schools that provide our children with a decent education will survive.”

It’s a classic DA scheme, drawing on a neoliberal worldview which, to quote George Monbiot, “sees competition as the defining characteristic of human relations”. It is the result of a praiseworthy willingness within the party to look globally for policy ideas – school voucher programmes already exist within several American states.

It’s also a risky experiment: it might work, but it might not. One study found that the system “takes away much needed public funds from already failing schools”, and then expects schools to compete as if equals. Some would say that this false assumption of a level playing field within competition is also a DA hallmark.

But it’s a fresh idea in a country where the old ways of doing things clearly aren’t working. That in itself may hold appeal for South Africans frustrated with the status quo. If you don’t like that idea, the DA has others. Try this one: a free year of technical and vocational training for matriculants who don’t qualify for university.

Of course, it’s easy to promise things from outside the Union Buildings, and more difficult to keep those promises when in power. The DA is hoping that the example of economic growth in Cape Town is proof of what it can achieve where it governs – Maimane cited Cape Town’s ranking of 21st in the world for foreign investment destinations.

The perception that Cape Town governs well mainly for the elite was not a point Maimane chose to tackle in detail, beyond saying that Cape Town’s Mayor Patricia de Lille is implementing plans “aimed at reversing the legacy of apartheid spatial planning and improving service delivery for Cape Town’s poorest communities”.

The choice to invite members of the diplomatic corps to the address was an interesting one: representatives from, among other places, Canada, France and Britain were in attendance too. For them, Maimane had a special message too for a future in which the DA governs nationally: “We will expect our embassies to earn their keep by becoming trade and investment centres.”

The confidence with which Maimane spoke of the hypothetical DA government was compelling. He was in full preacher mood, at times seeming to be addressing a public stadium rather than a small Cape Town venue. “My fellow South Africans”, he called his audience, though at one stage slipped up with an “Honourable Members”.

Whether the DA’s vision proves as compelling to the “lost generation” as it did to a room of elites remains to be seen. One thing is clear, though: the DA is entirely serious about gunning for the keys to the Union Building in 2019. A lot can happen in three years. DM