In Trump He Trusts: Meet the man who could be the next US ambassador to South Africa 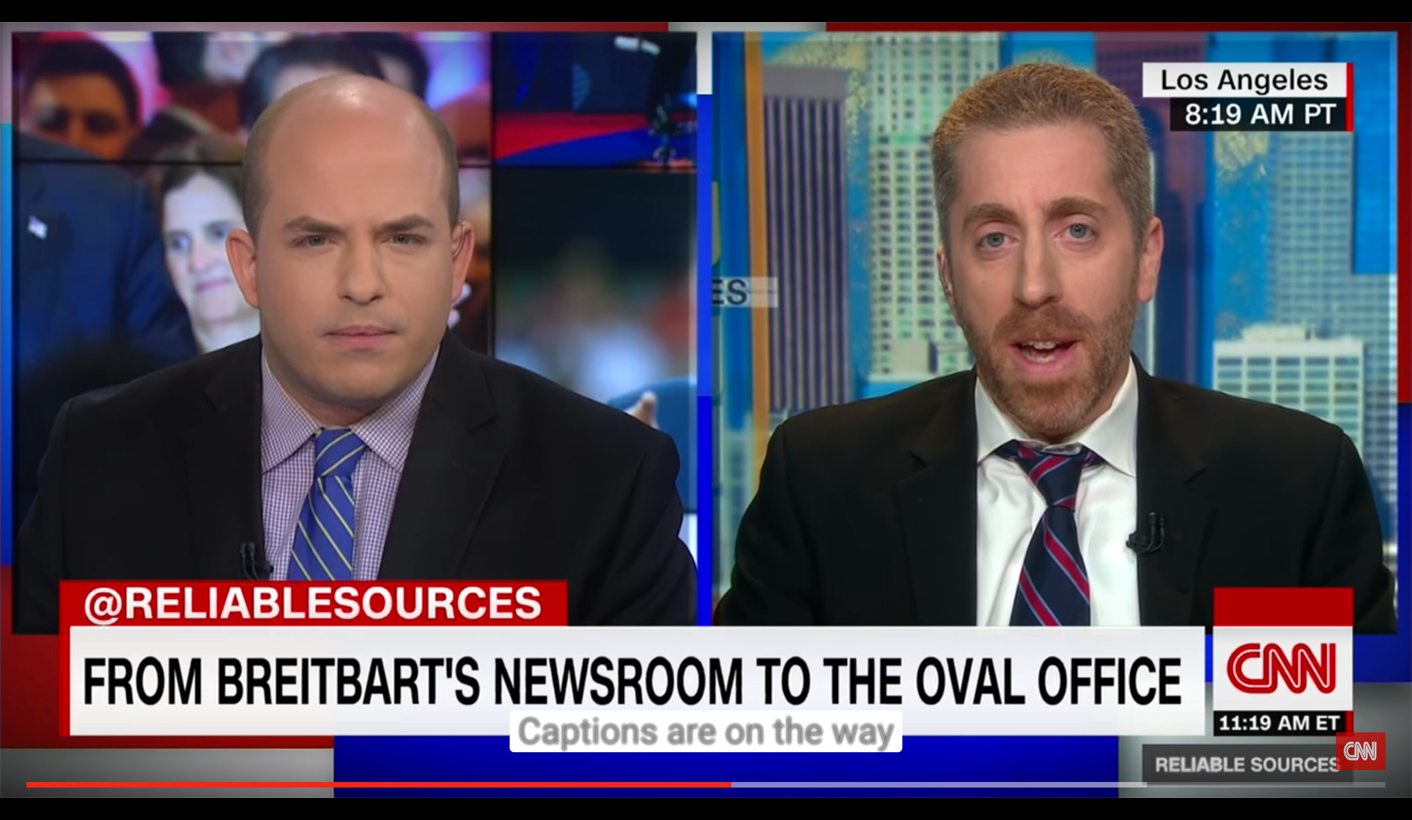 Joel Pollak is a South African-born lawyer, former speechwriter to Tony Leon and the son-in-law of a local anti-apartheid activist. He also happens to be the editor-at-large of Breitbart, the alt-right website credited with helping galvanise white nationalists in America. Now he is being touted as a potential US ambassador to South Africa. By REBECCA DAVIS.

“Data: Young Muslims In The West Are A Ticking Time Bomb”.

“The Solution to Online ‘Harassment’ is Simple: Women Should Log Off”.

These are a sample of recent headlines from the archive of the alt-right US website Breitbart, which helped Donald Trump ascend to the presidency. President Trump has already rewarded a number of its staff members. Former Breitbart chairman Steve Bannon is now the White House chief strategist, believed by many to be the real power behind the throne. Former Breitbart immigration reporter Julia Hahn has also been brought on to Trump’s advisory team, while Breitbart national security editor Sebastian Gorka is now deputy assistant to the president.

Trump may have yet another Breitbart appointment up his sleeve – and this one would affect South Africa directly. There is currently speculation in Washington that the Trump administration is considering Breitbart editor-at-large Joel Pollak as US ambassador to South Africa.

The idea that Pollak might find himself in line for a top role soon has been circulating for some time. Former Breitbart editor-at-large Ben Shapiro wrote last year:

“The new team at Trump headquarters will undoubtedly include all the Breitbart staffers who openly lusted after power within the Trump campaign: Joel Pollak, the Breitbart lawyer who desperately wanted to be a Trump speechwriter”.

From the perspective of the Trump administration, an ambassadorial role to South Africa for Pollak might make sense due to his South African ties.

Pollak knows South Africa well. He was born in Johannesburg to South African parents who emigrated to the USA. Pollak returned to the country of his birth for a postgraduate degree at the University of Cape Town and subsequently worked as chief speechwriter for former Democratic Alliance leader Tony Leon, from 2002 to 2006. His return to the US saw him run for Congress as a Tea Party Republican – unsuccessfully, despite harnessing his musical talents in his 2010 campaign, where he won only 31% of  the vote.

Pollak still refers to South Africa as his “native” country, and has called Western Cape Premier Helen Zille a “family friend”. When Pollak married Julia Bertelsmann in 2009, Zille gave them the use of her official residence Leeuwenhof to host their wedding.

Bertelsmann is the daughter of anti-apartheid activist Rhoda Kadalie, who hailed the victory of Donald Trump in last year’s elections as “good for the world”. Kadalie, who is the founder of the University of the Western Cape’s gender unit, referred to presidential contender Hillary Clinton as “pure evil” and “the equivalent of Jacob Zuma”.

Breitbart, the website where Pollak has found his political home, was openly described by chair Bannon last year as a platform for the alt-right. One of the website’s fixations is black violence; another is the possibility of whites becoming a minority in the USA. It ran an article referring disapprovingly to political commentator Bill Kristol as a “renegade Jew”. One of its high-profile contributors is right-wing nationalist Milo Yiannopoulos, banned from Twitter after encouraging his followers to tweet racist abuse at black actress Leslie Jones, and infamous for giving interviews stating that “Jews run the banks” and “Jews run the media”.

Former editor Shapiro described the site in August 2016 as having become “a party organ, a pathetic cog in the Trump-Media Complex and a gathering place for white nationalists”.

Among Pollak’s former DA colleagues, there is said to be consternation and bemusement at his apparent political transition to the hard right; he arrived in South Africa as a Clinton Democrat. Those who spoke to Daily Maverick on the record, however, talked of Pollak in guardedly positive terms.

“Ferociously hard-working and highly intelligent and a very gifted writer,” is how former boss Tony Leon remembers Pollak. “When he worked for us he was probably in transition from a social to a liberal democrat. He appears to have moved somewhat ideologically since.”

Leon added: “I do not know whether or not he will be named as ambassador here, but he has a deep feeling for this place so that could be a big positive.”

Former DA colleague Gareth van Onselen said of Pollak: “Highly intelligent, he could be difficult, unavailable, fraught and sometimes unthinkingly impulsive, but it was a difficult environment and the pressure on him to deliver was immense.” Van Onselen remembers Pollak attending the Democratic Convention in the USA in 2006 and returning full of praise for Barack Obama.

“I cannot comment on Joel’s [political] shift as I have not kept contact with him,” Van Onselen said. “Suffice it to say that he has found a home in the Tea Party and Breitbart, and with them a series of values and ideals that appear to differ fundamentally from those he held while at the DA.”

Pollak has, however, more than once sought to make the point that he believes the values of the DA to be more in line with America’s Republican Party than its Democratic party. In an interview with local site Aerodrome, Pollak stated: “My old friends in the Democratic Alliance may cringe – wrongly – to read this, but the fact is that the DA’s constitutionalism and the Tea Party’s constitutionalism are essentially the same.”

In a 2015 op-ed piece, he wrote: “[The DA’s core beliefs] map quite closely – if imperfectly – on to the principles of the Republican Party.”

Pollak made his fair share of enemies in South Africa as a result of public speeches and writings attacking Palestine and defending Israel against all comers. On an old blog, Pollak criticised Archbishop Desmond Tutu for his “noted anti-Israel views” and condemned TRC commissioner Dumisa Ntsebeza for “whipping up racial hatred in the South African legal profession”.

Other targets of Pollak’s ire in the past have included Judge Dennis Davis, with whom he clashed over criticism of controversial US lawyer Alan Dershowitz. Judge Davis subsequently referred to Pollak in response as a “failed Tea Party candidate”. Another nemesis is former Military Intelligence Minister Ronnie Kasrils, about whom Pollak authored a book in 2009 titled The Kasrils Affair: Jews and Minority Politics in post-Apartheid South Africa.

Since Trump’s election, Pollak has referred to the controversial proposal to move the US embassy to Jerusalem as a “no-brainer” and suggested that the US should cut funding to the Palestinian Authority.

Pollak first came to the attention of the US media as a student at Harvard Law School who tirelessly defended Israel. In 2013, a piece strongly critical of Breitbart was published by leftwing site Alternet. It pulled no punches in characterising Pollak:

“We spoke to several former Harvard classmates of Pollak. Each offered a uniform description of an extremely aggressive, often blundering, always self-promoting character who knew no shame.”

Breitbart’s allegiance to the Trump administration is indisputable, as is Pollak’s. When Breitbart’s own reporter Michelle Fields was captured on camera being manhandled to the ground by Trump campaign manager Corey Lewandowski, Pollak took Lewandowski’s side over his reporter’s. He wrote a piece denying that Lewandowski was responsible for the incident – despite footage confirming this – and instructed his team to stop tweeting about it.

Buzzfeed subsequently determined that Pollak had previously asked the Trump camp what his chances were of gaining a speechwriting job for Trump.

Pollak failed to win that job, but another one may be in store. Though Pollak has no diplomatic experience, this may not be a stumbling block in terms of his potential appointment. President Trump’s pick to be US ambassador to the United Nations, South Carolina Governor Nikki Haley, lacks any diplomatic experience either. This is something pointed out by Pollak himself in a recent piece for Breitbart: “The major drawback of the Haley pick is that she has no significant international diplomatic experience and no expertise in foreign policy.”

Haley is not alone. Newly confirmed Secretary of State Rex Tillerson has no government or diplomatic experience. Trump’s Treasury Secretary nominee Steven Mnuchin has never served in government, but led Trump’s campaign fundraising. Several other of Trump’s preferred top appointments have no direct experience in the positions for which Trump has selected them.

Pollak would make as different an ambassador to South Africa than his suave predecessor Patrick Gaspard as is possible to imagine. He has referred to the ANC’s “majoritarianism” as “dangerous”. He believes affirmation action policies are “disastrous”, Parliament is “weak”, and the South African government’s foreign policy from the time of Mandela is “bizarre”.

Pollak did not respond to requests for comment for this article. US Embassy spokesperson Cynthia Harvey told Daily Maverick: “It is still early in the transition process. Although we cannot speculate at this time about who will be appointed as the next ambassador to South Africa, during the most recent presidential transitions, the announcement has not been made until several months after the inauguration in order to allow the President and his new team the time to fully deliberate the decision and the US Senate to approve the choice.”

Harvey added: “It is worthy to note that ambassadors of all nations must be accepted by host governments, through a longstanding diplomatic practice known as Agrément.” DM