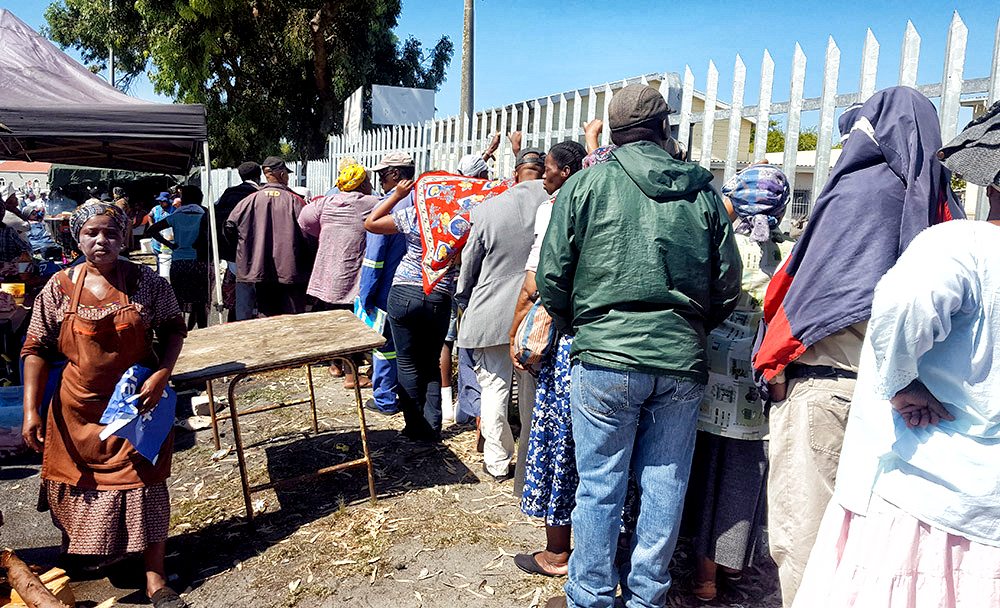 They wait in all kinds of weather, for hours at a time. And now the grants they rely on to live are mired in more controversy. By GROUNDUP staff.

On Wednesday the South African Social Security Agency (Sassa) defended its decision to extend its grant payment contract with Cash Paymaster Services (CPS). On the same day, many social grants were paid out. GroundUp visited several pay points to talk to recipients.

Sassa’s current contract with CPS — the company tasked with distributing social grants — was declared invalid by the Constitutional Court in 2014. Rather than appoint a new contractor, Sassa submitted a plan to the court to take over the payments to 17-million beneficiaries itself by April 1, 2017. But during a briefing to Parliament’s portfolio committee on Social Development on Wednesday, Sassa acknowledged that the agency was not ready and said the CPS contract would be extended.

The agency has been mired in controversy in recent years, partly because of unauthorised deductions from the accounts of beneficiaries by private companies. Advocacy group Black Sash launched the “Hands off our Grants” campaign to bring the plight of these beneficiaries to the attention of government.

At pay points visited on Wednesday by GroundUp, social grant recipients had been waiting for hours to receive their money.

In Dr Pixley ka Seme Street some 80 people were queuing for their grants. Some had been there from 5.30am.

Sitting on a piece of newspaper, Jabu Mbambo, 64, said she was tired and hungry. “I come from KwaMakhutha and I have to wake up at around 4am to get a taxi to town and make it to the line around 7am. After an hour of standing, your knees get weak and your body gets weak. So I normally spend the last few hours seated here by the side of the road.”

Thembisile Mhlongo, 32, mother of five, said she just hoped the machine would not be offline again. “Last month, I waited in line for nearly three hours and when I was near the front, they said the machine was offline, and we were told to go somewhere else. Some of us come here having no money, and when you get mugged or the machine no longer works, you have no money to go home.

“So we wait, with the scorching sun or rain, we always wait.”

Gculisile Mchunu, 53, was trying a new pay point because the last few times money has been deducted from her account for reasons she doesn’t understand. She said she hoped she would get all of her money this time.

Mbongeni Luthuli, 70, said he’d been queuing for four hours from 6am. He said some people bribed security guards and tellers in order to jump the queue. “This delays the time for people who cannot pay.”

Twenty-two-year-old Ncediswa Nofaya from Ntabankulu said she had not been getting the full amount of the grant for her son since his birth in 2012. “I have never received anything more than R300 (the child support grant is R360 per month – editor) and my numerous attempts to get help from Sassa offices in Ntabankulu and my pay point in the village were unsuccessful all these years. I hear the same story that I buy electricity and airtime. We do not have electricity in our village and I had no phone between 2012 and 2013 when the problem started.”

Nothemba Bhala, 39, from Dumsi, said she had borrowed R800 in December 2015 from a moneylender who kept copies of her Sassa card and her PIN, and deducts repayments every month. She said she was left with nothing in her account and has no other option but to seek another loan.

“When you come here you bring your ID and your Sassa card which they scan and keep copies in their system and they ask for your pin so they can automatically deduct instalments.”

She got her loan an hour later and still had to buy groceries for her family of eight, take a two-hour bakkie ride to her village and then walk half a kilometre to her house.

Zimkhitha Ntlantsana, 25, said her grandmother, from Badibanise village, never received her full pension. She said at Sassa offices they had been told the pensioner used her cellphone to buy airtime, though they had explained that she had no phone. “We left the offices hopelessly and the problem continues,” Ntlantsana said.

?At the ATM in Boxer supermarket in Motherwell, elderly and disabled social grant recipients were being assisted by shop assistants.

One woman said she sent her daughter to stand for her inside the shop as she could not wait hours in the queue. “People don’t respect the disabled any more. They want us to stand in the same queue as them yet they know that we are disabled. Hence we send our children to stand for us.”

Mziwamahlubi Mgidigidi, 70, started queuing at Boxer supermarket in Mdantsane but gave up and moved to another queue at Shoprite because the machines were not working. An hour later he said: “I’m still here as you can see but we are getting closer now. Usually they let us queue inside and give us chairs, but today we were told to stand outside. There are no chairs and it’s cold. At least the rain has stopped,” he added.

Nocawe Nkwali, 63, said she had been in a queue since 7am but had left when the rain started. “I’m coming here for the second time today, at least now the queue is moving,” she said.

Seventy-year-old Francisco Downes, who gets his grant from a pay point in Mitchells Plain, said he had unauthorised deductions of R30 to R60 taken from his pension for several months. “People think it is little money and you won’t notice it or won’t complain, but it is a lot to us, because it is the only money we get each month.”

Mary Lacket, 66, said R80 was deducted monthly for insurance she did not remember signing up for. “I would like to cancel the insurance but I don’t know where because Sassa said they have nothing to do with that,” she said.

GroundUp arrived at the pay point at 9.30am and there was no queue. Everyone was seated inside the hall and it took at most 15 minutes for a person to be helped. But one pensioner told GroundUp grant recipients usually queued for four hours.

In Parow Jacob Van Zyl, 59, said he had been queuing for his disability grant since since 7am but at noon he was far from being served.

He complained that the only toilets at the pay point were for staff. People in the queue had to use public toilets about a kilometre away and lose their place in the queue. He said old people and people with children should be served first.

The Ikwezi Sport and Recreation Centre in Gugulethu was abuzz from early in the morning with people queuing in two lines to receive their social grants. With the sun already scorching, people used newspapers, caps, jackets and head wraps to provide shade for themselves. Others found a little shade against fences across the road. Vendors sold meat and mealies and provided water. Some people said they had been at the centre from 7am.

“Sometimes you prepare yourself to stand here the whole day,” said one woman who did not want to give her name.

Another woman said she was at the mercy of airtime and electricity deductions that she knew nothing about. “Sisi, I have three children that I have to take care of. I am unemployed. I don’t have time to come to Sassa offices back and forth trying to find out about these deductions. I just wish that this system could work efficiently for us struggling people,” she said.

Recipients GroundUp spoke to said they knew nothing about the deadlines for Sassa to take over the grants. They had always thought that the social grants came directly from Sassa. DM