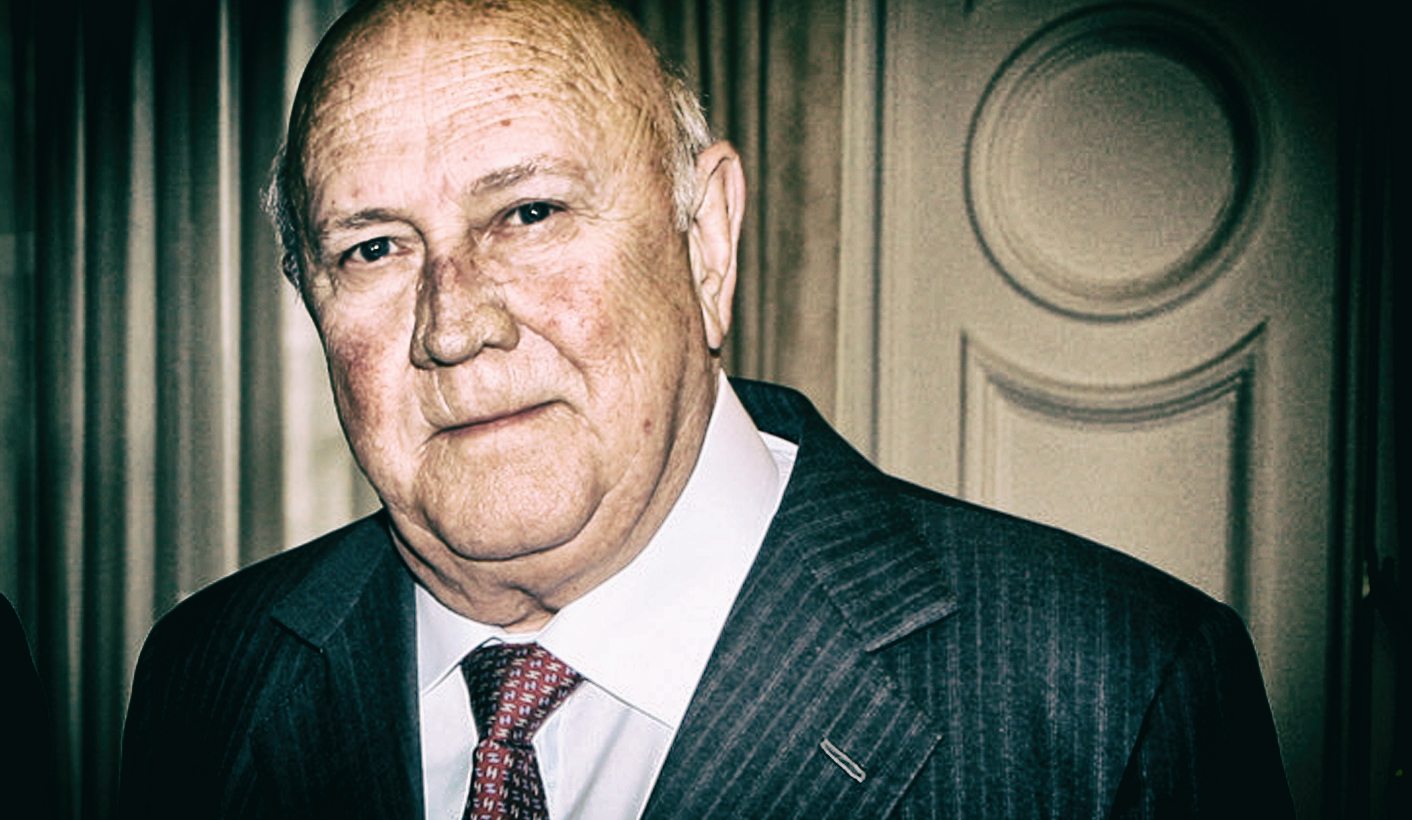 It’s 27 years this week since FW de Klerk announced the unbanning of the ANC, but South Africa’s last apartheid president isn’t done talking yet. At the annual conference of his foundation in Cape Town, De Klerk did not mince his words when describing his fears for the white population of the country. Economist Moeletsi Mbeki urged the government to stop scapegoating and to abandon a posture of “victimhood”. Pepkor billionaire Christo Wiese, meanwhile, expressed a need for a business-friendly environment. By REBECCA DAVIS.

FW de Klerk has made no secret of his differences with South Africa’s current government in recent years, but on Thursday he delivered perhaps his harshest condemnation to date. In front of a well-heeled, majority white audience in Cape Town – including the likes of South Africa’s richest woman Wendy Appelbaum and Marikana commission judge Ian Farlam – De Klerk hit out at the government’s “openly hostile attitude to white South Africans”.

De Klerk warned of a future in which racial minorities in South Africa would only be able to participate from within “demographic pens”, earning himself murmurs of agreement from the audience.

“The economic and cultural space in which minorities will be allowed to operate will be restricted to the proportional demographic pens to which they have been consigned,” De Klerk said. “These pens will progressively diminish as the percentage of minorities in the total population declines.”

The conference’s title was “The Constitution and Governance – At Another Crossroads”, but de Klerk’s contribution indicated that in his view, the road has been well and truly crossed.

“We have trundled aimlessly down the road to societal decline,” the former president said. “If one reads President Zuma’s recent statements, the only conclusion that one can reach is that he is determined to accelerate our descent along the road to state capture, economic crisis and racial confrontation. We are now unambiguously on the wrong road.”

Former Constitutional Court judge Zac Yacoob, brought in to give the legal perspective on South Africa’s state of affairs, reminded the audience that the law is both “flexible and multi-sided”, and – because of that – can be used to serve the interests of different camps at different times.

“The law was used as a weapon by both sides in our struggle for democracy […] And the law remains that weapon,” Yacoob said. Courts may differ from each other, he said, and it is not ideal for courts to be drawn into political disputes, but nonetheless a reality.

“What we need is discipline on the part of political actors,” Yacoob said, urging adherence to the rulings of the Constitutional Court. He also suggested that a greater degree of constitutional literacy could benefit the country as a whole.

“Before we laugh at parliamentarians, how many of you have carefully read the Bill of Rights?” Yacoob asked.

Economist Moeletsi Mbeki had a less gloomy take on matters, but characterised this moment as a “crisis of government”.

Mbeki said that the current crisis was caused by, among other factors, an inability to forge an “inclusive economy” and “the fear among the dominant classes of possible insurrection by the masses”.

Comparing South Africa to China, Mbeki said that the difference was that China had transformed its economy but failed to transform its politics, whereas South Africa has transformed its politics but failed to transform its economy. As a result, China has succeeded in lifting millions of people out of poverty, but is increasingly facing conflict from a middle class demanding freedom and democracy.

By contrast, Mbeki characterised South Africa’s democracy as a success, in that the country has a functioning multiparty political system, independent elections, an independent judiciary and media and a thriving private sector. Where the government has fallen down is in its failure to modernise the economy: introducing excessive government intervention in business and relying too heavily on commodities like minerals. BEE, he said, has “essentially failed” as a project, with only .44% of the population falling into the top bracket of truly economically elite.

“Unable to meet demands for economic modernisation, the ANC government is turning to racial nationalism and adopting an anti-West posture,” Mbeki said. “It has created a scapegoat called White Monopoly Capital.”

Anti-Western sentiment is futile in South Africa, Mbeki suggested, because South Africa will always be of major geopolitical interest to the West through its control of entry and exit into the Indian and Atlantic Oceans. “Western powers therefore want to ensure that whichever government controls South Africa is well disposed towards the West,” he said. This was nothing new. “For the last 200 years,” Mbeki said, “South Africans have not been able to resolve their society’s problems without the help of foreigners.”

One of SA’s richest man Christo Wiese took Mbeki’s pro-business sentiment and ran with it, to say the least. The owner of a spaza shop and the owner of a chain of formal stores have one major thing in common, Wiese suggested: they both require business-friendly environments. The retail magnate said that something often overlooked by activists, ideologues and politicians was the fact that “there is little difference between business interests and other interests”.

Favourable conditions for business, Wiese said, normally translate to other favourable social conditions within a country.

Later, Wiese suggested that there existed in South Africa “a perverse obsession about the rich with little or no regard for what would happen to the poor if the rich were pulled down”. He did not elaborate on the fate of the poor if that eventuality came to pass. South Africa’s problem was one of poverty rather than wealth, Wiese said, and the notion that whites are still in control of the economy is “racially-charged misinformation”.

The South African government should take care not to worsen conditions for business through increased intervention, Wiese warned.

“What promotes prosperity should no longer be debated. Market economies out-perform non-market economies,” he said. “There is absolutely no reason to question the superiority of free or nearly free markets unless you regard North Korea as a paradise.”

Wiese suggested that investment in South Africa would fall dramatically if the proposed expropriation of land were to go ahead, since investors everywhere tend to look for the assurance of secure property rights. Instead, government should be looking to implement “market-friendly policies” like red tape reduction and “competitive outsourcing”. DM