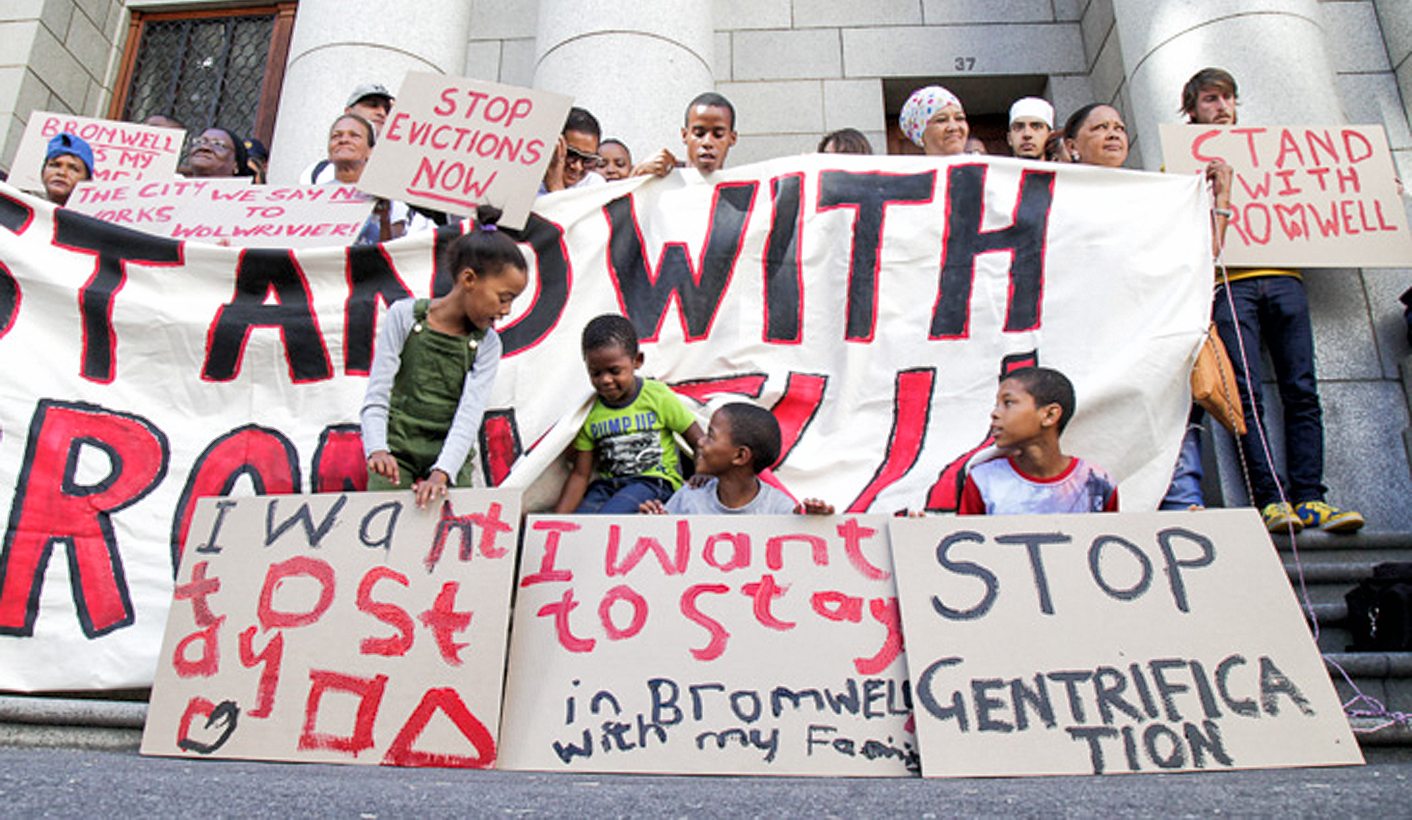 A judge says an argument based on the distance from Woodstock to Wolwerivier – to which residents of Woodstock’s Bromwell Street may be moved following their eviction – is inadequate. By Barbara Maregele for GROUNDUP.

The eviction order against Bromwell Street tenants should be suspended until the City of Cape Town provides “reasonable” emergency housing closer to Woodstock. This was the argument of lawyers representing the group in the Western Cape High Court on Tuesday.

But the City’s legal team argued that the reasons given by the tenants for why they should not be temporarily housed in Wolwerivier are unacceptable.

The Bromwell Street families are facing eviction by the Woodstock Hub company. The eviction order was suspended last year for the City to provide emergency housing, but its offer to relocate the tenants to Wolwerivier has been rejected.

Representing the tenants, Advocate Sheldon Magardie asked the court to rule that the City’s offer failed to take into account the personal circumstances of each family.

“We are questioning the City’s reasonableness suggesting Wolwerivier which is situated 29 kilometres from Woodstock as the only emergency housing available nearby Woodstock.”

Magardie said the City had failed in its Constitutional obligation to provide adequate emergency housing by offering Wolwerivier as the only option for relocation. “There are 45 properties in the area, 15 of which are owned by the City. The City needs to explain why that particular location was chosen and to consider the consequences the relocation will have on these residents,” he said.

Magardie said Wolwerivier was far from amenities such as public transport, schooling and healthcare. “The City’s response has been that it has acted reasonably. There have been a number of affidavits filed, a social audit [on Wolwerivier] and media reports which raise concerns about the area,” he said.

Magardie argued that an inspection in loco at Wolwerivier could shed light on some of the concerns raised by the tenants. However, the City and the Woodstock Hub company objected to the inspection in loco, stating that it would be a “waste of time”.

Acting Judge Leslie Weinkove said Magardie’s argument, which had been based on the location of Wolwerivier, was inadequate.

“There are so many people who commute into the City for work from areas like Somerset West which is further than Wolwerivier. Whether or not these people can afford the taxi fare is something else,” he said.

Magardie said this case was important as it touched on the current crisis regarding affordable housing in Cape Town. “While it’s not unique to Cape Town, the City is facing one of the worst housing affordability crises,” he said.

But Weinkove questioned Magardie on the court’s ability to adequately rule on the City’s obligation to provide adequate emergency housing near Woodstock. “If I rule that the City hasn’t done enough, will the people stay in Bromwell Street at the expense of Woodstock Hub until the matter is finalised, however long that may take? If they are given land in the area, what about the hundreds of thousands of other people who would also love to stay in Woodstock?”

He also questioned the “lack of expert evidence” supporting the tenants’ reasons for not wanting to relocate to Wolwerivier. Referring to an affidavit by resident Charnell Commando, in which she suggests a number of properties in the community, Weinkove said: “How does this person know what the cost implications will be on these properties? She doesn’t know what the City’s budget is; she is just a kitchen assistant.”

Advocate Karrisha Pillay, representing the City, said the tenants’ concerns with Wolwerivier’s location were unreasonable. “In the affidavits, one family indicated that they had searched for alternative accommodation in Mitchells Plain which is about 24km from Woodstock. Wolwerivier is just 28.2km away. Another family said Wolwerivier is far away from work opportunities, but no one is currently employed,” argued Pillay.

The packed public gallery erupted in laughter when Pillay suggested “Blikkiesdorp” as another option for temporary accommodation.

Pillay said that the City had gone to “extreme lengths” to engage with residents regarding the provision of emergency housing. “There is a fundamental distinction between providing adequate housing and emergency temporary housing.”

The matter continues in court on Wednesday. DM