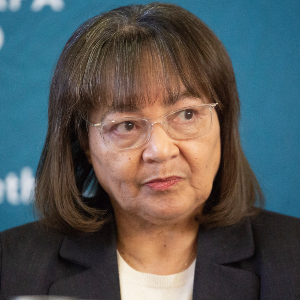 From Wednesday, DA Western Cape will be led by Bonginkosi Madikizela, the party’s deputy provincial leader and Human Settlements MEC, as incumbent Patricia de Lille steps down short of serving a full term to focus on being mayor of Cape Town. De Lille’s resignation was officially delivered on Friday and accepted over the weekend by the DA’s national leadership. Styled as a step so De Lille can give her “absolute dedication” to service delivery in the city, the resignation letter says she will not contest the provincial top party political office at the scheduled congress later in 2017. By MARIANNE MERTEN.

Insiders say Patricia de Lille’s resignation is not a surprise. Word of her often-difficult relationship with fellow DA members, who have coalesced into various groupings both in the city and in the province, has long made the rounds.

One manifestation of these troubles, it was pointed out in the run-up to the 2016 local government elections, was the explosion of staff in her mayoral office as De Lille sought to surround herself with trusted staff. Another, Daily Maverick was recently told, is that De Lille is being forced to work with at least one DA member she’d rather not have on her mayoral committee, but must due to party political dynamics. In addition, ructions emerged over the recent rejig of Cape Town’s administration, making four mayoral committee members responsible for service delivery across the city, officially known as the organisational development and transformation plan (ODTP).

But De Lille’s hands are bound in the greater political scheme: Cape Town as the longest DA-run metro in South Africa since 2006 is frequently touted as proof the party governs better than the ANC. And within this wriggle room, De Lille last week made her choice.

“The DA-run City of Cape Town is taking a new direction in addressing inequality through better service delivery. There is still much more that we must do to redress the legacy of apartheid, so that we keep on making progress in the city,” De Lille’s media statement on her resignation said on Monday. “These exciting changes will mean even more demands on me, in my capacity as the DA’s elected executive mayor. I am determined to give this new task my absolute dedication, and I have therefore chosen to step down as leader of the DA in the Western Cape.”

DA national leader Mmusi Maimane’s spokesperson Mabine Seabe has confirmed the party boss and De Lille met last week before the resignation letter was delivered on Friday, discussed by the national leadership – and accepted. Wishing De Lille the best, Maimane has thanked her for her work and “commitment to build a better South Africa”. There will not be an early provincial leadership contest, Seabe said, as De Lille’s deputy Madikizela will serve as interim provincial DA leader until the party’s provincial congress later this year.

De Lille has played a significant role for the DA since the 2010 merger of her Independent Democrats (ID), formed after leaving the Pan-Africanist Congress (PAC) in 2003, into the DA. From the start she has featured on DA election campaigns and posters alongside DA national leaders, initially Western Cape premier Helen Zille and parliamentary leader Lindiwe Mazibuko, and more recently Maimane.

In April 2015 De Lille emerged as Western Cape party leader after a short contest in which several candidates dropped out, leaving as the only rival Lennit Max, a former ID MP who publicly clashed with De Lille. But Max was trounced as De Lille, who was Cape Town mayor, took 69% of the vote to become the DA provincial leader.

This was the perfect political alignment ahead of a hotly contested 2016 local government elections for the DA, which in May 2015 had elected Maimane to take over from Zille after she announced stepping down as national leader. The party had made no secret that it wanted to boost its support, and number of councils in its fold.

The political benefits of such configuration centred on De Lille’s role as both metro and provincial leader on the municipal poll campaign trail may well have contributed to the (temporary) silencing of complaints about De Lille’s leadership style. But these dynamics now have passed.

In the 2016 local government elections the DA, often through co-operation with other parties, has clinched symbolically significant wins: Nelson Mandela Bay Metro alongside two of the three metros in South Africa’s economic heartland, Tshwane and Johannesburg, are now in opposition hands, as are a greater number of smaller municipalities not only in the Western Cape but across the country. In Cape Town, the election campaign under then DA mayoral candidate De Lille grew support from 60.9% in the previous 2011 municipal poll to 66.6% to give the party a two-thirds majority in the city.

De Lille has done her service and has made her choice – for now. “(Maimane) supported my move, given the strategic importance of our governments to realising the DA’s values and principles,” said De Lille’s statement on her resignation. “I also agreed to continue to assist other DA governments so that they can establish the same excellent delivery record as the City of Cape Town.” DM