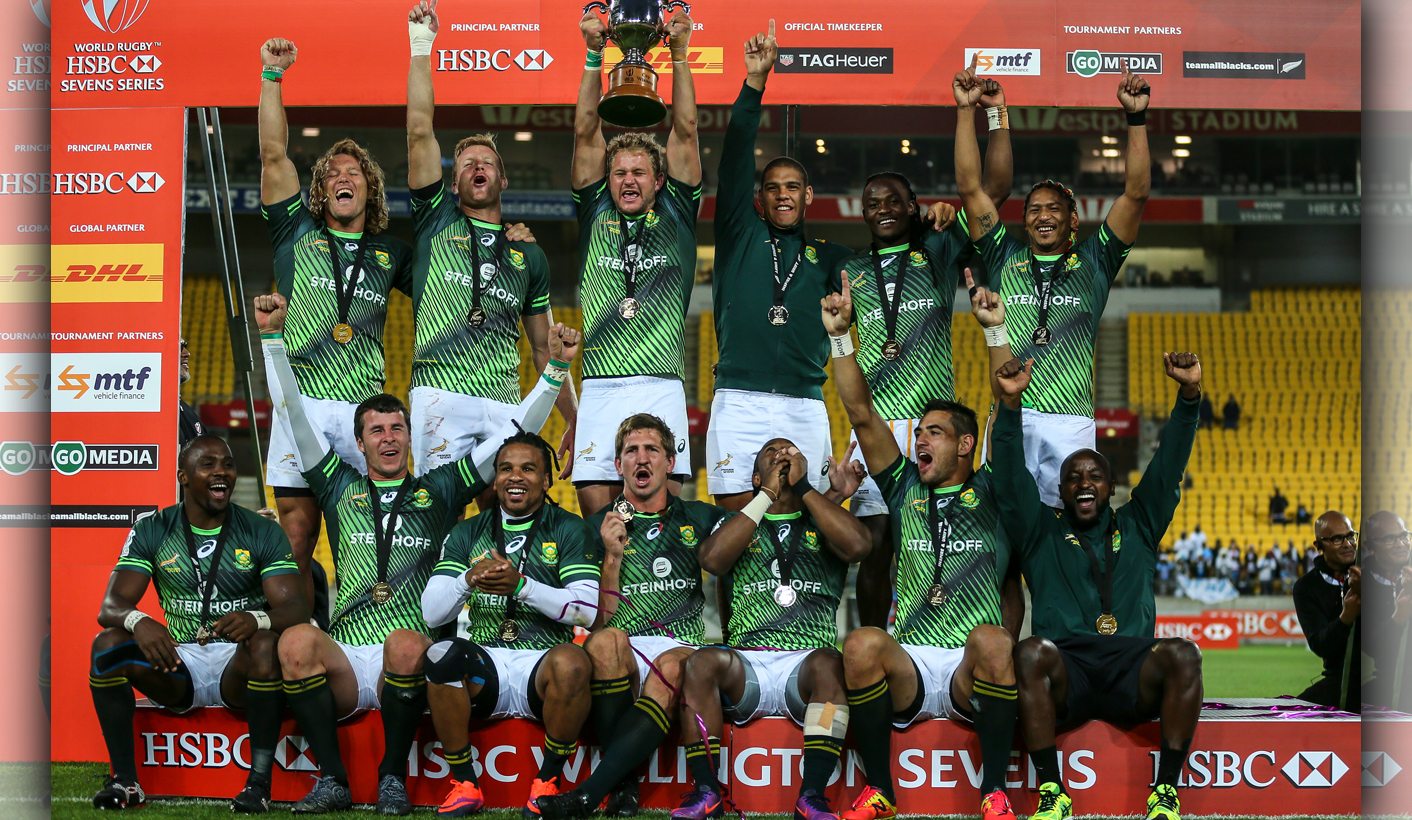 The Blitzboks won their second tournament of the World Series Sevens this season after a clinical weekend when they beat Fiji twice. Seabelo Senatla became the country’s leading try-scorer and the defence put on another textbook display on how to do it right. ANTOINETTE MULLER picks seven talking points from the weekend.

The South African Sevens team made up for the disappointment of not winning the title on home soil last weekend by beating Fiji twice in one weekend to clinch the Wellington Sevens trophy.

Having met in the group stages, where the Blitzboks won 31-12, the two sides were set for a rematch in Sunday’s final. Despite conceding early on, South Africa bounced back and won 5-26 to take the title.

The win – their second of the World Series – ensured they keep on sitting pretty at the top of the log on 63 points, ahead of Fiji (51 points) and England (49 points). The trophy was South Africa’s first in Wellington since 2002, a season when they finished runners-up.

In Sydney, they will play in Pool A, alongside England, Kenya and Japan. Here are seven talking points from the weekend.

Defence doesn’t often get the credit it deserves in a format like Sevens, but South Africa’s effort deserves to be lauded. They conceded just four tries in their six matches over the weekend. Their defence has been central to their campaign this season, too. The Blitzboks have made more tackles this season (394) than any other side. Australia are second with 315 and, barring a slight blip in Cape Town last year, expect it to be a cornerstone of the Blitzboks’ season.

But were their scrums legal?

Former Fiji coach Ben Ryan was nice about South Africa winning the trophy, but not so nice about their scrum. Ryan Tweeted that “every single South African scrum” over the weekend was illegal, saying their feed ins were just ever so slightly angled to the left shin of the hooker which results in said player trapping the ball and giving the opposition “zero chance” of winning it back.

A chance to finally be the bride

The Blitzboks are a very, very good team. They have been exactly that for a very long time. Yet their trophy cabinet doesn’t quite reflect that. While few sides could compete with Fiji under Ben Ryan, for South Africa to have won just one World Series Championship is staggering. Even bronze at the Rio Olympic Games counted as a disappointment. They have shown previously – at the last Commonwealth Games for example – that they have the bottle to be golden. Yet time and time again that focus has slipped. The Blitzboks have started this season well, but it is critical that they maintain consistency. If they fail to win the title yet again, some awkward questions might have to be asked about how a team so good can continue to have such an empty trophy cabinet.

What the XVs can learn from the Blitzboks

Despite their failures – in relative terms – the South African Sevens side still has plenty they can teach the flailing Sprinboks. We don’t mean to harp on about it, but for a start, the way the side has embraced transformation and inclusivity is unparalleled in South African rugby. Technically, there is no professional team in this country more skilled than the Blitzboks and there certainly isn’t a single team as well conditioned as they are. Yes, the two formats are completely different, but when looking at basic requirements for being a pro, the Blitzboks are exemplary.

South Africa will be without Seabelo Senatla’s services after the Sydney Sevens as he heads off for a stint with the Stormers in pursuit of a Bok jersey. He has already said that he wants to win gold at the next Olympics, so he’ll be back next season. There is, however, no doubt that his presence will be sorely missed. It’s not just his pace and agility that will leave a notable gap, but his ability to create space for other players means the Blitzboks will have to fiddle their game plan a bit. Kyle Brown and Cecil Afrika are also recovering from injuries and while that’s good news for youngsters looking to make their mark, it’s a test of developmental depth for the South Africans.

It’s increasingly hard to believe that Senatla is only 23 years old. He has become such a feature on the circuit that it’s hard to imagine a time when he wasn’t playing. Even more impressive is that he became the country’s leading try-scorer in the circuit over the weekend. The flier admitted that he will miss the fanfare when he leaves, but there’s no doubt he’ll be back and is on course to become the tournament’s leading try scorer. Kenya’s Collins Injera currently leads the pack with 237 tries, but if South Africa head into a dominant era with Senatla an integral part of the plan, it won’t take too long for him to break that record.

Where did the crowd go?

Part of the appeal of Sevens is the party atmosphere the crowd adds to the spectacle. While you probably don’t want to be stuck in the middle of the boisterous boytjies if you’re teetotal, it adds something unique even when watching on TV. Over the last few years, though, the crowd in Wellington has declined massively. Some will say that it’s partly down to New Zealand’s decline in the format, but most people who go to watch Sevens don’t go because their team is playing or doing well. In its heyday, the 34,500-seater Westpac Stadium could easily draw crowds of up to 30,000; these days, it’s probably half of that – and maybe a tenth or less will stay on to watch the final event. Every man and his dog has an opinion on why the numbers have dropped and, if you’re interested in any of those theories, Ben Strang’s piece on stuff.co.nz, as well as the comments (yes, really), is worth a read. DM