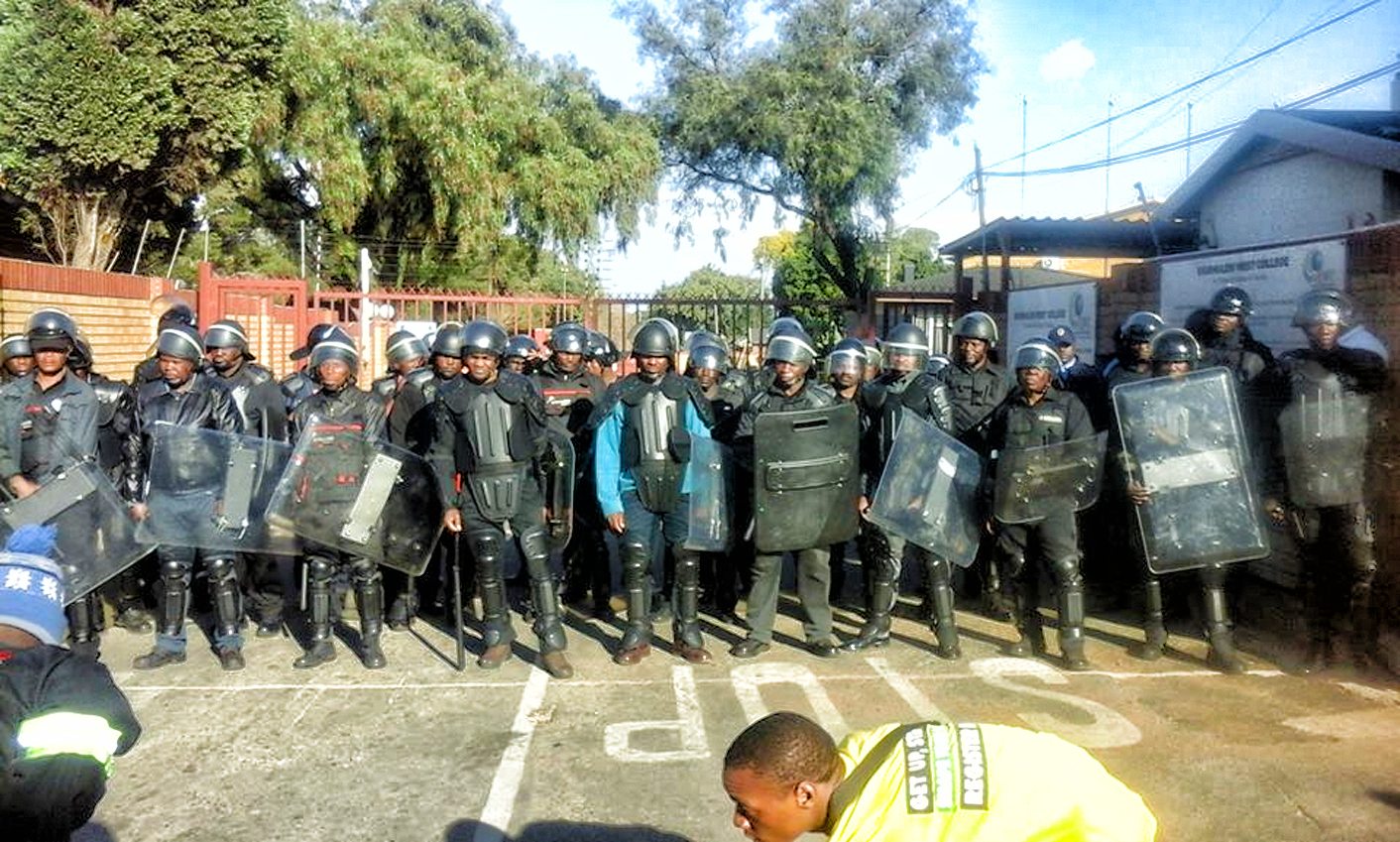 Scores of disgruntled Technical and Vocational Education and Training (TVET) students have been protesting at colleges across the country this week. They are calling for better leadership, qualified lecturers and for the long-standing backlog of certificates to be resolved. By Barbara Maragele for GROUNDUP.

The Parliamentary Portfolio Committee on Higher Education has pleaded with students not to protest, but to allow the department to engage with the relevant institutions.

The Departments of Higher Education and Training (DHET) and Telecommunications and Postal Services were called to Parliament in 2014 where they acknowledged the crisis at TVET colleges.

The presentation by DHET attributed the certificates backlog to a “lack of human resources capacity and technical expertise”.

The department has since taken over administration at some colleges, but student leaders say there are critical unresolved problems.

Following reports of sporadic protests at colleges this week, the chair of the portfolio committee, Connie September, said protesters should allow students to continue with academic activities. “Shutting down institutions denies the opportunity for engagement. It deprives everyone of the opportunity to further their much-needed education.”

Siphosethu Mavundla, 27, is a student affected by the backlog. He graduated from Majuba College in Newcastle in 2014 and is yet to receive his diploma.

“There were regular struggles with students not getting their results. The college always made excuses for why this happened and they aren’t very helpful. I was just told to register for the next year, without knowing my marks. I went back to the college seven times in the last three years and nothing helped,” he said.

Mavundla said he could not apply for a new position at his place of employment.

“My employers were audited last year and they asked for my diploma, which I didn’t have. I explained the situation, but they said it was very risky. There’s a post I wanted, but couldn’t apply for because I couldn’t produce the diploma. I’m worried they think I lied about my qualification,” he said.

SAFETSA president Yonke Twani said on Wednesday that more than 20 colleges in five provinces were closed due to protests. “There’s a number of critical issues, especially poor infrastructure development like hostels and workshop classrooms. The Department tells the public there are NSFAS bursaries, but when they get to the colleges, there’s insufficient funds.”

He said: “We are also concerned about the negative impact unqualified or poorly skilled lecturers will have on students.”

Twani said the organisation would continue its call for a nationwide shutdown until the Department remedied their concerns.

GroundUp contacted several TVET colleges. All of these colleges admitted to having students with outstanding certificates.

Zigqibo Kahla, marketing manager at King Sabata Dalindyebo College in Mthatha, said there were no major disruptions at the institution’s campuses. She said the backlog of certificates was an ongoing problem.

“DHET gave us a 95% compliance rating last year. The issue is at the department’s side. Some of our students haven’t received their certificates for the past three years. To help our students, we allow them to progress to the next phase while we wait for the results or certificates from DHET,” he said.

Sharon Grobbelaar, marketing manager at College of Cape Town, had a similar response. “Our year has commenced and we are aware of the national threat to disrupt the colleges. We have put measures in place to ensure the safety of our staff and students,” she said. “We do what we can, but we know there have been problems in the past on the department’s side. We are in constant communication with DHET to fast-track the process. I know DHET and the certifying body has been doing a lot to deal with the backlog,” she said.

She acknowledged the college’s “isolated” cases of students who are yet to receive their annual results and certificates. “For the students who qualify and graduate, the college gives them a certificate for completing the course. We also write a letter stating that the student is still waiting for the diploma from the department. That’s all we can do for now,” she said.

In a statement last week, Higher Education and Training Minister Blade Nzimande said there was “considerable progress” made at the TVET colleges taken over by the department just over two years ago.

Nzimande said government funded 256,904 students at TVET colleges at a cost of R2.3-billion last year. He noted that a lot needed to be done to rectify the students’ concerns. “We are aware that there is still a way to go until the institutions are at peak performance.”

He said his department planned to open three new TVET colleges in KwaZulu-Natal and Limpopo this year. DM