Op-Ed: The eerie, celebratory joy of the Women’s March on Washington 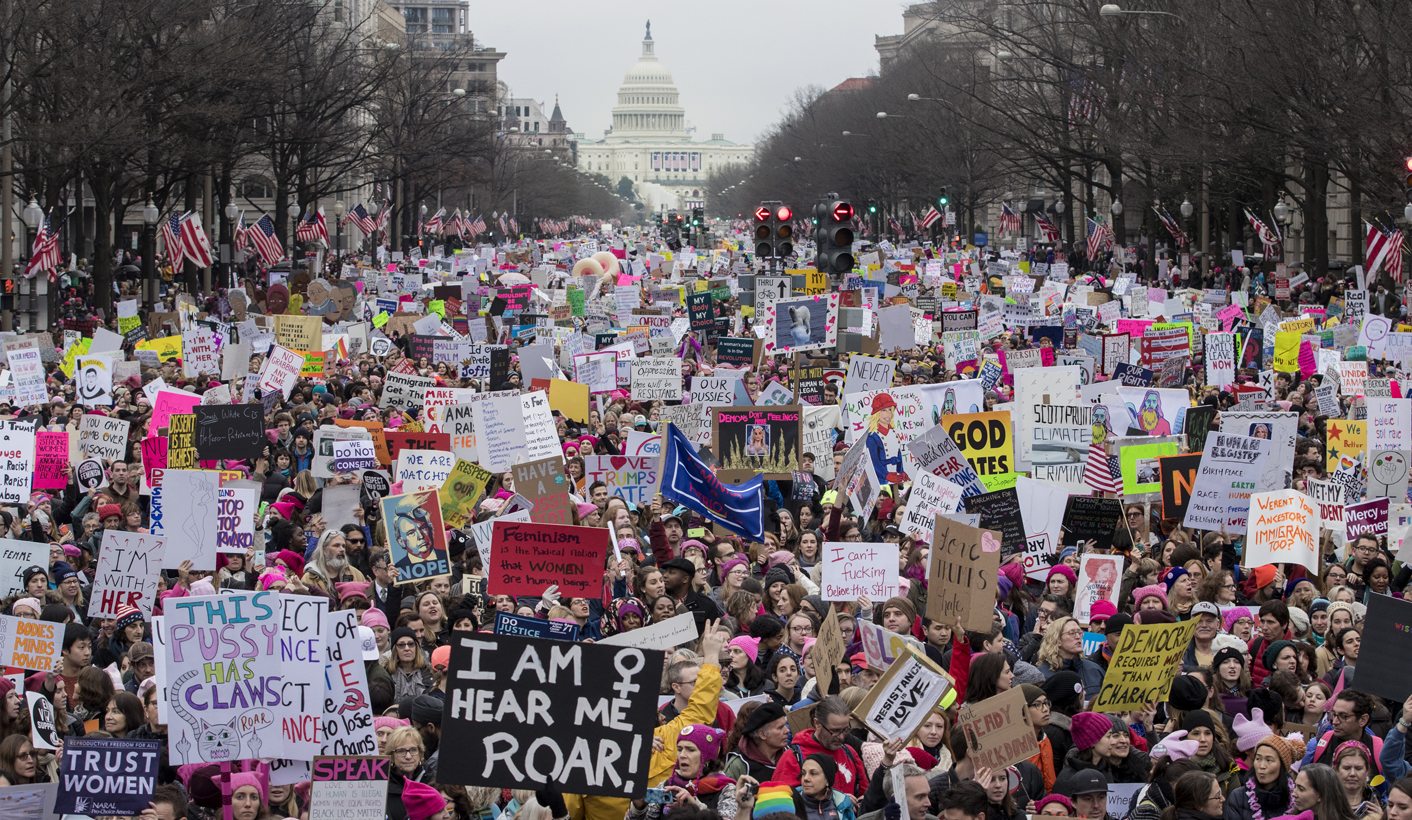 It was billed as a national women’s march, but from the beginning no one doubted it was it was much more: an intersectional, multifaceted, pussies-will-grab-you-back march; a screw-your-manipulated-election parade. A counterinauguration for the first candidate to benefit from a Russian intelligence campaign, lose by three-million votes, and still end up, surreally, in the White House. By GLEN RETIEF.

Half a million people descended on the streets of DC, two-and-a-half times as many as had been expected. Worldwide, including in South Africa, more than three-million hit the streets. In Selinsgrove, the conservative small town where I lecture at university, 150 people picketed the post office. In Antarctica, a group of women paraded with “Penguins for Peace” signs.

At the epicentre of the global outpouring, the DC metro system rapidly descended into chaos. In Rockville, Maryland, where our bus dropped us off just after eight in the morning on Saturday, the queue for the ticket machines snaked an hour deep.

DC is an overwhelmingly black and Democratic-voting city. That morning, mostly African-American conductors alternated between cheering and scolding us: “I said all the way to the front of the train, god-darnit!”

Stations near the march were completely closed due to overcrowding. We had to get out a half mile away and walk to the action. Later, on my way home, I stood on the edge of a packed platform and the incoming train whooshed by some 10 centimetres from my left elbow, providing a jolt of pure, heady adrenaline.

But the atmosphere was joyful, celebratory, exhilarating – even eerily so, I sometimes felt, given we were there to mark progressivism’s lowest ebb in a generation, with conservatives now controlling the Presidency, Congress, the Supreme Court, and fully two thirds of state legislative chambers and governorships.

Yet the cheers flew all day nevertheless. Full-throated roars; regular howls of happiness in train carriages, in the parks and streets, in the queues for the porta-potties, on the escalators turned off because they were so tightly packed.

“Yeaaah,” someone would begin, and then everyone was suddenly singing and shouting, “Yeeees!” A powerful, incoherent, and wordless sound, a mass Gestalt moan of rapture for people who hadn’t known, until this moment, exactly what to do with themselves.

And the signs were, as has been noted, delightful. A president may have been inaugurated, but so, clearly, has a Golden Age of People’s Comedy.

Kundera said the one thing tyranny cannot ultimately abide is disrespectful laughter. By that standard, fascism died over the weekend – any notion that the combed-over, ruddy-cheeked One would lead us, Mussolini-like, out of the “carnage” of our superpower hegemony, our houses with unlocked doors, and our historically low, 4.9% unemployment rate.

Ruth Goldman, a media studies college professor from Buffalo, NY, told me she was there to march against the hate and incivility that had seemed so prominent on the campaign trail. This was her first DC march since the AIDS and reproductive rights protests of the 1980s.

A student with me on the bus from Pennsylvania said she thought that if health insurance stopped supporting birth control, it would the be the first step in a fundamental female loss of control of body, self, and integrity.

Eve, a grandmother from the outskirts of Chicago and a retired special education teacher, showed me a picture of her granddaughter, dressed up in a scarlet-fuchsia tutu.

“I’m scared she won’t understand the concept of inalienable rights,” she said.

Indeed, there was hardly anyone at the National Archives on 7th and Pennsylvania, where I took a break from the carnival to go hunting for a nonexistent lunch cafeteria at midday. The ink on the original Declaration of Independence and Bill of Rights, in their secular Charters of Freedom Rotunda, under Perspex, below the marble pillars with their volutes and capitals, was faded to the point of being unreadable, but clear transcriptions were available, and for now the streets outside were testimony to the fact that the documents’ provisions remained energetically in effect.

The lone small group of counterprotestors I saw stood in the region of the Canadian embassy. A man from a movement called “Contradict”, dedicated to the argument that all the world’s religions can’t be true and that Jesus is the true saviour, blasted out threats of hellfire on a megaphone.

“You always have to have one of these types at any liberal protest, don’t you?” said a protestor, looking at me.

And on that day it certainly seemed no one was going to turn any clocks back on sexuality, feminism, multiculturalism, or diversity. As we said in the old days, in South Africa, it seemed as though history was on our side.

It didn’t even matter, for the moment, that the chairs were all empty, now, in front of the Capitol steps, where the inauguration had taken place the day before, with no Republican bigwigs around to witness or respond to our protests.

“Fuck Trump,” said the lone sign, wedged on one of DC’s ubiquitous, pretentious, neo-classical pillars, a kind of final word on the whole proceedings, remaining there long after all the formal ceremonies and the new president’s demagogic speech. DM

Photo: Thousands of people on Pennsylvania Avenue participate in the Women’s March and rally to protest President Donald J. Trump the day after he was sworn in as the 45th President of the United States, in Washington, DC, USA, 21 January 2017. EPA/MICHAEL REYNOLDS