GroundUp: Noordhoek eco estates protect the rich from the reality of Masiphumelele 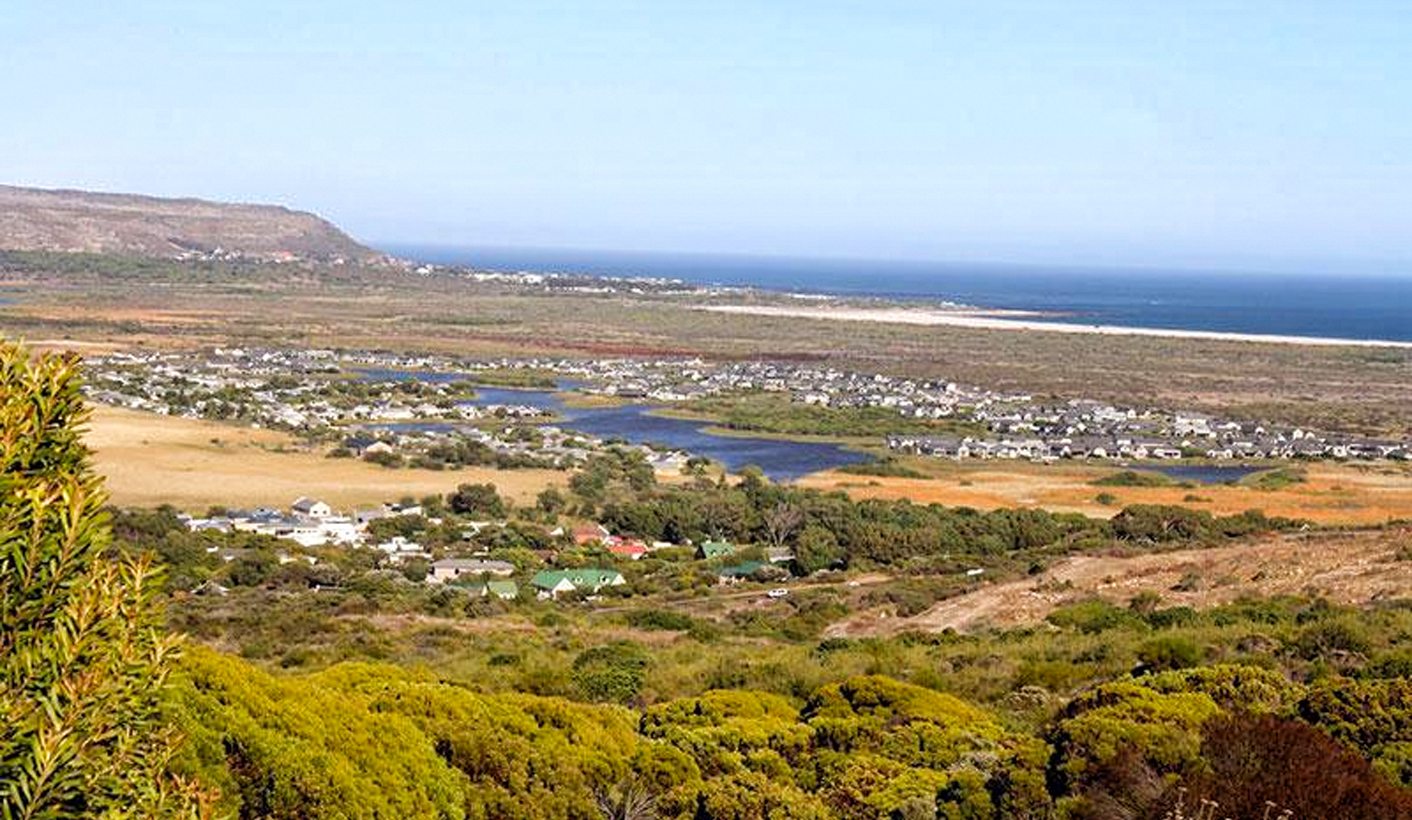 A stone’s throw from the working-class township of Masiphumelele, the Noordhoek mountains are being transformed into exclusive “eco estates” which preserve apartheid geography just as the Group Areas Act did, write Bruce Baigrie and Henrik Ernstson for GROUNDUP.

It is impossible not to notice the construction of Chapman’s Bay Estate as you drive into the Noordhoek Valley along Ou Kaapse Weg. Splayed out over the mountain slope beside the road, it boasts stunning views of mountains, beaches and the suburbs of Noordhoek and Fish Hoek. Wetlands glimmer, some with a fence around them, incorporated for the exclusive use of the estate.

Further down the valley, in the largest wetland, the entire body of water has been surrounded by the luxury estate of Lake Michelle and made inaccessible to non-residents. Westward and across the valley, other estates stretch along the slope of the mountain, with more construction continuing.

The sheer scale of Chapman’s Bay Estate has drawn three private developers together, including a family trust. Greeff Properties, an affiliate of Christie’s International Real Estate, manages the sales, describing it as another of its “most luxurious and exclusive mandates in the Western Cape”. Future residents, who will pay between R3.5-million and R6.8-million for a property, will enjoy a set of newly built amenities.

In late 2015, a Virgin Active gym was inaugurated as part of a new shopping mall, which also boasts of its green credentials. Both the gym and the mall feature as incentives in Greeff Christie’s promotional video for the estate, which conspicuously only shows white people, smiling individuals and families, doing activities associated with “the lifestyle that comes with Noordhoek”. As if it wasn’t clear already what demographic is desired and expected to live here, the video continues with animations of what it could be like to walk around and live in these houses, again only showing white people.

That the estate is intended to exclude is clear. On one of our visits in November 2016, two workers from the security company Innoza are running cabling along the bottom of the 3-metre high perimeter fence. CCTV cameras are being placed on even higher poles to produce live video linked into the guardhouse at the main gate.

For the private security industry as well as the banks and the developers, these estates are lucrative.

The development of the estate, originally known as the Dassenberg Residential Estate, has not been without controversy. Opposed by local civic and environmental groups, the initial application was turned down in 1997, only to be approved by a former ANC MEC Pierre Uys in 2009, during the dying days of his term of office. The new Democratic Alliance MEC, Anton Bredell, declined to challenge the approval, and after initial resistance to a rezoning request, the DA-led City of Cape Town abandoned its opposition, much to the dismay of residents of the area, and despite the province’s Planning Advisory Board stating that the development should have been “drastically scaled back”.

Residents of the Peninsula and the wider Noordhoek valley now seem to have grudgingly accepted the development, though 20-year-old Shelby, who spoke to us from Sun Valley in November 2016, laments the loss of access to her neighbouring wetland and mountain. The mountainside that her family’s home looks onto has been cleared, while most of the wetlands are sealed off by stainless steel and electric fencing.

These “eco-estates”, often on pristine land lying outside the urban edge, represent a deeply problematic pattern of urban development in South African cities. With sustainability as a paramount goal, how do we understand the social and ecological effects of this type of development?

Sustainability is about a connection between ecological processes and social justice. Chapman’s Bay Estate only glaringly omits any such connections. Rather it exploits “green” arguments of sustainability into its sales pitch. This is clear in another video at the estate’s website. The lead architects from the local practice, Lennard & Lennard, proudly proclaim the “symbiotic relationship” that their design has created with the surrounding vegetation, but they omit for instance the destruction of vegetation and animal habitat that their design requires, and the way a once publicly accessible mountain slope is now fenced in. Surely this should be part of any truthful use of “eco” as in ecological?

The sales pitch also does not mention how the “eco estate” consumes a lot of space and only provides housing for a few people, increasing the city’s footprint with low-density housing. The perimeter fence will eventually encompass 145 houses or “units” on a 45-hectare plot (only phase one appears to be complete). This means only 13 people per hectare if we assume four people in each “unit”. In comparison, fellow citizens in Masiphumelele, with around 17,000 residents in 2011 on 45 hectares, live with a density of 416 people per hectare – 32 times higher. High density and integrated housing development is crucial for Cape Town’s wider sustainability, but in its promotional video, the “eco estate” turns low density into an argument to serve its sales. Future residents are promised they will “really have that feeling of space” around them.

The Chapman’s Bay Estate’s green credentials are certainly questionable, both in real material terms, and in the way the self-justifying language of conservation and ecology glosses over and waters down environmental and social justice arguments.

But beyond that, these “ecoestates” also serve as cogs within a wider machinery.

On one hand they reproduce exclusionary apartheid geographies. Using green-washing as part of the process, so-called market forces reproduce spaces just as the apartheid-era Group Areas Act once did, leaving behind residents of townships such as Masiphumelele.

The township of Masiphumelele (bottom), where metal shacks use what little space is available, is often described as encroaching on the wetland’s edge. In contrast, the Lake Michelle estate (top), which is completely built within the wetland and appropriating its heart, figures less in analysis of wetland problems. Aerial photo extracted from City of Cape Town maps.

Eco estates, the merging of nature with social exclusion, seem also to tap into a settler colonial mentality which dates back to the early 1800s and is difficult to stamp out in South Africa. Back then, the private garden – and, later, botanical gardens and game reserves – displayed settler identity and evoked a sense of accomplishment and home with the planting of European species imported to domesticate the “wild” African landscape. Fast-forward to today’s eco estates where indigenous landscaping has become popular and replaced European exotic plants”and which offer a tempting lifestyle choice for the rich: You are not simply buying a house, but you also protect nature.

But we cannot simply see these eco estates in isolation. Rather, they form part of a wider appropriation of urban spaces by the elites. Authorities, finance capital, architects and security companies are providing exclusionary spaces where elite and largely white top earners can live out what South African and British human geographers Richard Ballard and Gareth Jones have called a geographical escapism, a highly selective interaction with the surroundings.

Moving from their securitised homes to spaces of elite consumption built on their behalf, such as the new shopping mall and the Virgin Active gym complex, they are cordoned off from a wider social geography. This renewed “settler public sphere” makes invisible the wider reality of a country and neighbourhood of deep and racialised inequality. Cushioned by a sense of environmental stewardship, residents can ignore the wider reality at their ease.

The Chapman’s Bay Estate, dressed up in artificially planted fynbos on previously undeveloped land, is part of a deeply troubling post-liberation urban development pattern. Part of our motivation for examining this particular estate was to learn how this happens. These exclusionary spaces and the connections between them are not simply “springing up” as if by chance, or as a “natural” consequence of things we cannot tackle. There are identifiable actors, agencies and institutions involved in their fabrication – from banks, municipalities, government agencies and environmental consultants to architects and landscape architects who are using their knowledge, skills and “green touch” to produce these estates.

We need to work out how we can use our democratic institutions for more inclusionary urban development where sustainability and ecology is tightly wedded to social justice. We need to follow the lead of so many skilled organisers, activists and scholars of this country, recently under the banner of Reclaim the City.

The way our cities emerge is not set in stone; what seems “natural” can always be contested and ultimately changed. DM